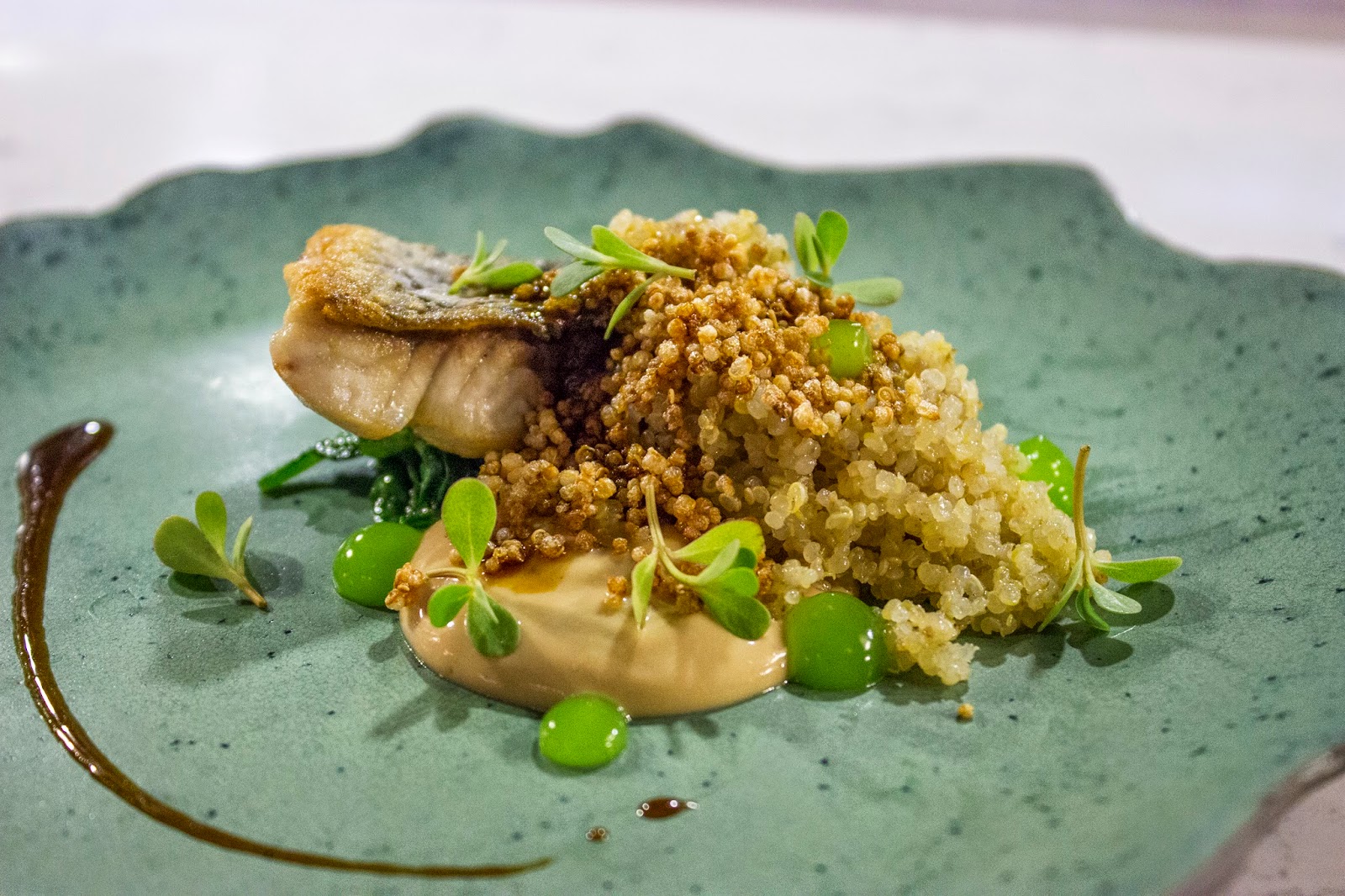 When it comes to eating out in Singapore, there’s a vast variety of options at your fingertips spanning from cheap street eats, funky mid-range eateries and fine dining venues. More often than not, my holidays there involve humid and hot days spent in the markets, my hair tied back so it’s not falling into my bowl of noodles, one hand kept clenched around a perspiring lime juice.

This time around I recently spent a whirlwind four days in the city thanks to Chowzter, an organisation which describes itself as a global network of the world’s most celebrated food experts and writers, all searching for the tastiest Fast Feasts on the planet. I’m really honoured to say that I’ve recently been invited to join their team as the Perth Chief Chowzter and as a result found myself being whisked over to join the rest of Asia’s Chowzters for the Tastiest Feasts of Asia Awards 2015. 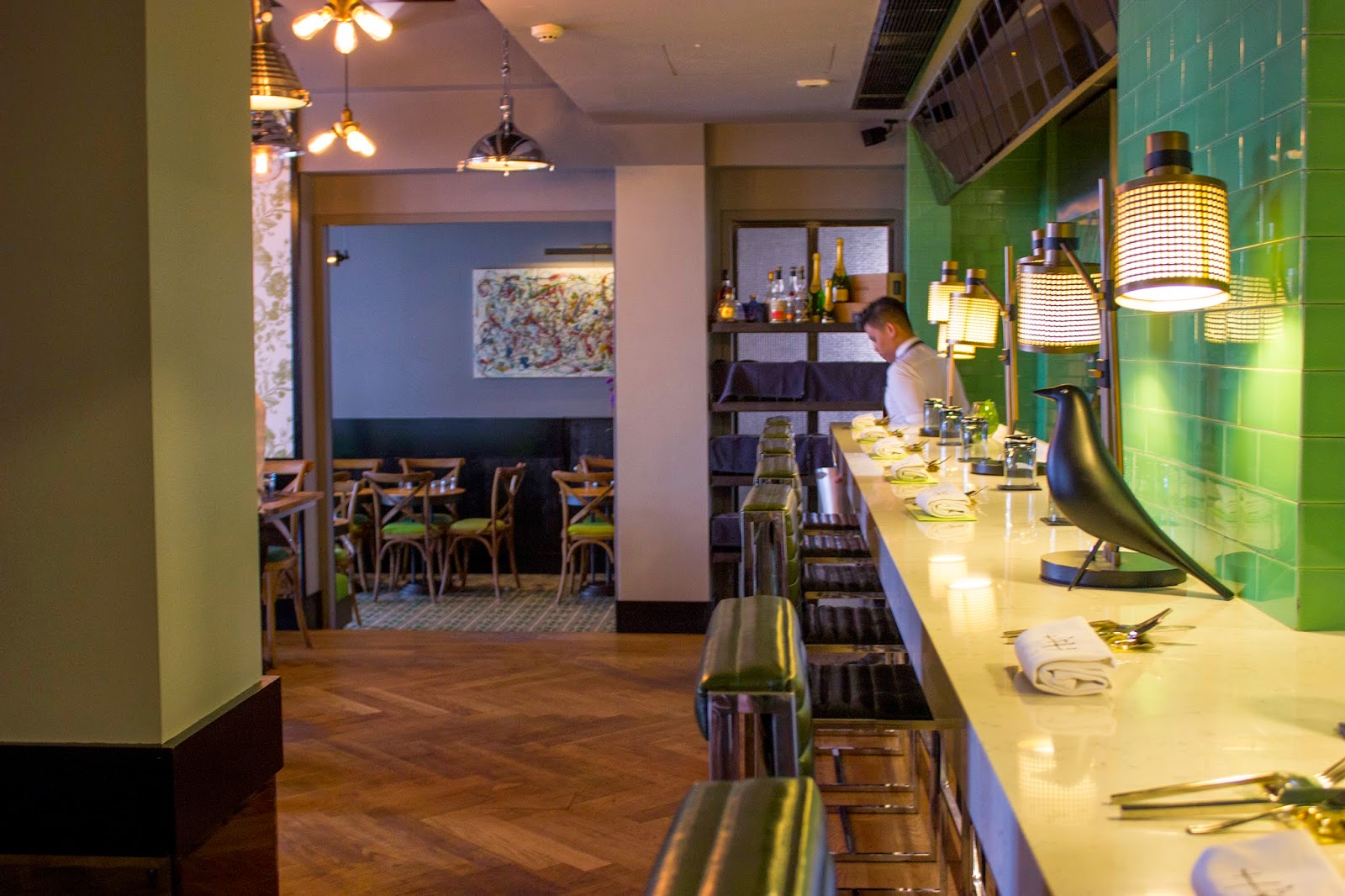 The entire trip was a series of food feasting, focussing on the best the country had to offer. But on my final day there, I found myself free from plans, hours away from jumping on a plane. And I knew that  although I’d basically already consumed my body weight in food in the previous days, I was extremely eager to try a restaurant there called Tippling Club after hearing some fellow Perth foodies (foodstagrammer Perth Eats, fellow blogger Laura Mosley and the hilarious team at The Classroom/Lucky Chan’s) rave all about it.
I arrived at 12pm on the dot knowing this was their opening time for Mondays, and that I was taking a big risk with no booking. Especially since it was the day of the Asia’s 50 Best Restaurants Awards and there would be hoards of international food connoisseurs milling about. Luckily for me I managed to literally scoop up the last seat at the bar which cemented in my mind that this was definitely the right choice for my final Singapore meal. 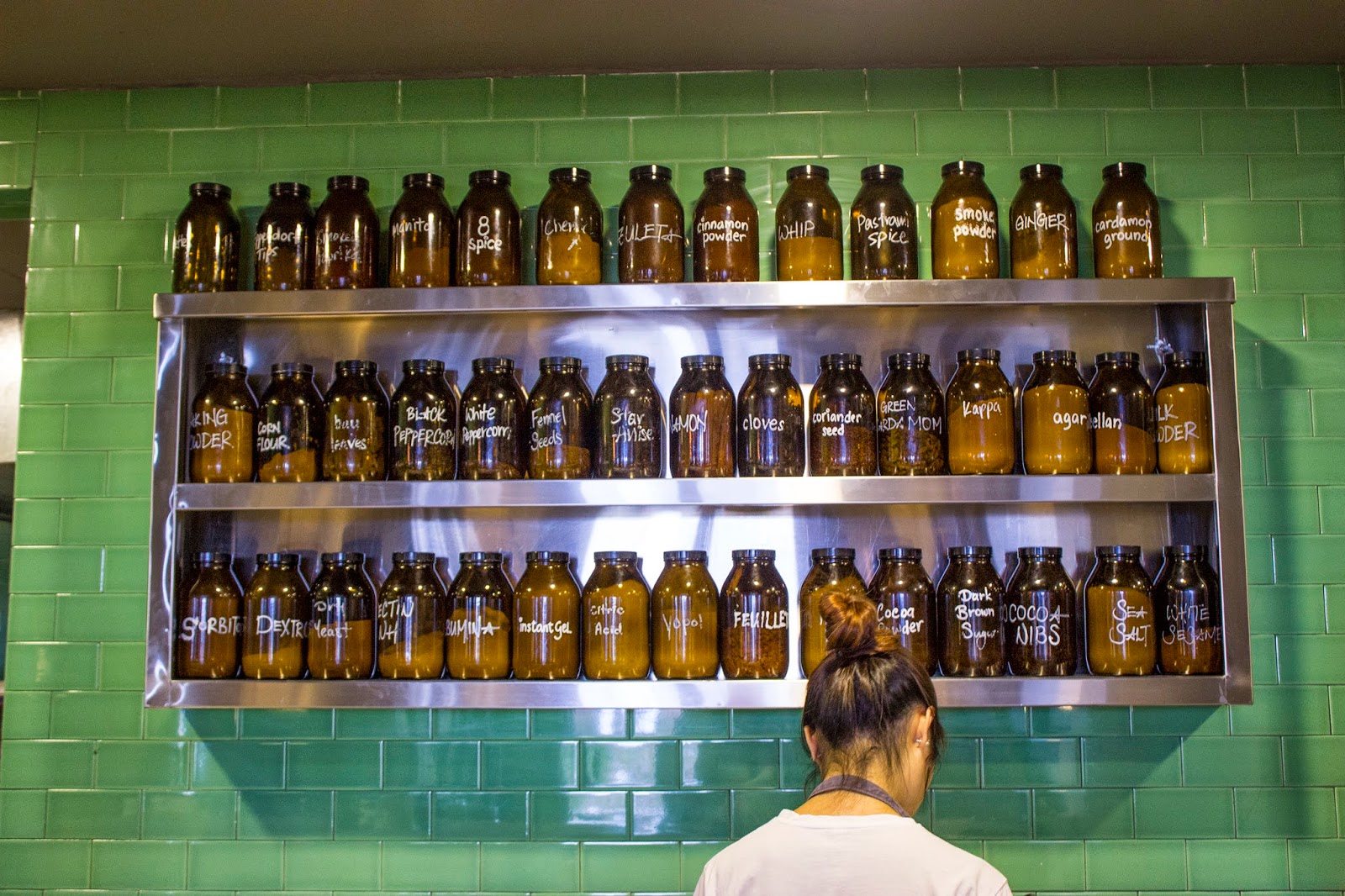 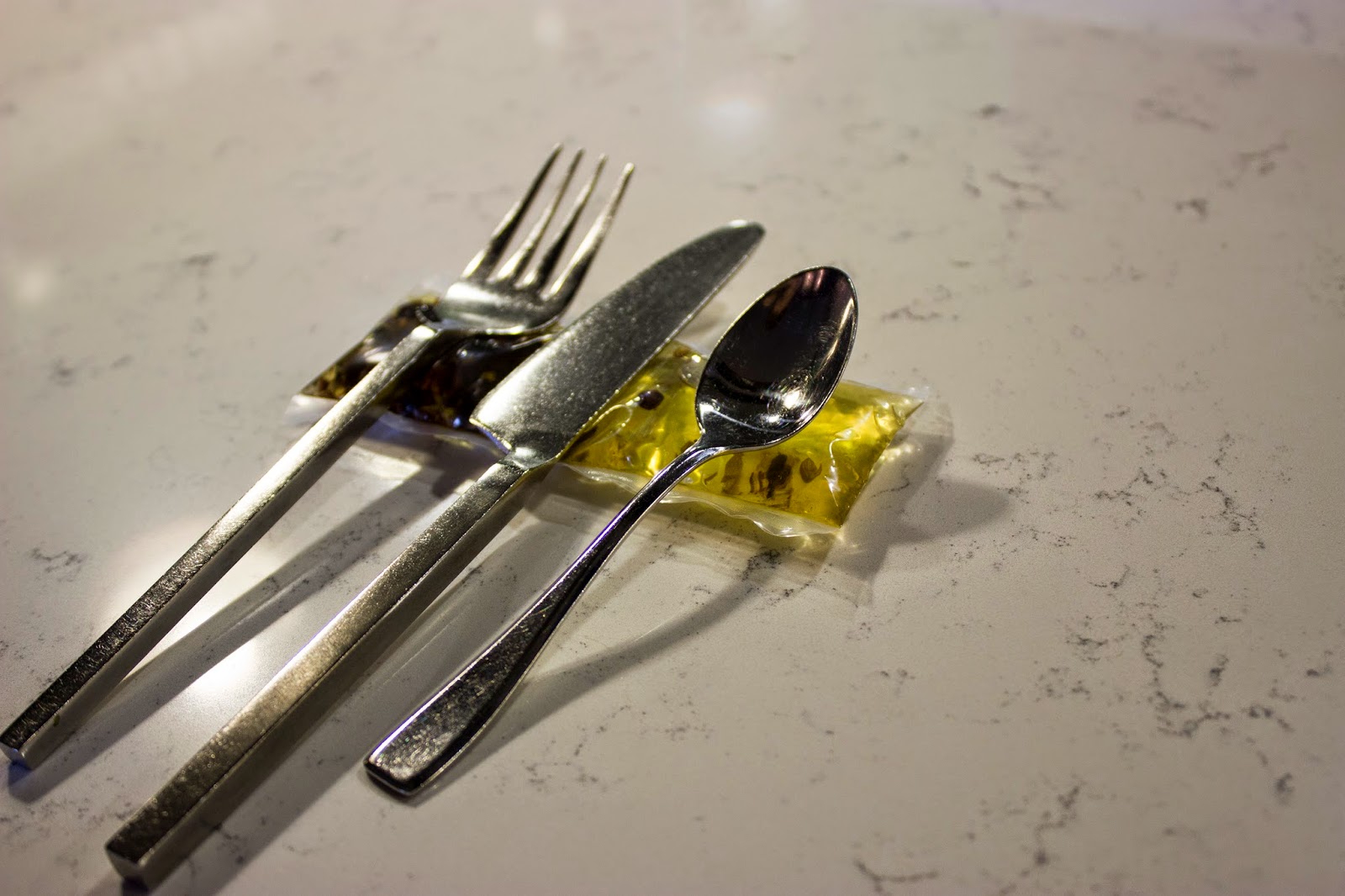 As I sat down I was pleased to note that I could see straight into the prep station and kitchen, which was a great way to keep me entertained during the meal. Choosing what to order really came down to deciding which dining option I wanted to go for – an express 3 course meal, a more adventurous 5 courses, the next step of 7 courses and then the epic 12 course experience. Since I’d basically been eating non-stop since arriving in Singapore I decided to reign in my greedy behaviour and chose the five course lunch at $90 (excluding tax).

Once I’d placed my order I browsed through the cocktail list, my eyes immediately drawn to the ‘bubble tea’ ($18.00) – melon & mangosteen infused gin, citrus, apple. I love gin based drinks (that’s my jam!), so this was right up my alley. I placed my order and waiting eagerly for my meal to unfold. 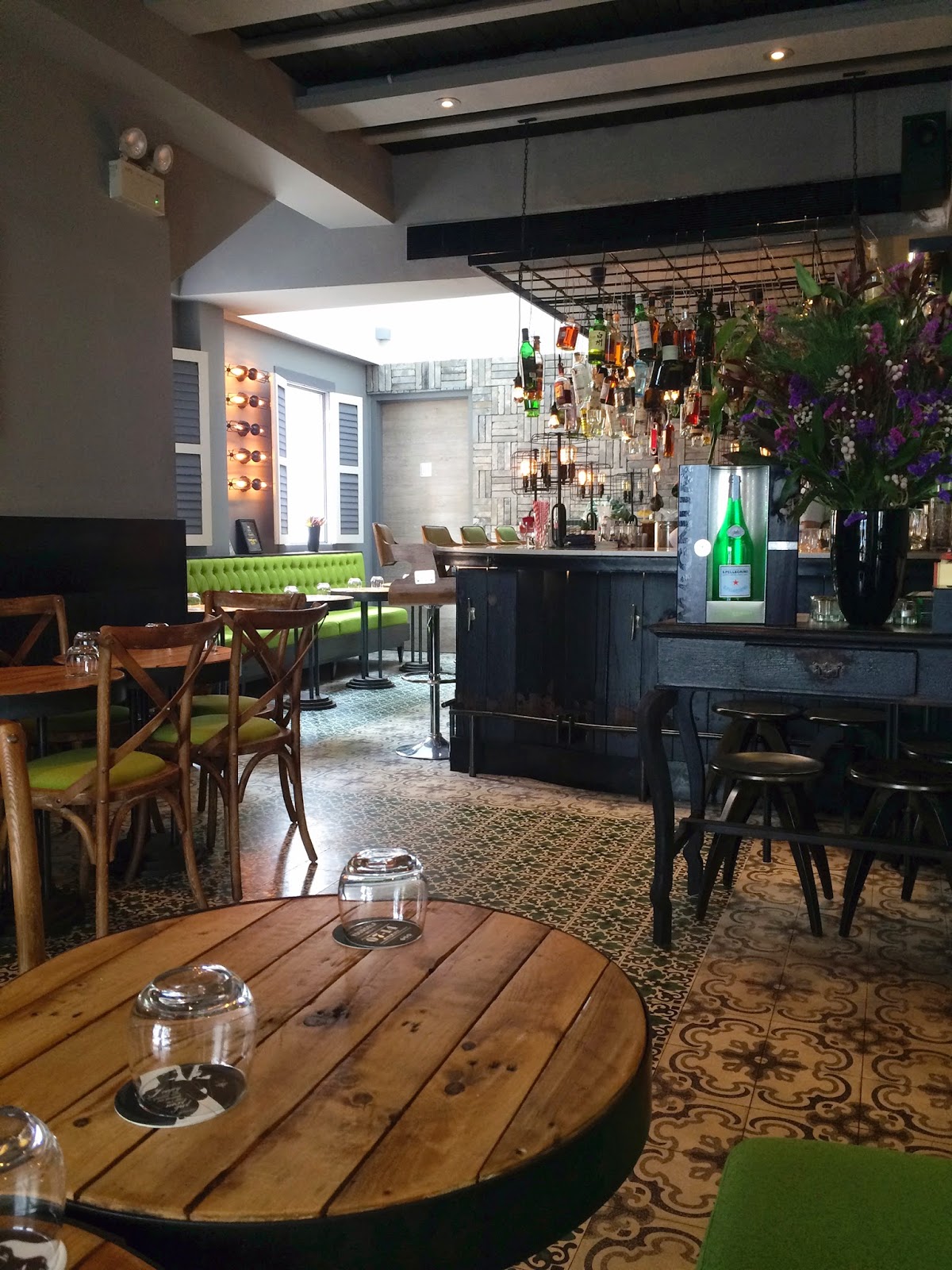 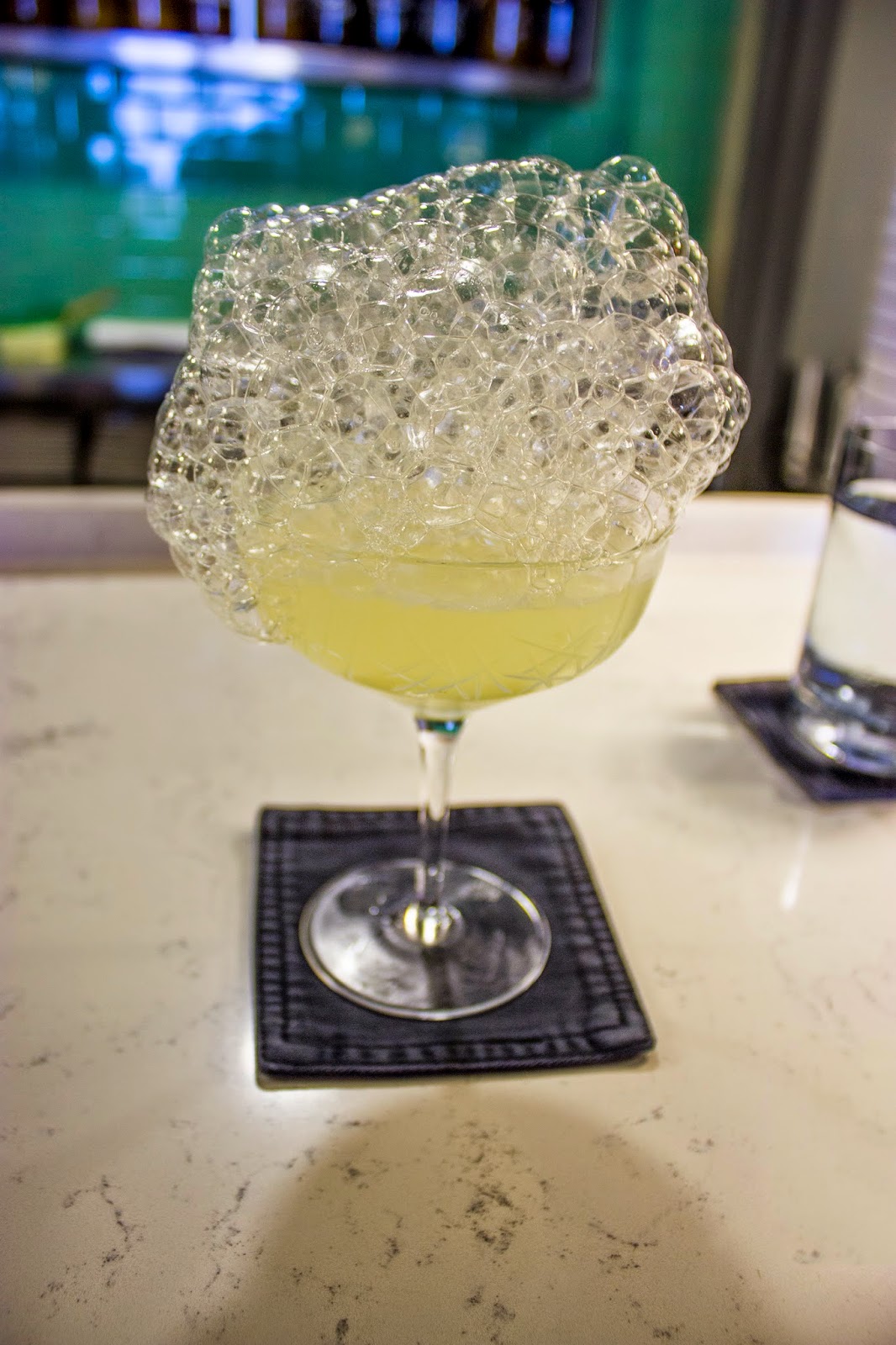 My cocktail arrives and is delightful and well-balanced, the flavours sour but still refreshing. I found the plethora of bubbles on top really playful though they did pop a bit on my face as I tried to dive into the drink. A straw might have been a more effective way to drink this, though at the end of the day I really enjoyed it!

After I finished it I really wanted to order another – that’s how much I liked this. I’m actually still remembering it now as I write this up, and that’s definitely the mark of a great cocktail. 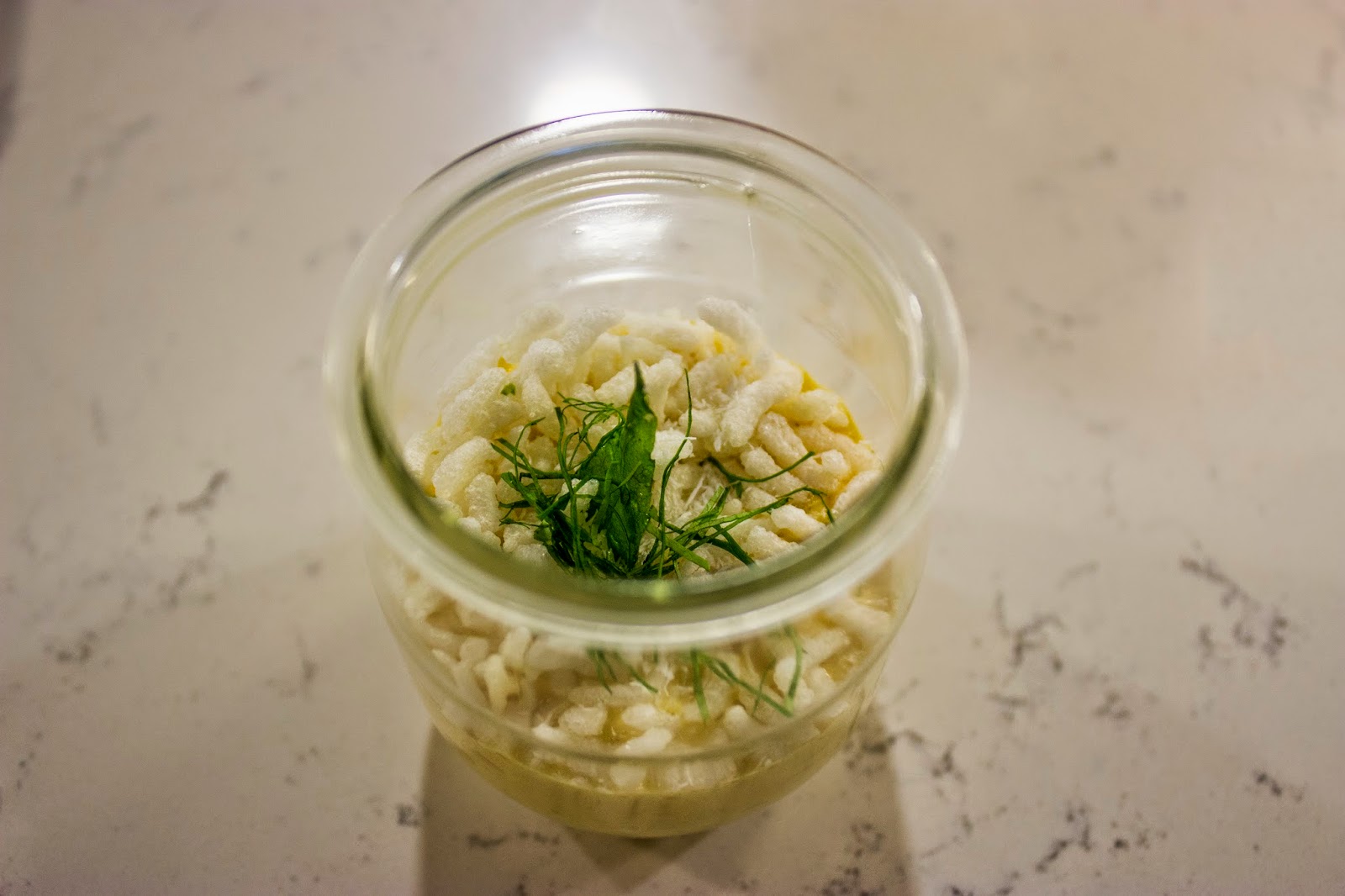 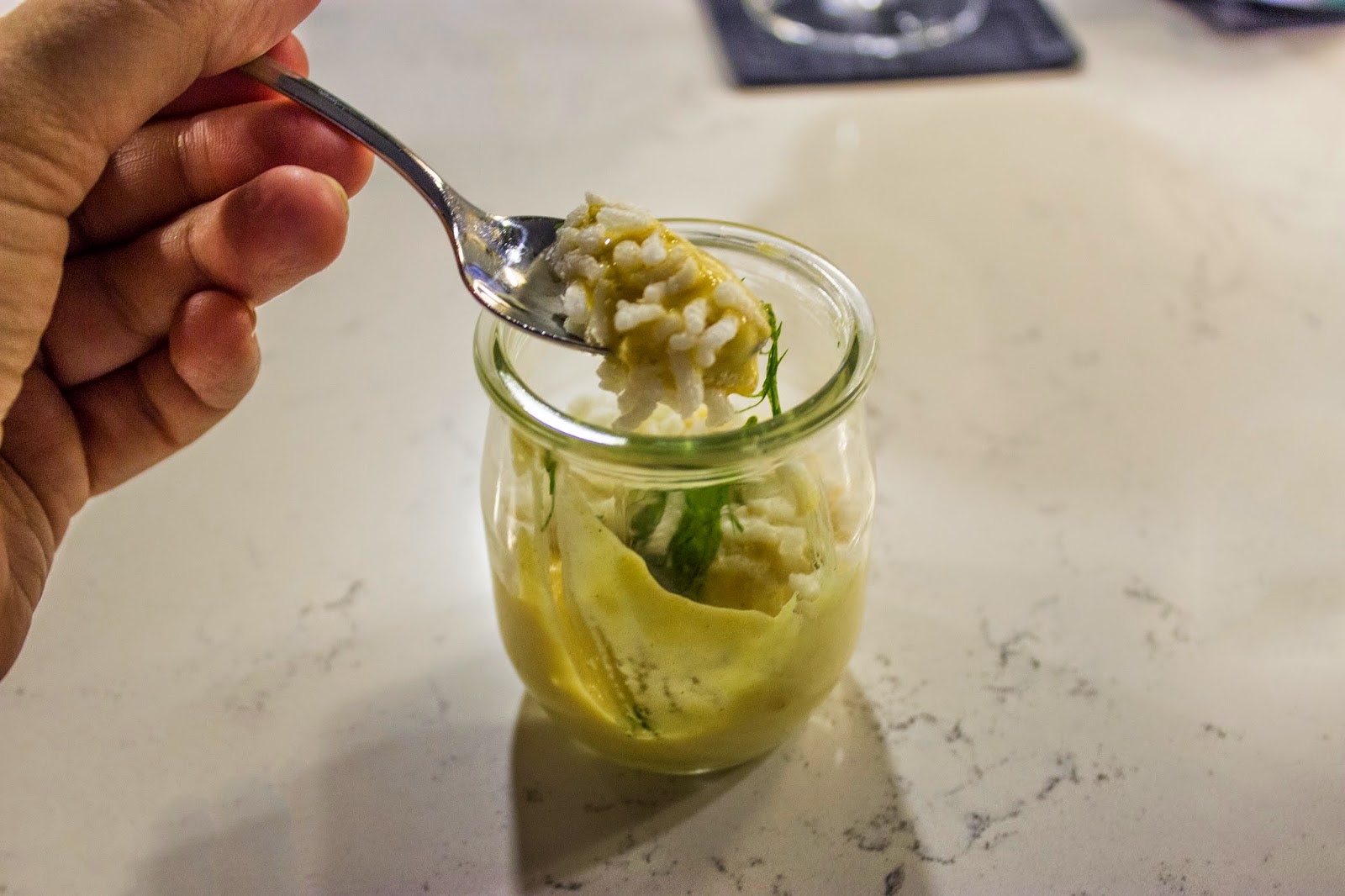 When the food portion of the meal began it started with a bang, and a playful nod to the hosting country.  A small jar with Chef Ryan Clift’s rendition of a Singaporean curry with crisp puffs of rice and fragrant herbs. It’s extremely flavoursome and creamy while staying light.

With my first bite I immediately can see why Tippling Club is one of the country’s most esteemed and revered restaurants. But I think knowing that the Chef Clift was previously the Head Chef of Vue de Monde in Melbourne, plus has worked with Marco-Pierre White, Peter Gordon, Emmanuel Renaut, Shannon Bennett, and Raymond Capaldi, there was never any doubt that I would love the meal that would unfold. 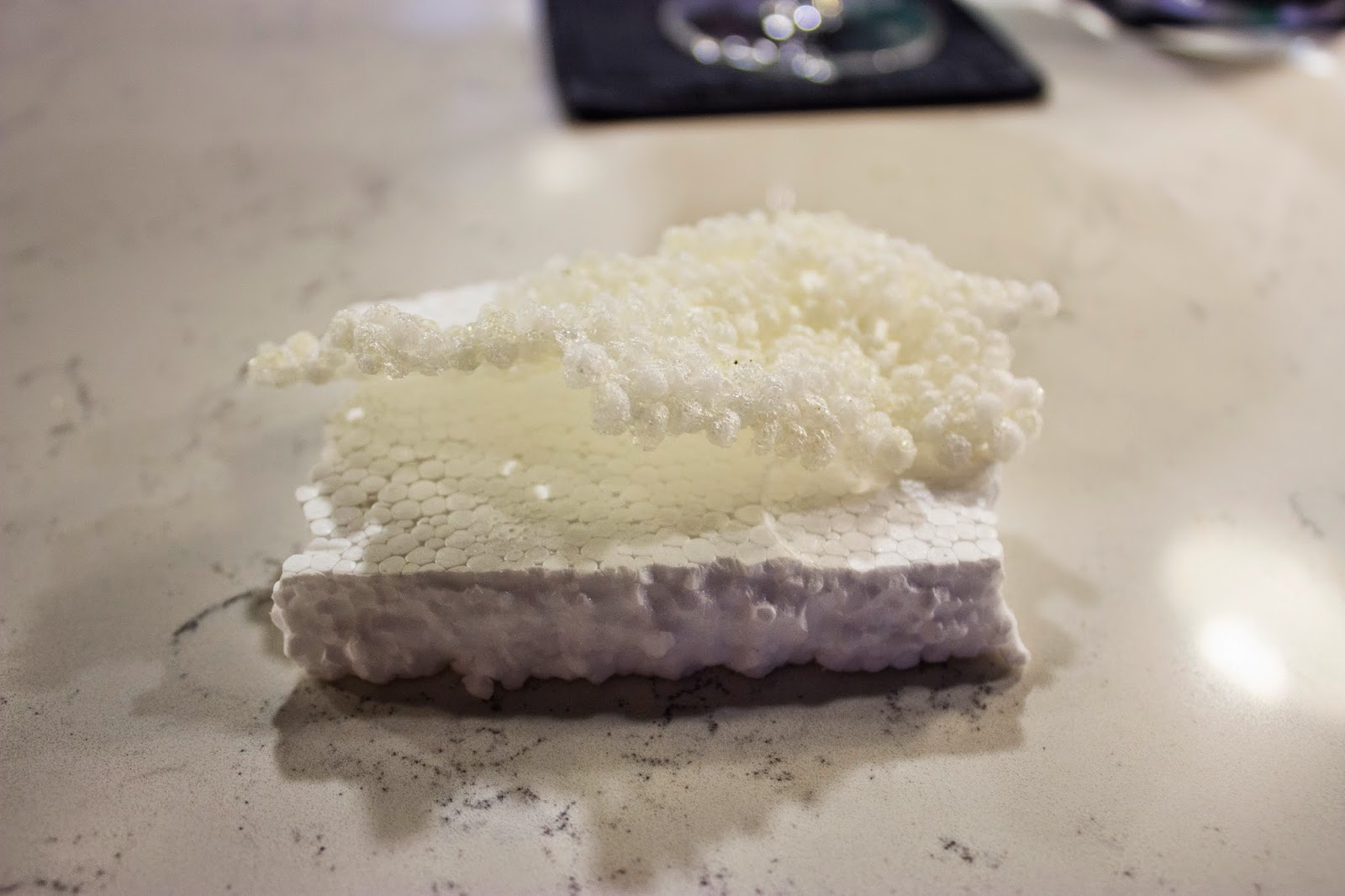 The next snack to come out is served whimsically on a piece of white styrofoam and is titled accordingly. It’s a light crisp, slightly seasoned and flavoured with white truffle oil.

I love the satisfying crunch noise that emits as I bite down, the rich and earthy truffle flavour plucking at the strings of my tastebuds. It’s a very simple snack, but am a truffle fiend, this is something that greatly appeals to me. 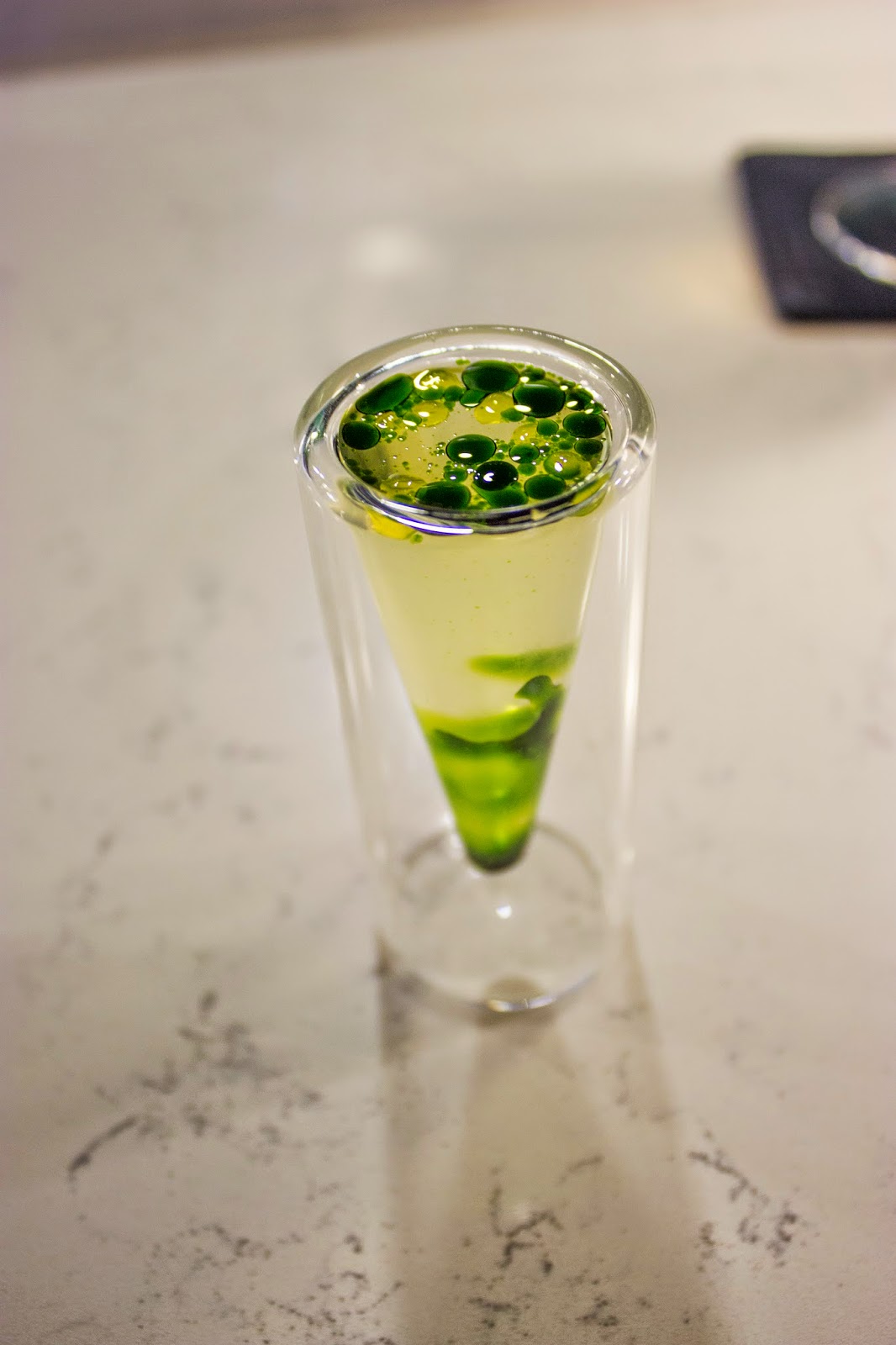 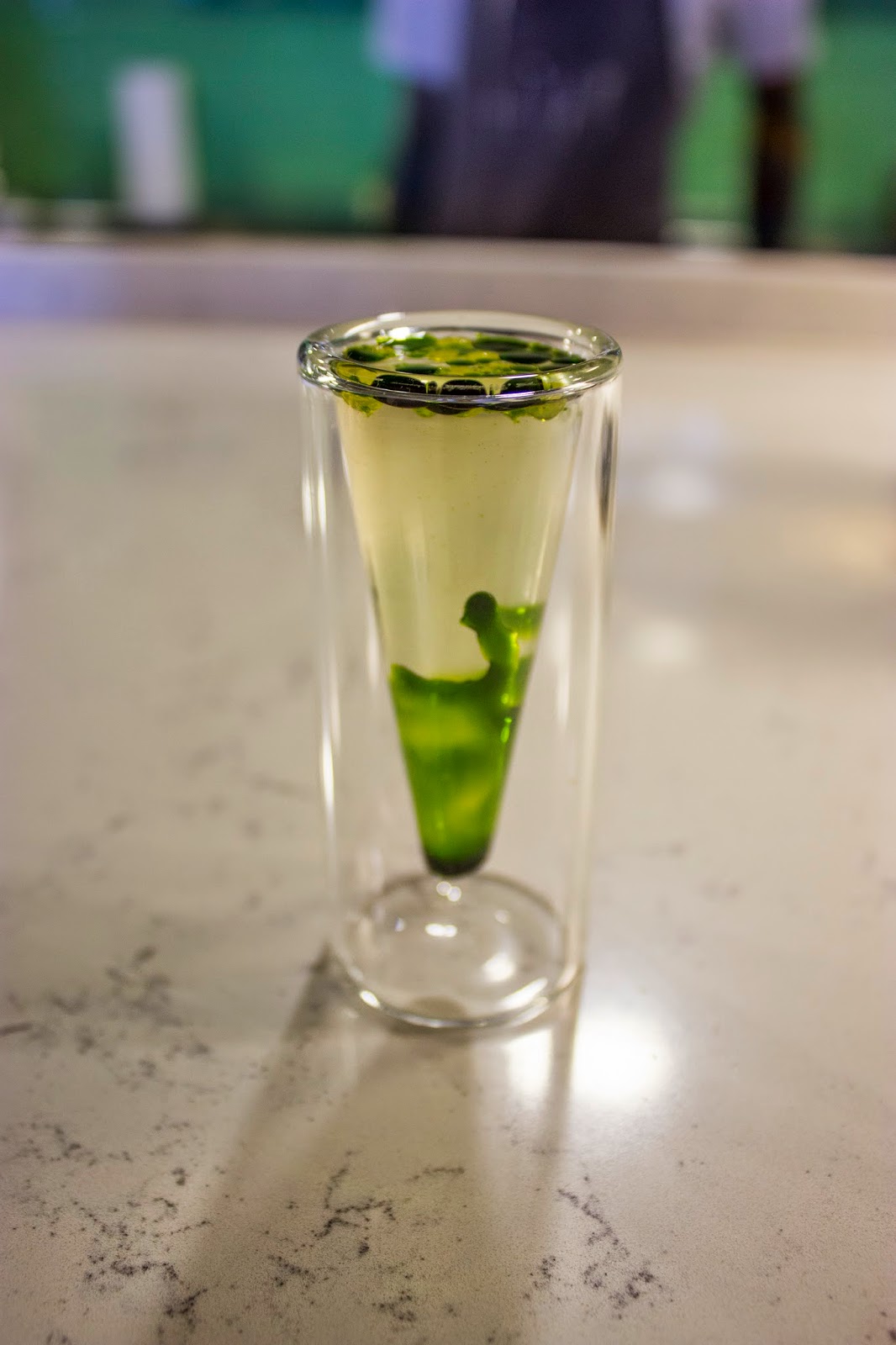 The final snack is referred to as a ‘lava lamp’, a cold and refreshing soup with basil, tomato and olive oil. I love watching the liquid in motion as the different layers slowly rise from bottom to top. It’s a beautiful mouthful and mesmerising in it’s flavours, and I savour the strength of the sip.

I know these days molecular gastronomy is a bit of an expression of the past, but this dish felt like the modern day interpretation. I loved it. 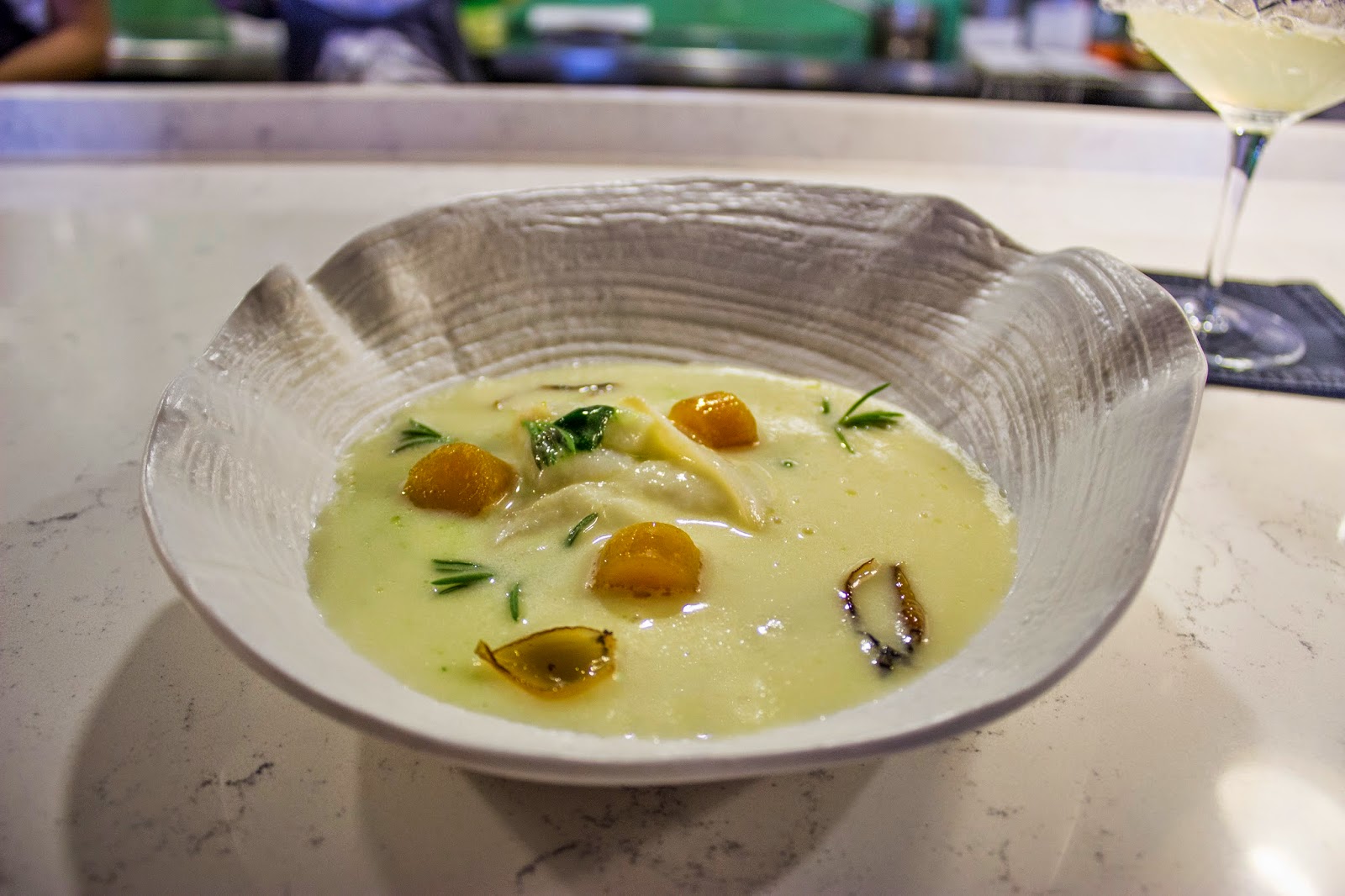 After the snacks there’s a small break but soon enough my first official course is presented. It’s a confit bacalao (dried Spanish cod) with confit onions and sweet potato, herbs and a potato and leek soup. For me, this was my favourite dish of the meal even though it’s so unassuming.
The soup is creamy and flavourful, silky smooth. I love the soft, toothsome sweet potato and the caramel onions that melt in my mouth. The cod is lovely – tender, flaky and perfectly seasoned, the flavour enhanced by the soup. I could happily have polished off a few more bowls of this and left extremely satisfied. It definitely has put all other potato and leek soups to shame! 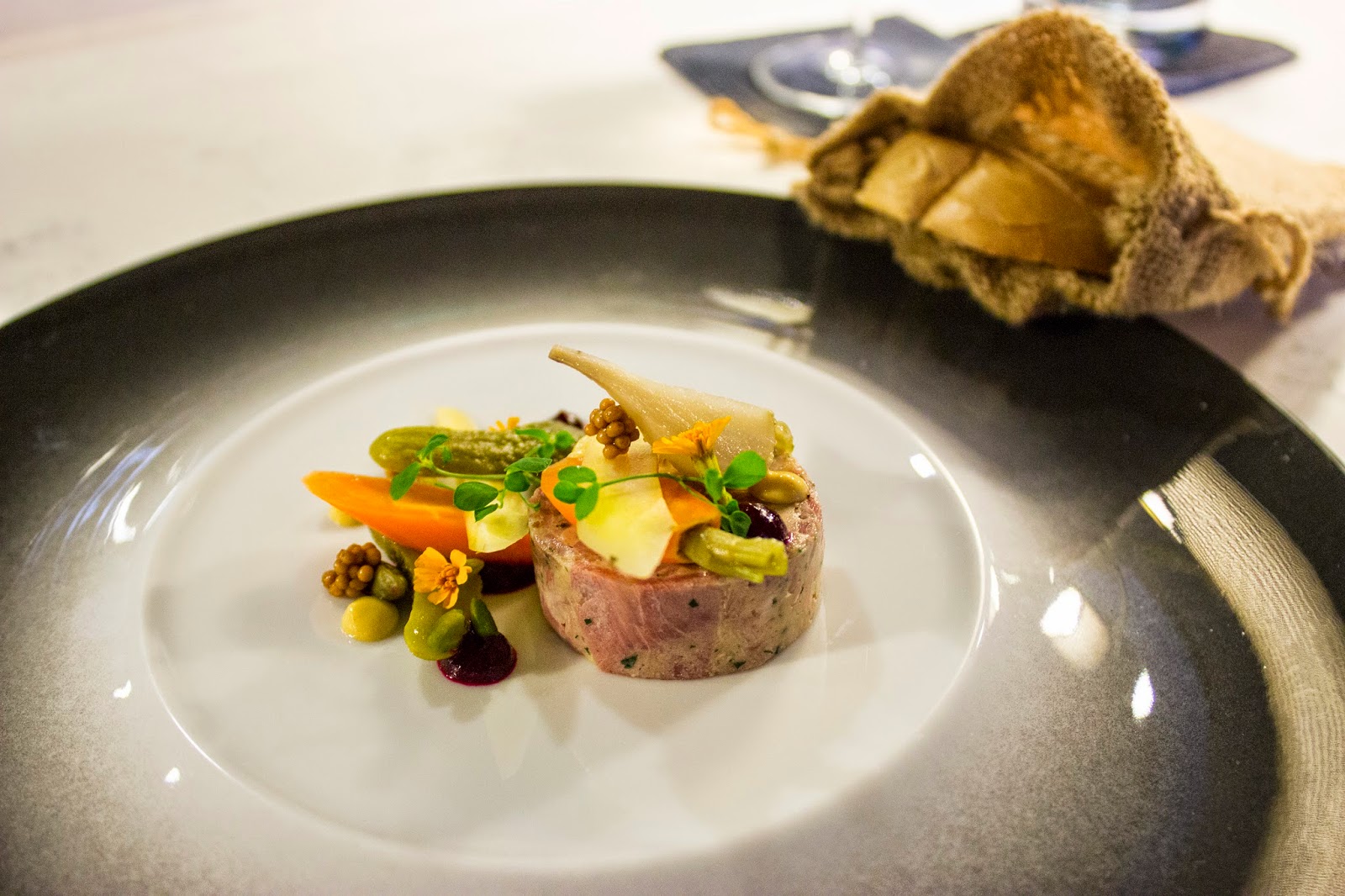 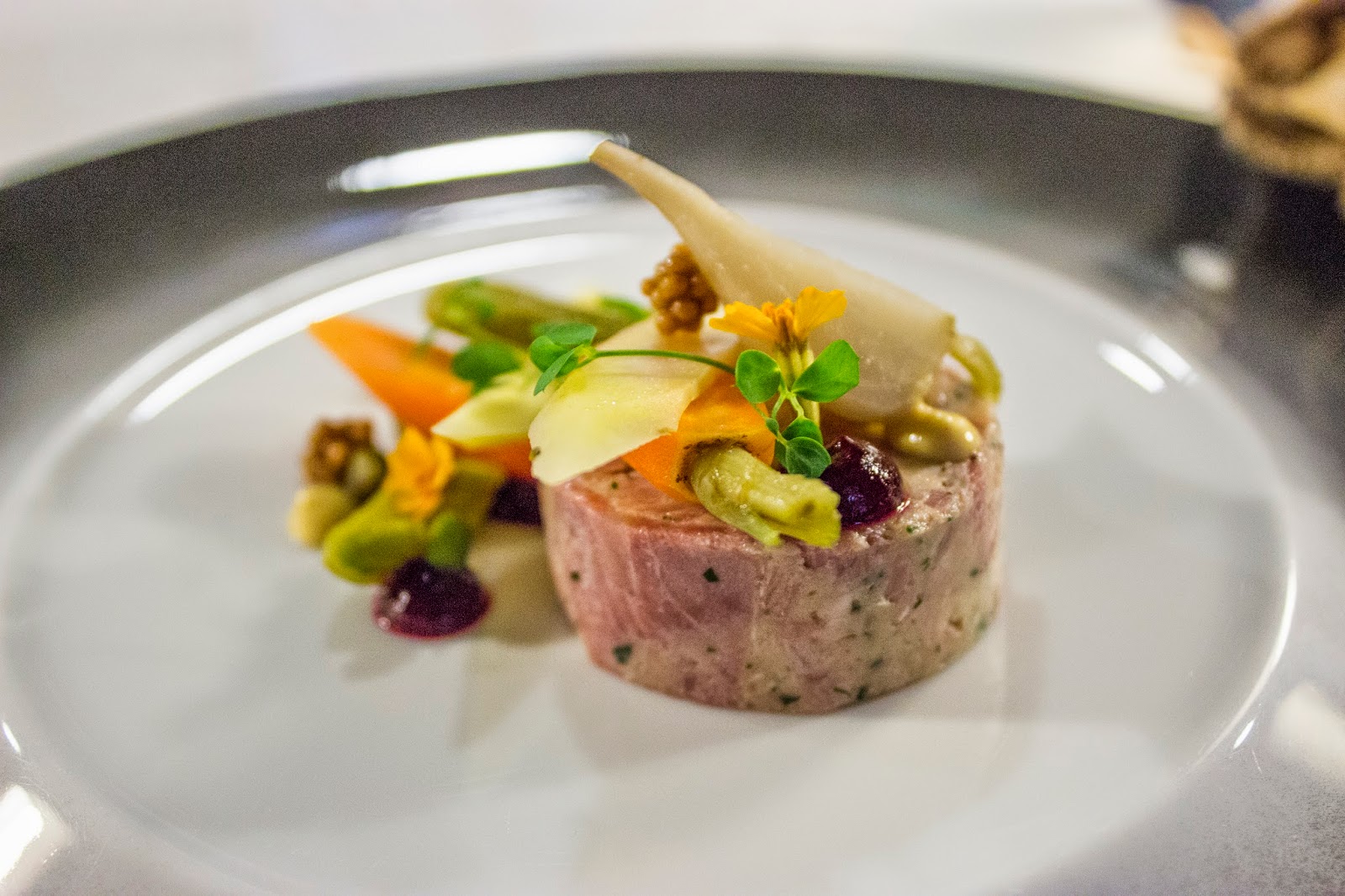 The second course is a ham hock and foie gras terrine with beetroot puree, pickled baby vegetables, mustard and toasted sourdough bread. I love the presentation of this dish – modern and intricate without being overplayed. The bread comes out in a woven bag, the heady fragrance of the toast wafting out as I remove it.
My boy is a big fan of terrines and while I enjoy them, they’re not something I often gravitate towards when it comes to ordering. But if all terrines tasted like this then I would be singing a very different song!
The terrine is well packed, the foie gras decadent. The piquant vegetables are a great addition, the acid cutting through the creaminess. I am one of those people who obsesses over mustard, so the inclusion of it on this plate was wonderful – the grains of flavour bursting in my mouth. It was just plain delicious, and the perfect amount to accompany the generous slice of bread. 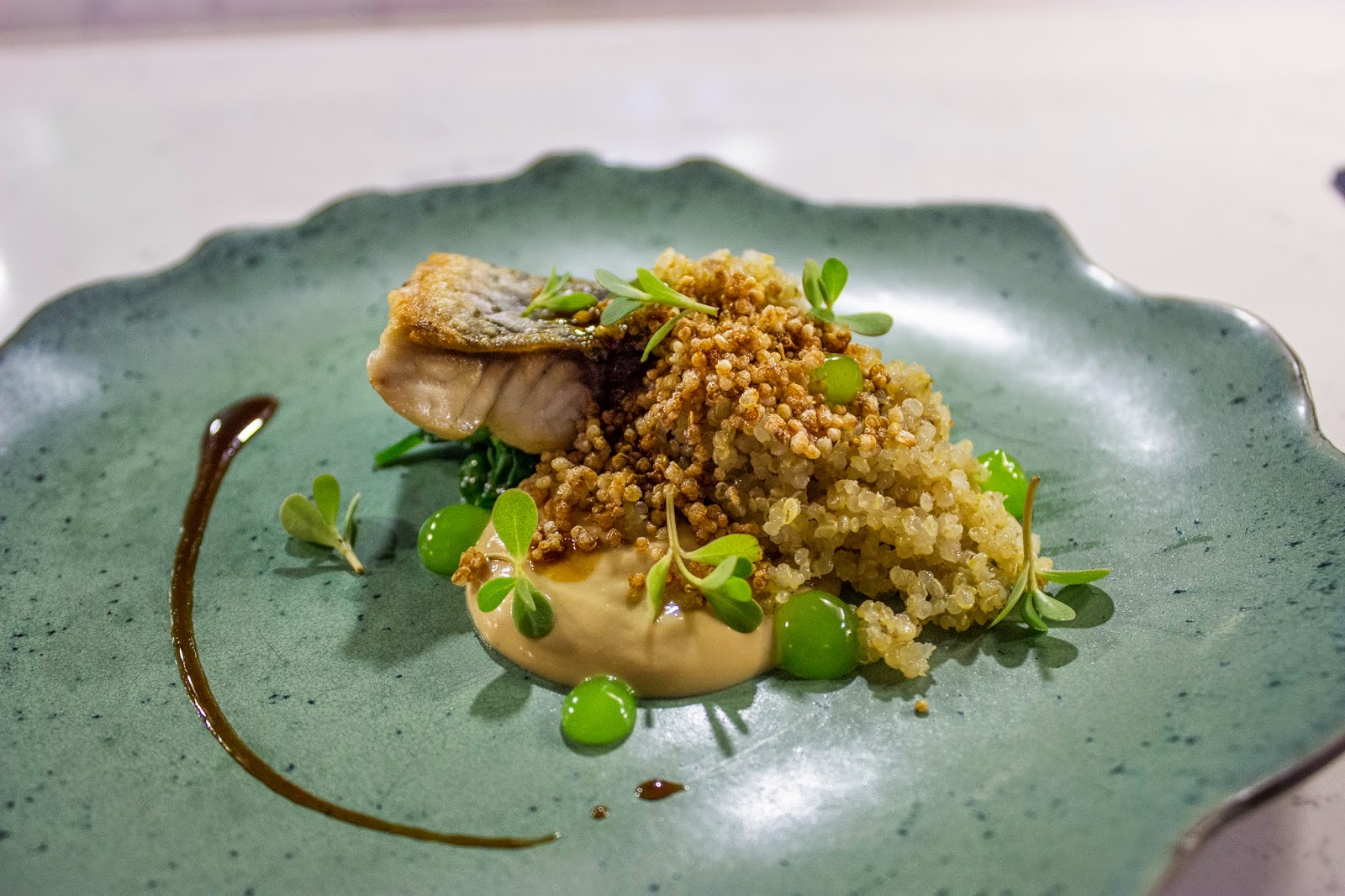 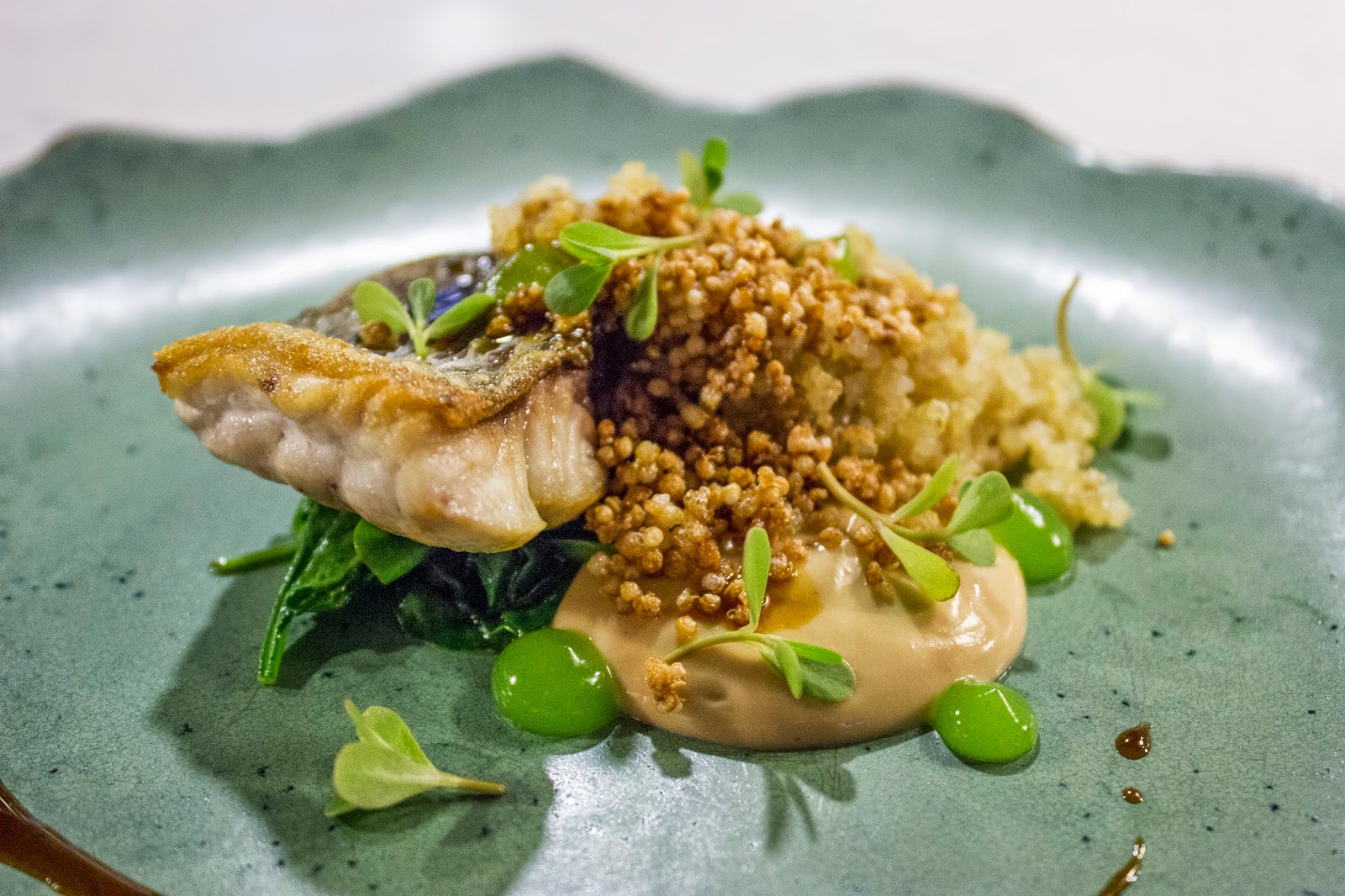 The next course was a beautiful plate of locally farmed grilled barramundi with smoked yoghurt, greens and quinoa. First up let’s give some props to the gorgeous plate they used in this dish – I so wanted to smuggle it out of there with me!

But then more importantly the food. The barramundi was cooked perfectly, the meat steaming as I gently flaked it apart with my fork. The skin wasn’t as crispy as it looked sadly but I was provided an alternate crunch thanks to the little puffs of quinoa. The creaminess of the yoghurt really elevated the other ingredients and brought the whole dish together. 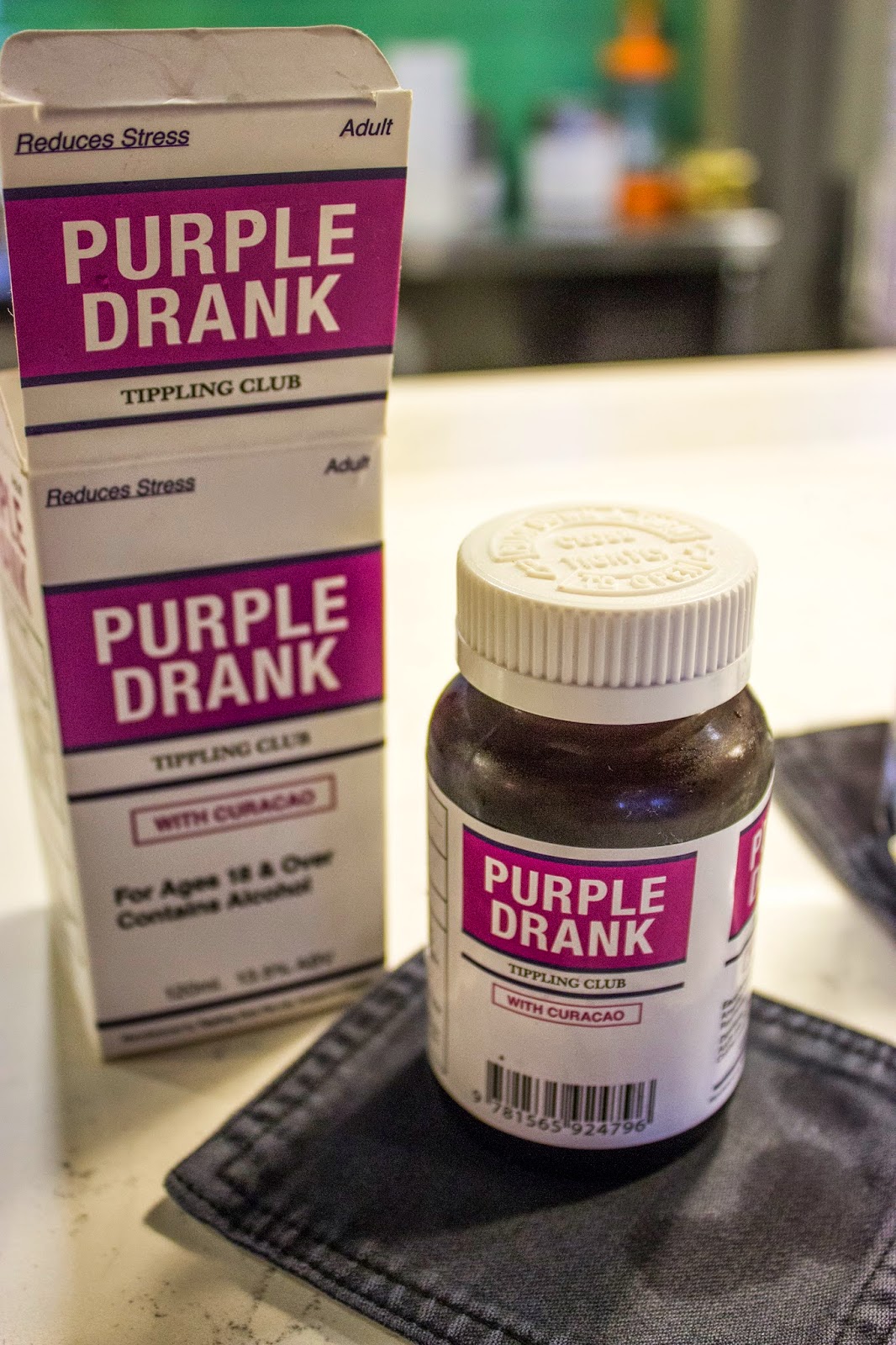 Around this time I decided it was time for another cocktail. That’s the beauty of Tippling Club, it’s designed to be a food and cocktail feast for your senses – so I wasted no time even considering wine. While I would have happily indulged in another bubble tea, I thought it was best to try something else and opted for the cocktail hilariously titled, ‘Purple Drank’ ($23.00).
The presentation is so quirky! It arrived in a medicine bottle, completely branded and encased in card packaging too. Once again they’re showing their playful spirit and I was all too happy to embrace this. The cocktail is sweet and tasty, comprised of vanilla & raisin spirit, curacao, candy gomme, raspberry and citrus. It’s delightful, though I do prefer my first cocktail over this – I do like my sour flavours a bit more than my sweet! 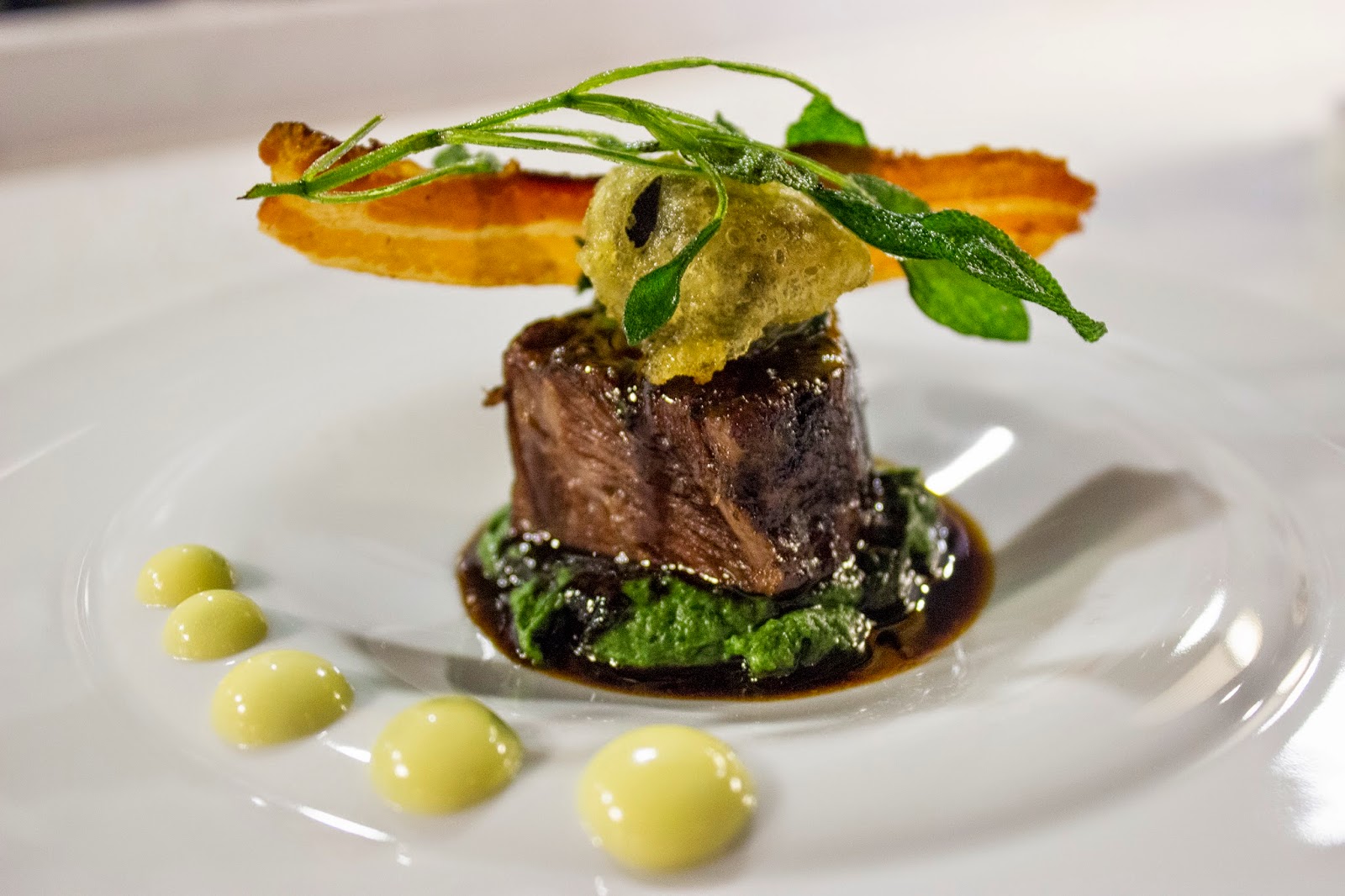 Next up was my final savoury course for the lunch – and by this point I am really starting to feel the pinch! The servings here are deceptively filling and though I’ve enjoyed every bite, I’m struggling a little.

The 48 hour braised wagyu steak sits atop of a puree of parsnip and herbs which is surrounded by a lovely jus. These’s a crisp wafer of bacon balanced on top with a fried garlic snail and dots of béarnaise sauce on the side.

I think sometimes in hindsight we throw around foodism expressions like ‘melt in your mouth’ a little too easily. Don’t get me wrong – I always believe in what I say – but when experiencing a dish like this it calls into question every other cut of meat I’ve said melted in my mouth. This beef was the very definition of tender. A bright pink on the inside, the marbled fat creating a very unctuous and luxurious feel to each bite. The snail is crisp and well seasoned, offering garlicky satisfaction that pairs well with the creamy sauce. I loved this dish so, so, so much. 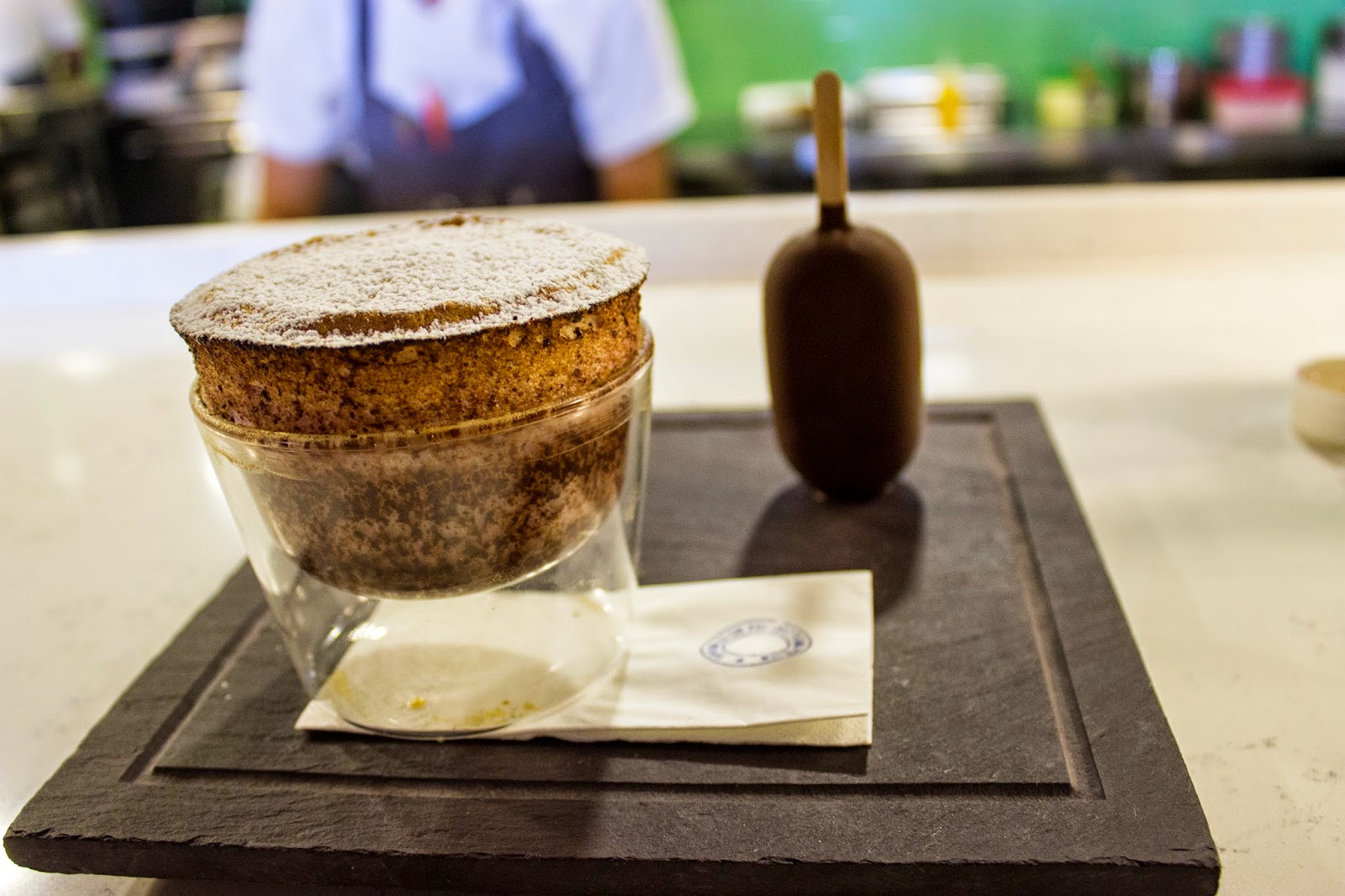 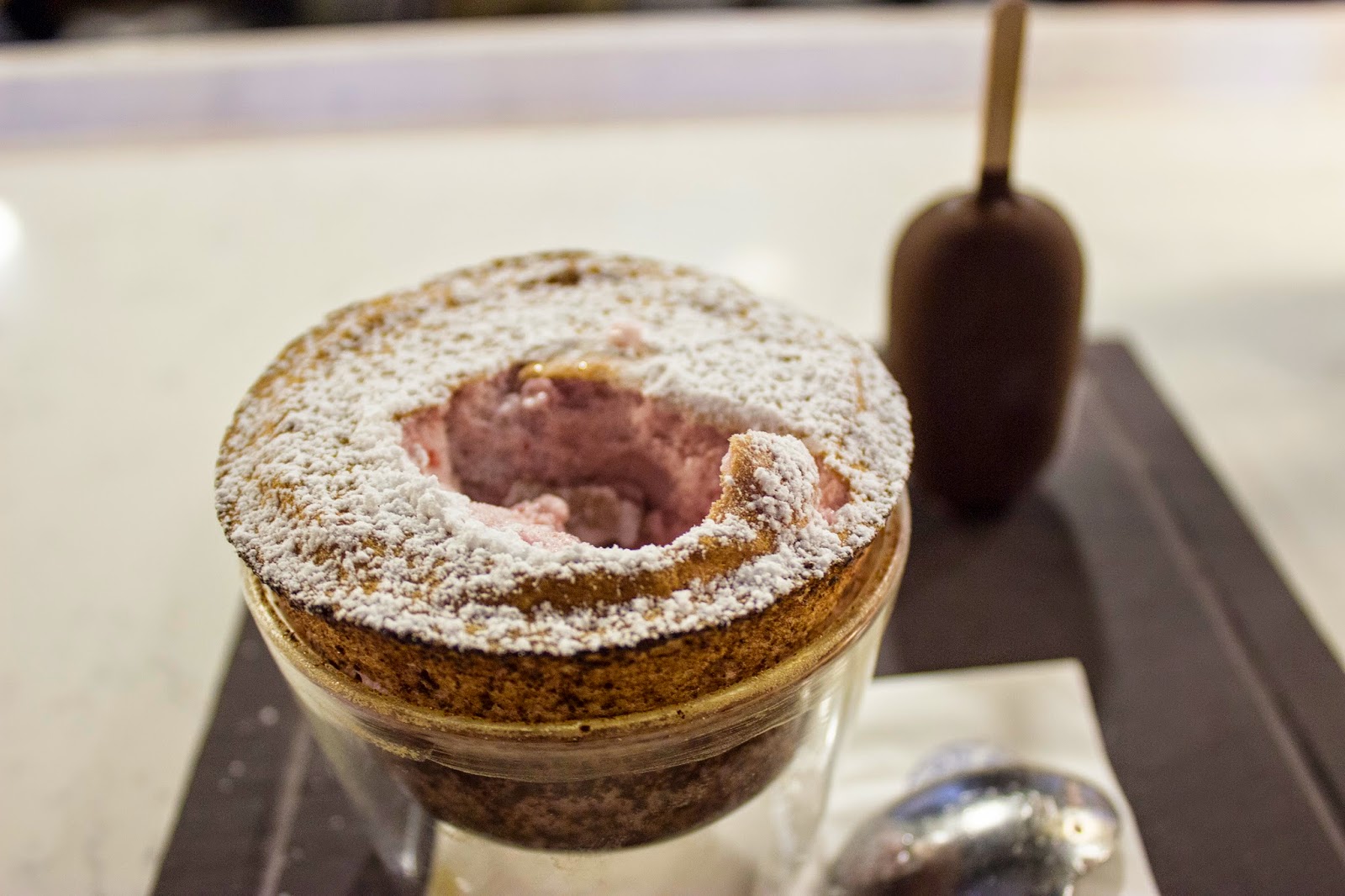 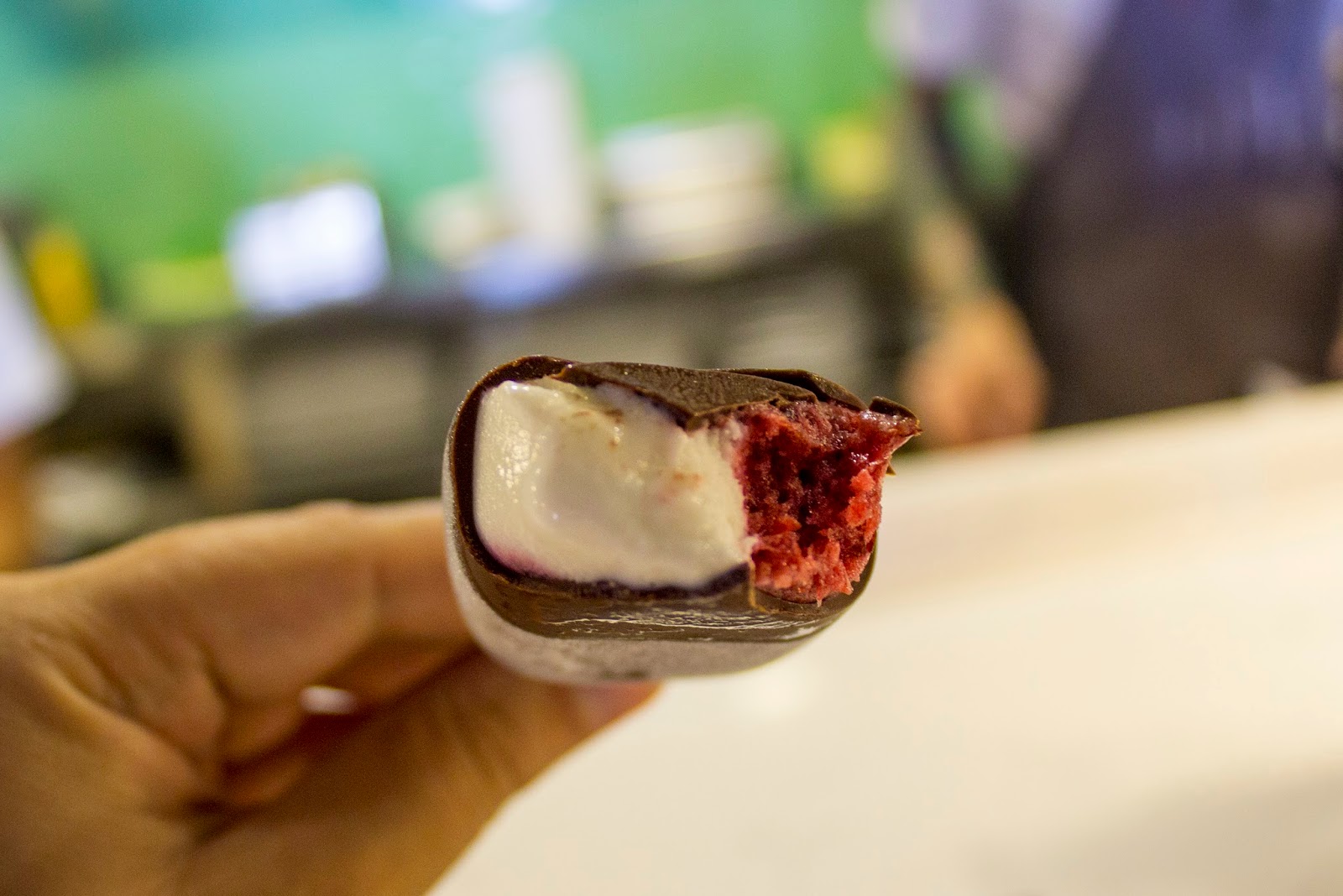 The final dish in my degustation lunch was the morrello cherry and chocolate souffle with a mini magnum on the side – two desserts in one! The souffle was ethereally light, living up to all expectations as I greedily dug my spoon through. There’s a layer of chocolate at the base, melted and gooey with molten delight. This alone would have left me feeling utterly sated but I still had my ice-cream to attend to as well.

The mini magnum is sweet and creamy, the chocolate on the outside dark and rich. It’s definitely the fanciest magnum I’ve ever had, and a great way to complete my meal. Not too sugary, but sweet enough to satisfy. 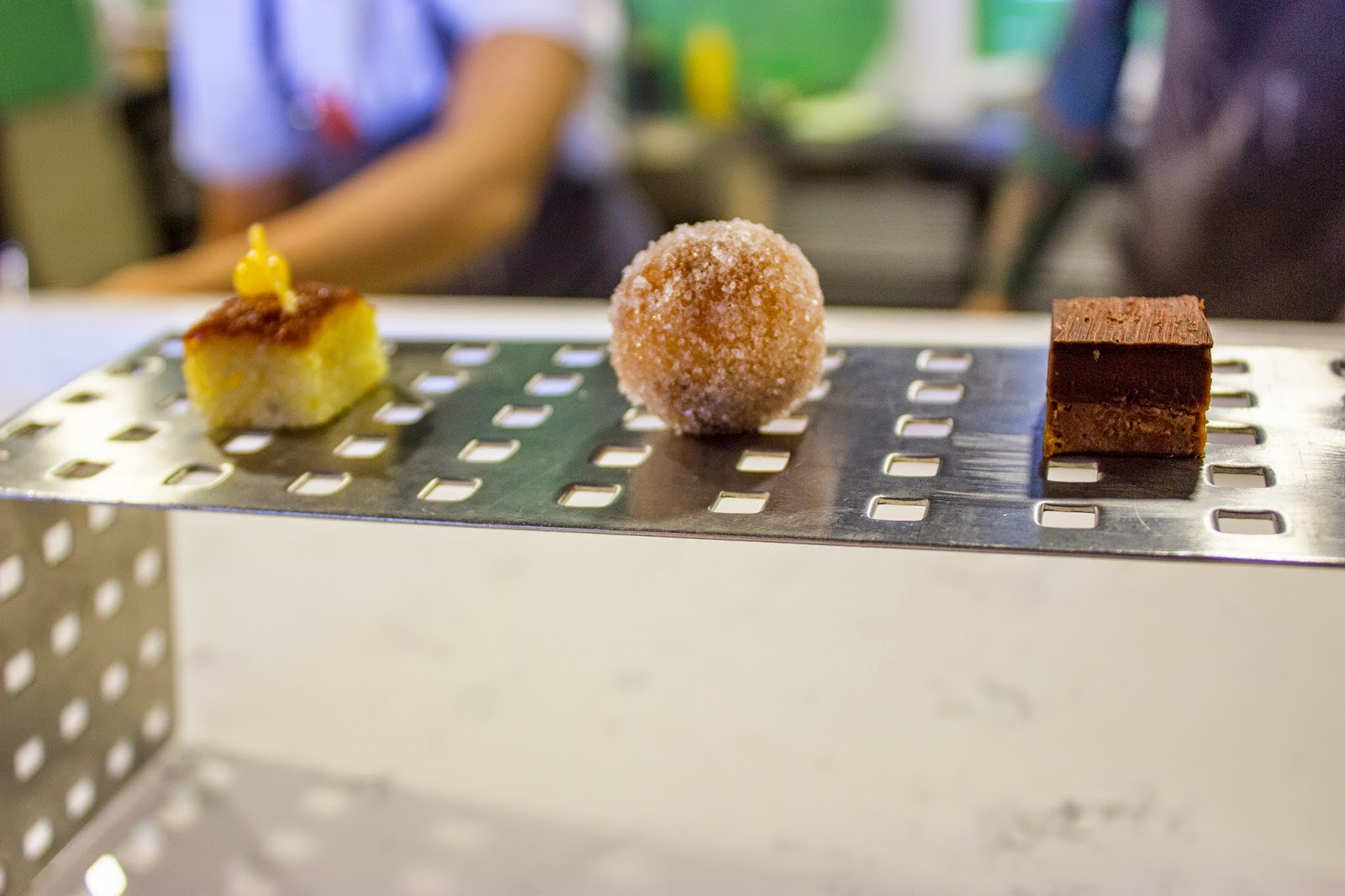 By that time I was feeling pretty ready to go find a little couch in my hotel and curl up for a nap! I was full and wowed and all round feeling like it had been a successful day indeed. But like all great epic meals, there were still some petit fours to devour.

A lemon fancier, jam donut and rum & chocolate tart sat on a simple metal grid. They looked unassuming but were sweet and fancy. I found the lemon fancier sour and lovely in flavour, however texturally it was a little drier than I expected. The chocolate petit four was rich and decadent, and the jam donut – well you can never go wrong with a jam donut as long as it’s heavy on the filling – which this one was!

While normally after eating so much I like to relax back and take a minute before moseying on home, but this time around I was about to burst so I quickly paid and made my way outside for some fresh air and a walk to digest. Whoops – I definitely let myself get way too full on this occasion!

But I have to say, even though it took me the rest of the day to start to feel normal again (I skipped dinner naturally), it was completely worth it. Tippling Club for me was an incredible experience, one that delighted and impressed me at every step of the meal. I highly recommend it to anyone visiting Singapore, and can happily say it was easily one of the best meals I’ve ever had. The perfect meal to finish my incredible Chowzter weekend (more on this to come in future posts soon).

Catching up over fritters at Gordon Street Garage

Beers in the garden at The Boulevard