A notoriously OG night at The Bao Bar 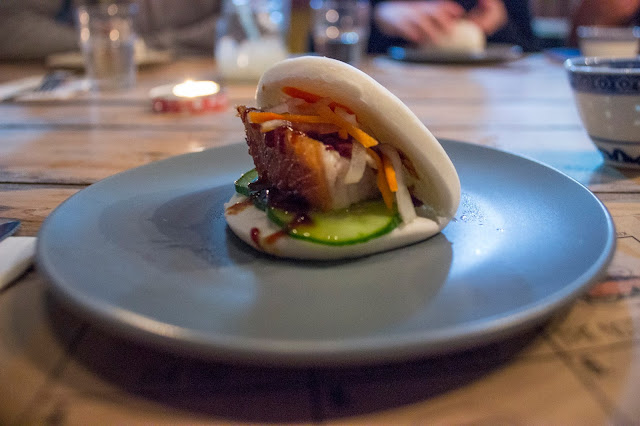 Bao bao bao baoooooo. I recently shared a post about ramen, burgers and most importantly bao at The DON pop-up in Victoria Park, and here is my part two – a bao degustation one week later at another little pop-up called The Bao Bar. 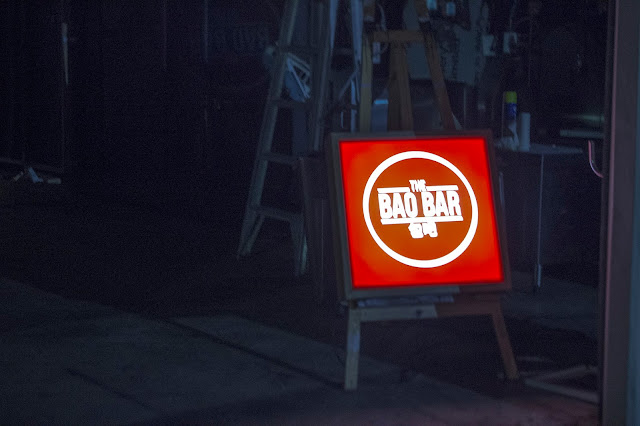 It took me a few weeks to get to this Friday night event but thankfully my food soul sister Bryony from Perth Eats was on the case and organised a catch up for a group of us foodies and some of our partners there. A nice excuse to hang out and eat fluffy bao filled with delicious ingredients. Like I mentioned in my post on The DON, I have big expectations for this food type.

We arrived at the O’Connor location at 7pm on the dot, entering the warehouse space quickly to escape the torrent of rain outside. It’s nice to see this kind of pop-up, which uses an industrial space in an inventive and engaging manner. From what I could tell, this place by day is the cooking space for a paella business and maybe Delish Ice too. 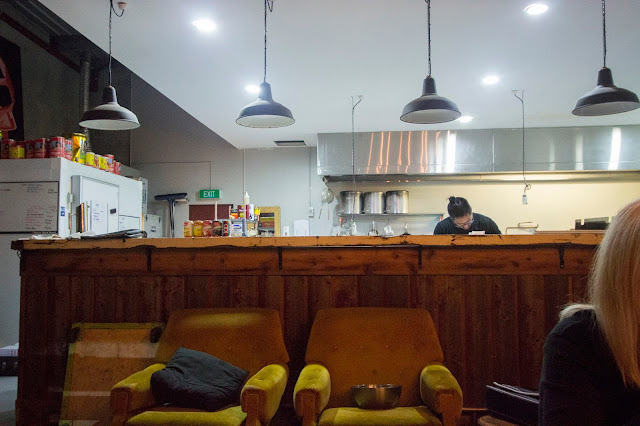 We take a seat at a long table, with dim warm lights and candles. The kitchen is right in front of where I sit, and there’s a lovely communal feel as we chatter away and munch on freshly cooked lotus root chips with five spice. I love crunchy lotus root, it’s so moorish and the perfect bar snack. And because we’re easily amused, we may have been overly excited (not just Jeremy and I but the whole group) that we found a batman lotus chip. 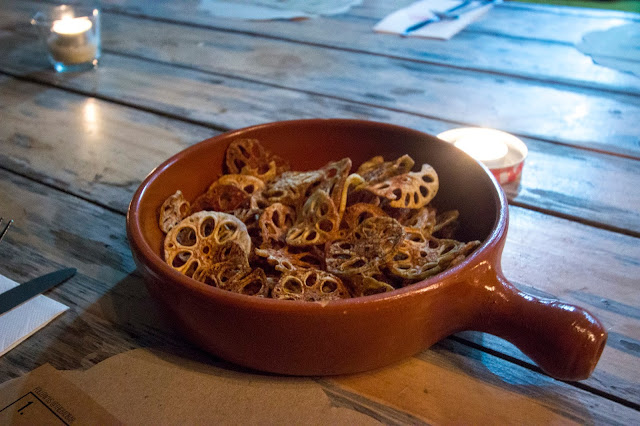 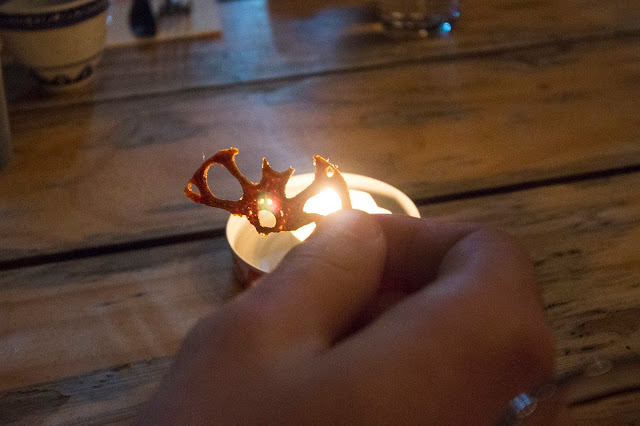 Before long we meet the team for the night headed up by Aaron. He’s friendly, warm and you can see that this is really his passion. I immediately am receptive because I just adore when someone loves what they do, it can really shine out in their actions. I did feel sorry for him on the night though – it was just him and two others working, with two people not making it to work.
I think they managed to still pull the dinner off, though I have to say that it was quite a long night. We didn’t actually eat our first bao until 8pm and finished up at midnight. I was pretty tired when it finished but I’m sure it’s not normally so lengthy when they have a full team – or at least I hope so! 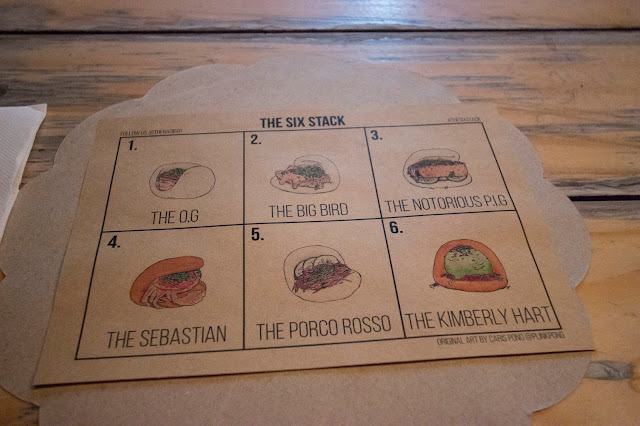 I love the little menu that sits at every table setting, outlining the series of bao that we’ll be enjoying for the night. With each course, Aaron also comes out to tell us his inspiration and the ingredients used. We kick things off with the O.G. aka the Original Gangster. A little nod to his love of hiphop music, plus paying homage to gua bao – the Taiwanese bao that is the original (and for myself, one that holds a big place in my heart) flavour.
Think unctuous braised pork, coriander and crushed peanuts sandwiched in fluffy white bao. I’m quite  partial to the more traditional version with pickled mustard greens, plus they usually mix in some sugar with the crushed peanuts which balances out the tart and salty elements. This version didn’t quite have those balanced components right, but it was still quite moorish and of course enjoyable too. 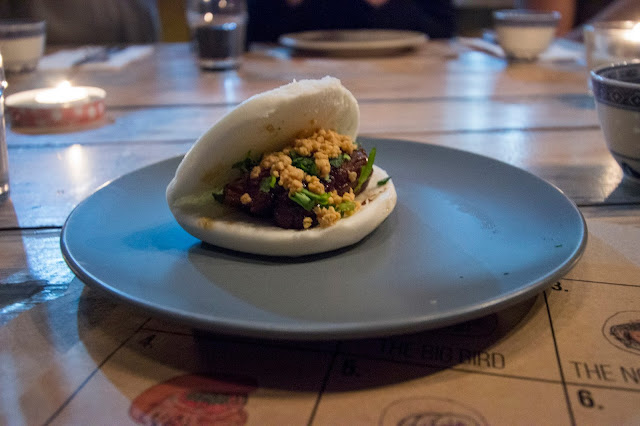 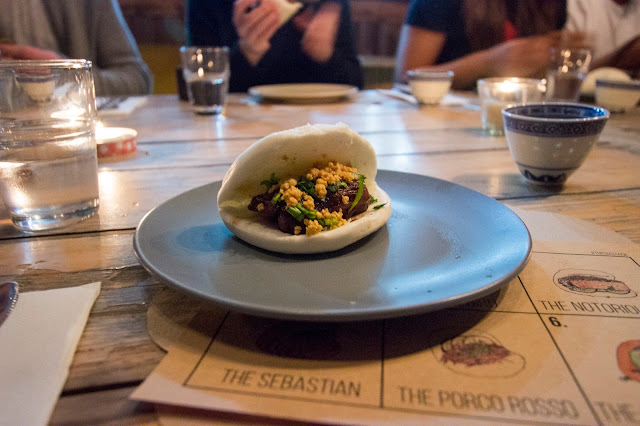 The second course for me was one of my favourites – the big bird. A playful tribute to a childhood favourite character on Sesame Street, this bao has crisp iceberg lettuce, juicy fried chicken and sriracha mayonnaise.
The chicken is tender and crisp, a lovely contrast to the softness of the bao. I thought the sauce was good, but I would have liked a bit more mayonnaise in the mix, and also a bit more sauce in general. But all up, a really great flavour combination. 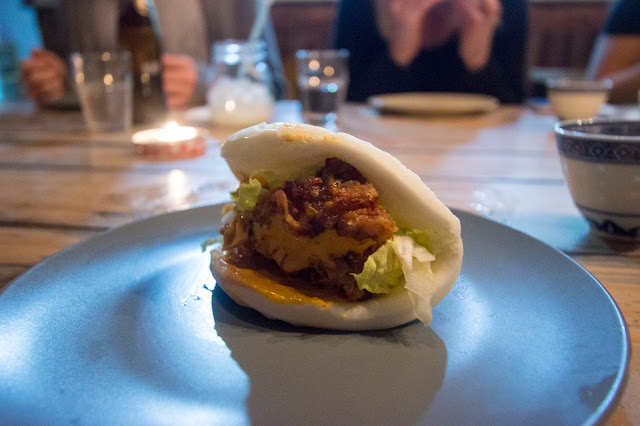 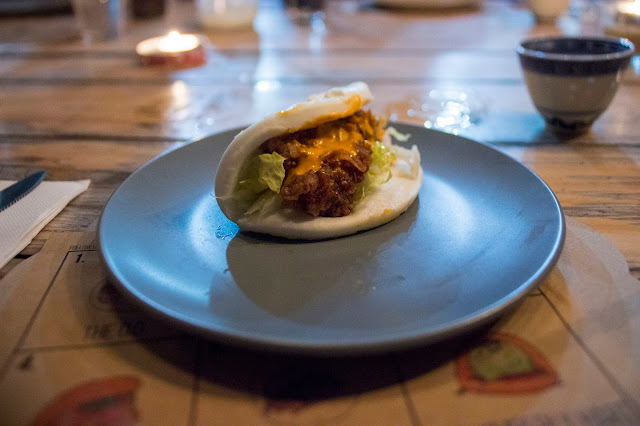 The third course was otherwise affectionately titled The Notorious P.I.G. – I was sold on the name alone – a cheeky pun complete with rap reference. I’m in! Makes me want to sing ‘piggy, piggy, piggy, can’t you see…’ (those who know will get me on that one).

A perfect rectangle of roast pork belly is accompanied by hoisin sauce, cucumber and pickled carrot (and daikon I think). Great vegetable choices in this and the pork was really promising – but the skin for me didn’t have that glass shattering impact like I’d hoped, instead was a little rubbery proving painful on my teeth. A good idea, but it just needs a little refinement to get to be truly memorable. 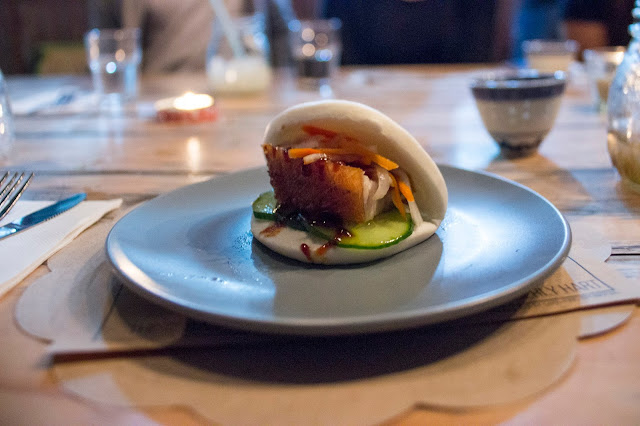 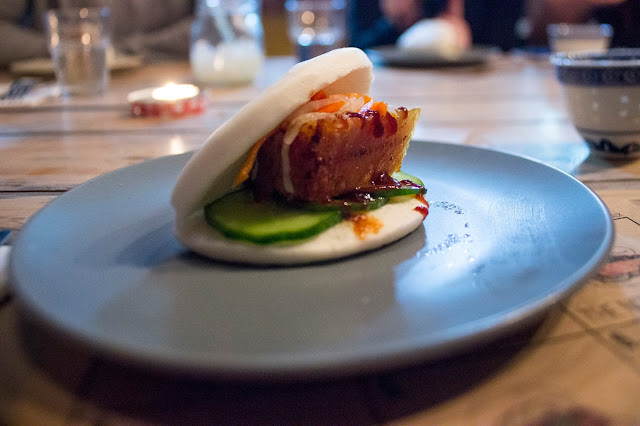 Passing the halfway mark and on to the fourth course, I was intrigued over it’s name – The Sebastien. Knowing my love for both The Little Mermaid and also soft shell crab, I was sure I would enjoy this greatly.
While the course is served in a deep fried bao, they did give us all the option to swap to steamed if we were feeling so inclined. I’d heard from others who’d been there to eat before that the fried bao were a little greasy but I was happy to risk it – and I’m happy I did because I think they must have taken this feedback on, it wasn’t too oily at all.
The soft shell crab is accompanied by fresh coriander and a tomato based sauce reminiscent of chilli crab. For me the sauce was a little too sweet (mind you I was in Singapore only a couple of months ago dining on chilli crab at the place that invented it), and the servings were a little inconsistent with Jeremy only getting a small leg of crab whereas I had a decent chunk. Nonetheless, I thought the thinking behind this was sound and it did pluck at some memory strings in my mind. And after all, food memories are the best. 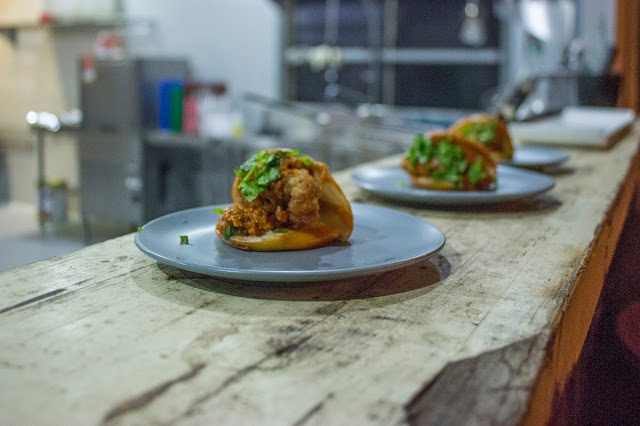 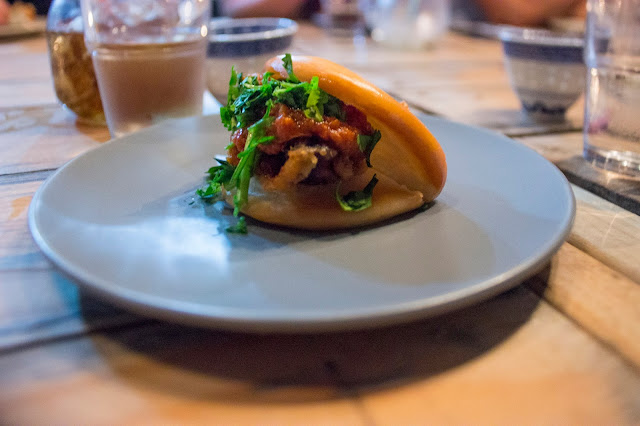 The fifth course, named The Porco Rosso after a Studio Ghibli movie had the table divided. For me, I liked the subtle flavour of char siu mixed into the pulled pork, and thought the use of fresh cucumber and pickled cabbage were a great match.

For Jeremy, he felt that having soft pork took away the pleasure you get when you eat char siu pork – particularly those wonderful little crunchy charred pieces which get all caramelised and delicious. 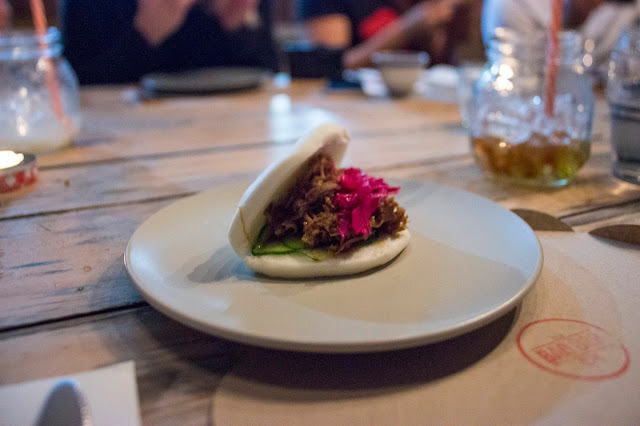 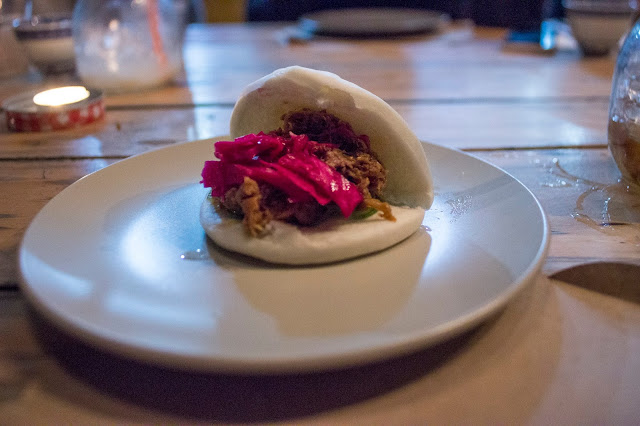 Like all good degustations, our final course was a sweet ending to the night. Named Kimberley Hart after the pink power ranger (hello childhood, I hear you calling) this dish was another deep fried bao, this time encasing green tea ice-cream and red beans with crushed pink pocky sprinkled over the top.

I found this dish quite playful and inventive – especially because while Asian desserts are starting to become more popular, not as many touch on using red beans. They do a good job balancing out the ingredients with creaminess and crunch. I would have liked an acidic ingredient to cut through the richness of the matcha, but all up I thought it was a decent offering to end our night. And using the pink pocky was very playful! Reminds me of my childhood. 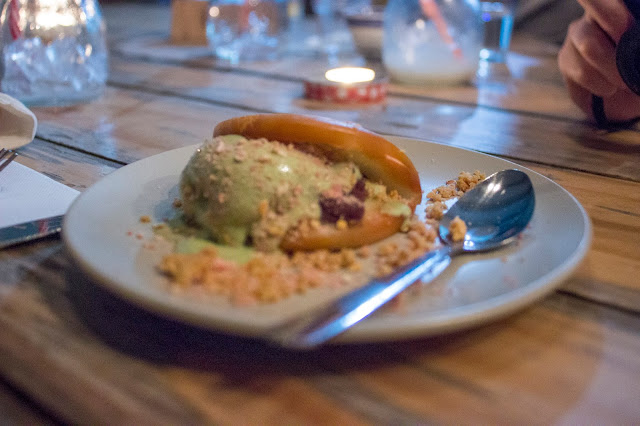 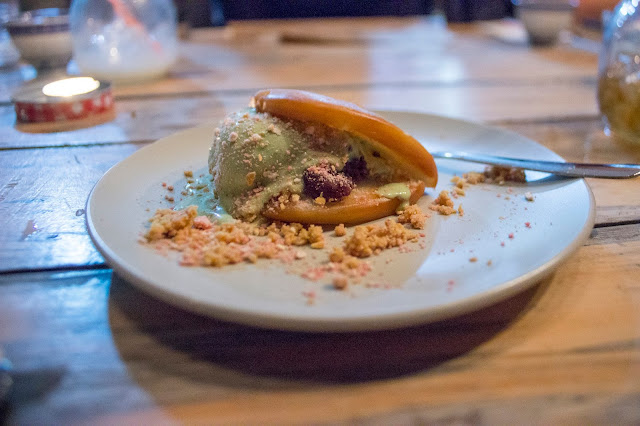 After our final bao is finished it’s just hitting midnight so we all call it a night soon after. Normally consuming six bao in one sitting would leave me feeling really full but because the evening was so drawn out I was actually not completely sated! Strange I know – but Jeremy confirmed he felt the same on the drive home.
I think the Bao Bar has some great potential and is good value for money. It’s creative and fun, and with just a few tweaks and a bit of a speedier event it would be well worth checking out. I’m looking forward to seeing what they do next.