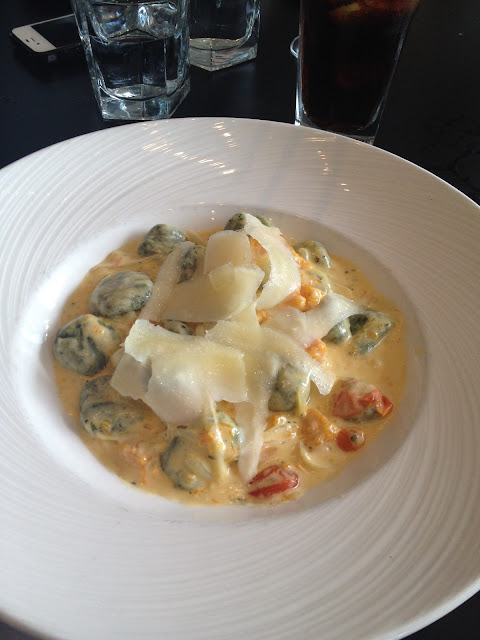 The Royal in East Perth is a place that nearly everyone I know has been to at one point or another. It’s a great view with a decent wine list and a menu that is made up of enough dishes to suit all sorts of cravings. It’s a restaurant that I tend to refer to as old faithful – a place where I’ve never walked away disappointed. But I’ve also never been wowed to the point of raving on and on. The dishes aren’t particularly inspiring, but they do the job and they do it good enough.

Today was no different. I went with my work colleagues for a long lunch; soaking up the bit of sun that we managed to get on this last day of autumn.
The dishes ordered around the table were of varying kinds. Slow roasted goat risotto with char-grilled corn, feta and peppers (apparently incredible), a carefully constructed beef burger, Tuscan vegetable penne and five spiced calamari on a bed of greens. Not to mention the good old steak sandwich.
I opted for the spinach gnocchi which was an impressive mottled green that popped in the rich creamy sauce along side bright orange sweet potato cubes, soft cherry tomatoes, shaved parmesan and sage that had great flavour ‘pop’.
It was a great dish. Rich and perfect for the rainy weather which soon came as my main arrived. It was a generous serving, and the gnocchi was cooked on the money al dente. It had a bite to it and didn’t fall apart in my mouth like some over-cooked ones can.
The sweet potato was slightly mashy, but still added depth to the dish, as did the softened tomato. The shaved parmesan was a little thicker than I usually like, but it was still enjoyable to eat.
I couldn’t finish my serving, which is a testament to the restaurant. They charge reasonable prices and offer great amounts of food to consume even though they’re located in a relatively ‘fancy’ place in Perth. That’s definitely a selling point to me! And with my glass of Cape Mentelle SSB I felt comfortable taking my time, slowly making my way through a sizable dent of the dish.
When it came time to order dessert I opted for the choc-berry and hazelnut meringue stacks which to me suggested a nice combination of fruit and cocoa that wouldn’t be too heavy. I was a little excited to have it delivered.

Unfortunately it seemed the kitchen had sold out of these (insert incredibly sad face) so in keeping with the egg white inflated dessert I opted for the lemon meringue pie. It. Was. HUGE.
Way too big for one person to be expected to eat (which normally I wouldn’t complain about but it was slightly excessive). But the flavours were there. The lemon extremely tart and the meringue soft and fluffy. The pastry for the pie was delicate and crisp, baked just right.
All in all it was an enjoyable lunch from a place that I always can expect such a thing. No wow factor, but good honest food that has me coming back a few times each year.

Beers in the garden at The Boulevard

Prawn roll freshly made on order and some of Perth

Here’s to the summer babies, the ones who love t

It might not look particularly pretty, but this is

Throwing back to a damn good wedge that I’m stil

🦀 seeing 2021 out with crab cakes, sunshine and

Kimchi cream cheese udon aka the guilty treat I ne

Honestly @mummucc you truly blow me away with stel