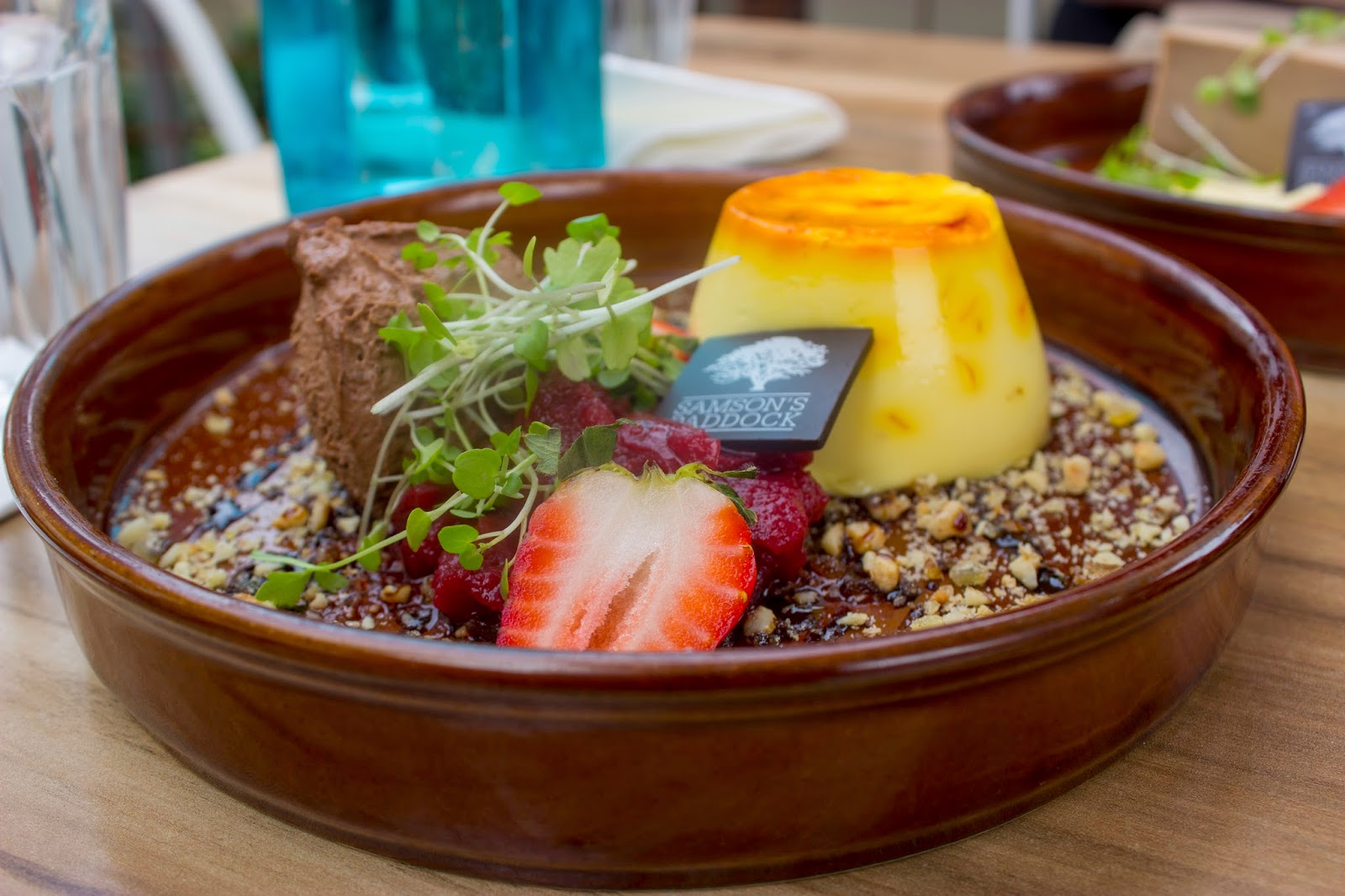 One of the best things about long weekends is the opportunity to arrange catch ups with friends as well as finding time to relax and not feel guilty that you’ve lazed the weekend away. I love finding times to spend with my girls, and because we’re food fiends, said meetings definitely need to involve a tasty treat or two.

On the Easter weekend I’d arranged for lunch with my friends Carlie and Sherilyn – the latter who suggested we try Samson’s Paddock in Mosman Park. I had been lusting over their breakfast menu but i was confident lunch would present some delicious dishes too (plus you can have dessert and not be judged… unlike my cakescapades at brekky).

We arrived on the Saturday and to our surprise we were the only diners in there to start off with – though it did fill up during our meal. Since the sun was out we made our way to the backyard area which had some nice tables and lounge areas to choose from.
Initially when we all sat down none of us actually felt that hungry so we decided to go light on and just order a few small shares to start off with. Because of this, and the fact that we were busy chatting (read: talking at each other excitedly) I may have forgotten to take some photos! Thank you trusty iPhone for capturing some of the savoury dishes.
After a little deliberation, we each pick a dish… though it’s not until they all come out that we laugh and realise we’ve all chosen something fried. At least it was Easter and you can almost excuse that behaviour – right? 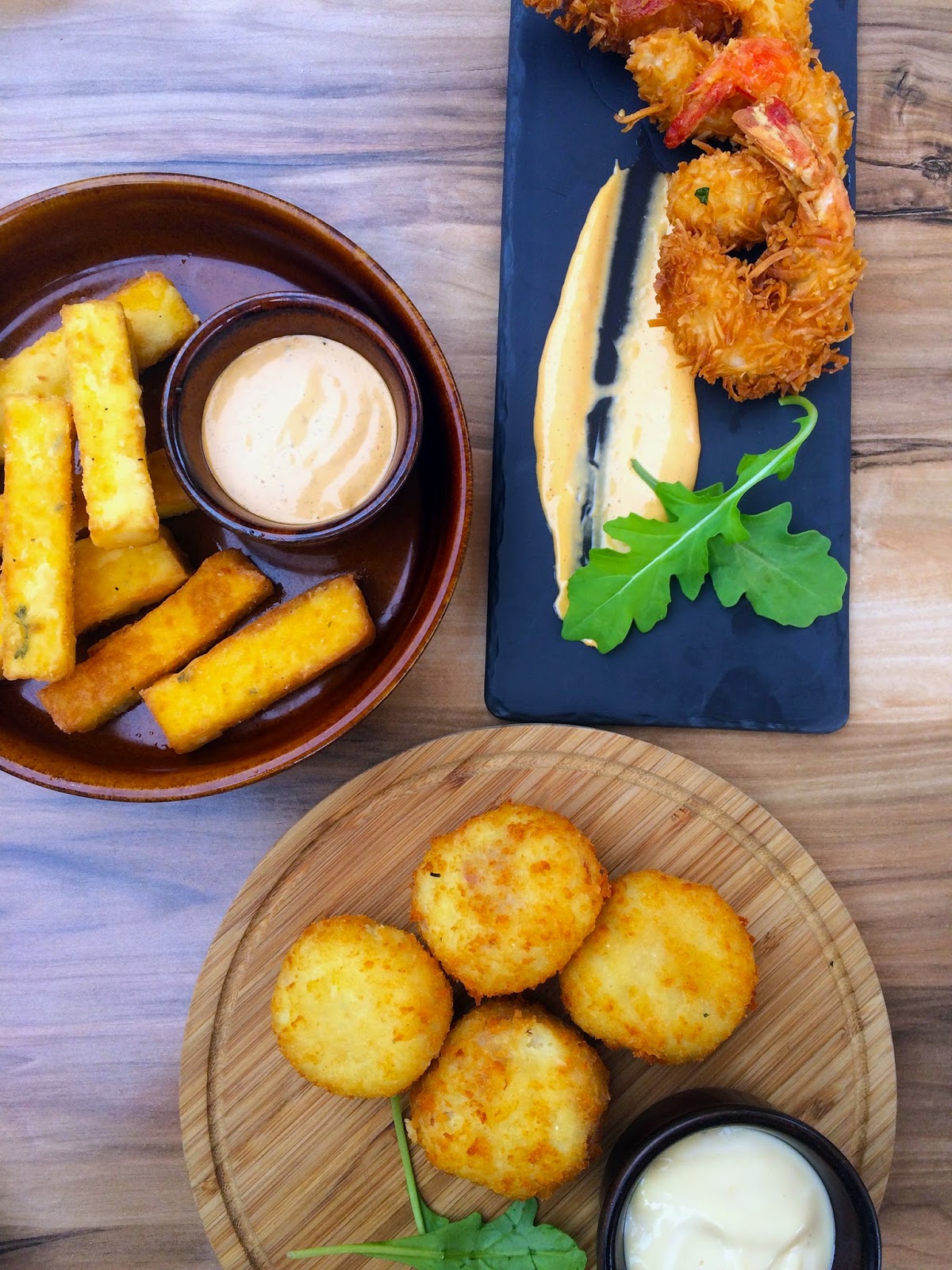 Sherilyn’s choice of the polenta chips with smoked paprika remoulade ($13.00) is a nice and simple dish. I question the associated price tag considering I know that polenta chips are a very cheap thing to make, but the flavours in the dish are tasty enough to enjoy despite the cost. I would have liked to see a few more on the plate and for the remoulade to have been a bit more balanced as I found the smoked paprika quite dominating.
Carlie’s pick of coconut crusted tiger prawns with lime and chilli aioli ($17.00) was my favourite of the savoury dishes ordered, though once again I couldn’t help but question the cost. At over $4.00 per prawn they needed to impress which I’ll admit they were tasty, but still didn’t quite hit the mark fully for me. Great potential with the use of the coconut, but they needed seasoning and more spark to the dipping sauce.
I found choosing a dish as difficult as ever with my eyes flitting over the menu in greed. Finally I made my decision of the ham and cheese croquettes (I think these were around $14.00). They came out looking almost like little mini arancini! Golden and crunchy on the outside, they had a combination of potato, ham and cheese inside to create an enjoyable bite. Nothing groundbreaking, but it ticked the boxes.
When we’d finished those bites we actually realised we could stomach a little more so we added on an order of the Copacabana quesadilla – a dish filled with chilli con carne, gouda, mushroom and topped with guacamole and sour cream ($21.00). It was a relatively thin quesadilla but had some nice flavour to it. Not wanting to nitpick I would have preferred the onions inside to be less chunky but the use of gouda was a nice flavour elevation. Again a satisfying enough dish but going along that common theme I found myself once again questioning the price. 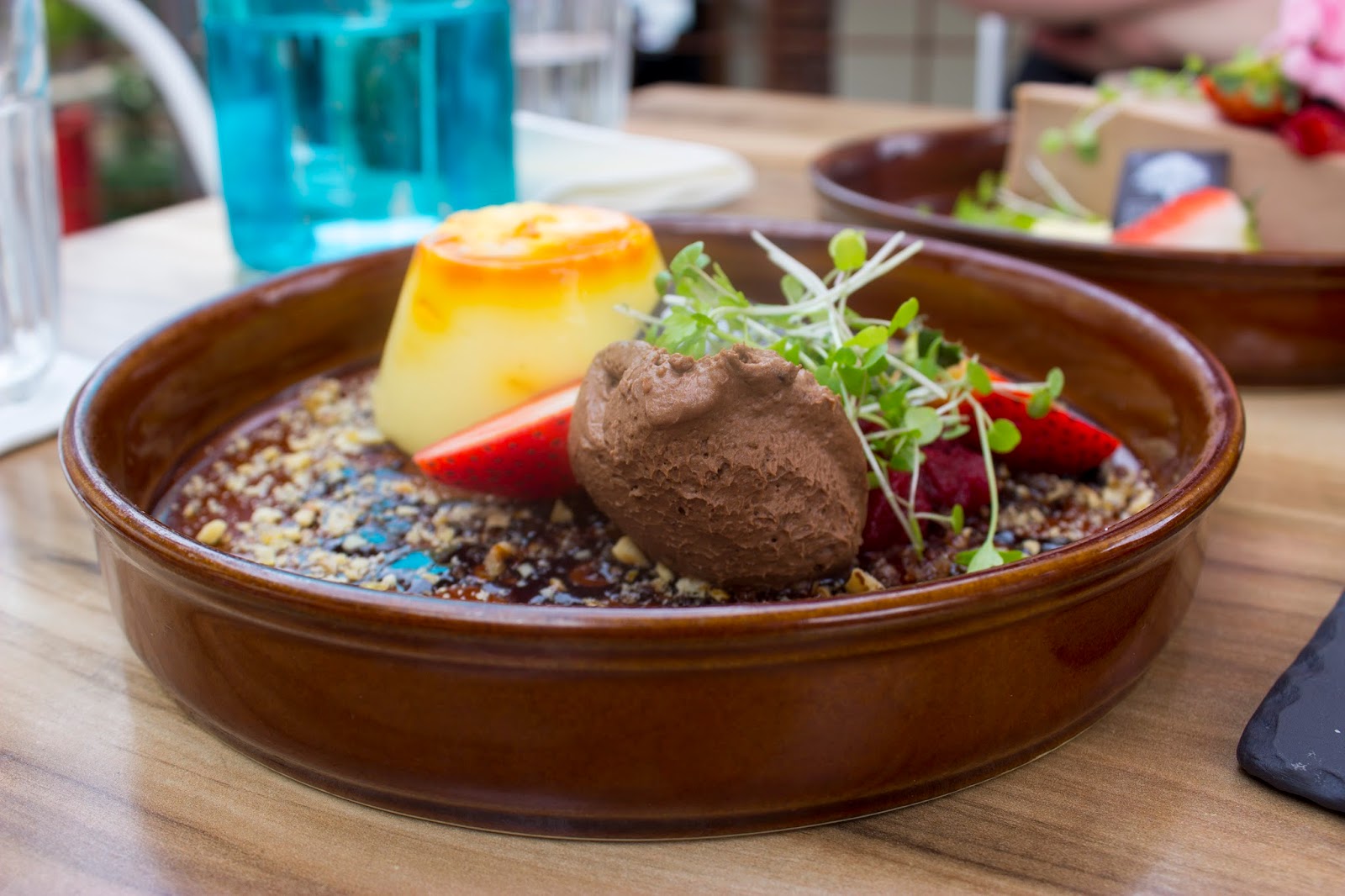 Since we were all eager to continue hanging out together I made the suggestion of dessert, which the girls happily agreed to. Ahhh I love that my friends love food as much as I do. We all pick our own desserts, and then the girls promptly remind me to drag my camera out to capture some snaps.
At this point I may have gotten a little distracted by the wobbliness of my saffron pannacotta with hazelnut ganache, praline and raspberry jelly ($15.00). But can you blame it? It definitely had an alluringly satisfying jiggle to it! 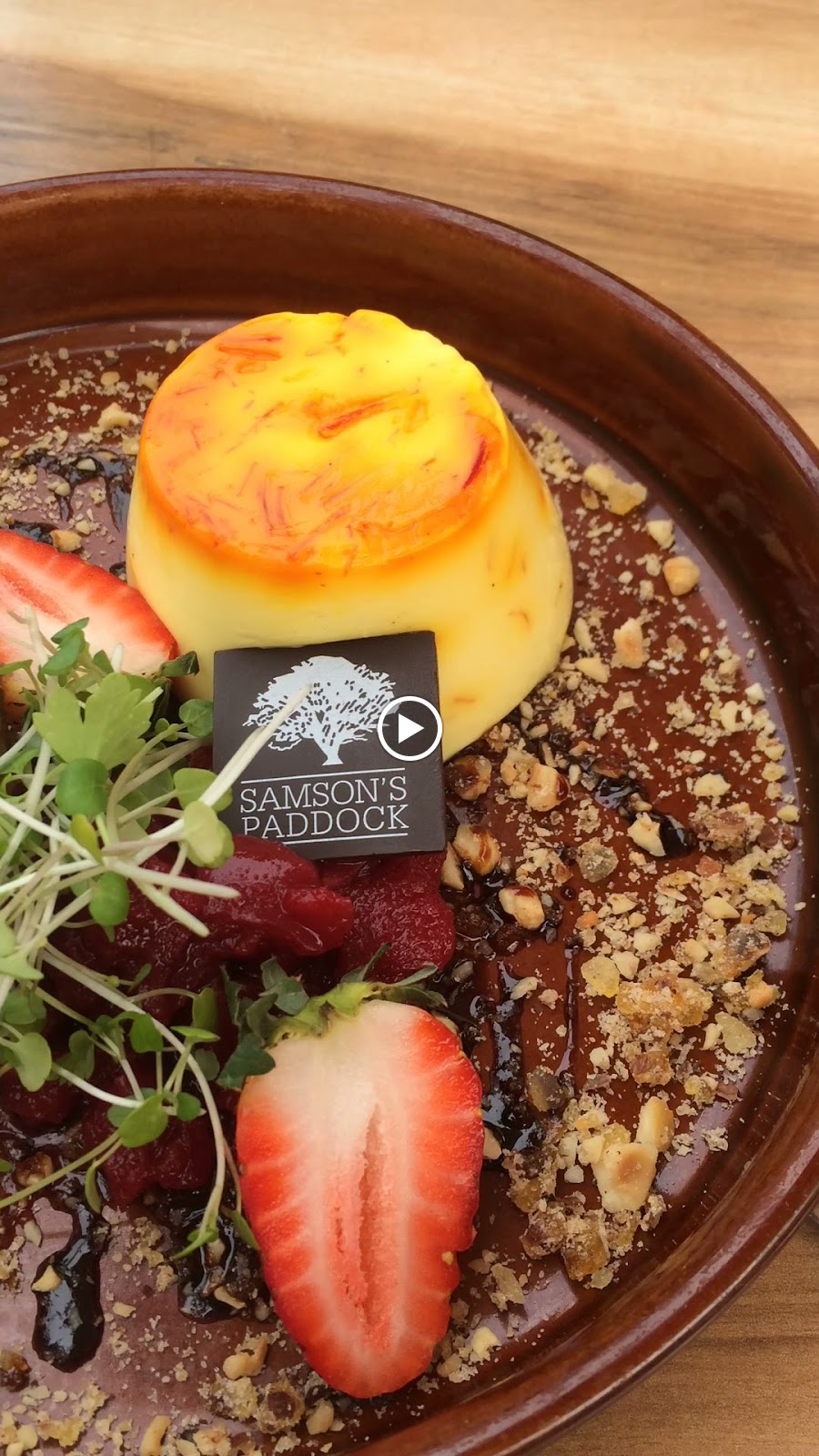 My dessert was spot on in terms of flavour and presentation. I love the use of saffron threads in the dessert as it brought colour and spice, but balanced well with the other ingredients. The hazelnut ganache in particular was a beautiful and well thought out addition that complimented the pannacotta really well.

Some people might have baulked at the use of sprouts on the dish, but I’m of the camp that actually enjoys some fresh edible garnishes on my desserts – I think it helps cut through any sweetness. 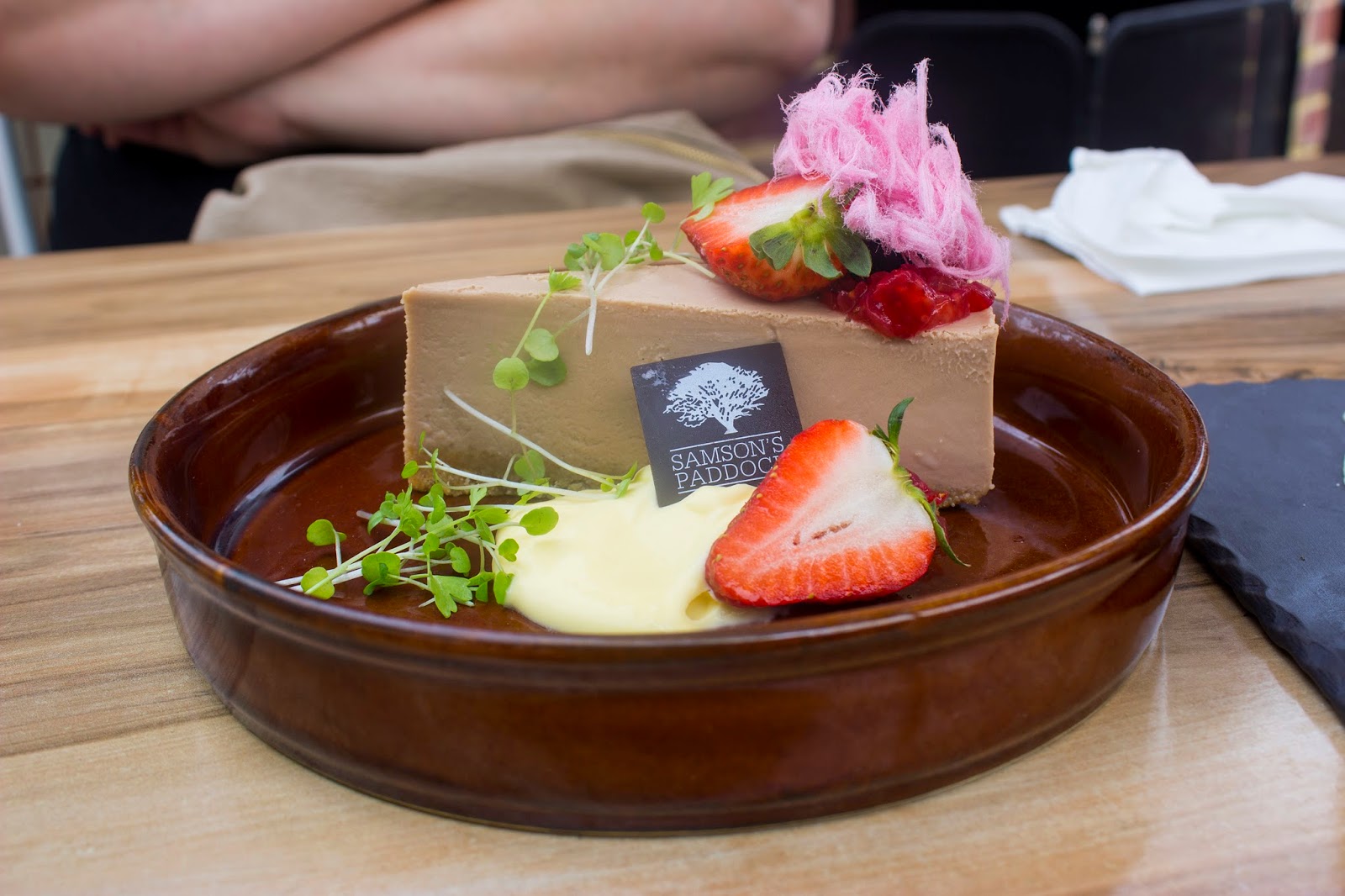 Carlie’s milk chocolate cheesecake with guazzeto of strawberry and passionfruit cream ($15.00) looked really simple but I thought it was quite pretty too with it’s little flaming cloud of pashmak and a scattering of sprouts.

The milk chocolate flavour is spot on, lending itself well to the smooth but rich cheesecake mixture. The base is crumbly and buttery; the passionfruit cream a nice juxtaposition in flavour. I love the use of those little Samson’s Paddock chocolate squares they add to all their desserts, it’s a nice little touch and the fact that it’s edible makes it worthwhile having on the plate. 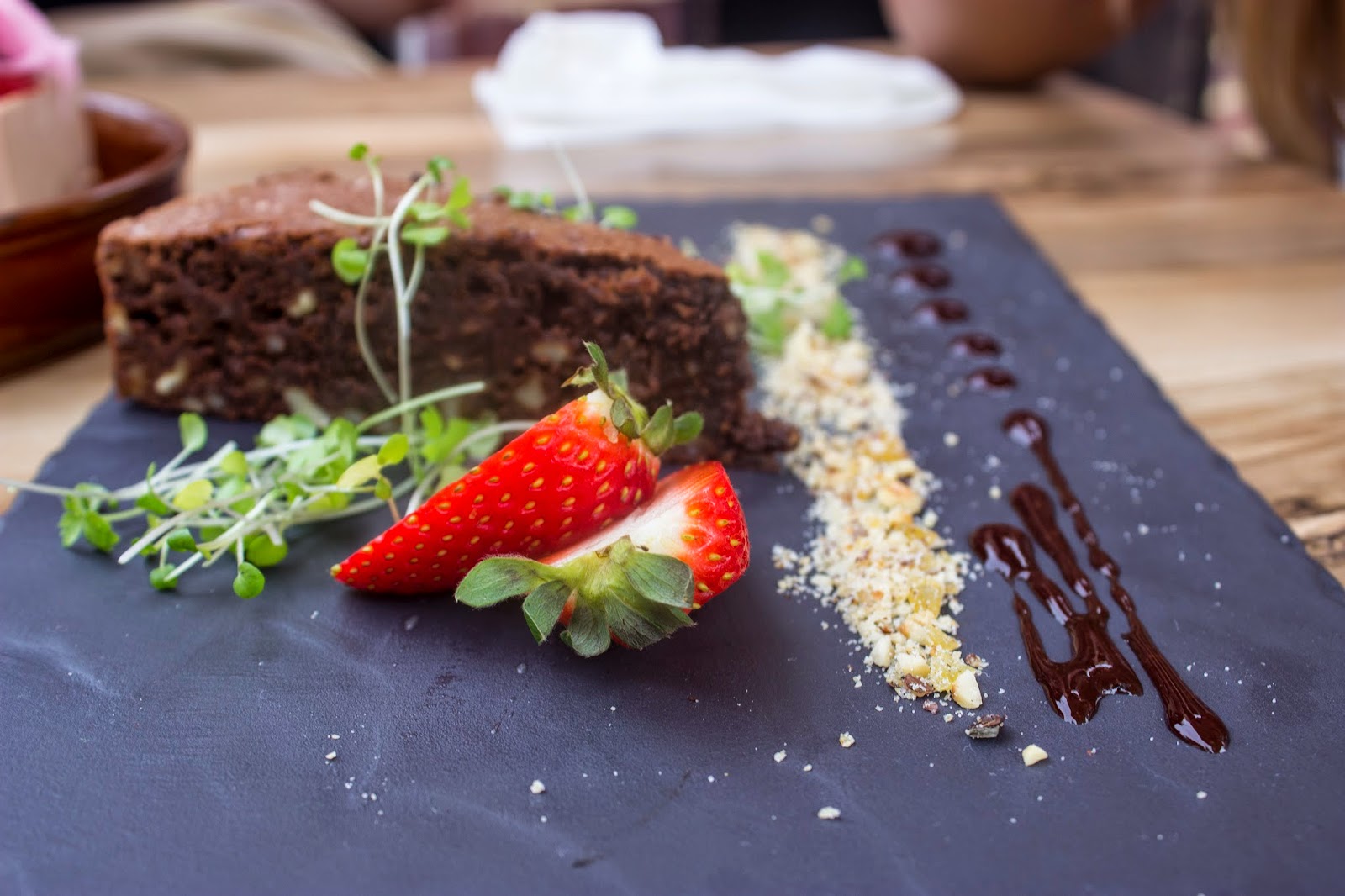 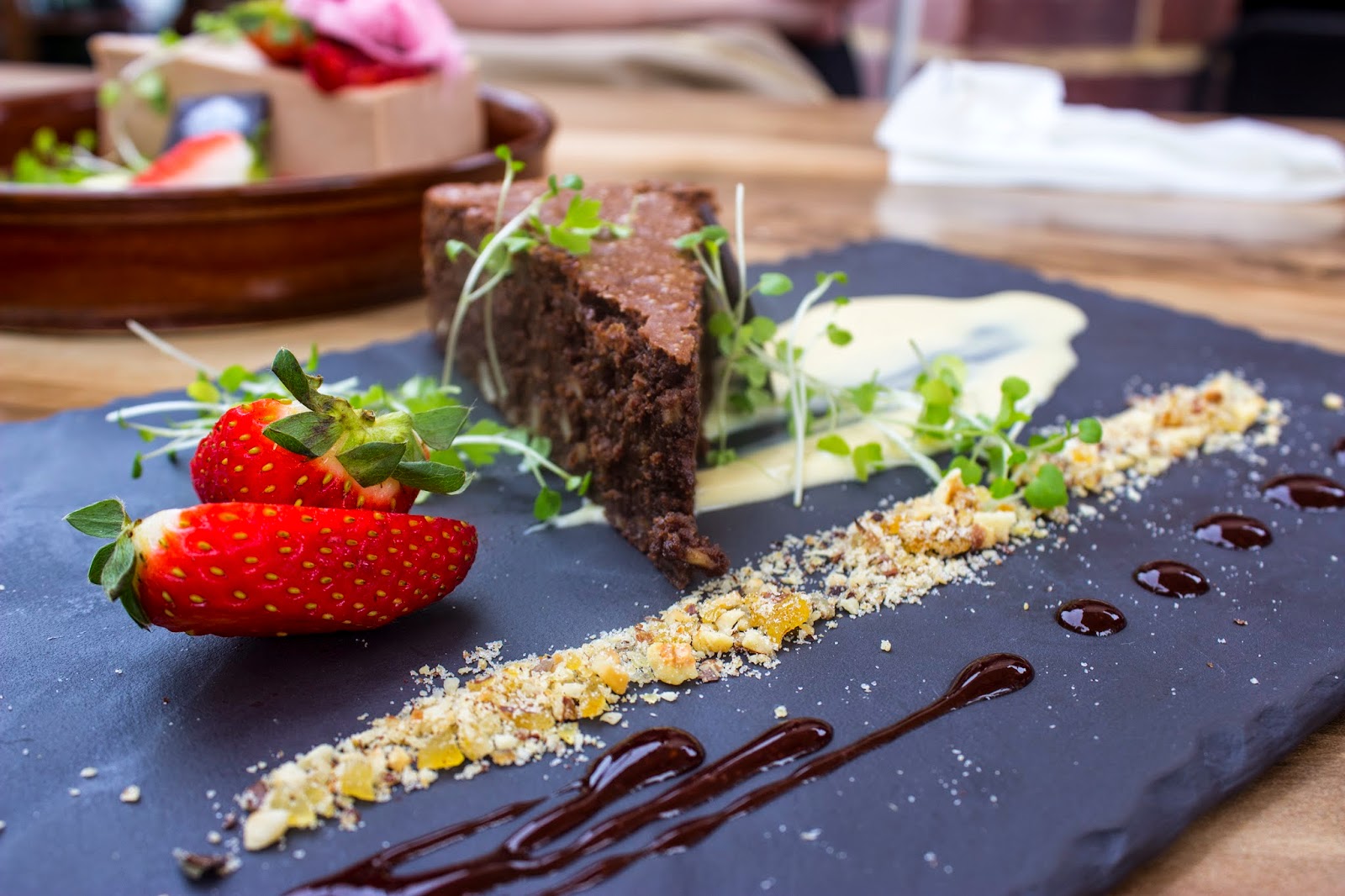 Though my eye immediately went to the pannacotta because I’m such a fiend for it, I have to admit I had a small pang of jealousy when Sherilyn’s flourless chocolate cake with praline crumb and anglaise ($15.00) came out to the table.
There’s something so satisfying about a lovely dense chocolate cake, with those rich flavours and almost chewy texture. We make something similar at home and it’s always a big hit – perfect to warm up and have with a scoop of ice-cream. Again we saw a repeat of a strawberry and sprouts on the plate which seems to be their formula for desserts. 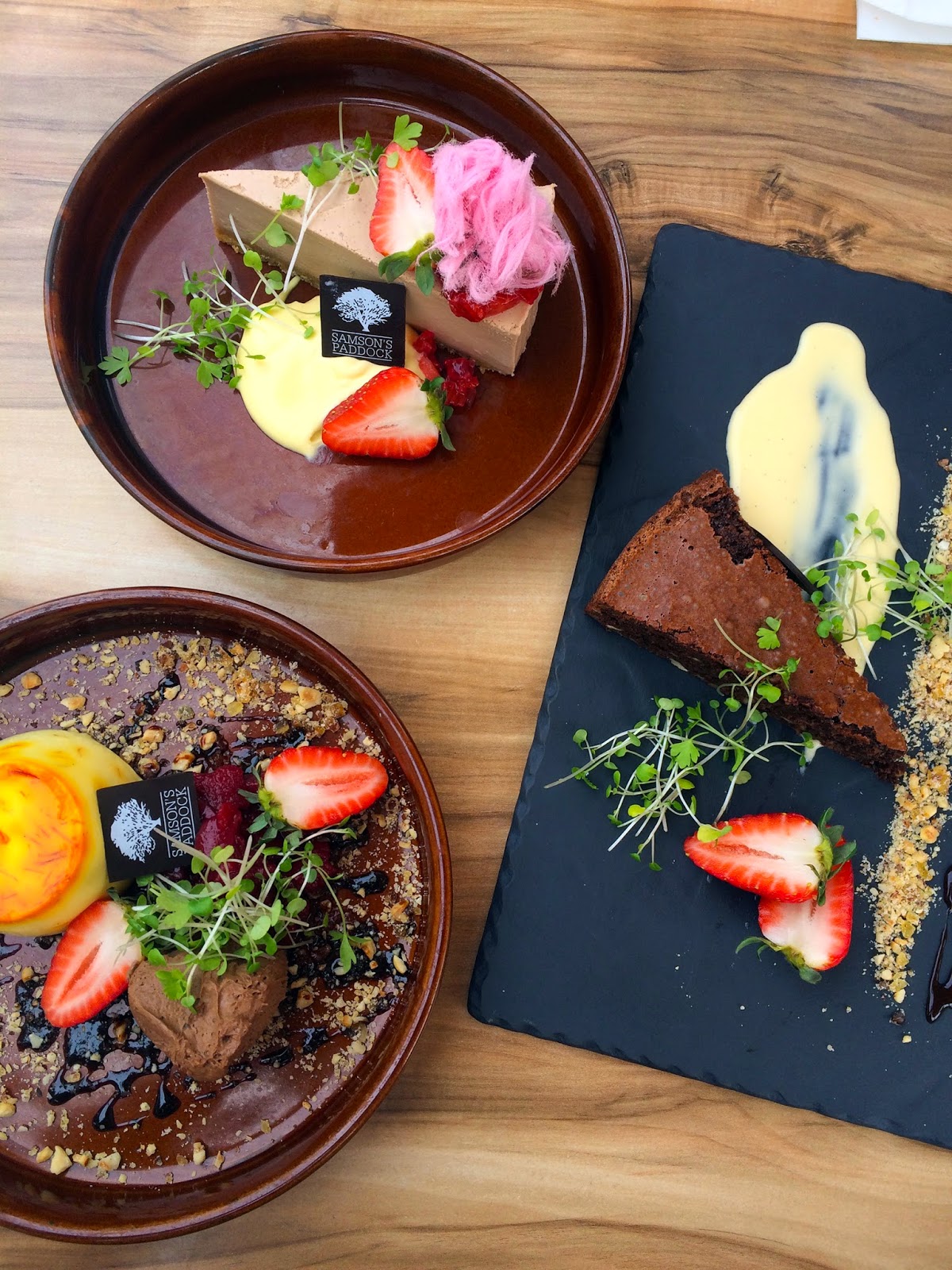 And with the last scrape of food all licked up and plates cleared, we took the opportunity to relax in the lovely sun and keep chatting. Samson’s Paddock has that kind of vibe where you don’t feel rushed and it’s a great setting to spend time with friends.

I did enjoy our catch up and the food, though for me their strength was in the desserts rather than the savoury dishes. I would like to come back and try breakfast or their bigger plates for more of a taste of their full experience and to see the value for money in those styles of dishes. So next time I head down to Mosman Park I’ll have them in mind. All up though, a cute little suburban spot that was good to relax with my girls in.