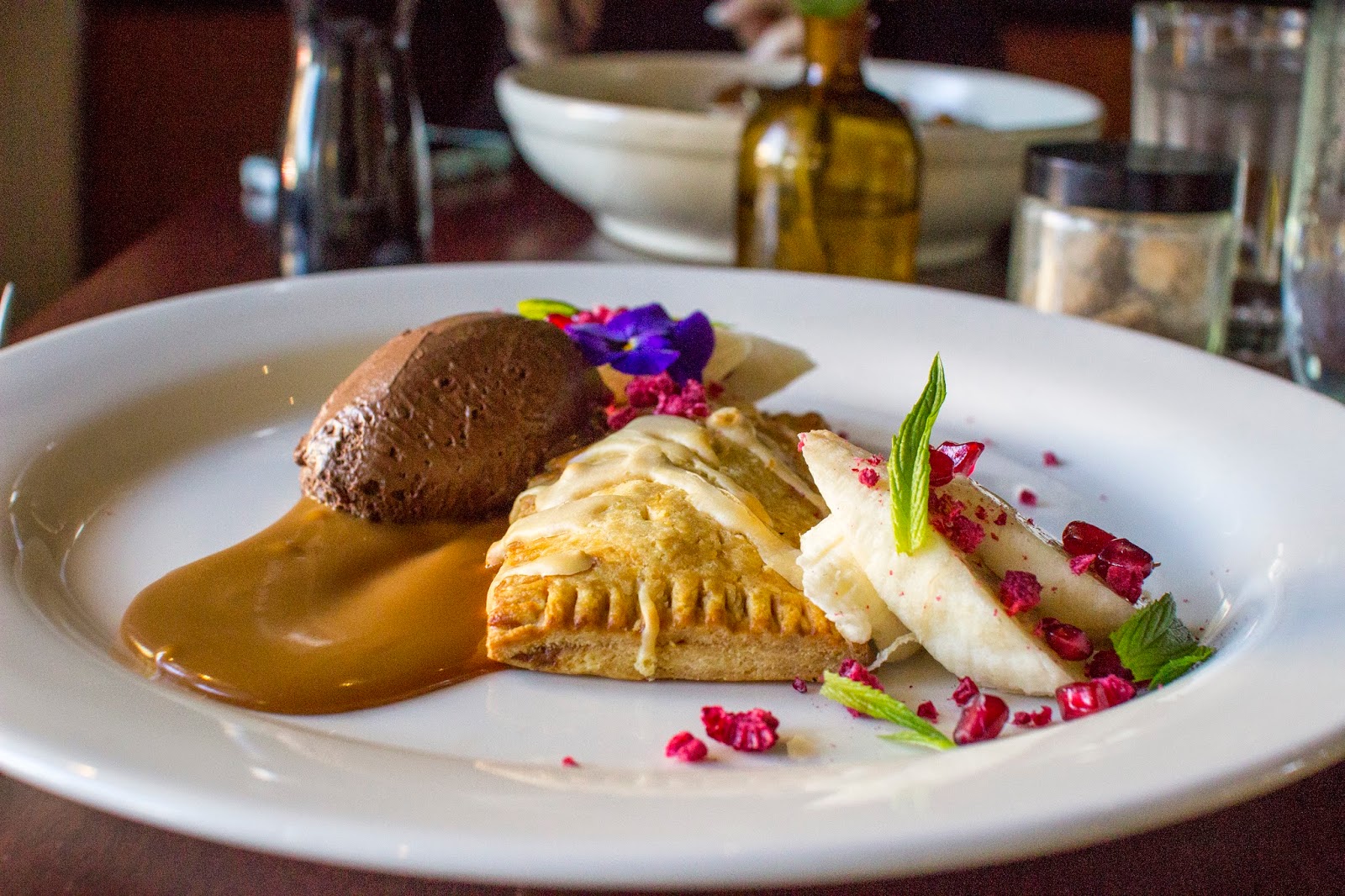 I am a firm believer in second chances in both life and in food. Sometimes this policy can burn you – after all, there is that ‘fool me once…’ saying for a reason. But sometimes (and it’s wonderful when this happens), you can be left pleasantly surprised – even impressed. This was the recent case for me with two different visits to North Perth newcomer, The Old Laundry.
In March I caught up with a few friends at the restaurant including Bryony (who’s social alias is Perth Eats on Instagram and Bryony Eats on her blog) for breakfast one morning. We’d all heard good things, seen some tantalising pics and were looking forward to something to kickstart our day in the right way. 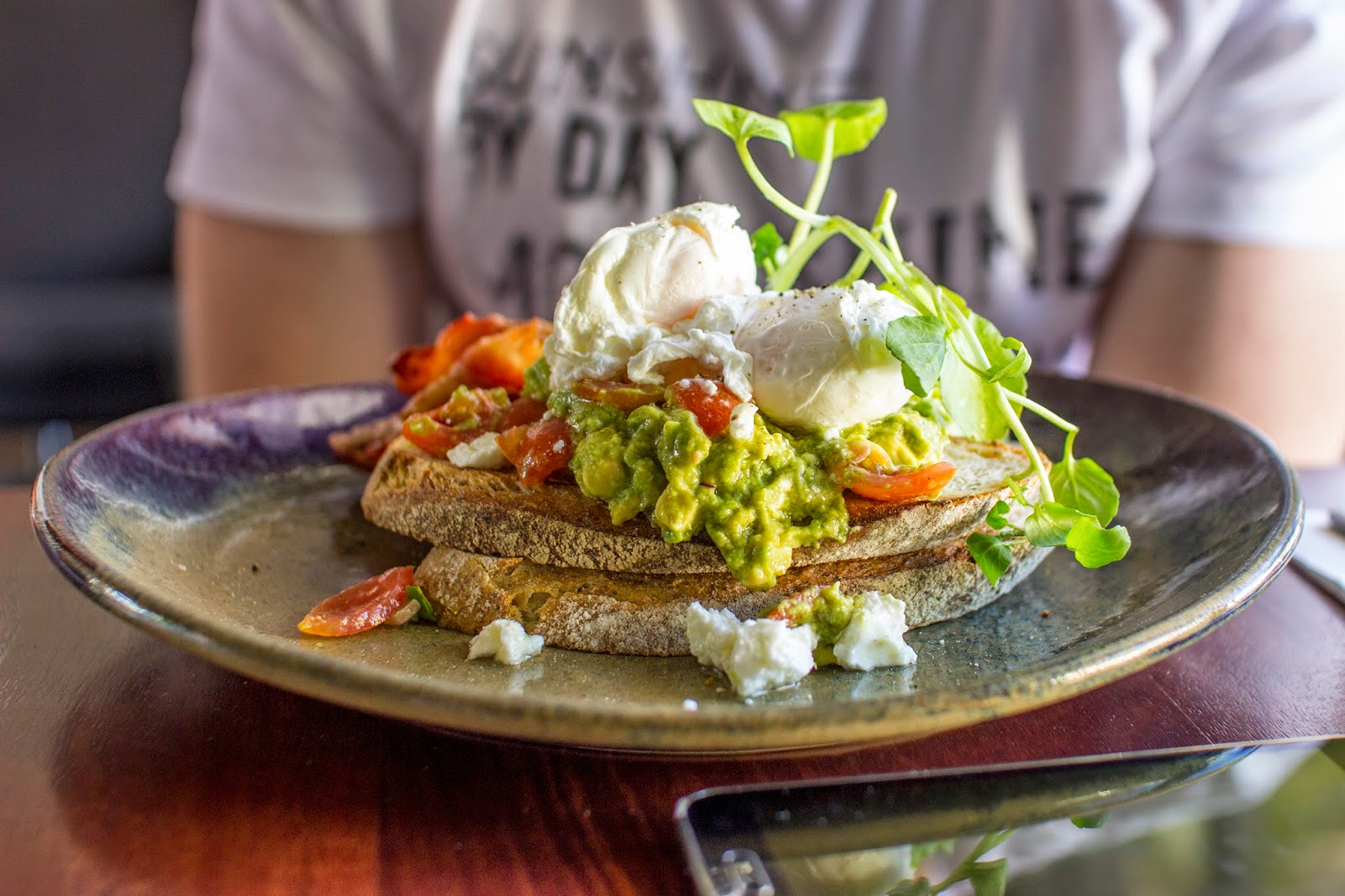 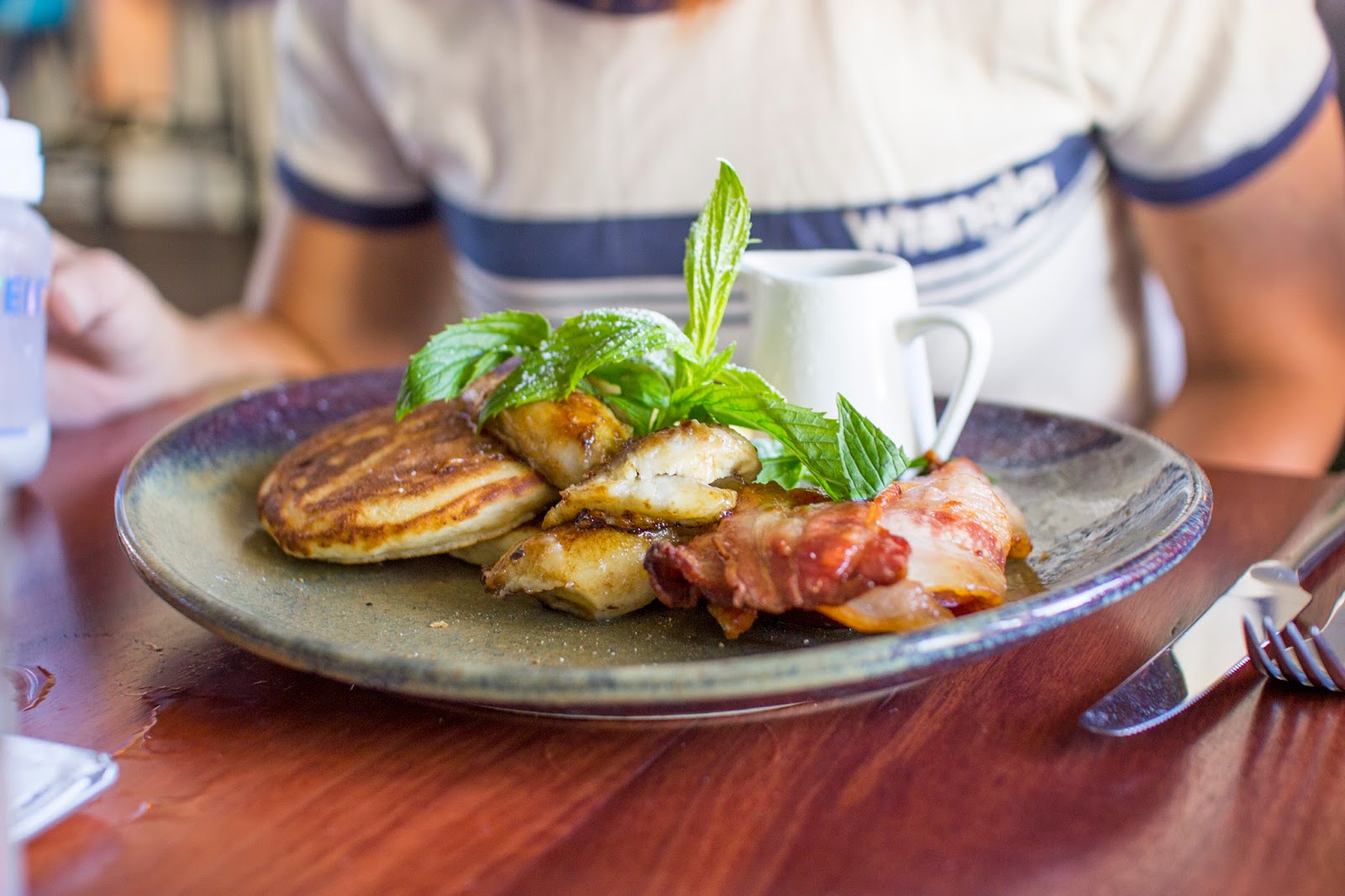 I’m hazy on the prices of the dishes we had that morning as I decided after the experience not to blog about it since it was so disappointing. However for the sake of this post, I’ve decided to include this to show the difference between our first and second visits here.
Dishes ordered were:
The most successful dish of the four was the avocado, however it was described as pretty ordinary with a need for seasoning. It was nice to see that the eggs had been properly poached, offering a nice gooey torrent of yolk when pierced.
The pancakes were soft and relatively fluffy, but the bacon was a bit too soft (I feel like crisp bacon should be a mandatory). It was a bit clumsy, but again – not a bad dish. 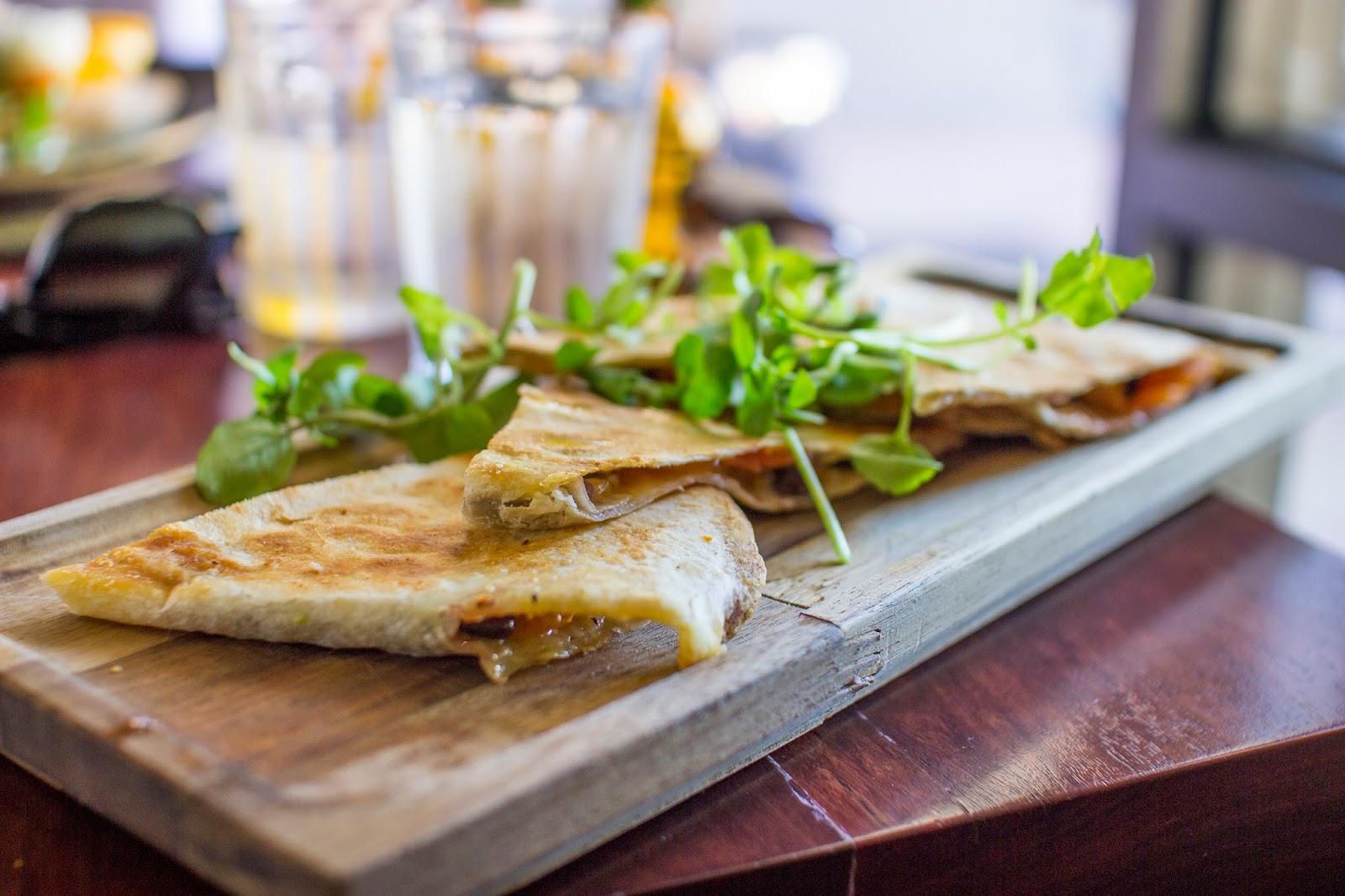 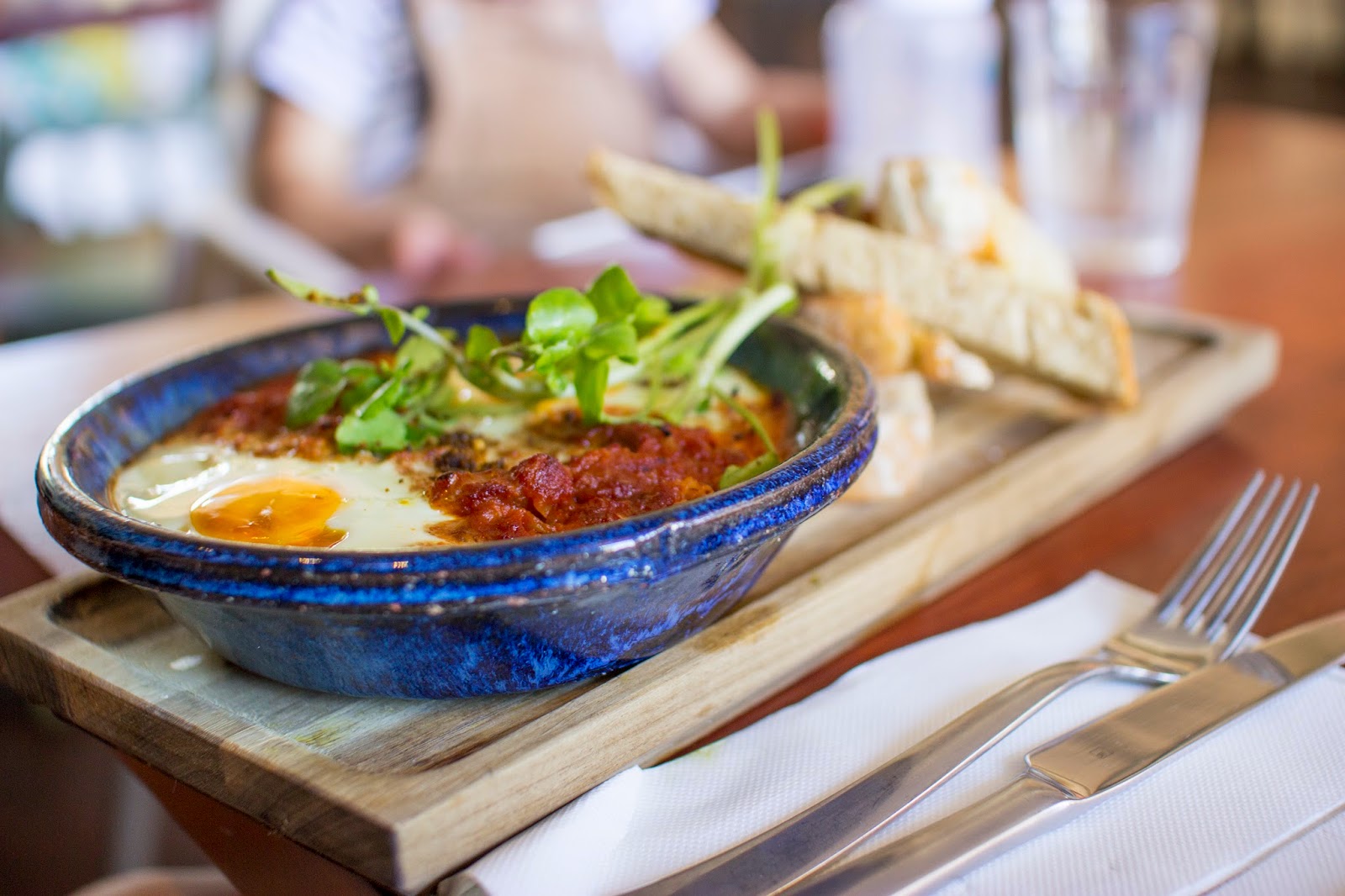 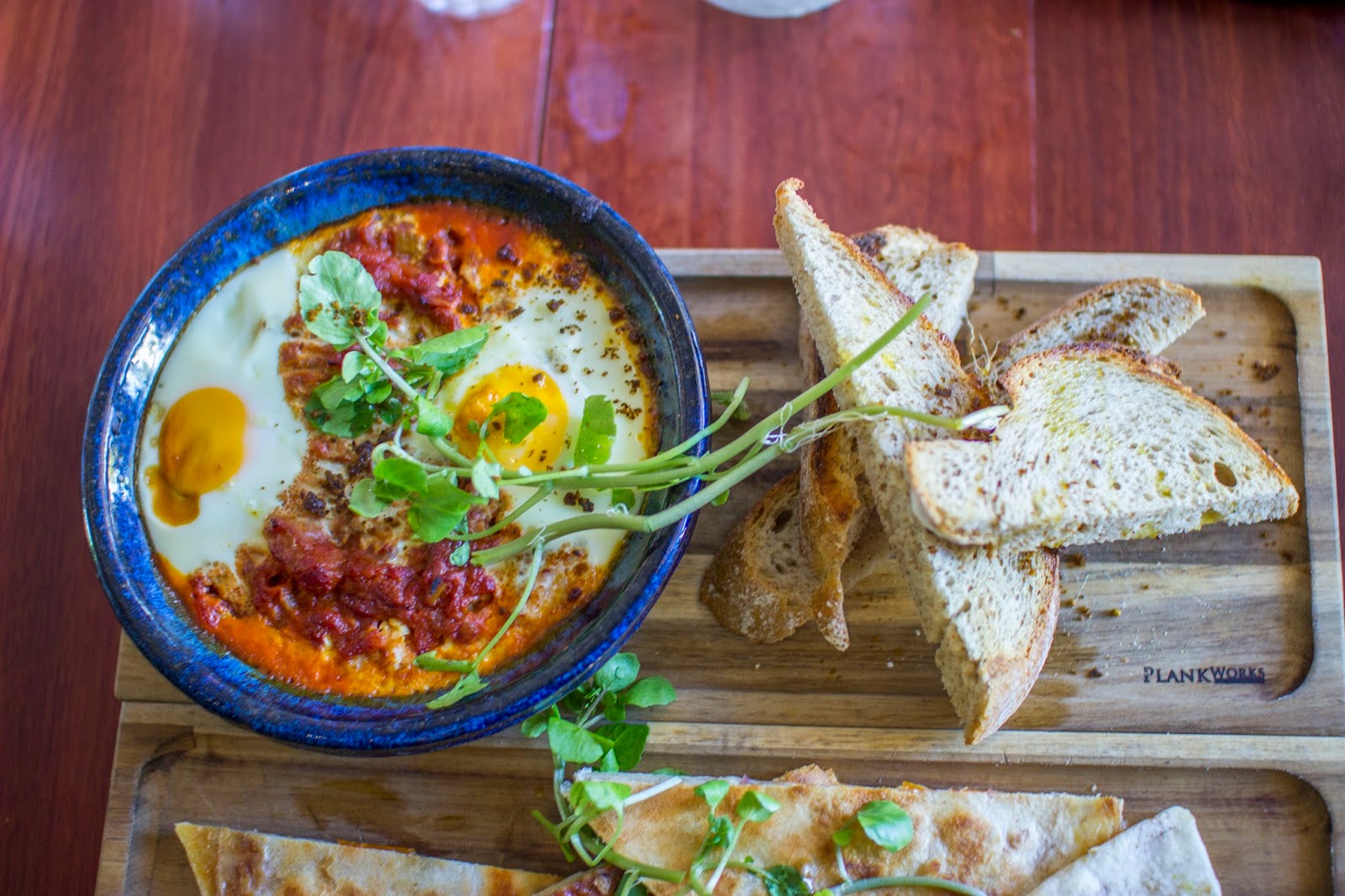 Sadly my quesadilla was really disappointing. I loved the sound of the ingredients as I’m a bit of a fiend for all things beans and I thought ‘smoked cheese’ was an interesting addition in terms of flavour. The actual execution was lacking, with the black bean barely present and the smokey taste undistinguishable. There was tomato included inside which overpowered the other ingredients and appeared to be the dominant flavour despite not being mentioned.
By far though the worst dish was poor Bryony’s which we had thought sounded the most promising. The tomato sauce had a nice enough flavour, though we did all have a bit of a chuckle at the ‘deconstructed chicken sausage’ which was more just the mince from inside. This was all something any of us could have lived with, but the eggs were so overcooked her knife literally (this actually happened) bounced off them when she tried to cut in. Forget yolk porn, they were rock hard. She was unfortunately left unable to eat this dish – which to the staff’s credit they removed it from our bill.
I hate experiences like this, where you can’t help but feel like you don’t have many positives to say. I really wanted to like The Old Laundry, but after such an occurrence, I was left a little scarred. However a part of me hoped it was a one off because the space is absolutely gorgeous, and I’m a sucker for aesthetics! 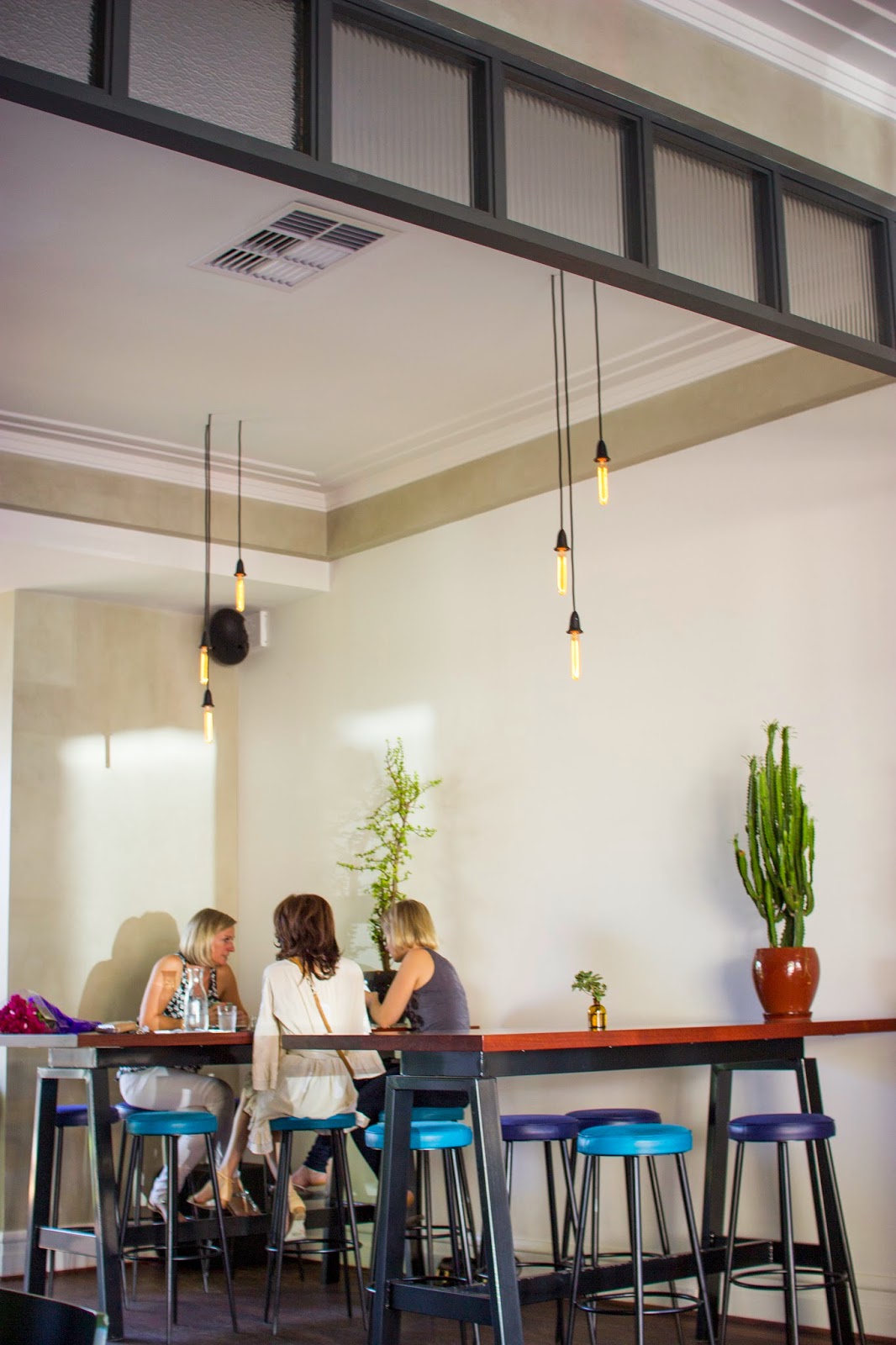 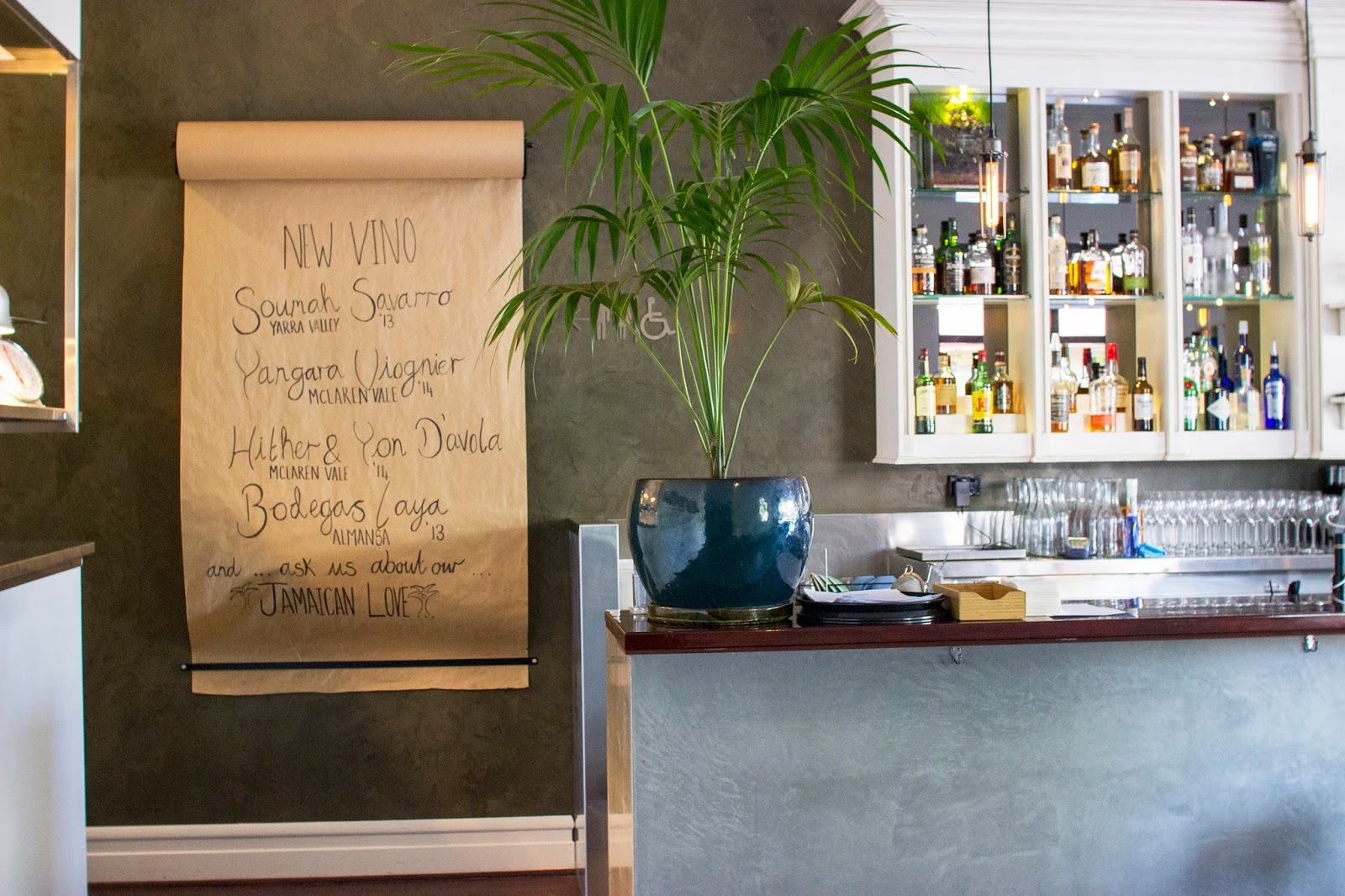 Oh how things can change in just four weeks! When I heard The Old Laundry’s breakfast chef had changed to one of my favourite local talents, Lisa Schreurs-Stone (who recently finished up as the Head Chef at Mrs S) and a new menu had been released, I was quick to contact Bryony to arrange a revisit.

I had an extra day off after the ANZAC Day long weekend, and we both agreed it was the ideal time for that revisit. I had no idea what the menu contained except that there was a pop tart (regression to my childhood here I come) and that it had only launched a couple days prior. I didn’t really mind though because I had faith that our first visit to the venue would be a memory long forgotten by the time we’d dined again. Fingers crossed anyway! 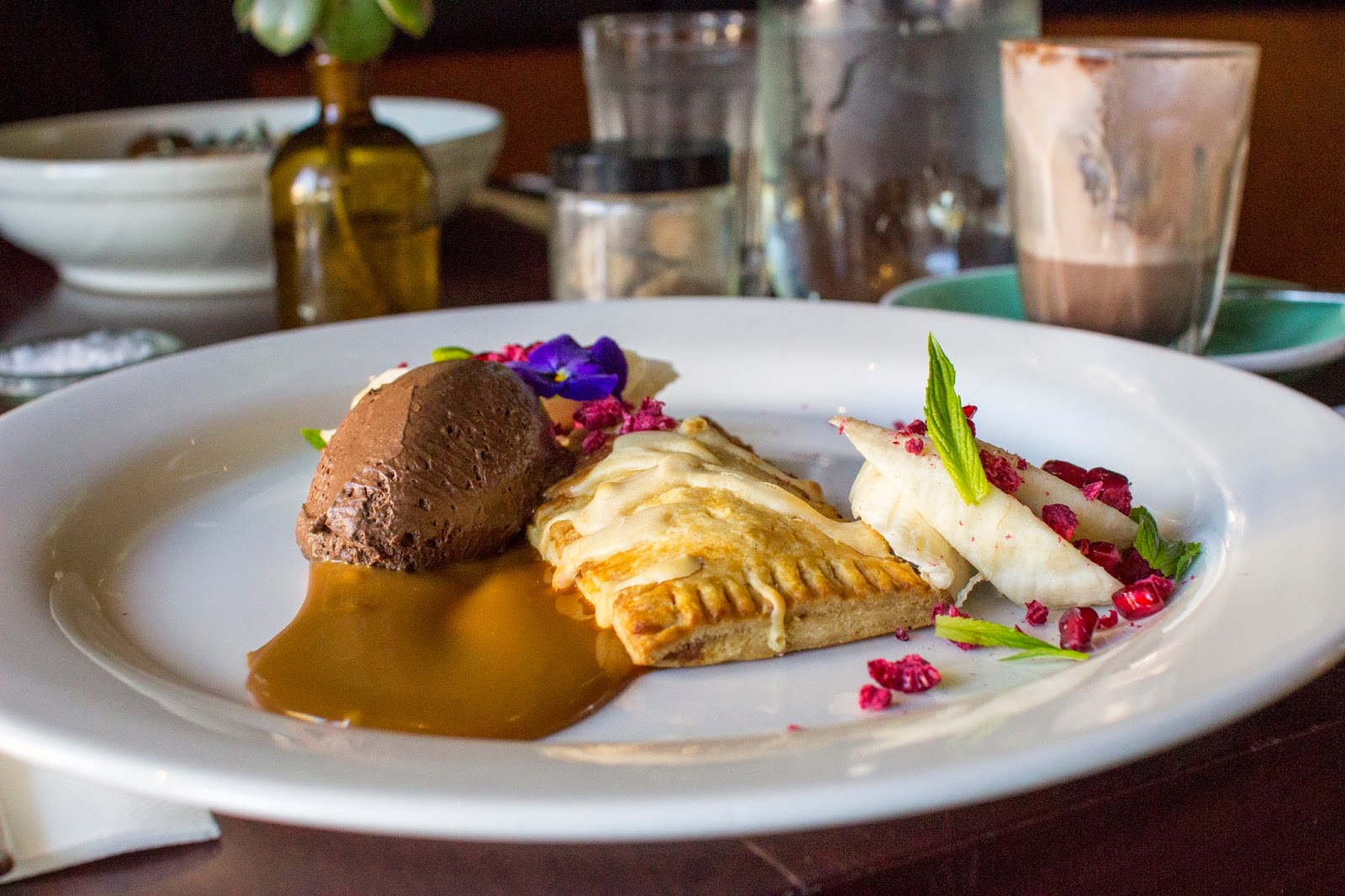 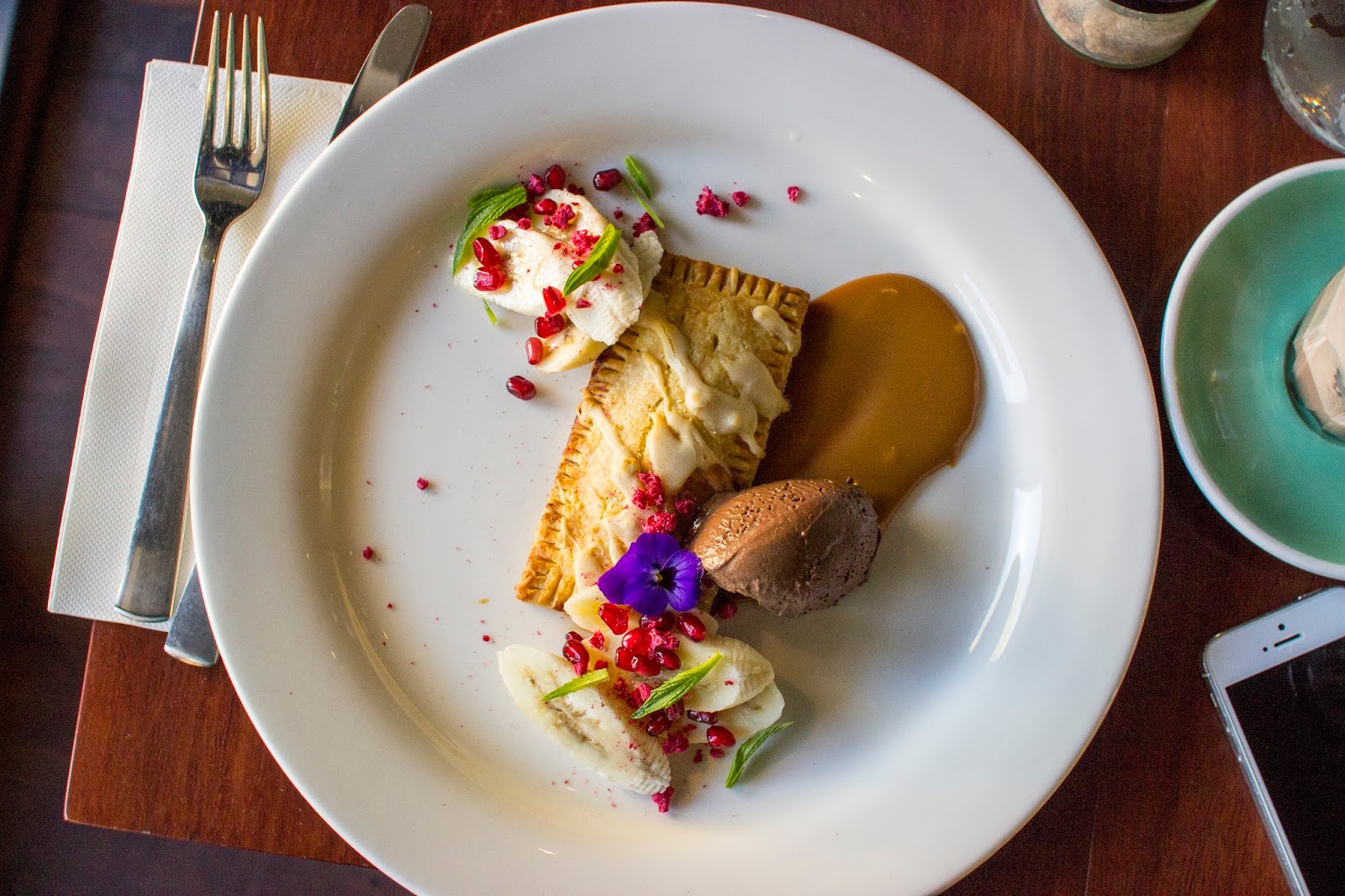 Before we even saw the menu I knew that I wanted the pop tart ($17.50) on their menu after spying it on Instagram. Filled with a peanut butter and three berry jam, it was lovely and crumbly pastry with a well balanced centre. The light scoop of chocolate mousse is bitter but a nice compliment to the salted caramel. And then there’s fresh slices of banana, pomegranate seeds and sprigs of mint.
I would have thought having so many ingredients on the plate would make this dish a little confused, but the reality was actually an extremely tasty and cohesive meal. I was a little devastated when it came out since the waitress told me it was two pop tarts when it was only one, but the taste made up for this oversight – and since the menu was new, I couldn’t blame her too much.
It’s a really good dish, though I was still a little hungry after. I think for a piggy person like me, I would share this with someone else as a sweet ending after another dish! Haha yes, I do suffer from over eating. 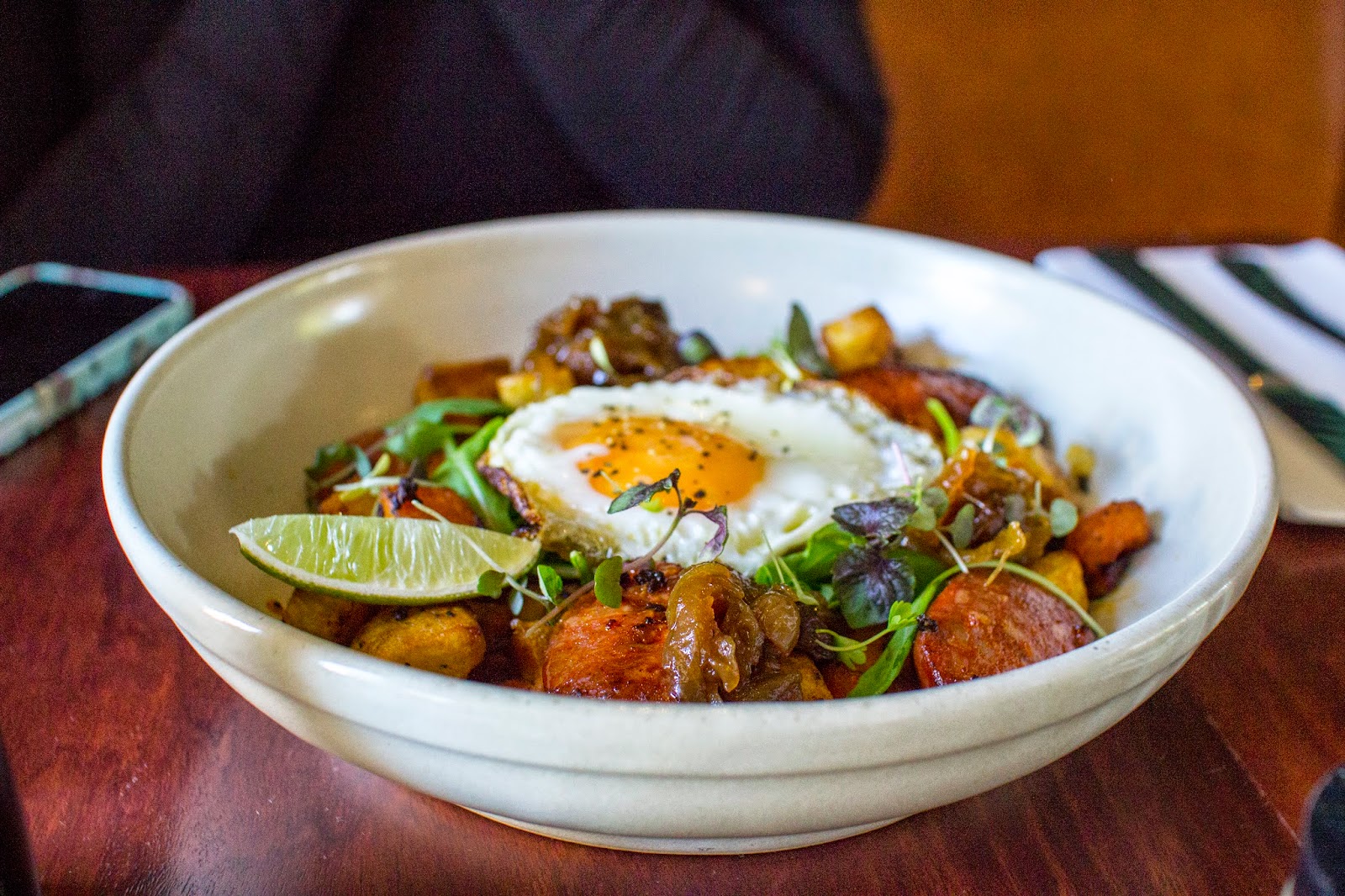 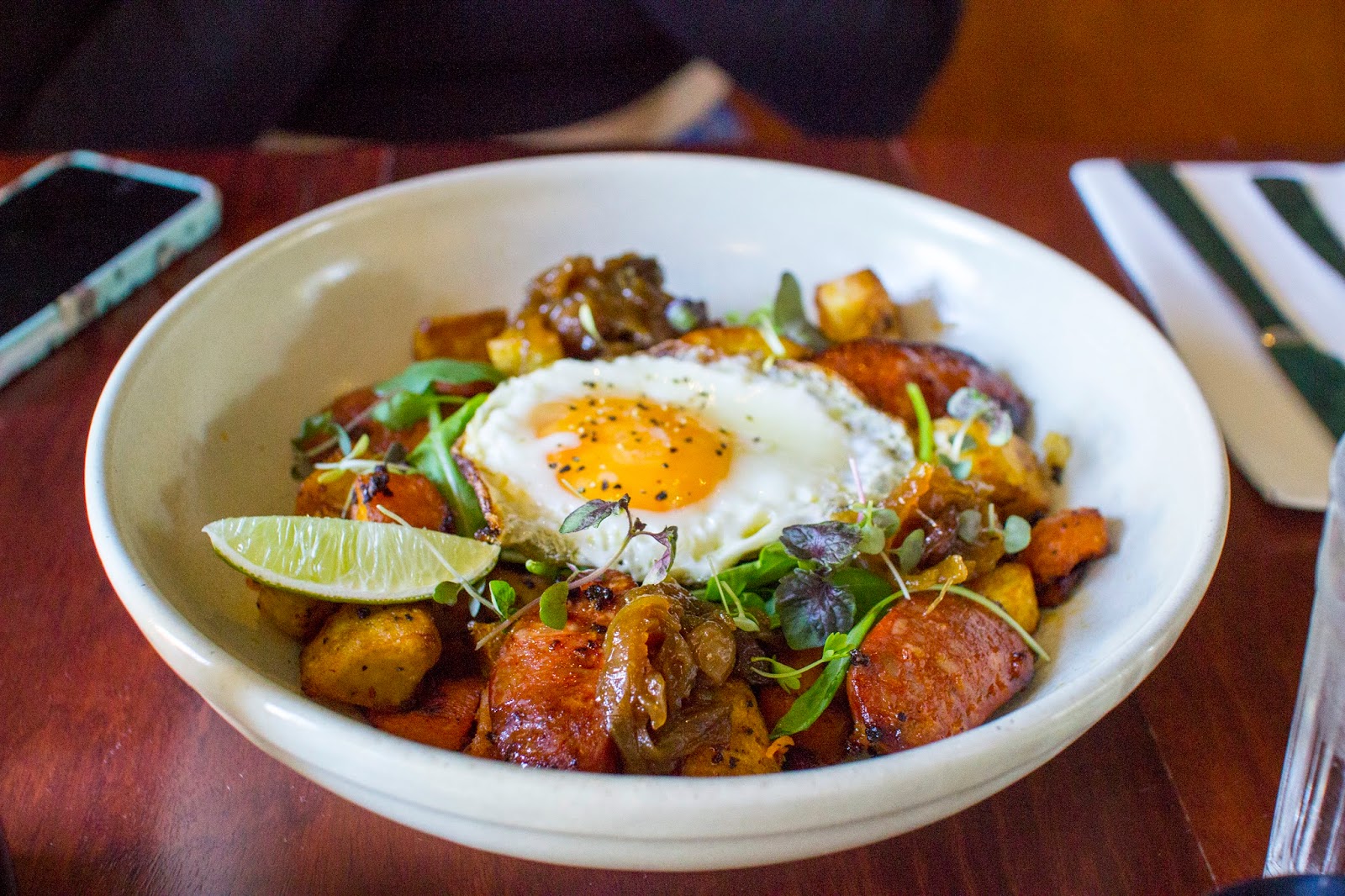 Bryony orders the savoury dish that also caught my eye – the sweet potato and chorizo hash (I think this was around $17.50 too) which comes with greens, caramelised onion and a sunny fried egg. I really enjoyed this dish too! The chorizo was meaty and just lightly grilled, as opposed to other venues which can often over grill the meat causing it to become tough or chewy.
The blend of sweet potato and potato gave the dish substance, and the squeeze of lime over the top injected some acidity to balance the flavours. I actually really love a good fried egg, it’s a cooking style at breakfast that tends to get overlooked these days for a poached or slow cooked. This one definitely had a nice gooey yolk which is all anyone can ask for in an egg dish!
So I guess you can say The Old Laundry easily redeemed themselves in my eyes after such a positive return trip. I’m looking forward to a third trip there, to indulge in a prosciutto toasted sandwich or to get down with their baked eggs. So many options, so little stomach space!

A final brunch for 2018 at Open by Duotone

By name and nature it’s BOHO

Getting smokey at Burger Bistro

Focusing on the goodness inside me 💕 I’ve be

Pho-get about everything else, this is all I need

When the obsession is mutual 🥺

Never underestimate the power of a good sandwich.

It’s not easy being green but dayummm it’s tas

Ughhh this bread - it’s worth a trip to @manukaw

Surround yourself with amazing people and life fee