Burgers and ribs at De Cribs 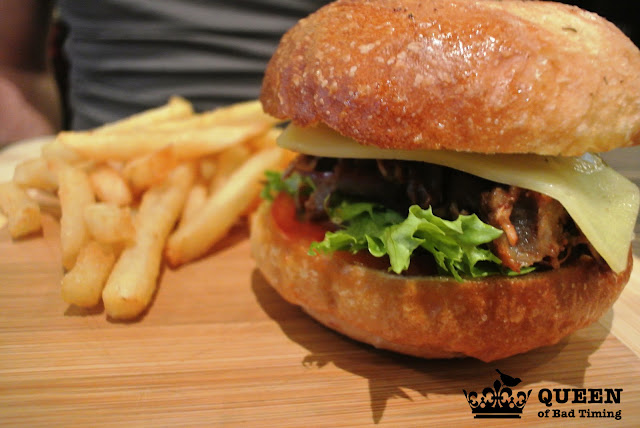 As an Entertainment Book holder, every now and then some new restaurants are added to the gold card discount section which offers some great reductions in price like 25% off. Last week I received an email letting me know about a new discount at a place called De Cribs, which I hadn’t heard of before.

I didn’t think too much of it, until it came to Saturday and Jeremy and I were mulling over our plans for that night. While we sat on a street corner like massive bogans, chomping away on our Tuck Shop take away pies (amazing!) he scrolled through Urbanspoon, looking for some options for dinner. It was by chance that he stumbled upon De Cribs and my memory pinged while my stomach rumbled in agreement at the thought of ribs.

Yes, that’s what this place is all about. Their menu is pretty strange, a small selection of heavier mains that focus on ribs (lamb, beef and pork) or burgers that use rib meat. But the entree section is an odd mishmash of your standard fare such as bruschetta and onion rings, and then there’s dishes like crab tian and tea smoked duck. I have to admit, it doesn’t quite gel.

We made a booking for 6.30pm and arrive to see a nice simple restaurant with a great look out at East Perth. It’s a strange location, situated right under a stack of apartments right there in suburbia. When we get there, there’s only one other table and they greet Jeremy by name so we quickly realise we may be the only reservation for that night.

It feels pretty strange as we’re seated in the middle of the restaurant and the ambiance is amiss – the staff are ever watching and there’s not enough noise to make you feel comfortable. I think if more people were inside, then it might change the feeling inside slightly. That said it does have a nice courtyard out the front which would be nice on a balmy summer night.

I’m starting to get a bit of a headache so we order straight away, choosing the slightly out of place entrees. 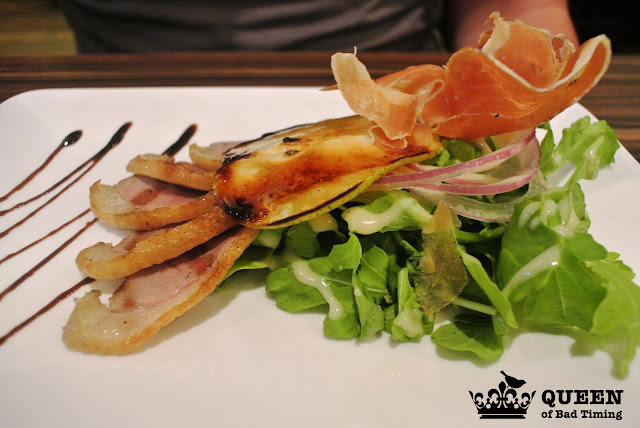 Jeremy chooses the Smoking Duck ($17), which is duck smoked in a special tea, combined with grilled pear, prosciutto, red onion and rocket. It arrives quite beautifully plated which does surprise me considering I’ve seen the more rustic dishes like those onion rings going out to the other table.

The duck is extremely flavoursome but the fat under the skin hasn’t rendered at all and has a chewiness that I’m not particularly keen on. The pear is really flavoursome and has a nice little char. All up it’s a pleasant but not overly impressive dish. 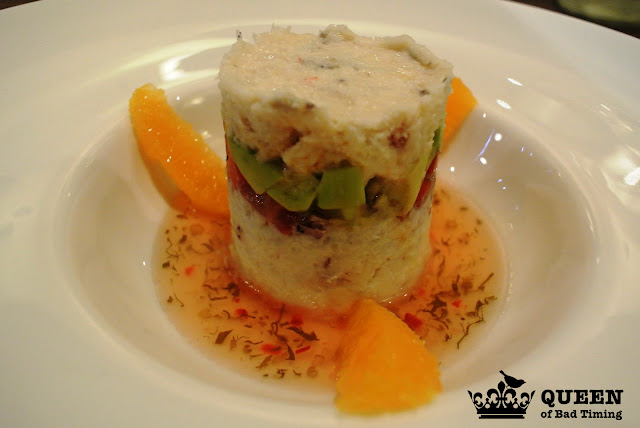 I choose the Tian of Crab ($17), which is a layered dish of crab meat, tomato and avocado. It’s surrounded with a lime, coriander and chilli dressing and mandarin segments.

I like the construction of this dish though the crab meat is a bit too mushy and creamy which reminds me of tinned fish. While it does taste like crab, the extreme zinginess of the sauce makes it a bit hard to decipher whether my suspicion is correct. That said, it is a light entree and the fresh vegetables inside are bursting with flavour. I particularly like the segments of mandarin since they offer some great acidity and sweetness.

Once we’re finished, the staff are prompt to clear our plates which is a great sign of attentive service. Hopefully they keep this up if this place gets busy. Fifteen to twenty minutes later our mains arrive.

Jeremy has ordered the De Burger (pictured at the start). The pricing is a little strange for this – they allow you to choose your meat from lamb, beef or pork – but the pricing changes depending on the meat you choose. I understand that some meats are more expensive than others, but I would think it would be more desirable to pick a mid-range price for all three so they’re the same. However that’s just a personal opinion!

He chooses the pork burger ($19) which is made of hand pulled rib meat topped with cheese, mix lettuce, tomato, red onion and bacon, plus aioli and special BBQ sauce on a sourdough bread roll. On the side it comes with some crunchy fries.

I love the presentation on the wooden board; and dive straight into his chips when invited. While the entrees didn’t quite hit the mark in my eyes, the chips are phenomenal. Crunchy, just slightly oily and a good shaking of salt. My only complaint is that there isn’t enough!

Jeremy tells me his burger is nice, though he wishes the meat was more tender. The BBQ sauce is pretty delicious and makes it a bit different to other burgers elsewhere. 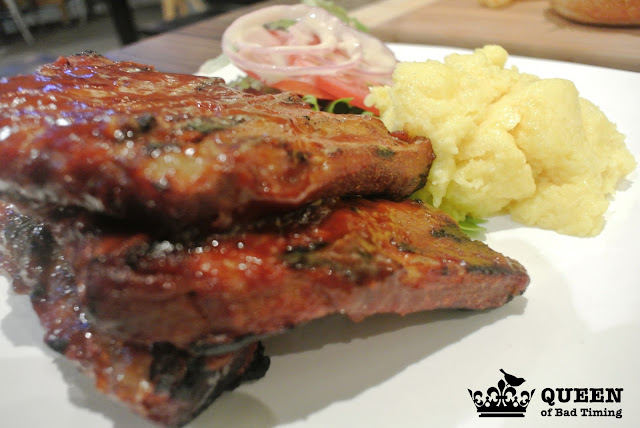 For my main, I choose the Pork Ribs ($39.50). These are the most expensive of the ribs with the beef being $29.50 and the lamb $34.50. I have to admit the price does deter me but since it’s such a jump from the cost of the burger, I assume the serving will be huge and that I can share it with Jeremy.

The description sounds amazing – “marinated for 24 hours, slow cooked to mouthwatering perfection then finished on a char grill where they are glazed with De Cribs special sauce (original, honey or smoked)”.

I choose the honey BBQ sauce and the Royal Blue mash potato as my side dish. I absolutely love ribs and so I’m looking forward to eating these! When they arrive I have to admit I am taken aback somewhat at the price. It’s three rather stubby small racks of pork which might be a decent size for a price range of mid-twenties. But not for fourty dollars! And I can already see there’s not enough sauce for my liking since ribs are best eaten as messily as possible.

I use my fork to touch the ribs; hoping the meat will flake off as you would expect for a 24 hour slow cooking process. Sadly it isn’t the case – there are a couple ribs here and there that do live up to the expectation but the rest require my steak knife to get through them.

The mash potato on the side is a little lumpy and more buttery than I’m used to. I actually do like the taste though, it works well with the sweetness of the rib sauce.

Unfortunately my headache starts to roar up then so I pass the plate to Jeremy to complete before we pay straight after and head off. It’s a shame because I didn’t get dessert (damn!) and I did spy a chocolate trifle that I would have liked to try.

I have to say that though my headache didn’t really help, I found our night out at De Cribs a bit hit and miss. I think this place has great potential – it could be something great once they find their rhythm. Since it has only opened in November last year, I can imagine that they’re still ironing out some bugs. I like the concept (who doesn’t love ribs) so I hope that things pick up for them. I did feel a bit sorry for them at how quiet it was so I was pleased to see a couple tables arrive as we were leaving.

A knockout lunch at Binchotan Grill

A relaxing public holiday meal at Bills Bar and Bites