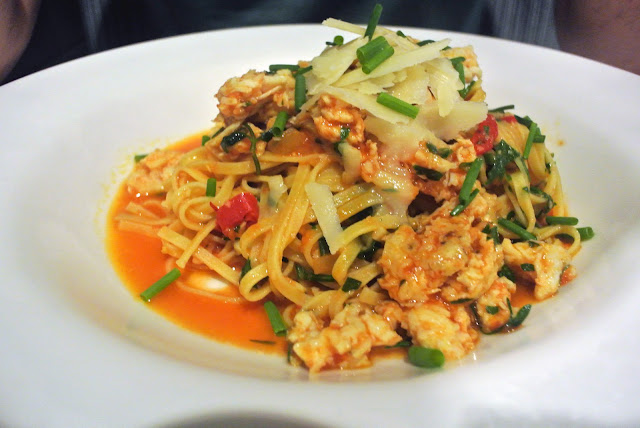 Once upon a time, Italian restaurants littered the city of Perth more than flies in summer. It didn’t matter which way you looked, there you’d find this classic cuisine which offers carbs upon carbs in the most delicious manner possible.

In those days each nouveau restaurant was attended by the who’s who. Caliente cliques that celebrated dishes outside the traditional fare of spaghetti & meatballs or margherita pizza. Funtastico was one of these places. Extremely popular in the early 2000’s, for me it brings back memories of meals out with my girlfriends where we’d all get dolled up and live for a moment in a world that seemed so foreign to us.

It had been a couple years since the last time I’d visited this place in Subiaco and it’s had a renovation. The once upon a time red decor has been replaced by an almost mirror ball like black slick of paint but still retains its emphasis on the staged open plan kitchen and giant pizza oven that churns out order after order.

After a night out at the Brisbane Hotel for a birthday, Jeremy and I found ourselves headed this way; our stomachs very much demanding some delicious pasta stat. Though there were a few options in Northbridge that seemed viable, we decided to avoid the Christmas Pageant crowd and try Subiaco. After all, in the depths of my memory the food here was always so nice.

We arrive around 8.40pm which is a little late for my liking but there’s a couple empty tables so we hope that we’ll be seated straight away to start eating. However our plan doesn’t quite work out and we’re told to take a seat at the bar for 10 minutes which soon turned into over 20 minutes. We were nearly ready to leave when finally we were shown to our table (which had been empty the whole time we’d been waiting – though could have been a no show booking). 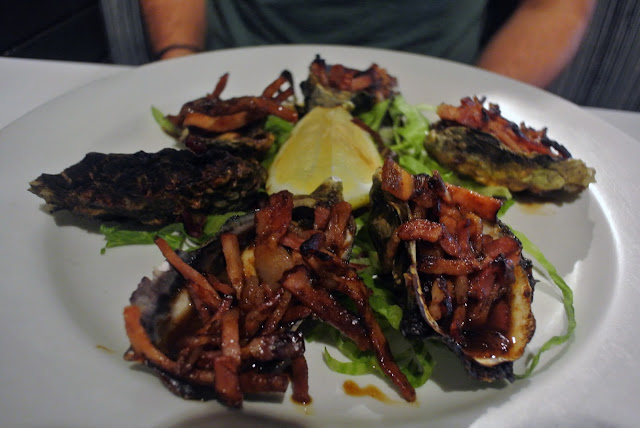 We start off with a drink each as we discuss our food options for the night. The drinks come out quickly but there’s no water offered or automatically given. It’s not until halfway through our mains I actually had to ask for them – pretty disappointing service given how many staff were working.

We start the night off with a half dozen oysters each. Jeremy gets the Kilpatrick ($21.00) and I get the Natural ($20.50) which comes with a lovely mignonette dipping sauce.

When it’s not a seafood restaurant, part of me does worry about the freshness of oysters. But thankfully these were beautiful; creamy and tasting of the ocean. The squeeze of lemon over the top gave a nice burst of acidity and the vinegar rich mignonette was zingy and vibrant. Jeremy’s oysters were smokey from the barbeque sauce and burst in your mouth with creaminess while offering a nice crunch from the mounds of bacon teetering on top. Both sets were really delicious so we were happy to offer one another a couple to swap – getting the best of both worlds. 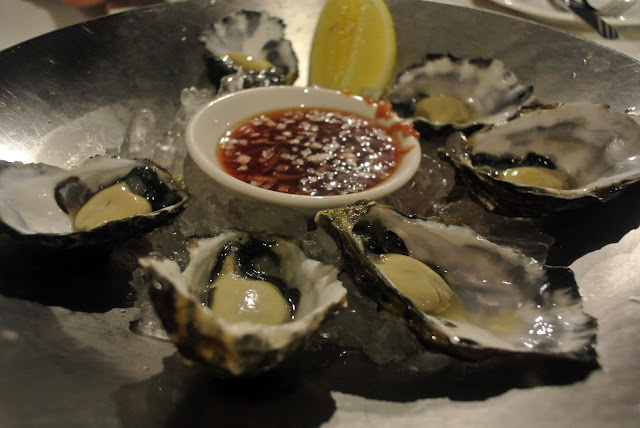 Since we’d come here for pasta, a great amount of time was spent pouring over the menu to decide what we’d get. There were a lot of options that all sounded amazing and since we were sitting really close to the kitchen we were seeing some phenomenal looking meals come up for service.

Finally after asking for the specials of the day (not having them offered to us), we settled on our meals. Jeremy ordered the Taglierini e Crab ($33) which was local blue swimmer crab tossed through taglierini with fresh tomato and chilli.

It comes out in a smoking pile of pasta and an extremely generous serving of crab. The oil based sauce is light and delicate, the chilli really singing out with each bite. But the crab is definitely the best thing about this dish – it’s plentiful, fresh and succulent. I find my fork venturing over to his side of the table a few times to steal some bites of this wonderful seafood. 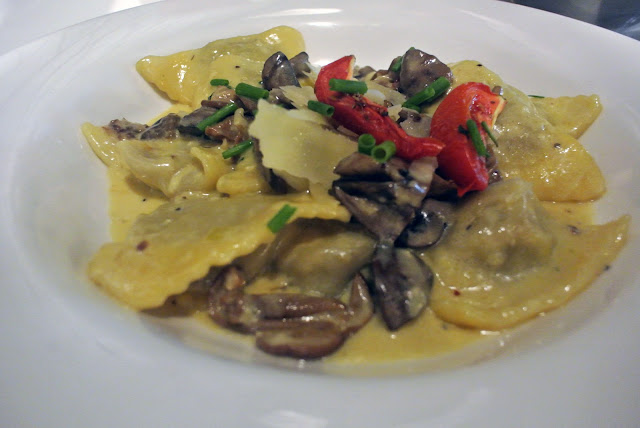 For my main, I choose the pasta special of the day which is Beef Cheek Ravioli with Porcini Mushrooms ($29). While the roasted tomato slivers on top don’t add any value to the dish, everything else on the plate is perfection.

The ravioli is a little thick but is cooked al dente so it works really well – it actually is preferable for this filling than a thinner pasta. The beef cheek inside is, for lack of a better word, ridiculous. It is so tender and soft; having been slow cooked to the point that it fell apart with the slightest probe of my fork. The porcini mushrooms still have a bit of yield to them and soak up the creamy sauce that surrounds them in a way that seems to enhance their flavour even further. 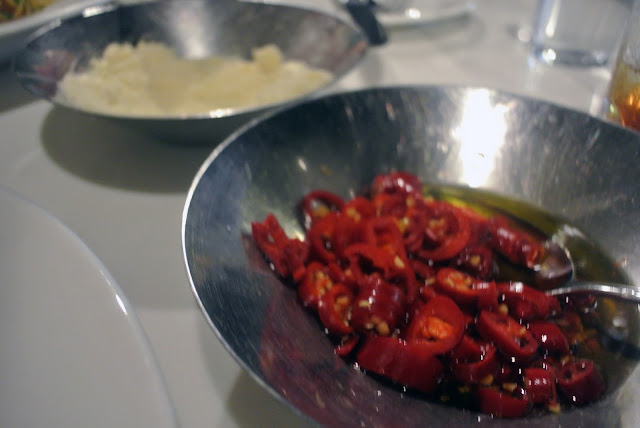 As our pasta dishes are placed before us, we get two little servings of chilli and parmesan to accompany them. It’s a nice touch because it means we can add them as we go – and I do love my parmesan cheese. The chilli oil is also really nice to drizzle over the top though doesn’t have much kick to it.

When we finish up every last bite of our mains, our plates are cleared away relatively quickly. However that seemed to be the last time we were attended to. No offer of a dessert menu to peruse, nor even a glance over to see if we were ready for the bill. In the end we had to get up and pay at the counter.

While normally I’m pretty laid back as long as the food is good, the service here really is appaulling. The waiter who offered us wine to start with seemed offended by our polite refusal (we’d already had a couple at the Brisbane so were all alcoholed out). He then reached over me to clear our wine glasses in a way that was intrusive and not really necessary.

The whole night was great flavours and impeccable food but the service leaves a lot to be desired. To be honest, it’s a little off putting which is a great shame when the food is as nice as it is here. I’m not surprised by the reviews of Urbanspoon after this revisit. I’m hoping that soon they’ll lift their game up and start putting the customer first – and if they do, I’ll be back straight away because they sure do know their stuff when it comes to pasta.

A Taipei banquet fit for a queen

An indulgent day at Hoodburger

A final brunch for 2018 at Open by Duotone