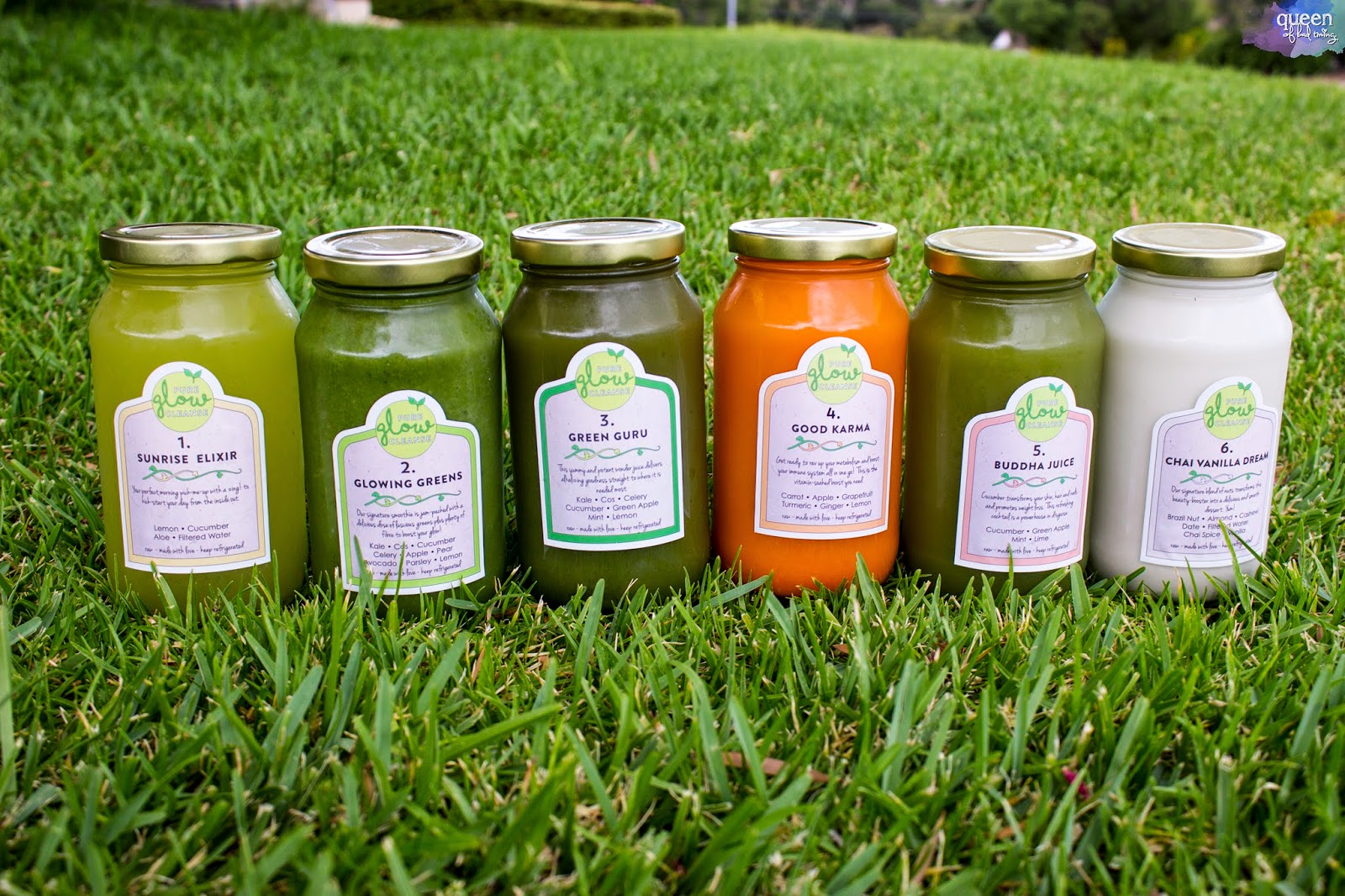 After an indulgent lead up to Christmas and New Year I was feeling a little on the bloated side and was looking for a way to give my body some much needed detox to get back to my chipper self. Doing my own thing with increasing salads, changing to granola for breakfast each day and enjoying more meat-free dishes was a good start, but when I was contacted by Annette (one of the co-founders) at Pure Glow Cleanse I realised this was the opportunity to take it to the next level.
I’ve always admired and loved the idea of a juice cleanse. I mean the benefits themselves (expelling toxins, more energy and nourishment) were enough to sell me, but I’m also a massive juice fiend so it felt right up my alley. So when Annette offered me the chance to try Pure Glow’s cold-pressed juices for a one day cleanse (valued at $75.00) I jumped at the offer and we quickly lined up a date for my day’s meal to be delivered.
Pure Glow provide juices on a Sunday, Monday, Tuesday or Thursday for delivery, with the suburbs available widening out a little further on Thursdays. They send you a text message when their 20 minutes away to give you the heads up which was good for me since I was out and about, and was able to head back. 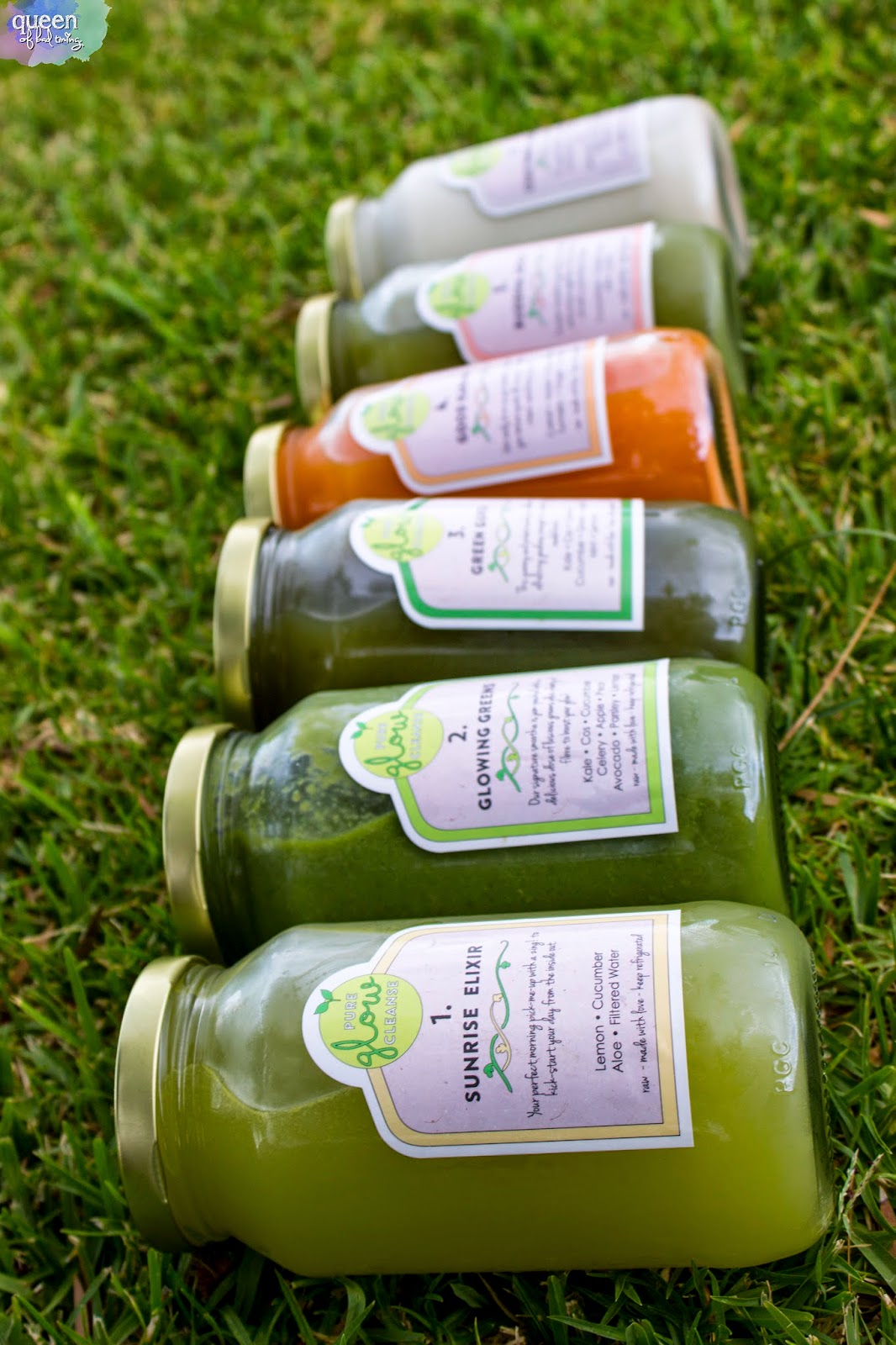 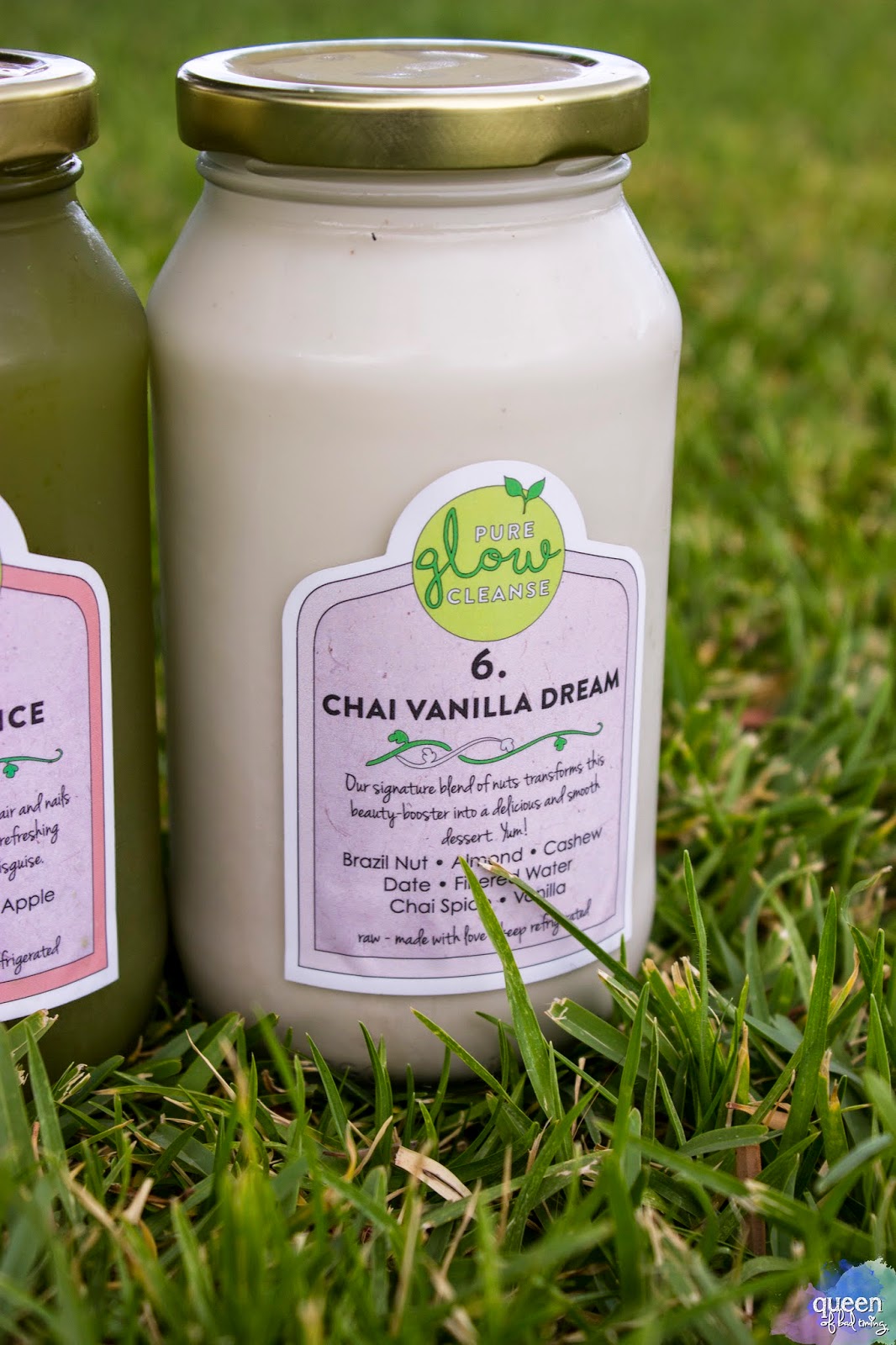 Preparing myself for the juice cleanse was easy as I don’t drink coffee, which they recommend people cut down on in the lead up. On the morning of my cleanse I awoke early, eagerly heading to the fridge to select my first icy cold beverage. The jars are conveniently numbered in the order to drink them, with instructions to sip slowly and take a break when you feel sated. They also come with some cute little straws which is a nice touch.

The first juice is the ‘Sunrise Elixir’ which is a zingy concoction of lemon, cucumber, aloe and filtered water. It’s an acidic drink which definitely gets me energised for the day ahead. At first I was worried that the absence of a solid breakfast would leave me starving but I actually felt good at that stage and ready for the day ahead (which was a Friday so I was slightly apprehensive over how I would go that night). 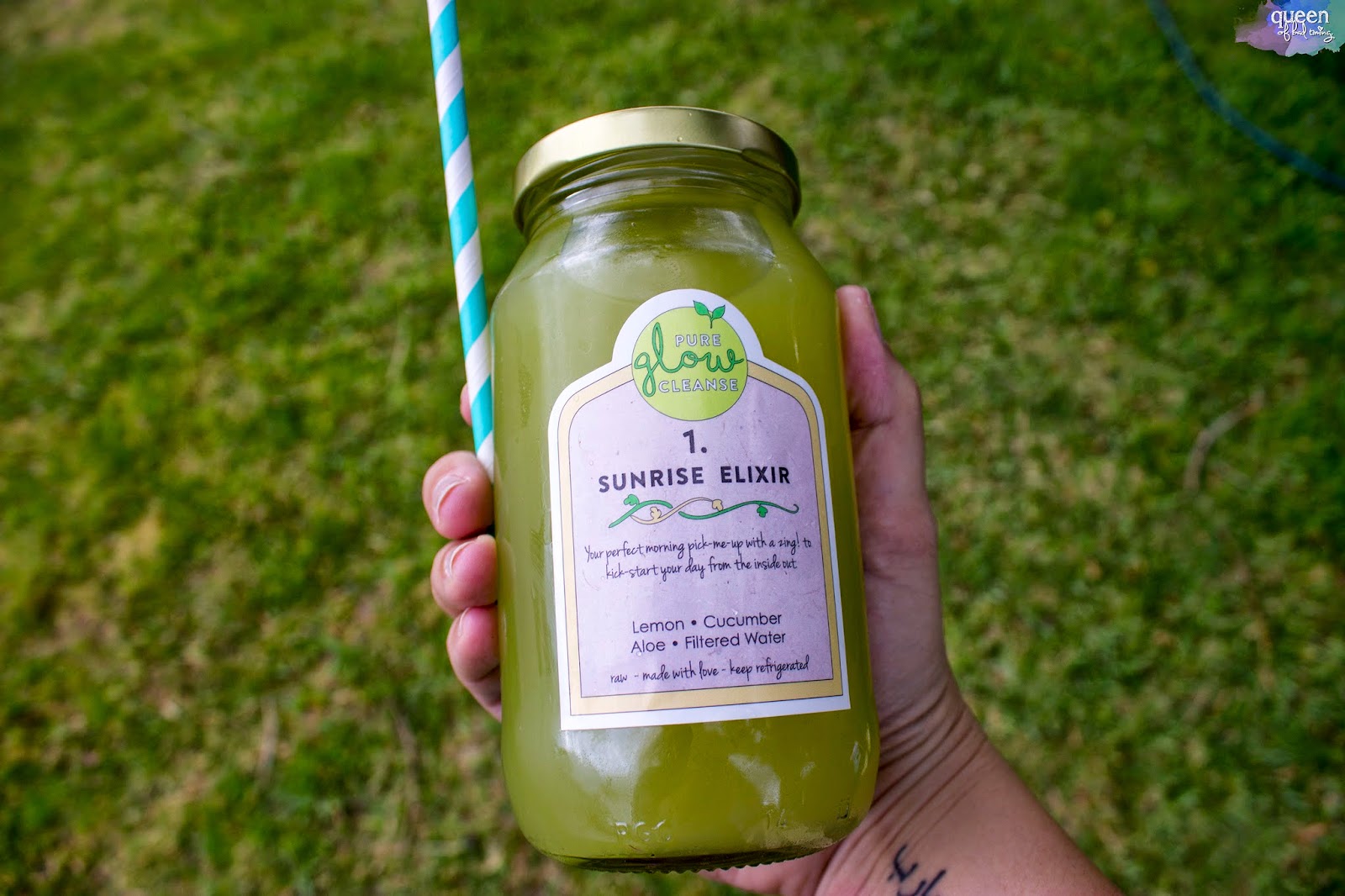 About two hours after I finish the first juice I feel my stomach growling a little so I open the second which is called ‘Glowing Greens’. This jar was filled with a thicker smoothie this time around made of kale, cos, cucumber, celery, apple, pear, avocado, parsley and lemon. I have to admit I wasn’t sure whether this one would be something I’d enjoy just given the heavier dominance of vegetables. Pure Glow definitely seem to be conscious of sugar intake as their juices are loaded up with veggies and small quantities of fruit.

However my worries were unfounded I realised as I took my first sip. The apple and pear taste is stronger than the other ingredients, the texture thick and for the most part smooth. The weight of this smoothie resulted in me taking my time to sip it slowly, and once I’d finished I was feeling quite satisfied. 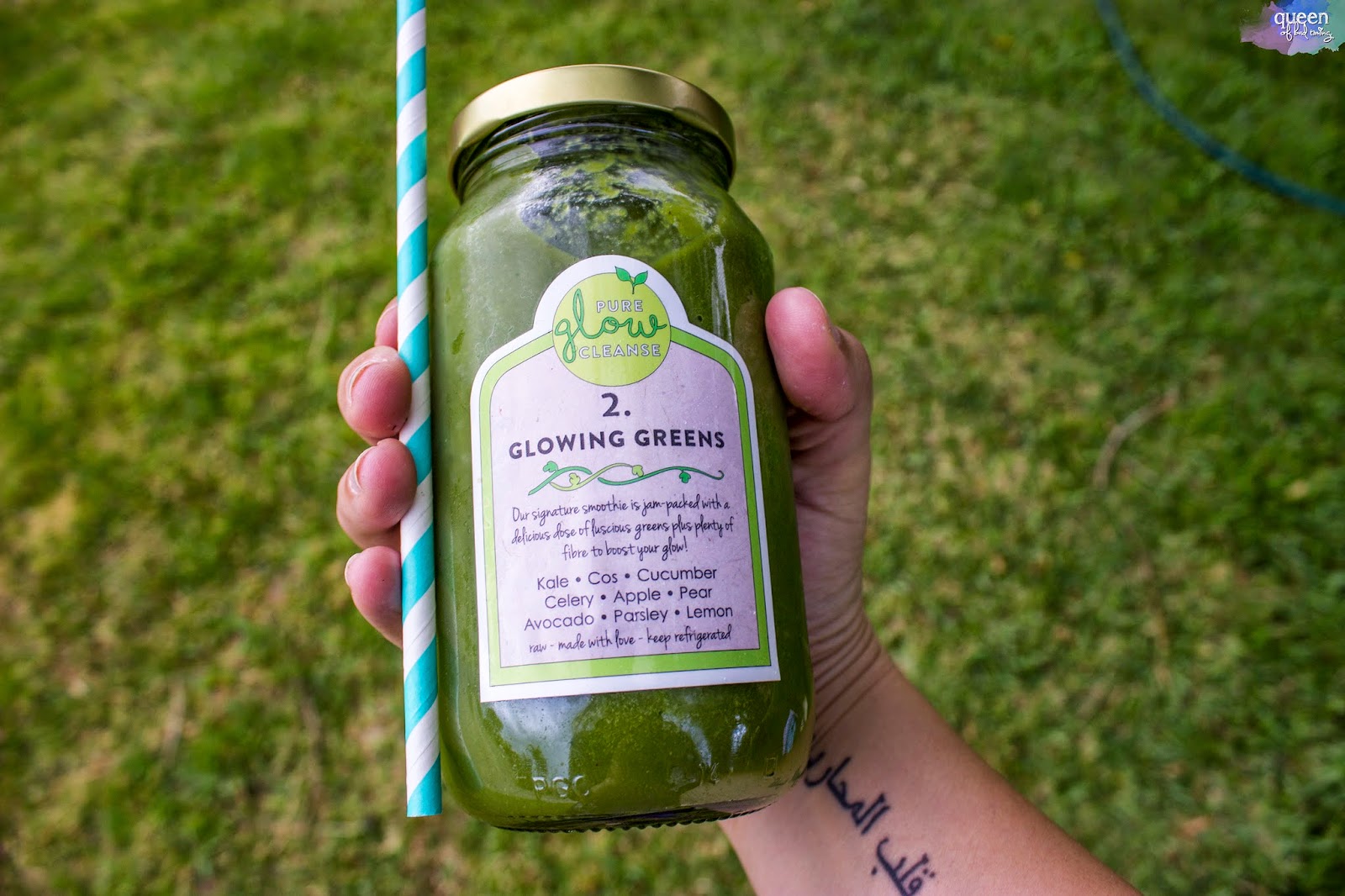 My third juice was the ‘Green Guru’ and was jam packed with green goodness in the form of kale, cos, celery, cucumber, green apple, mint and lemon. This smoothie was a little more gritty than the previous ones, with the green apple and mint flavours strong. You can definitely feel how restorative this is for you in each sip, with every mouthful chocked full of goodness. 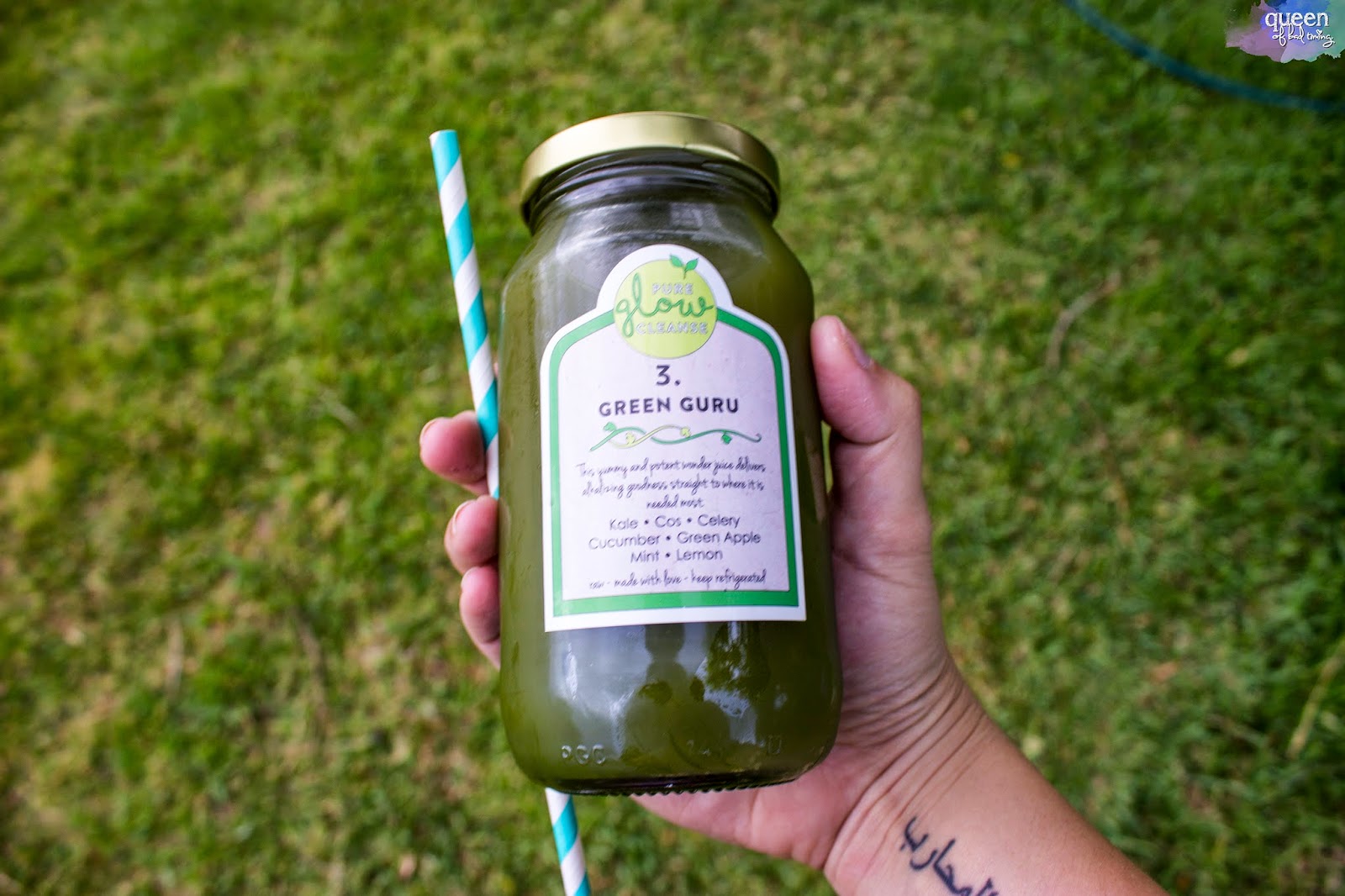 Around 3pm my fourth jar of juice came out of the work fridge, it’s glass walls frosty and cool. Definitely the most vivid in colour this one had carrot, apple, grapefruit, turmeric, ginger and lemon.

Looking back at all the drinks I have to say this one was my least favourite – I’m not much of a ginger in juice person even though I know how good it is for you. The flavour was very strong in ginger which meant it wasn’t quite up my alley, though I know my boy probably would have loved this. One day I’ll get on the ginger bandwagon I’m sure!

But in case I don’t, next time I can keep in mind that you can actually swap flavours if there’s one you don’t like as much as others. It’s great to hear they’re flexible and cater to their customers at Pure Glow.

I sipped this one slowly as by then I was actually starting to miss real food, and didn’t want to just inhale it quickly. The biggest tip I have for anyone going on a juice cleanse is avoid instagram! If you’re anything like me, your feed is clogged with picture after picture of food. It’s not that you get hungry, it’s just more you think you should be if that makes sense! 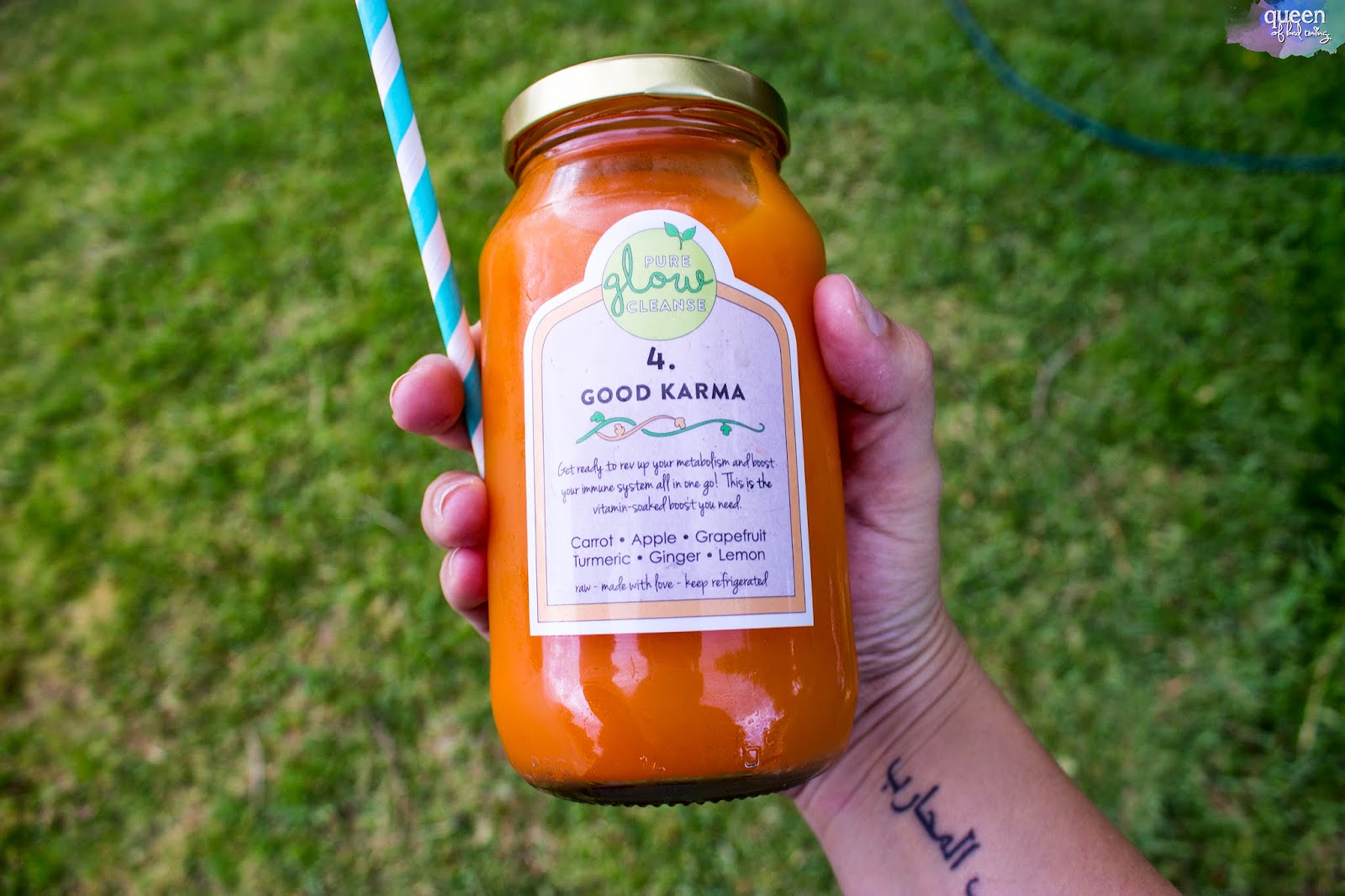 After work that day my girls and I caught up to watch The Wedding Ringer (hilarious: we are all huge Kevin Hart lovers) so I brought my remaining two juices with me in a little cooler bag. Number five that day was opened while waiting for the movie session to commence, and ‘Buddha Juice’ was a thinner, fresher concoction of cucumber, green apple, mint and lime. I really liked the flavours in this juice, it was really refreshing thanks to the use of cucumber. It was after this juice that I actually started to feel quite full and finally stopped thinking about food (I’m sure a normal person would have stopped miles before, I’m just a little obsessed). 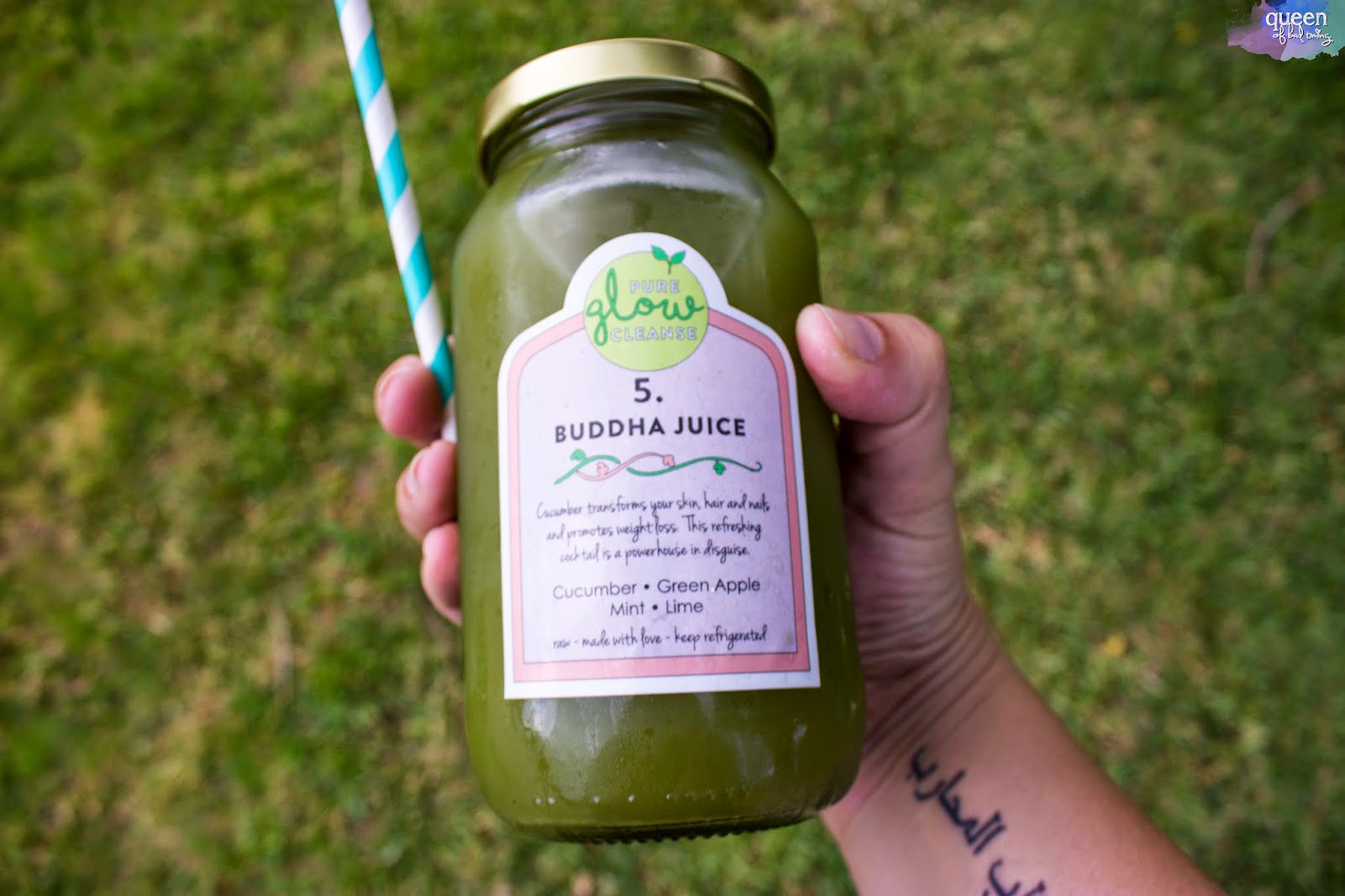 The final drink for the evening (which I consumer while my friends ate dinner – it was a little agonising) is the chai vanilla dream which is made with brazil nut, almond, cashew, date, filtered water, chai spice and vanilla.

This was definitely my favourite juice even though it’s thin, the protein from the nuts makes this substantial. The chai spice and vanilla are a lovely flavour pairing, working in sync to make this seem like a milky drink even though there’s no actual dairy. I thought of it as a dessert drink, and really enjoyed it! Out of them all, this juice is definitely one best served icy-cold. 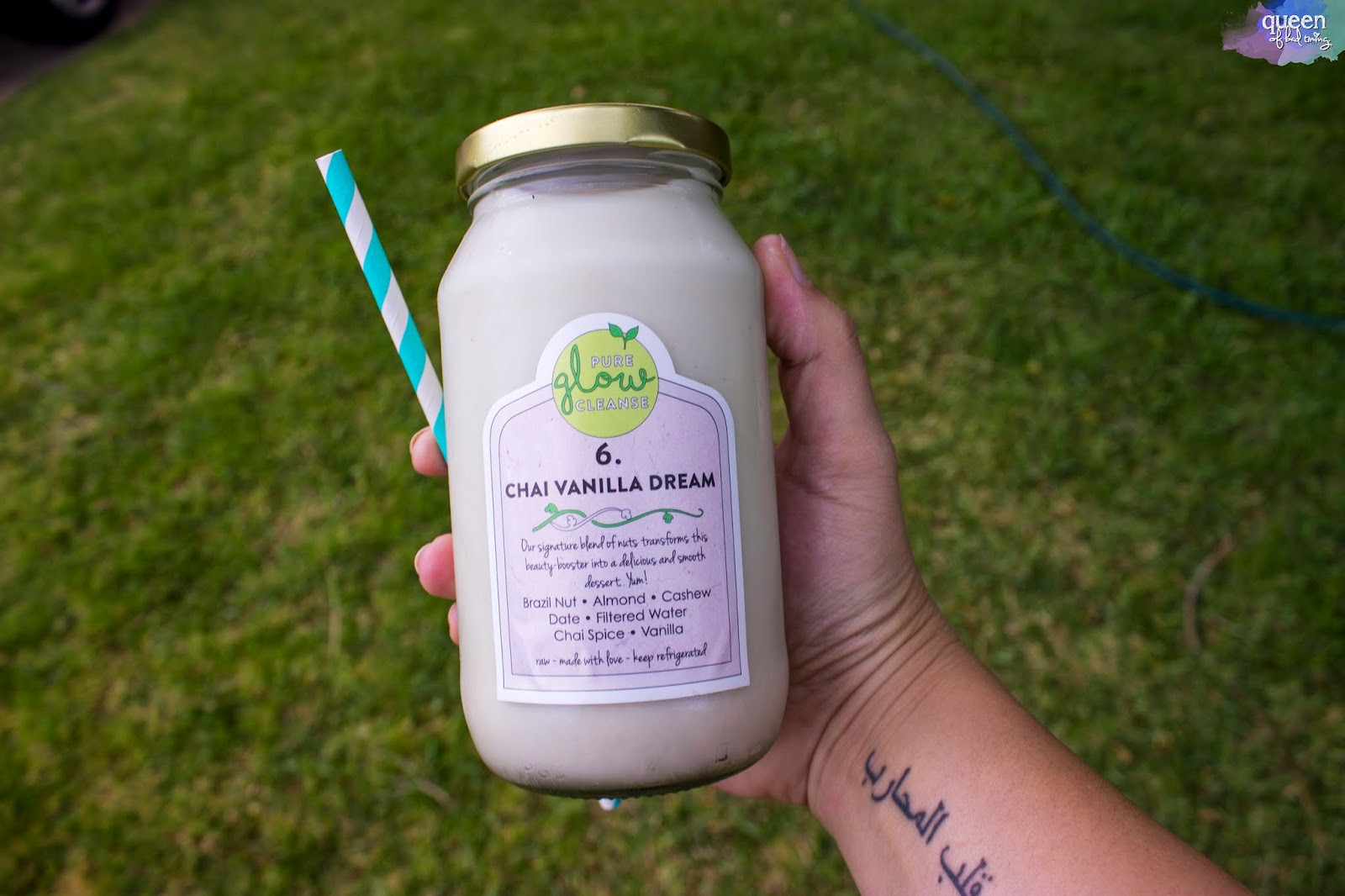 Now it might sound a little dramatic but I’m actually quite proud of myself for doing the full one day cleanse without cheating. One day isn’t a long time, but believe me I did have some doubts over whether my strength and commitment would hold out. And it did! I’m now really keen to try a three day cleanse next time because the days that followed my cleanse I noticed my skin was brighter, my system all restored and even my portion sizes for food reduced.

A big thank you to the team at Pure Glow Cleanse for inviting me to try their fab products and for popping my juice cleanse cherry. You may have started something of a common occurrence!

Getting up to no good at Troublemaker Burgers

A night of indulgence at Must Wine Bar