Eating my first meal of 2014 at South Ocean Chinese 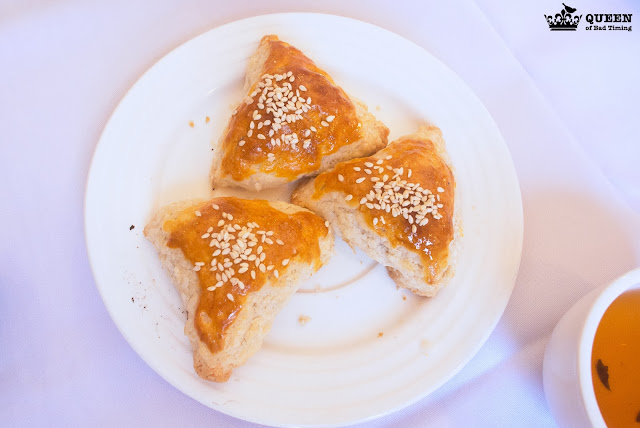 Happy new year readers! I hope you all had a great 2013, and your new year is off to a wonderful start already. Jeremy and I had fully intended to spend the first day of 2014 relaxing at home, chilling out in the backyard to soak up some sun. But after a couple of hours of that my mum invited us to go out to eat snow crab – and who were we to say to such an invitation!
Normally snow crab for us is a special occasion food item only; one we usually dine over at Hong Kong BBQ, our family’s go to restaurant. However they’re closed on Wednesdays so we instead went to a place south of the river that one of mum’s friends had recommended. I have to admit I wasn’t quite sure what to expect after reading a couple of the urbanspoon reviews but I’m always keen to try a new place out!

We arrive at South Ocean Chinese Restaurant around 1pm, and it’s pretty packed! There’s a couple of empty tables but it takes us about 5 minutes or so before we manage to get the attention of anyone working for us to be seated.

Once we do get our table though we look over the menu and make our mind up pretty quickly as jasmine tea is poured out for us all. Since we were set on having snow crab, we just needed to decide if we’d accompany it with dim sum or other larger dishes. We choose dim sum since it’s quick and we can eat away while waiting for the star of our meal. 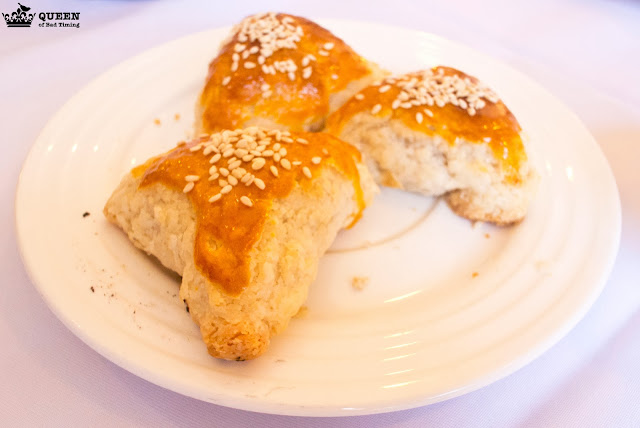 The first of the dishes to come out is barbeque pork in a crumbly pastry with sesame seeds on top. As far as dim sum dishes go, this is one I tend to love. Sweet, saucy char siu pork surrounded by a light savoury outside. It’s the kind of pastry that seems dry at first but is actually quite buttery and short. 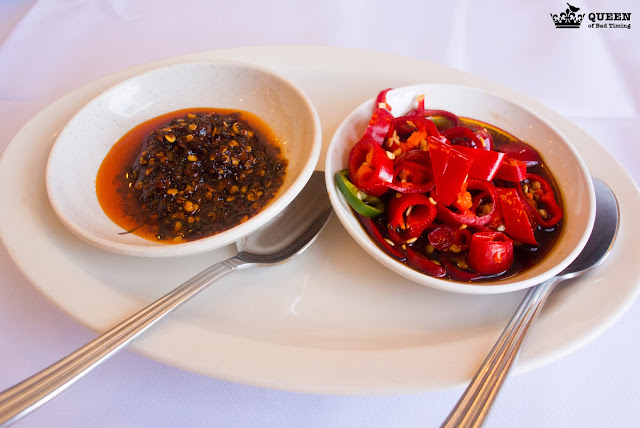 The last couple of places I’ve eaten this at haven’t hit the mark, but this one is pretty good. Cheap too – I think the dim sum dishes here are all around the $3-4 mark as opposed to the higher premiums paid in Northbridge. I like dipping it in the plentiful serving of chilli oil they bring out on request. 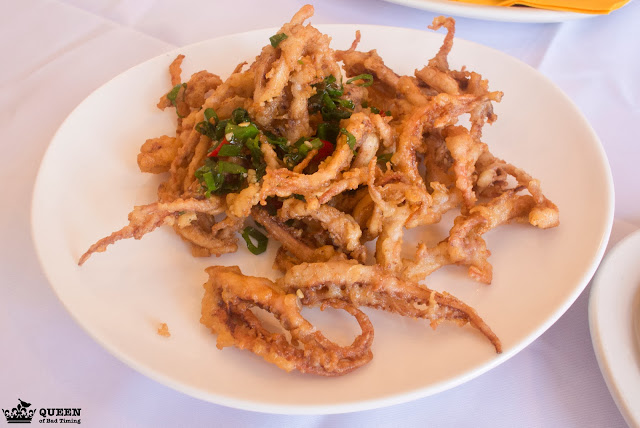 Next up we have the salt & chilli squid. The tentacles are fried to a golden brown and while they’re on the smaller side, I actually prefer these to the really chewy ones you can get elsewhere. These ones are crunchy, zingy from the garlic, chilli and salt flavouring though the serving size is not as generous as other places. I guess given the price tag you’d probably order a couple of plates to get a decent quantity. 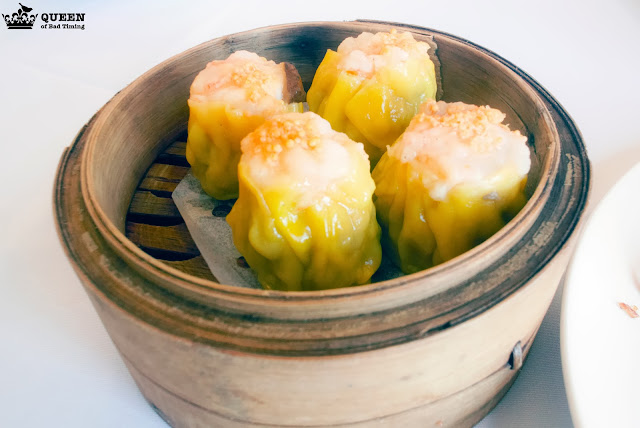 The sui mai is a little on the small side and dry for personal tastes, though the filling is relatively flavoursome. The roe on top has lost most of it’s colouring which I often find with pre-frozen dumplings that are steamed later. Not a bad dish, but definitely not the best siu mai I’ve had. 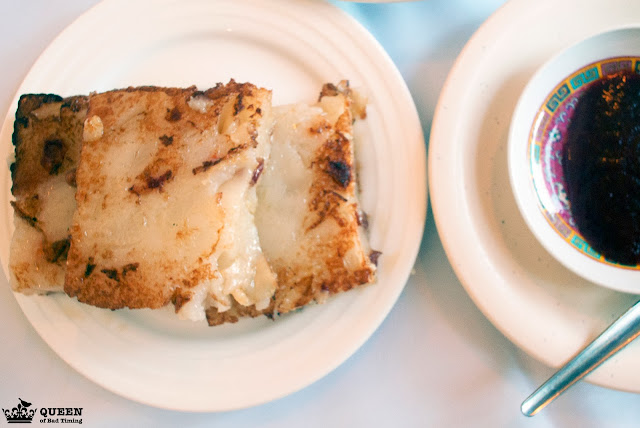 When it comes to radish cake, I can’t help but be quite judgemental since it’s a dish we often help my mother make every few months. It’s something I’ve grown up on and I have to say that no one tops hers. The radish is always fresh and soft, the fillings including mushrooms and shrimp. 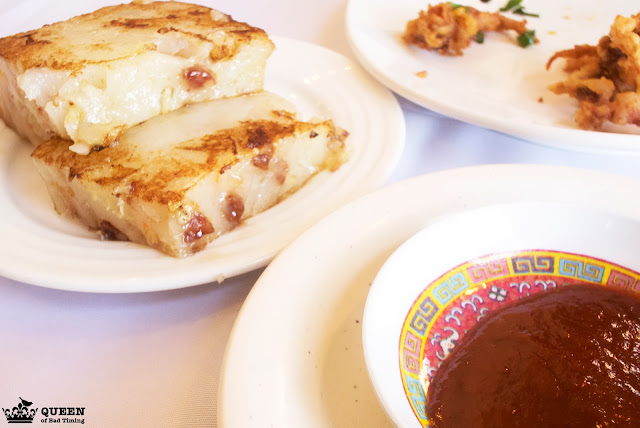 This one us a bit more generic and not quite like mum’s unfortunately. It is lovely and crisp on the outside, and slightly gelatinous inside. The dipping sauce on the side is a nice touch to give it an additional dimension of flavour. 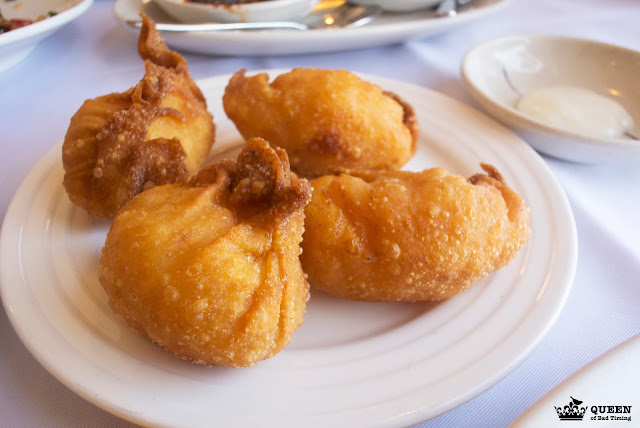 The final of our dim sum dishes is the fried prawn dumplings with mayonnaise. The outside layer is crisp and not as oily as I had suspected on first glance. The prawns inside are fresh and succulent, they’re quite juicy.

The mayonnaise serving is a little on the stingy side though so sadly I can’t completely immerse each bite like I usually do (though perhaps you’re not meant to be so generous like I am with sauce!). 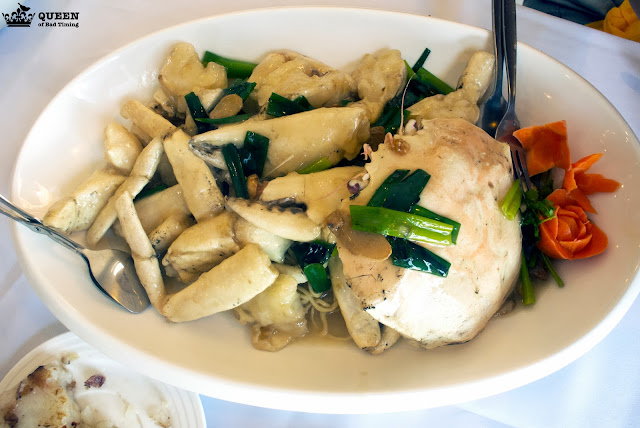 The snow crab comes out and it’s a good size serving for the three of us. It’s about 4 and a half pounds so costs just under $170. Expensive, yes. But worth it? Every now and then I think so!

We choose to have it cooked with ginger and shallots and accompanied by a serving of noodles. There’s a thick pool of gravy underneath from mixing stock with cornflour, and I’m pleased by the taste it’s well seasoned and oh so satisfying. 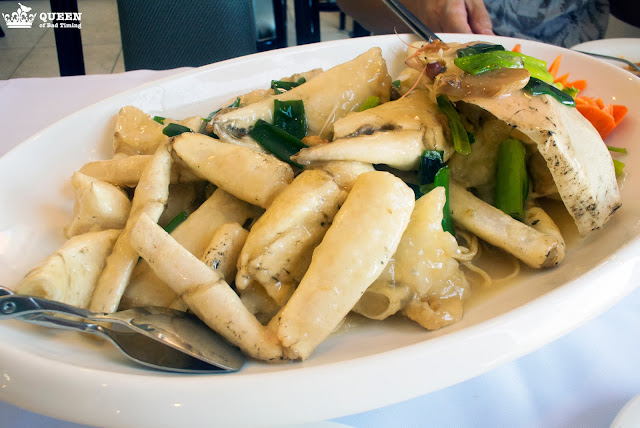 The crab is sweet and fresh – and it’s fun picking out all the meat from the shell. You can tell this is a relatively young crab, the shell is soft enough to crunch through with your teeth to get through to the flesh underneath if you choose to do that instead of using the supplied utensils.

I like that they bring the crab out to the table to show us before cooking – it allows you to see the size of the crab you’re getting and also proof that it’s nice and fresh. It shows when you’re eating it.

The only real downfall I have with this is that they’ve covered the shell with cornflour before frying the crab and it hasn’t become crunchy but rather gluggy. It weighs it down a little and sticks to your fingers – though doesn’t detract from the actual seafood itself.

We eat every last crumb on the plate, finishing with a sated sigh. It wasn’t a cheap lunch out coming to around $195, but it was a nice way to start our new year. Was it perfect? No. But the star of the show had been delicious and cheaper than most restaurants in Northbridge for fresh snow crab. Not so bad at all.

Hailing the menu at Ha-Lu

Falling in love at The Old Crow