Gaga over desserts at Gaya 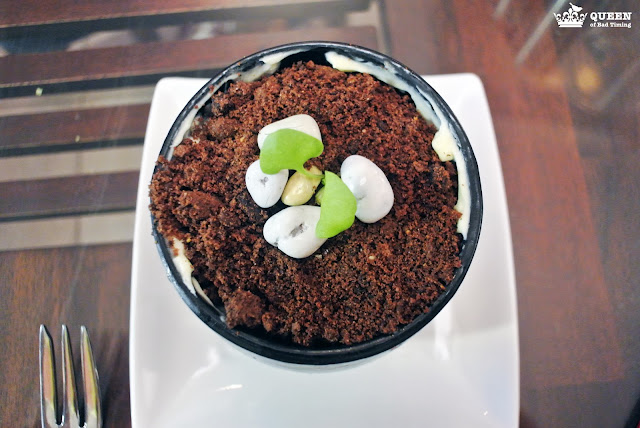 I love food. Yes that’s probably a bit of an obvious statement given how much I dine out, indulge in cooking at home and talk/write about eating. But I am by no means an expert, especially in certain cuisines that I don’t have a great deal of exposure to.

Korean is one of those fares. I love Korean barbeque – especially the thin, sweet sliced meats you can buy at Melville Korean butchers. But outside of a couple dishes, I’m pretty much clueless. So you can imagine my surprise and delight when I was extended a really lovely offer for me to come to Gaya, a Korean fusion restaurant in Applecross to try their menu out. Naturally I said yes! 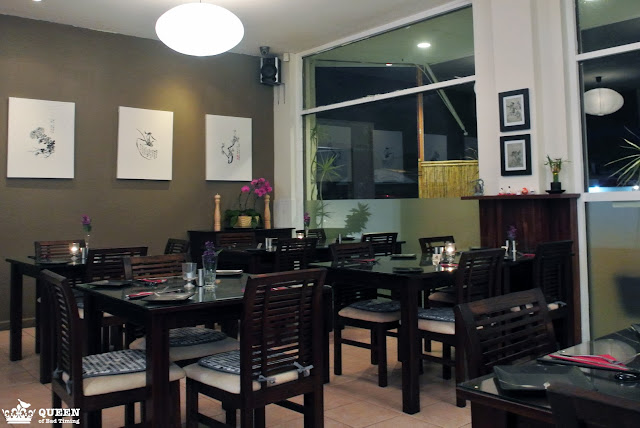 Jeremy and I arrived at 6.30pm and the restaurant is quiet, with just one other table frequented. It seems our booking had been misplaced, but our waitress was lovely and took it in her stride. It was actually kind of nice being there without them realising I was a food blogger – I waited until after we’d eaten to introduce myself to the Head Chef, Leo. He was lovely and extremely apologetic that they’d forgotten I was coming in, but I didn’t mind at all, it was a nice invitation to this place.

The location of Gaya is hidden away in Applecross, which I think is a little shame as unless you know to look for it, you wouldn’t know it’s there. The decor is simplistic but serene, I like the tables and the little zen looking garden in the corner. It’s cute and the service is quick and efficient. We’re brought cold water which has a little note of lemon in the taste straight away, plus our menus and a complimentary appetiser. 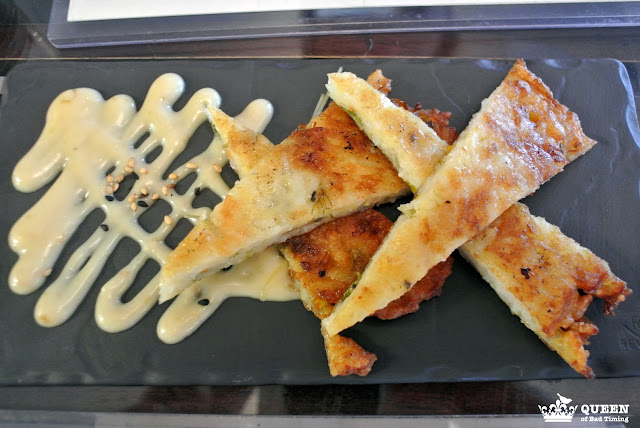 The appetiser is a Vegetable Jijimi, which is a Korean traditional style pancake made from flour and has chives, onion and carrots. It’s slightly gelatinous, with a a nice crispy edge on the more golden sections. I like the crisp parts more than the thicker pieces, but all up it’s really delicious.

It’s served with a chilli mayonnaise according to the menu but it tastes more like a sweetened mayo, and it suits the pancake really well. All up, it’s a great start to our meal at Gaya, and a nice touch in that it’s a complimentary started given to all diners. 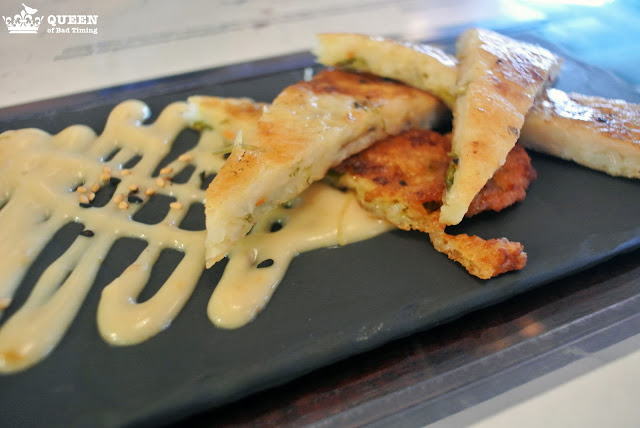 As we’re picking at our appetiser, Jeremy and I place our orders for our entrees and mains. The entrees come out quickly, and smell amazing.

I think it’s at this point I should really point out how great the service is – the wait staff were constantly attentive, friendly and asked for our feedback on the food. I enjoyed the way they managed us without ever being too present. My boy’s ordered the Fish Jijimi ($12) which is a Korean style fish fillet pancake with soy mayonnaise on the side. I really love how soft the fish is in this dish, it’s slightly flaky and fresh, the fish working well with that delicious soy mayo, it compliments the delicateness of the seafood.
Though we’d each ordered dishes, naturally we shared so I dug into this dish quite happily! There’s not much batter on this so it was more like fish fillets than pancake, but I actually think I preferred it this way. 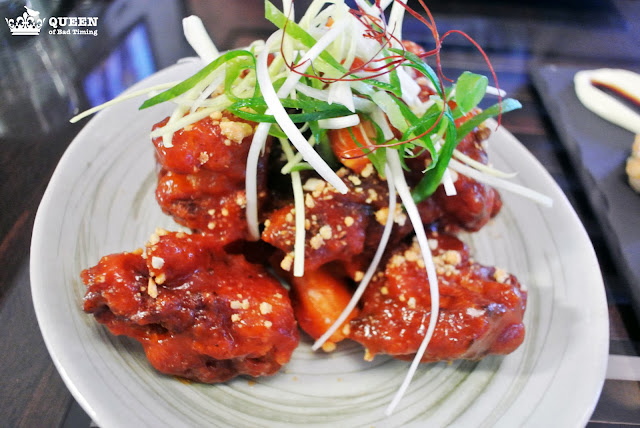 For my entree choice, I pick the Gaya Chicken ($14). It’s nuggets of deep fried chicken thigh in a Korean style batter, topped with a sweet and spicy sauce, plus peanuts.

Fried chicken is the best kind of chicken if we’re being honest! This one doesn’t disappoint at all. Tender, juicy chicken and a lovely sugary sauce. There’s no spiciness as the menu description suggests, but I don’t mind because I find it fingerlickin good! And since I love peanuts, that’s just an added bonus. 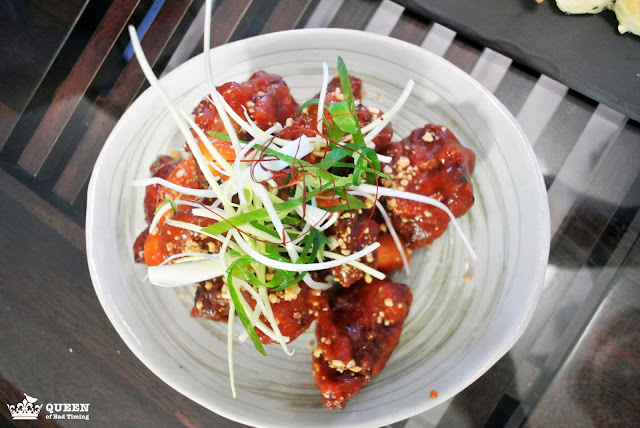 Once we finish our entrees, our plates are cleared and we’re presented with a complimentary Korean style palate cleanser.

It’s made up of a spicy tomato wedge, cold potato strips and pickled cabbage (I think that’s what our waiter said for the last one). I remark to Jeremy at this time that I’m loving these added courses in between our dining!

The tomato is my least favourite of the bunch. It has a bang of a spicy kick to it, but the tomato is a little rubbery. The cabbage is vinegary and sour, it definitely clears your palate as intended – Jeremy really enjoys these. The one I like the most is the potato – little cold strings of cooked potato that is starchy and sweet, it is yummy! 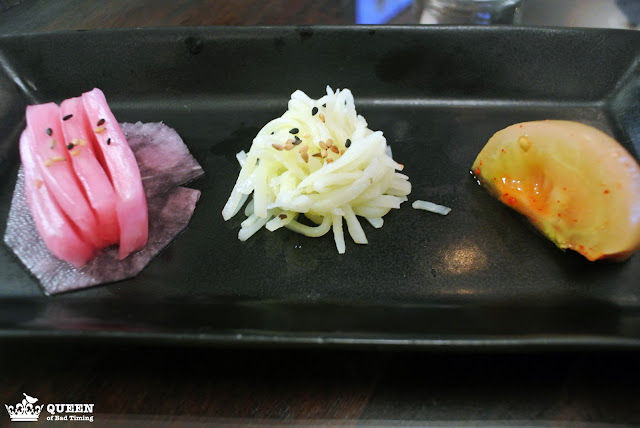 As with the entrees, our mains come up quite quickly and here’s where we really start to see the fusion side of this Korean cooking.

Jeremy’s ordered the Tteokgalbi ($30). It’s Korean royal court cuisine grilled beef spare rib patties with deep fried rice cakes and yoghurt potato salad. There’s an egg on top which Jeremy is asked by our waiter how he’d like it cooked. He chooses sunny side up and when it comes out, that vivid orange yolk is just screaming to be pierced! 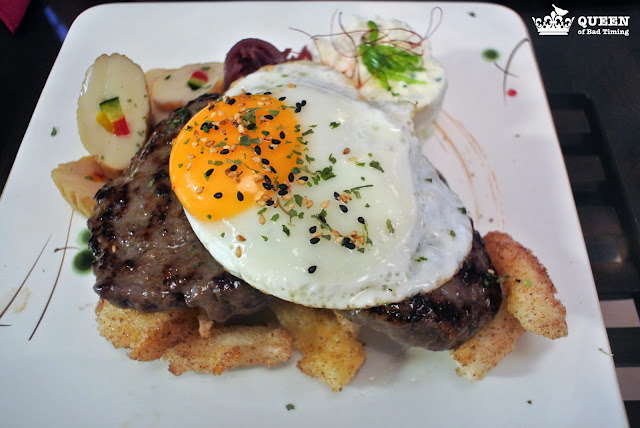 The beef has a really sweet but moorish flavour. It’s slightly sticky and though it looks like a hamburger patty, the meat is quite tender and delicious. I love the cinnamon dusted fried rice cakes underneath which are crunchy but ever so slightly glutinous at the same time.

It’s interesting having that cinnamon flavour so dominant, but I think it works really well with the meat and other ingredients, especially when the yolk of the egg starts spilling out and acting as a sauce. 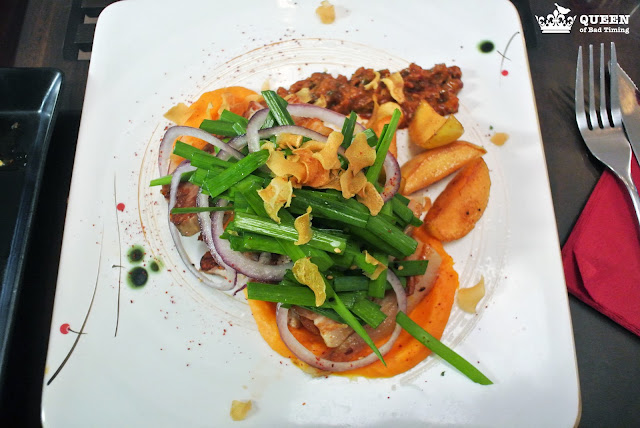 Simply titled, 36 Pork ($30), my main is one of the more fusion western influenced dishes on the menu. It’s made up of 36 hour sous vide pork belly with sweet potato puree, Korean chives salad, glazed apple and a soybean paste sauce.

Firstly, I think it’s great that Gaya are presenting a pork belly dish that bucks the over popular trend of crisp crackling. While I do love a good crackling, there’s something quite decadent and enticing about a soft, gelatinous pork belly. It’s not something everyone loves, I have close friends who are food lovers but just can’t bring themselves to gorge on fat… but I find a great deal of comfort in the flavour when done right.

And this one is. 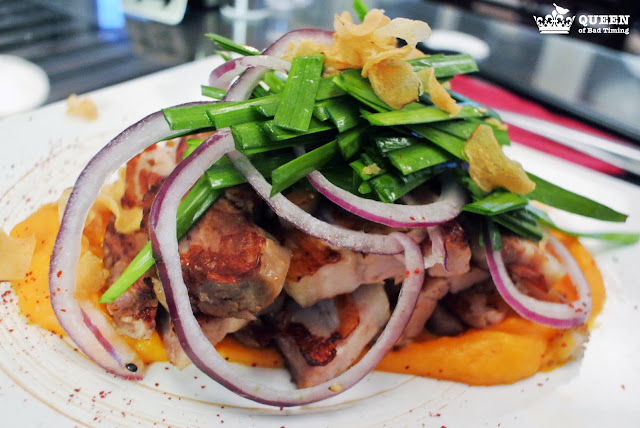 Soft, fatty sections of pork that can be cut into as though the meat is butter, it all melts in my mouth. The sweet potato puree is lusciously smooth, complimenting the pork perfectly. While it’s a strange combination having the soybean paste sauce in the mix, I actually quite enjoy it – it’s the only really dominant Korean flavour on the plate and offers a good point of difference. It’s a little salty on it’s own but with the other ingredients it’s a great pairing.

The glazed apples are crunchy and while this in itself is not a negative, I would have liked them to be softer as though to represent apple sauce. The chive salad is plentiful, and while I was a little sceptical to start with, I actually really enjoyed this aspect – it was fresh, fragrant and looks good on the plate. 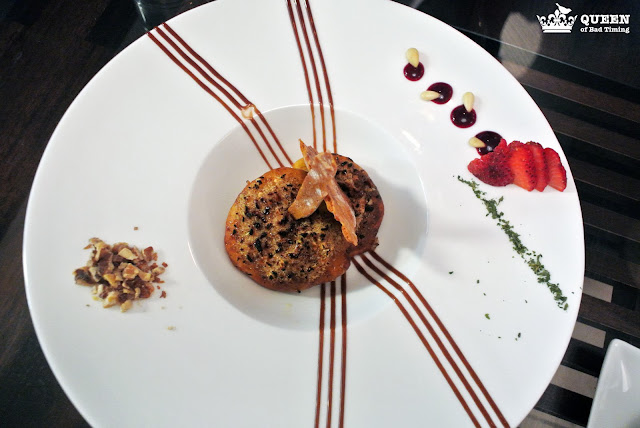 Though we’re both pretty full after our entrees, mains and complimentary courses, we’re both quite keen to try the desserts. As with our entrees, we decide to pick a dish each and share. 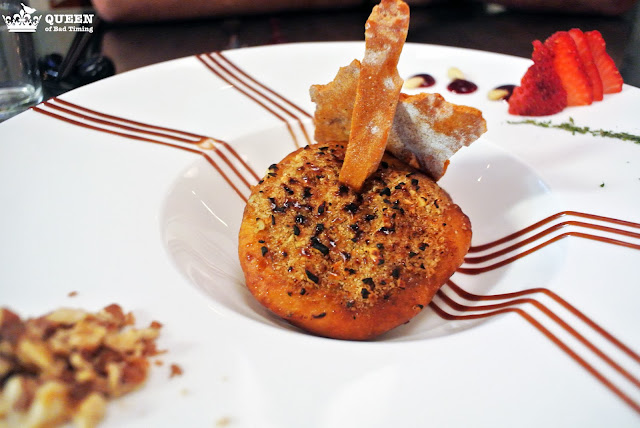 I immediately go for the Gaya Ho-Tuck ($8) as my choice, which is a pan fried dessert that has a rice flour crisp outer layer, and a sugary filling inside. There’s some honeycomb shards balanced on top, caramel lines striping the bowl and crushed nuts and strawberry slices. The ho-tuck serving itself is small but I think for $8 it’s definitely a reasonable price.
I absolutely adored this dish, and would return again for it. It was a real treat and from what I’ve heard, it’s a traditional Korean street fare. Very yummy! 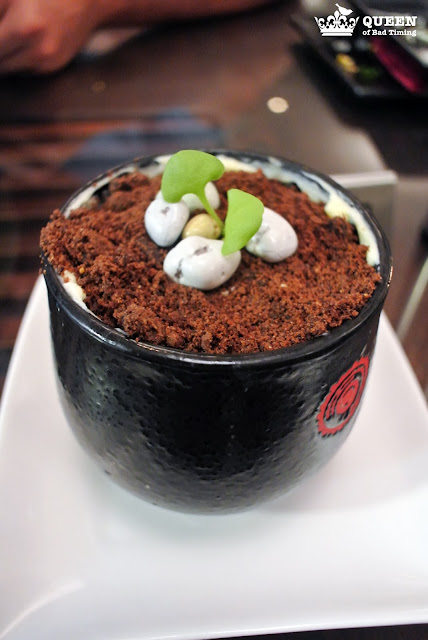 To my delight, Jeremy chooses the Red Misu ($8) which is Gaya’s take on a tiramisu. Doesn’t it look as pretty as a picture!

It’s a tiramisu dessert but with red beans mixed into the layers – the dish presented like a little garden with chocolate ‘rocks’ and a little microherb plant. It reminds us both of Jeremy’s potted dessert at No 4 Blake Street.

I am not by any means a coffee drinker or delighter. Usually I shy away from this flavour but I have to say, I really was amazed by this dessert. The coffee flavouring in the spongey layers is evident but not dominant, and there’s a nice level of sweetness without being cloying.

I love the crunchy chocolate ‘dirt’ and the ‘rocks’ – they give a level of fun and innocence to a well executed dessert. The red beans inside bring that Korean fusion side of things into the dish, and since I adore my red bean desserts, the addition of these into a traditional Italian dessert is a great touch.

Gaya was a great night out for Jeremy and I, and the staff and Leo were wonderful hosts. While our meal was complimentary, I stand by everything I’ve said in this post. I just hope more people find their way to it since it’s so tucked away and hidden!

Getting to the Greek with Yefsi at Attika

A naan feast at Himalayan Nepalese