Healthy food for the soul at May Street Larder 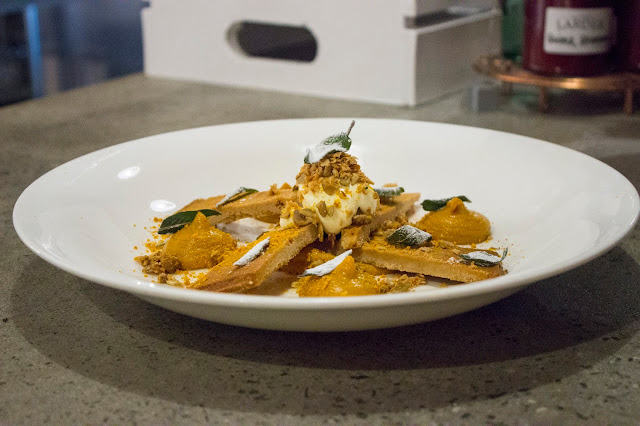 The term soul food became popular in America in the 60s, representing both Southerness and commensality. Dishes like hush puppies and fried chicken, collared greens and corn grits, they have a soulful, comforting quality. It’s a cuisine style that hasn’t really fully transitioned over to Perth, though there are some restaurants who display some examples such as The Old Crow. 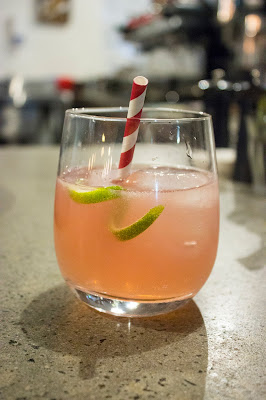 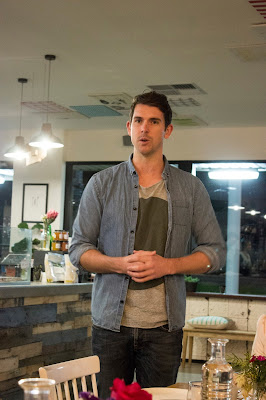 Recently May Street Larder started dinner service, with their first menu being all about Soul Food. While it doesn’t quite delve into the depths of African and Moors influence, owner Eamon Sullivan and Head Chef Scott Bridger have crafted a series of dishes that playfully nod to those roots while utilising Australian produce. Having really enjoyed my breakfast at their restaurant, I was excited to receive an invitation by Zara Bryson from Peach and Pineapple to an intimate preview of their dinner menu with fellow foodies. 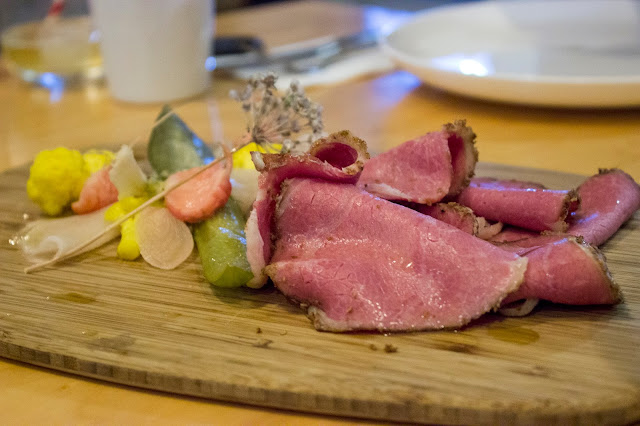 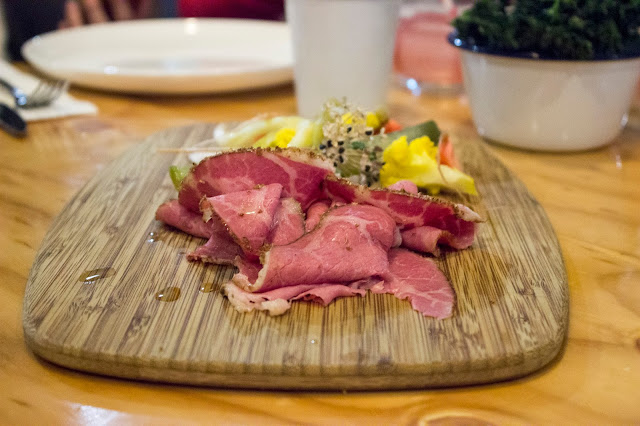 Moonshine cocktail in hand, and great company all around the table, we sat and enjoyed dish after dish from their menu which should available for the next 3 months before the next cuisine is rolled out.

The first dish to come out is the smoked wagyu pastrami with house pickles ($12.00). I really enjoyed this as an appetite whetter, with the soft, flavoursome beef melting in my mouth. The range of pickled vegetables was varied and offered different flavours and piquancies. 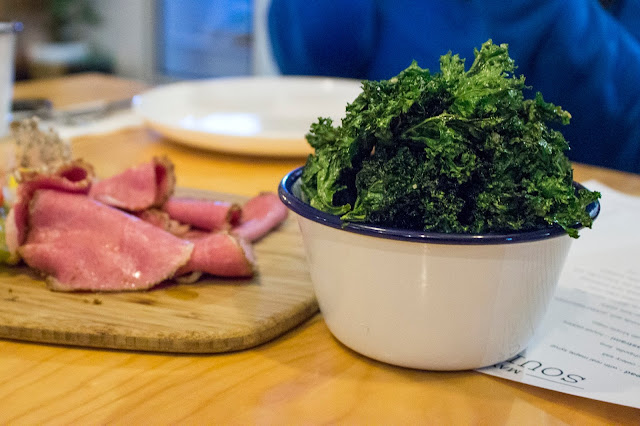 The roasted kale chips with celery salt ($5.00) were not far behind the first dish and were completely and utterly addictive. Crunchy and slightly crumbly, these were made even more tasty from the flavoured salt. I think for the size of this snack, they were a great serving size and something that everyone really enjoyed. 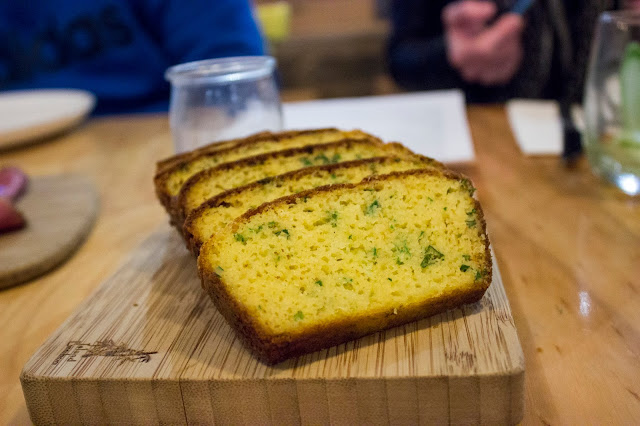 I knew I would love the jalapeño corn bread with real maple syrup ($7.00) before it even hit our table. I just adore all things corn, and this definitely did not disappoint. The jalapeño chilli hit was mild but still present; the texture of the bread soft in the centre and crisp on the outside. Having maple syrup to soak into the slices made it sweeter and slightly decadent. 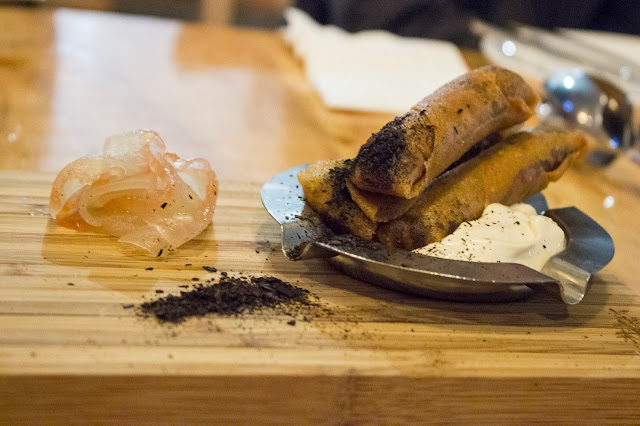 The pulled beef brisket cigars with buttermilk aioli and pickled watermelon rind ($12.00) presented themselves as a bit of a quirky looking dish in cigarette trays with leek ash sprinkled on top. I can see what they’re trying to do here, but I actually hate anything to do with cigarettes and smoking (unless it’s smoked meat – right!), so I would have preferred something a little more simpler in the presentation department.
That said, these cigars were so tasty and one of the best dishes of the night! The crisp, shatteringly thin pastry encased rich beef that went well with the creamy aioli and that tart watermelon rind. I would happily purchase a jar of that rind, it was my favourite ingredient out of everything we tried – somehow sweet and sour at the same time. It was delicious! 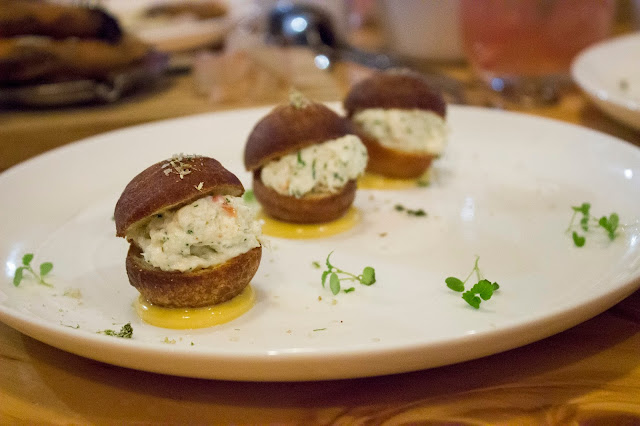 The Rottnest lobster doughnuts with lobster aioli and celery ($14.00) were an extremely popular bite and I have to admit, they really showcased the beautiful produce. The doughnut was almost like a brioche bun, with the generous serving of lobster stuffed to the brim inside. I was pretty happy to score more than one of these! 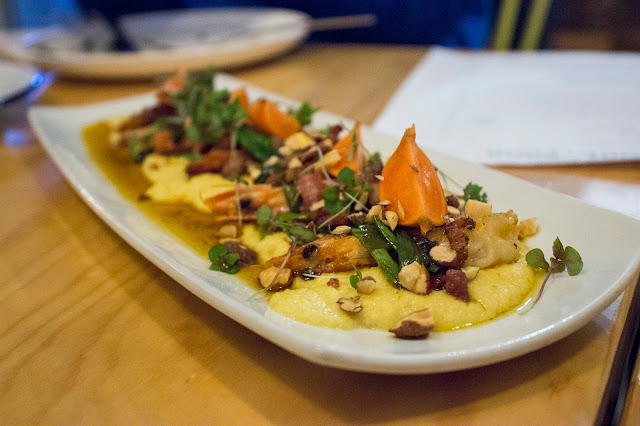 The shrimp and grits ($16.00) with smoked almonds, pickled radish and shiso was a creative twist on one of the most famous soul food dishes around. Forgoing the standard ground corn grits, Chef Scott Bridger uses lupins, which is a grain grown in WA that are high in protein, dietary fiber and antioxidants, low in starch, and are gluten-free.
What I particularly like about lupins is that they fill you up so much, leaving you full for a long time after. I can definitely attest to this dish prompting me well along the way!
I thought this dish had lovely flavour, and the prawns were cooked perfectly. The combination of pancetta and almonds offered crunch and saltiness. I do think this dish lost a little of the essence of it’s namesake, but having a healthy alternative (i.e. not completely loaded up with butter!) is in line with May Street Larder’s offering and branding so I think its a suitable dish to serve there. 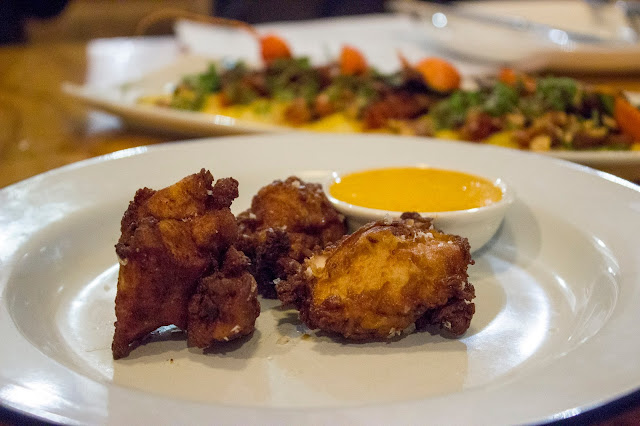 When we all saw the menu item of fried buttermilk chicken with kimchi mayonnaise (4 pieces for $9.00) there was a bit of a chorus of celebration. I mean who doesn’t love fried chicken! Zara joked with us that she had to bully Scott into adding it to our tasting menu for the evening, and I think we were all pretty pleased she did!

The chicken was succulent and juicy, plus perfectly seasoned! I thought the real star though was that mayonnaise which had the loveliest flavour making for an addictive condiment I kept going back for again and again. 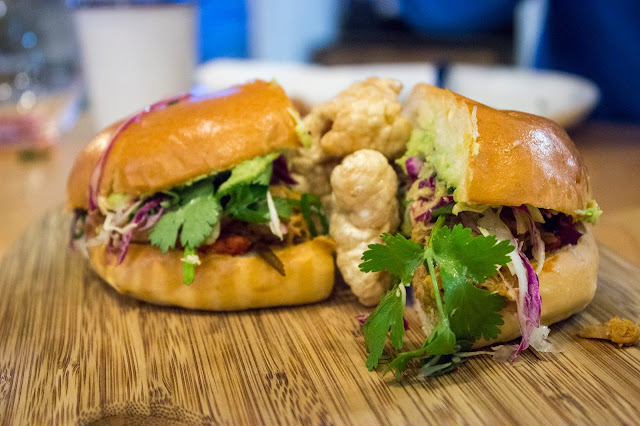 Around this stage I was definitely getting full but there were still so many dishes to munch away on! The Sloppy Jose with pulled pork, chorizo, avocado, cabbage and pork scratchings ($19.00) was declared a favourite by many around the table but I was a bit unsure – I liked the flavours, and those pork scratchings were addictive but I thought the pulled pork could have used more kick from spices. Just a personal preference as we make pulled pork at home and love it full of heat and flavour. 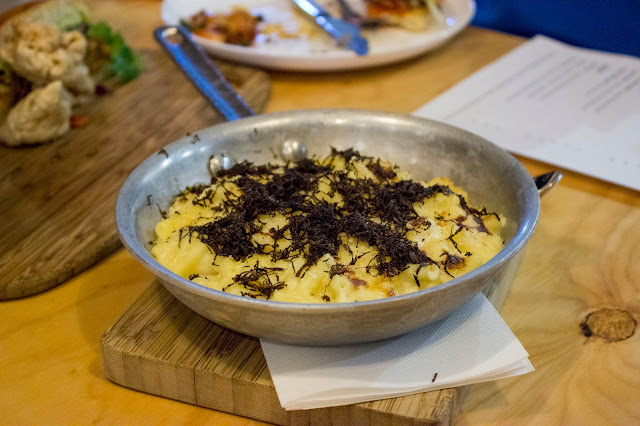 I knew before I even tasted it that the truffled mac and cheese ($17.00) would be a winner. I love this time of year with those beautiful black truffles in abundance, and they are the perfect accompaniment to the decadent and creamy mac and cheese.
We might all have been declaring that we couldn’t eat a bite… but mysteriously somehow, some way all of this was gobbled up – every last bit! 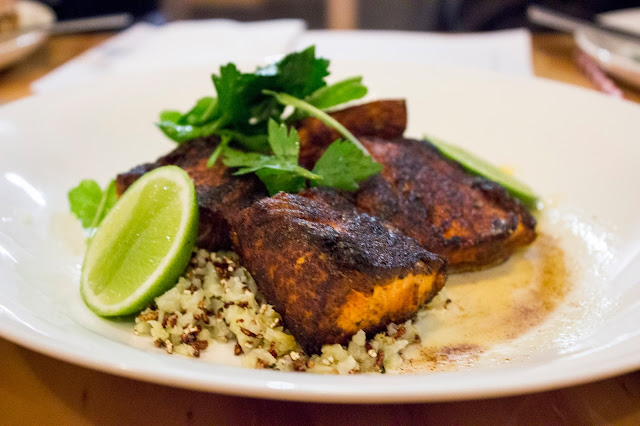 The blackened ocean trout with cauliflower rice, puffed red rice, brown butter and lime ($21.00) was a healthy but tasty dish – with the trout just flaking away with the simple prod of our forks. The real star on the plate was the cauliflower rice which was al dente and peppered with the crunchy red rice. 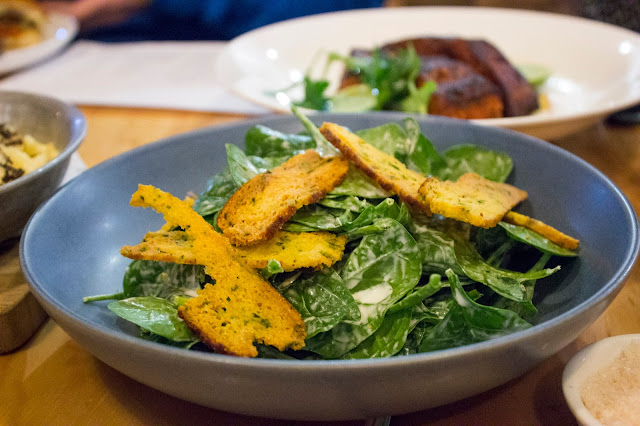 A typically American dish of ranch salad with spinach, ranch dressing and cornbread croutons ($9.00) was a standout for me in its simplicity and effective execution. I thought the salad leaves were well dressed, and I loved the reappearance of that cornbread from earlier which was crunchy and addictive. 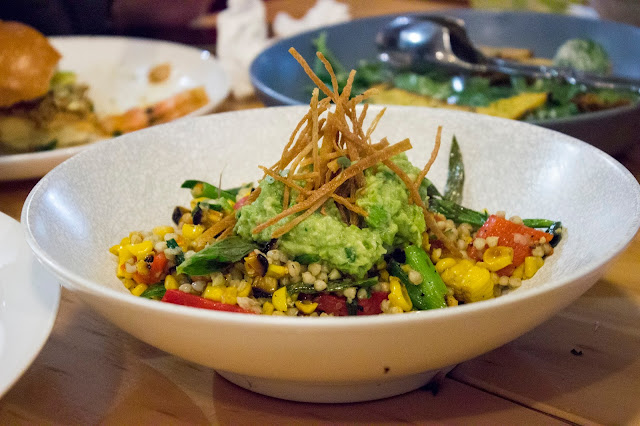 I was looking forward to trying the succotash with sweetcorn, buckwheat, green pea guacamole and mint ($16.00) but when I realised there was capsicum throughout I decided to limit my taste seeing as my stomach can’t process that vegetable. However what I did quite like was that pea guacamole – yes, it seems the guacamole controversy of the NY Times has hit Perth, and I’m agreeing with it! Again, I thought this was a nice healthy spin on a classic. 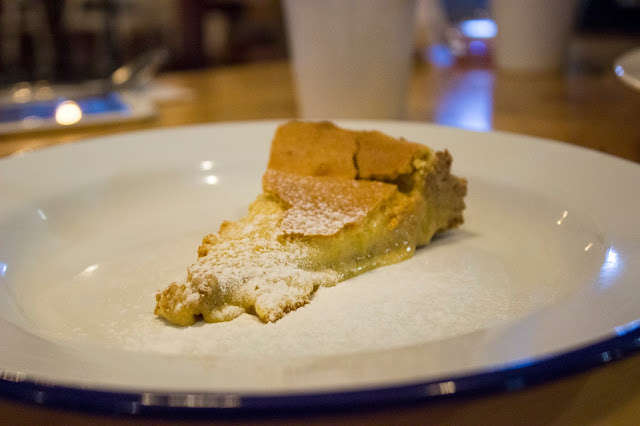 When it came time for dessert we were treated to two different dishes, starting with the crack pie with oatmeal crust and vanilla custard ($15.00). This is my third time trying crack pie, with my first at Subi Farmers Markets by Eat Meets West and the second at the Flour Factory. It’s a dish that was made famous by David Chang’s Momofuku, and one that guarantees to provide you with a sugar rush that continues for hours!
May Street Larder’s version is made with four sugars and is fantastic – layered levels of sweetness interspersed with crunch from the pastry. Some people might find it a bit too sweet, but for me, it was on the money and my favourite of the two desserts we tried. 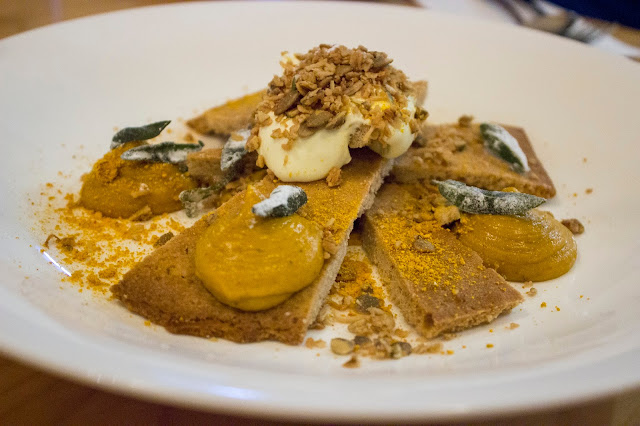 Our final dish for the night was the pumpkin pie with cinnamon sable, pepita granola and dulce de luce ($14.00). A modern, deconstructed version of another American classic, this had contrasting textures and flavours. It was a more savoury offering than our first dish, but I enjoyed it, especially the little touches like the sprinkling of pumpkin seeds and the crisp sage leaves which go so well with this vegetable.
What a fantastic way to finish our epic meal at May Street Larder! From start to finish it was a pleasure and a night full of tasty treats. While I don’t think their soul food menu is traditional, I think it’s delicious nonetheless and something that suits their style of cooking and the ingredients they showcase. I’m looking forward to heading back soon and trying some of the other dishes we didn’t get to try that night!

A night of romance at the Subi Hotel

Visiting the lunchtime canteen at Bivouac

Focusing on the goodness inside me 💕 I’ve be

Pho-get about everything else, this is all I need

When the obsession is mutual 🥺

Never underestimate the power of a good sandwich.

It’s not easy being green but dayummm it’s tas

Ughhh this bread - it’s worth a trip to @manukaw

Surround yourself with amazing people and life fee