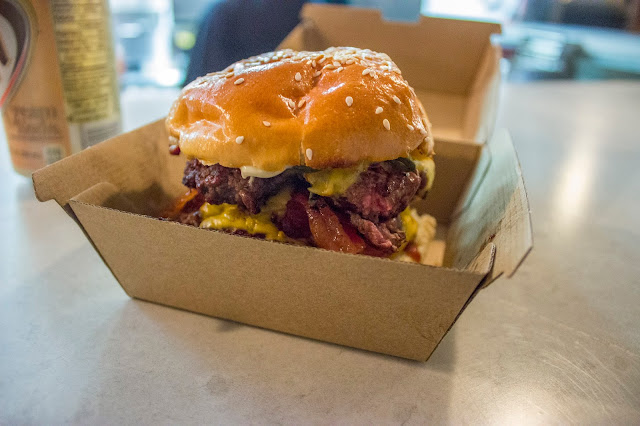 Hella good? Hella yes. I’ve had my eye on Short Order Burger Co since it first popped up at The Mantle in Freo every Friday and Saturday night for dinner. Burgers are big business here in Perth, and people go gaga over a good handmade patty, melty cheese and a squishy bun. Well at least, I know I do.

The only problem with living north of the river is trips down to Fremantle aren’t as common as I’d like, and I have a ridiculously long list of venues I’m dying to eat at there. I kept trying to find time to go to Short Order, but interruptions, plans and all other kinds of roadblocks kept coming my way. But eventually I got there. And now I hate to say it since it’s not exactly close by, I have a benchmark now for what a great burger in our city should be like. 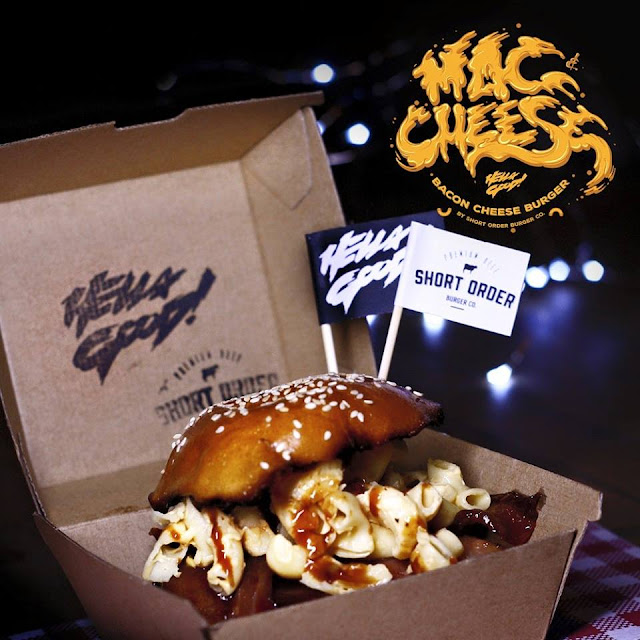 Artwork by Peche, photo by Shu Daniels
It was the picture above that spurred my need even more than normal to get down to Short Order. I love seeing people I know do amazing things, and when I saw talented Perth duo Dipesh and his girl Shu have an upcoming exhibition called Hella Good (for which they designed a logo for use by Short Order for their own Hella Good product) I felt a stronger compulsion than ever. Burgers themselves are a beacon calling my name, but a 4th of July special laden with mac’n’cheese, well consider me sold.
I took my eating partner in crime and general partner in life Jeremy down for the ride. Arriving at The Mantle around 7pm there were no tables left but we managed to snag a couple of stools at the counter overlooking the kitchen, which is actually my preference – I got a little bit of lighting that way so you can actually see the magnificence of what we’re eating. 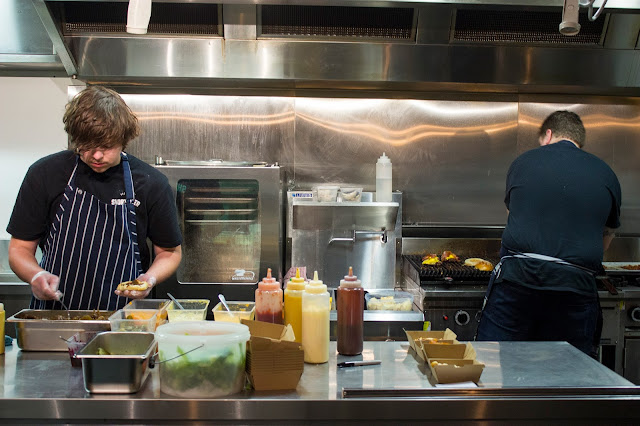 First things first – the staff here are awesome. Friendly, relaxed and you can tell they’re really passionate about what they’re doing. They have a nice limited menu which I prefer because that way you feel like they’re doing a few things right. And they also have donuts from the Banker which is great for a little sweet ending after you load your arteries up with the heart stopping stuff. 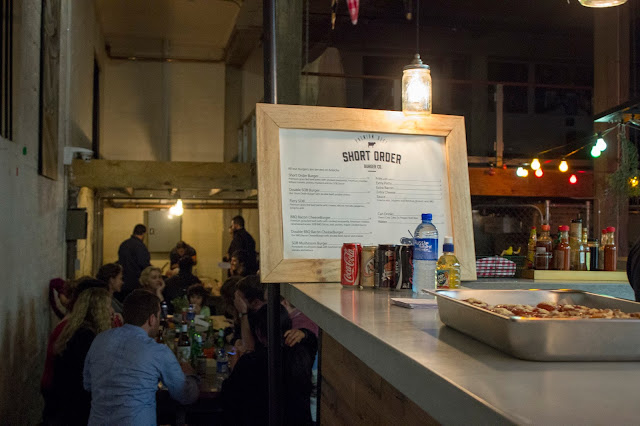 Selecting our burgers I know immediately I want to try their ‘Hella Good’ mac’n’cheese on a bacon cheeseburger (I want to say this was around $16.00 – I can’t remember, I was too excited by the sound of the food and the aromas wafting from the kitchen).

Jeremy selects the bacon barbecue double cheeseburger (I think this was maybe $19.00?) which I can imagine would be one of their more popular options. Piled high on pillowy soft toasted buns were two hand formed beef patties, crisp bacon, melted cheese and crunchy pickle. There’s so much to love about this, and I thought this was the best burger I’ve ever tasted. For real. 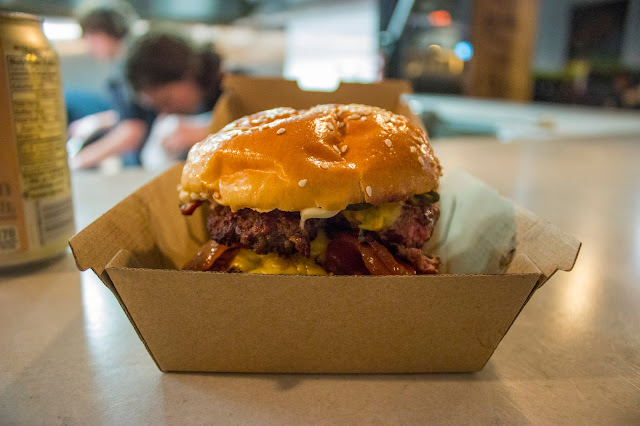 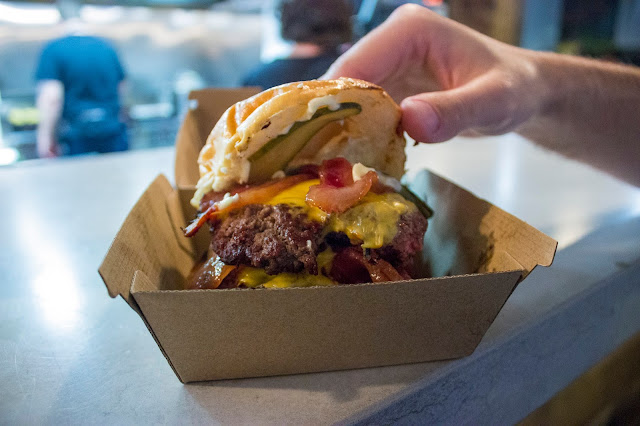 My ‘Hella Good’ burger was oozing out the macaroni which was stacked in between bacon and a beef patty. Carbs on carbs? So much goodness I can’t even begin. I thought it was playful, morish and an extra cheese injection never can go wrong.

For me, there’s three things about Short Order’s burgers that have left me feeling like a return trip stat: 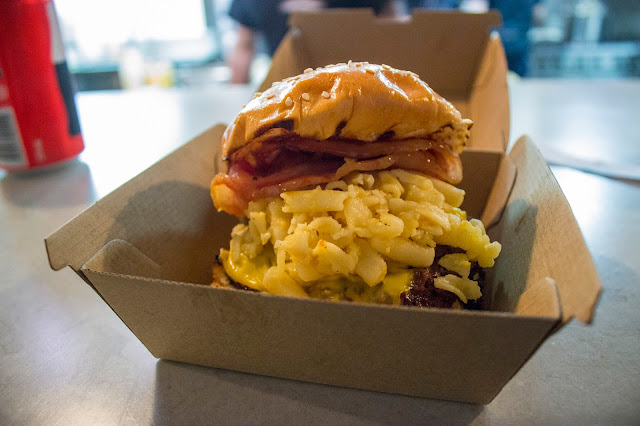 And because you can’t order burgers and forget the fries, we got an order of their shoestring fries with sriracha mayonnaise ($6.00). Literally every fry in here was crisp and well seasoned. I love when chips are salted so ferociously that your lips tingle a little – it’s just what they’re meant to be like, and makes them even more addictive as you munch away.
The sriracha mayo is awesome – a good kick of chilli flavour that isn’t watered down like some chilli mayo combinations. I know Jeremy loves it in particular, he’s happy to scoop up big globs of it as we destroy the pile of fries before us. 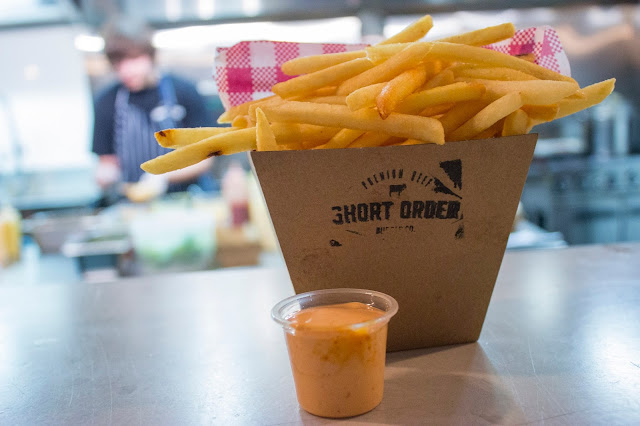 There’s not really much more I need to say about Short Order Burger Co. In fact it feels weird to write a blog post that gushes so much, but I have to say I was really impressed. This is the kind of burger I love, and it ticked all the boxes for me. I can see why so many people are in love with this pop-up, why it sells out each weekend and why everyone I know who has been is raving.

PS I went back the following Friday with my girlfriend Linda. Still amazing. Even busier. Ahhh I am so addicted to this place.

July • another year done and dusted ✌🏼

Business lunch for one ☝️🥳

Well this was a bit stunning. Seeded loaf, salmon

How can one bowl of beans make me so sublimely hap

Find yourself a group of girls who cook you brunch

Guys this is Sancocho aka a truly delicious Colomb

Is this one of Perth’s best burgers? Oui!

What is it about stracciatella that makes me go we

Possibly one of the most delightful dishes I’ve

The ultimate grazing board featuring some of @garu