Hiding from the rains at Oakover Grounds, Swan Valley 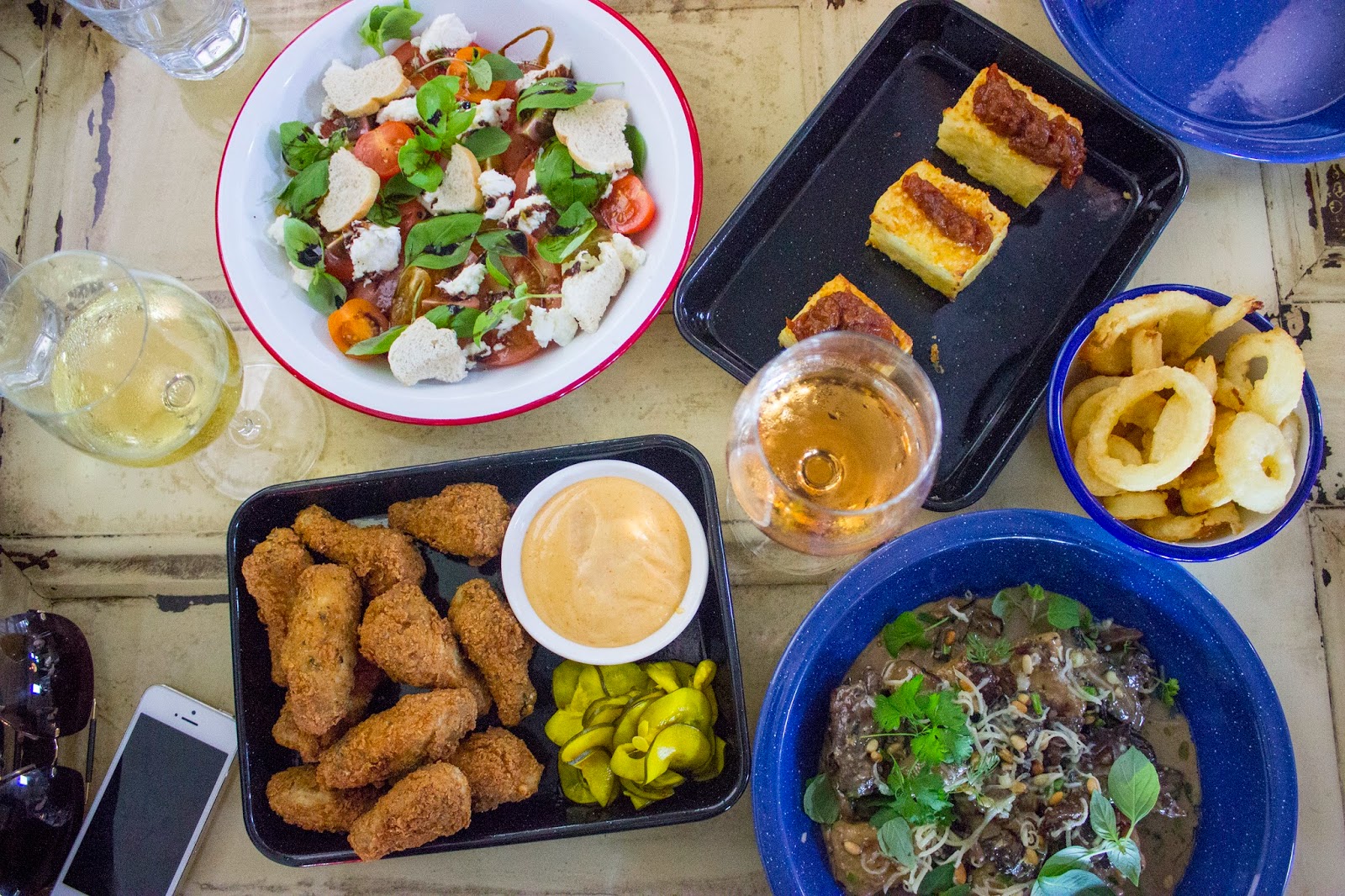 Weekends come and go so quickly sometimes that I often find myself scheduling multiple plans in a day, which means I like to stay relatively central to cut down the commute time. Every now and then (somewhat on the rare side though sadly) I manage to get some time to go out to Swan Valley and visit one of the beautiful little spots that area is populated with.

Recently I was invited to visit Oakover Grounds for lunch which seemed quite timely as I was thinking a lot that I needed to head inland for some valley goodness. I invited one of my closest friends Linda to come with me so we could catch up over a drink and some food since they were kind enough to extend the offer to myself plus a dining companion.

I think I literally picked the worst weekend in April to go to Oakover though – something I realised as I was driving in through what I can only describe as torrential rain. Even with my trusty golf umbrella shading me as I ran from the parking lot to inside, I was pretty soggy much to my despair. I usually like to hibernate in rainy weather!
When I arrived I noticed that Oakover is quite a lovely setting, with the real star attraction being the relaxing view over greenery and a lake. Once the rain finally subsided I could see why spending a leisurely lunch outside would be so appealing. But while we were confined indoors, we were lucky enough to be seated by the heater so we could warm up. 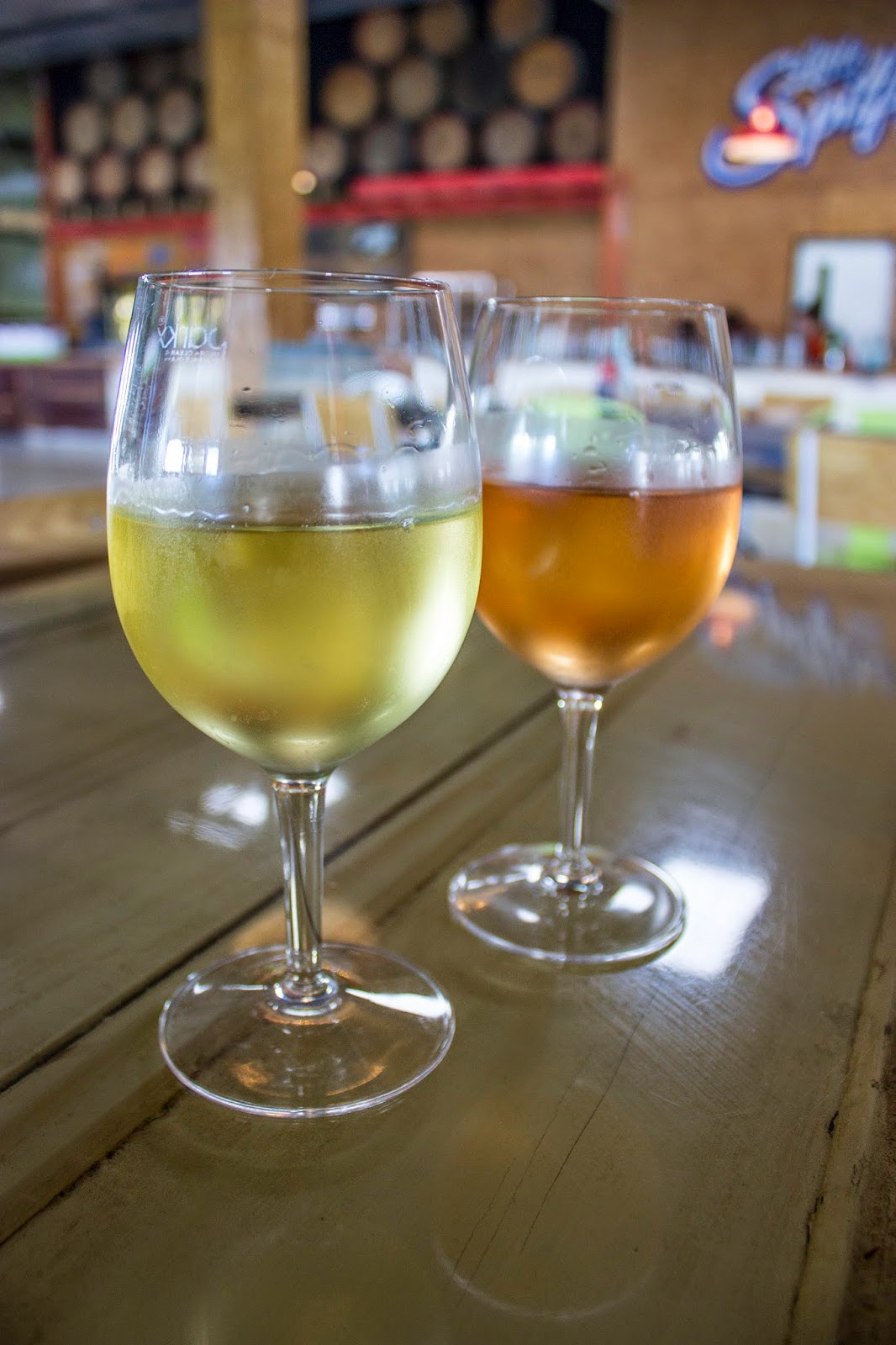 We start things off by ordering a couple glasses of wine upon recommendation of our waitress. The 2011 verdelho ($8.00) and chenin blanc ($8.00). Both are crisp but very sweet – I think for me I’ve been focussing on reds so much lately that my palate has changed for wine taste. But once we had some food the drinks went down much easier.

Looking over the food menu there’s a decent number of dishes to choose from. Everyone around us seems to be ordering burgers and chips, which I have to admit is quite tempting in such weather. But to get the full experience of Oakover we decide to pick an array of dishes to share between us. 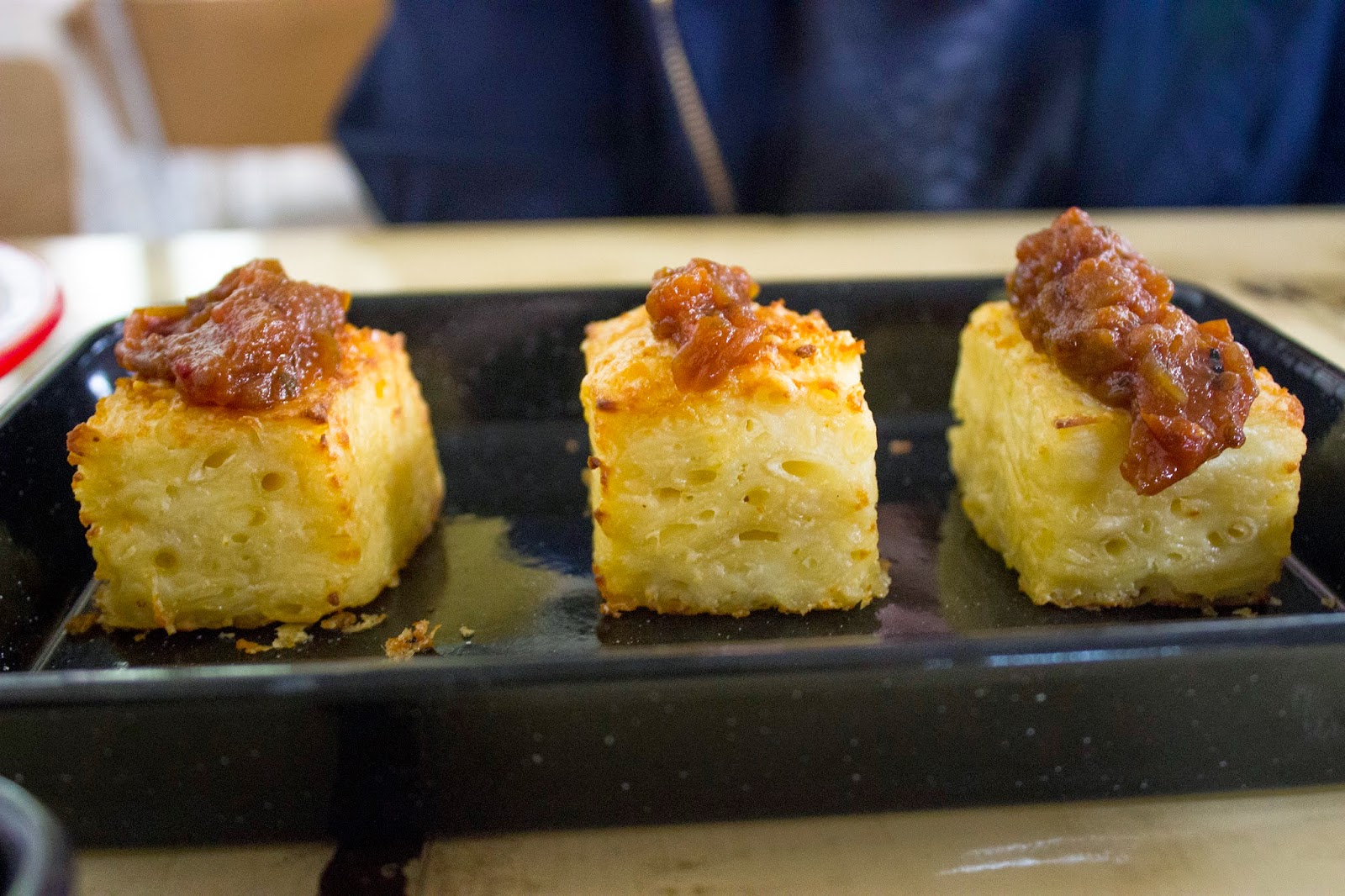 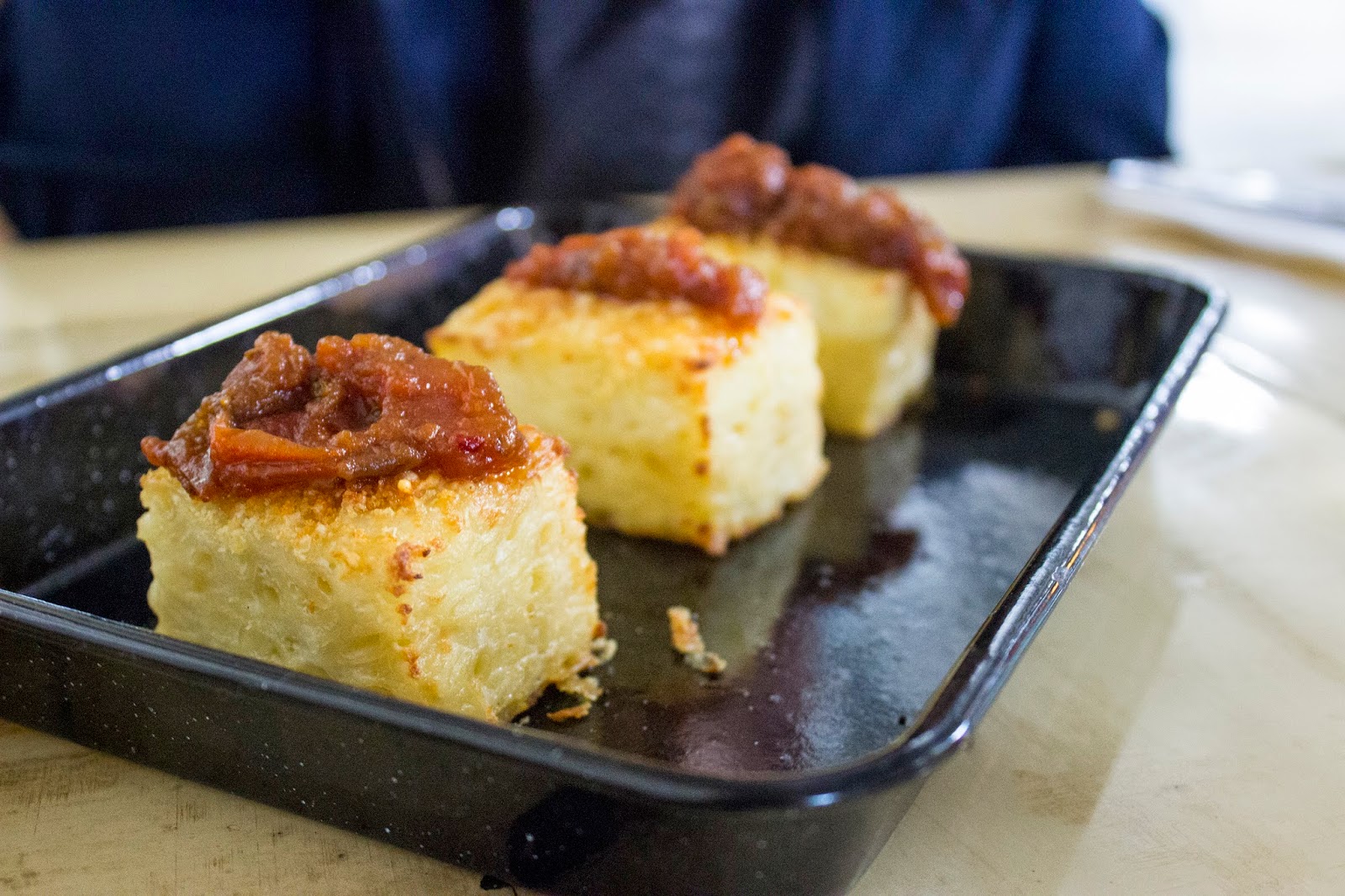 After a bit of a lengthy wait (I think we arrived with the lunch rush) of about 30-40 minutes, our food all comes out at once. We immediately jump onto the mac and cheese bites with tomato relish ($10.00). There’s three fragrant cubes sitting in a tray, their edges golden and crisp. I have to admit I was expecting something that would look more like what Ace Pizza or Merrywell have with their fried mac and cheese, but it was nice to have something different and more traditional.
I found these well seasoned but a little lacking in their cheesiness. The texture is more on the al dente side which I think is important to achieve the required structure. I definitely recommend eating these while they’re hot as once they cool the cubes set a bit too firmly. 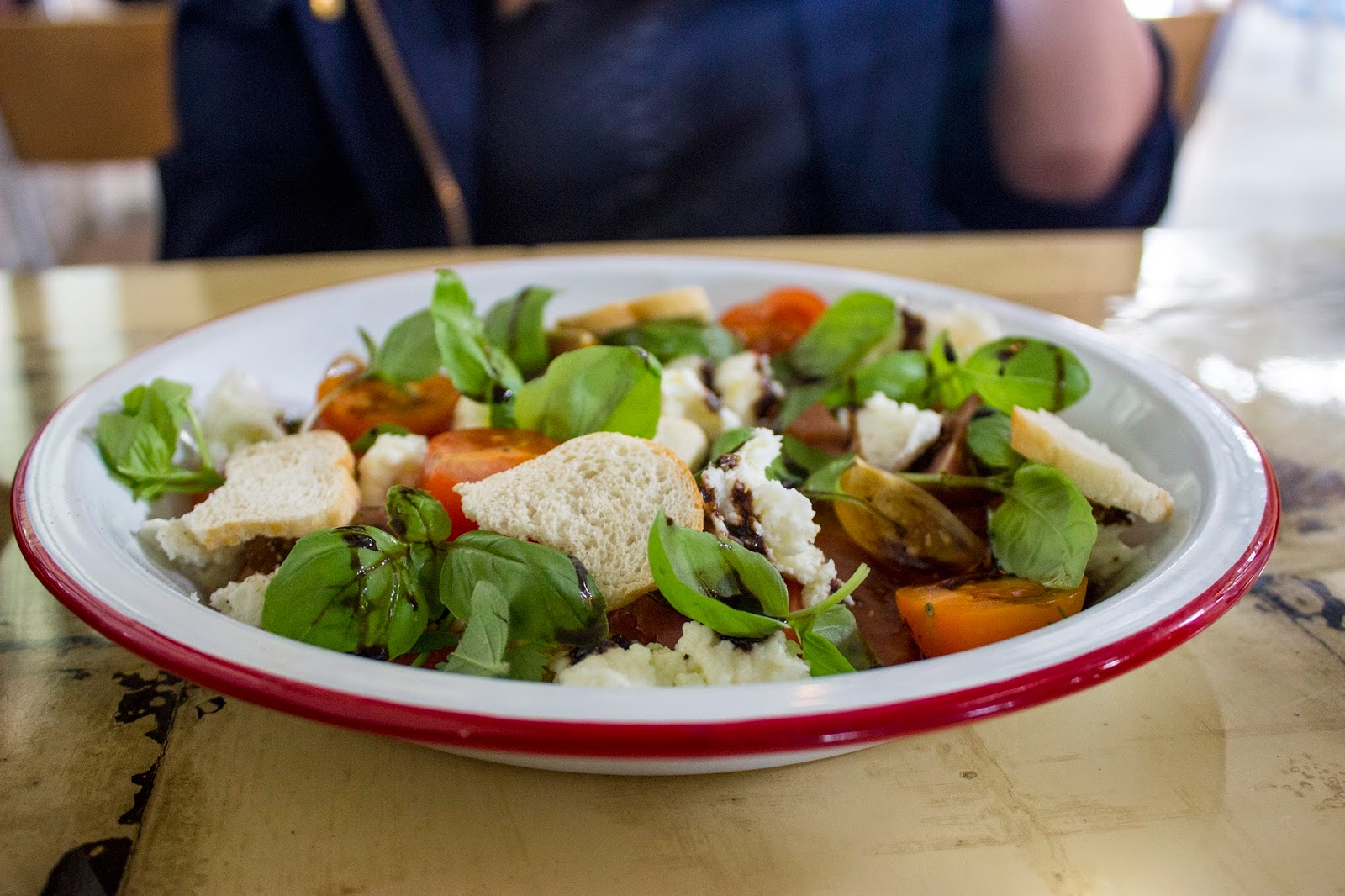 Since we’ve ordered a couple fried dishes we decide to be somewhat healthy and select a tomato, mozzarella, basil and bread salad with balsamic (I think this was around $21.00). I love a good tomato and mozzarella salad – it’s something we make quite often at home and is definitely best with a good scattering of sea salt, pepper and olive oil.

Oakover’s version is fresh thanks to the smattering of basil and the creamy cheese which is the star of the dish. The bread is a little too crisp and I think would have been better as some garlicky toasted croutons, and the tomatoes while juicy are a little softer than I personally find. I’m a person who definitely sides in the firm fruit and veg camp. In the end we did find this dish under-seasoned so we cleaned out the cheese as the priority. 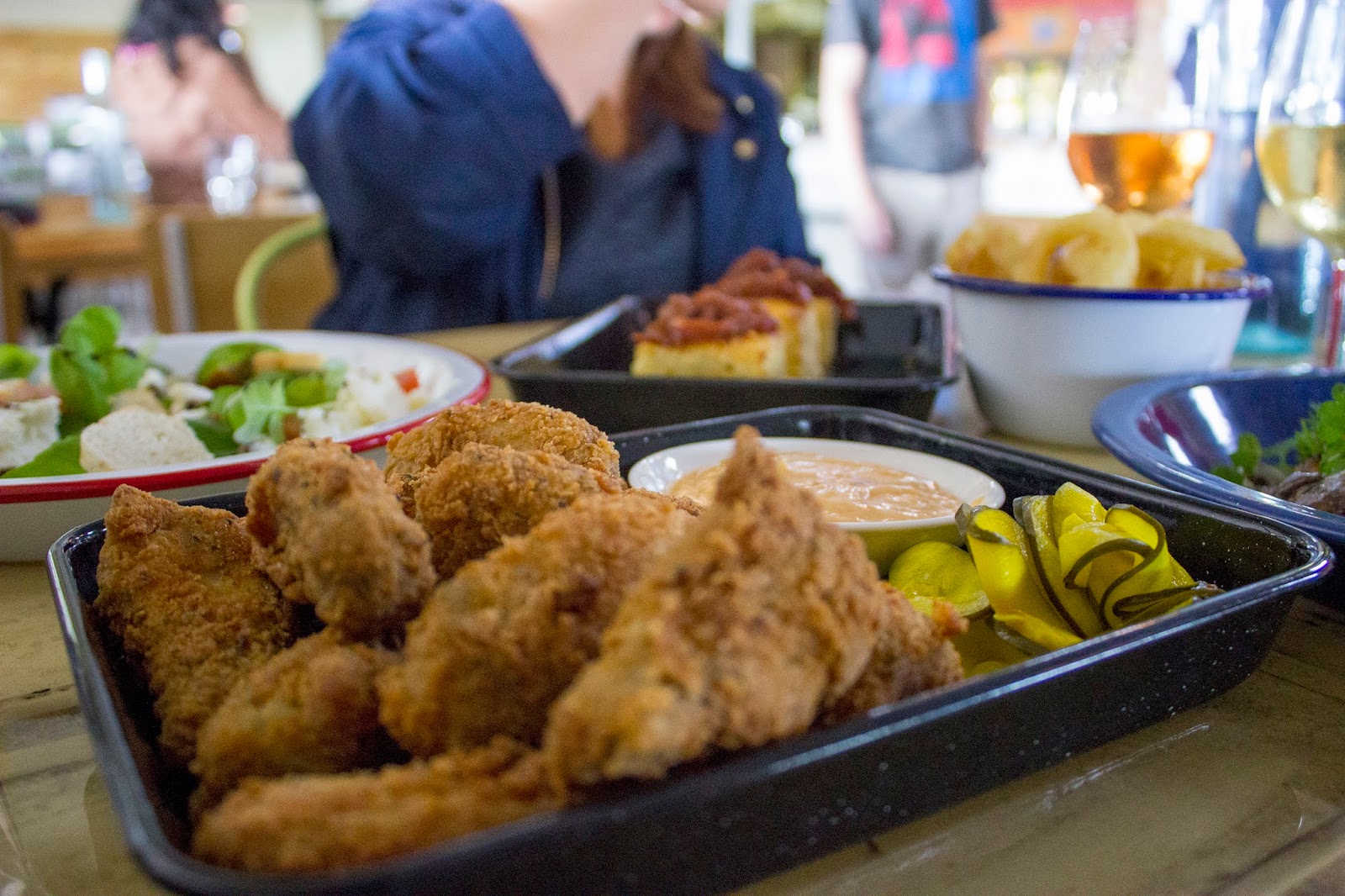 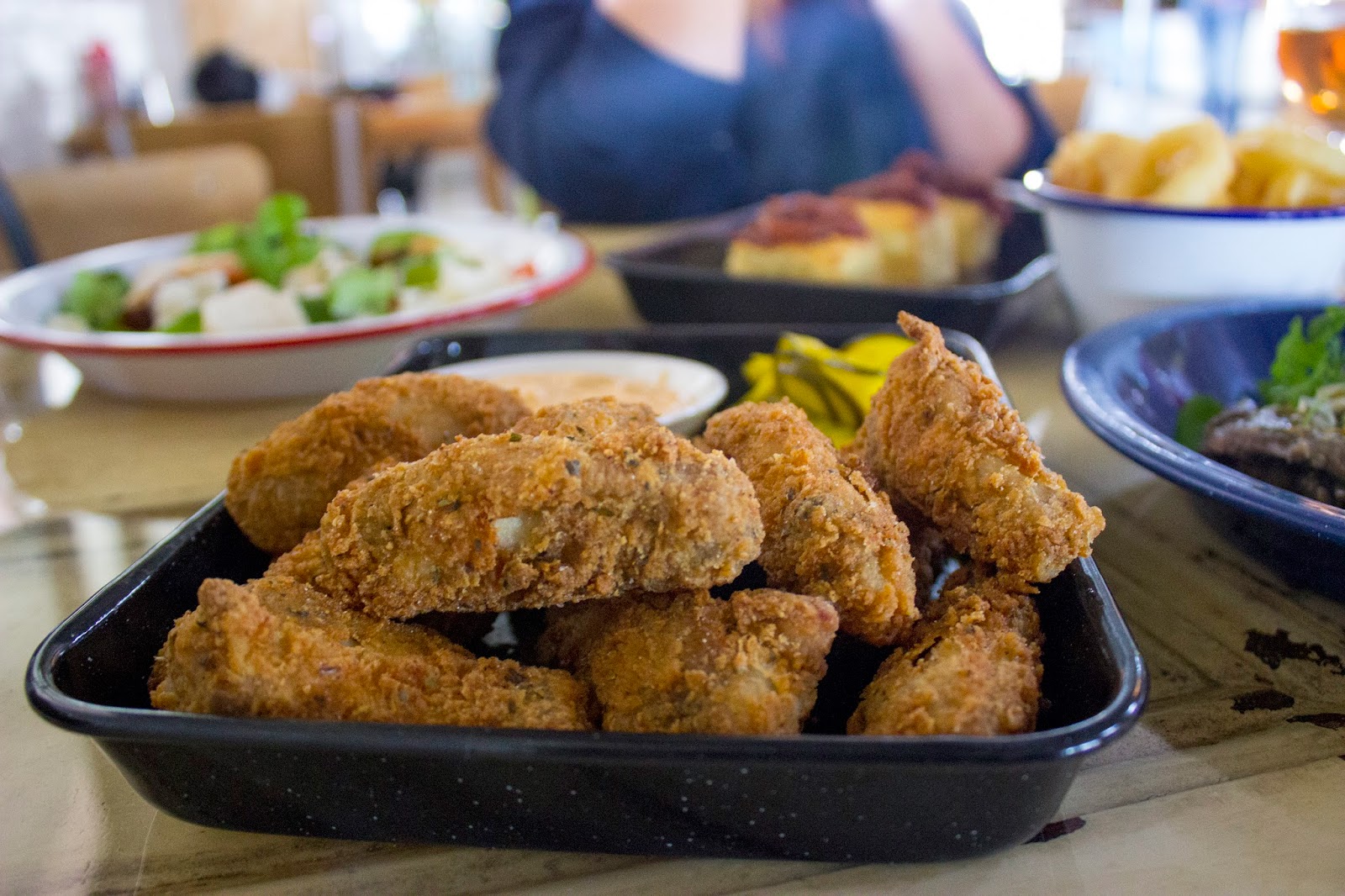 Our favourite dish of the day is easily the fried chicken wings with spicy mayo and house pickles ($10.00). First of all, how generous is that serving for the price! The wings are steaming hot, the coating on the outside crunchy and full of spices and seasoning. It’s so yummy, and definitely moorish. I find myself coming back for more and more even when I’m full to the brim. Very satisfying!

And the spicy mayo is a treat – the perfect accompaniment to these southern style wings. I can imagine these would be the ideal share plate if you came here for drinks with friends. 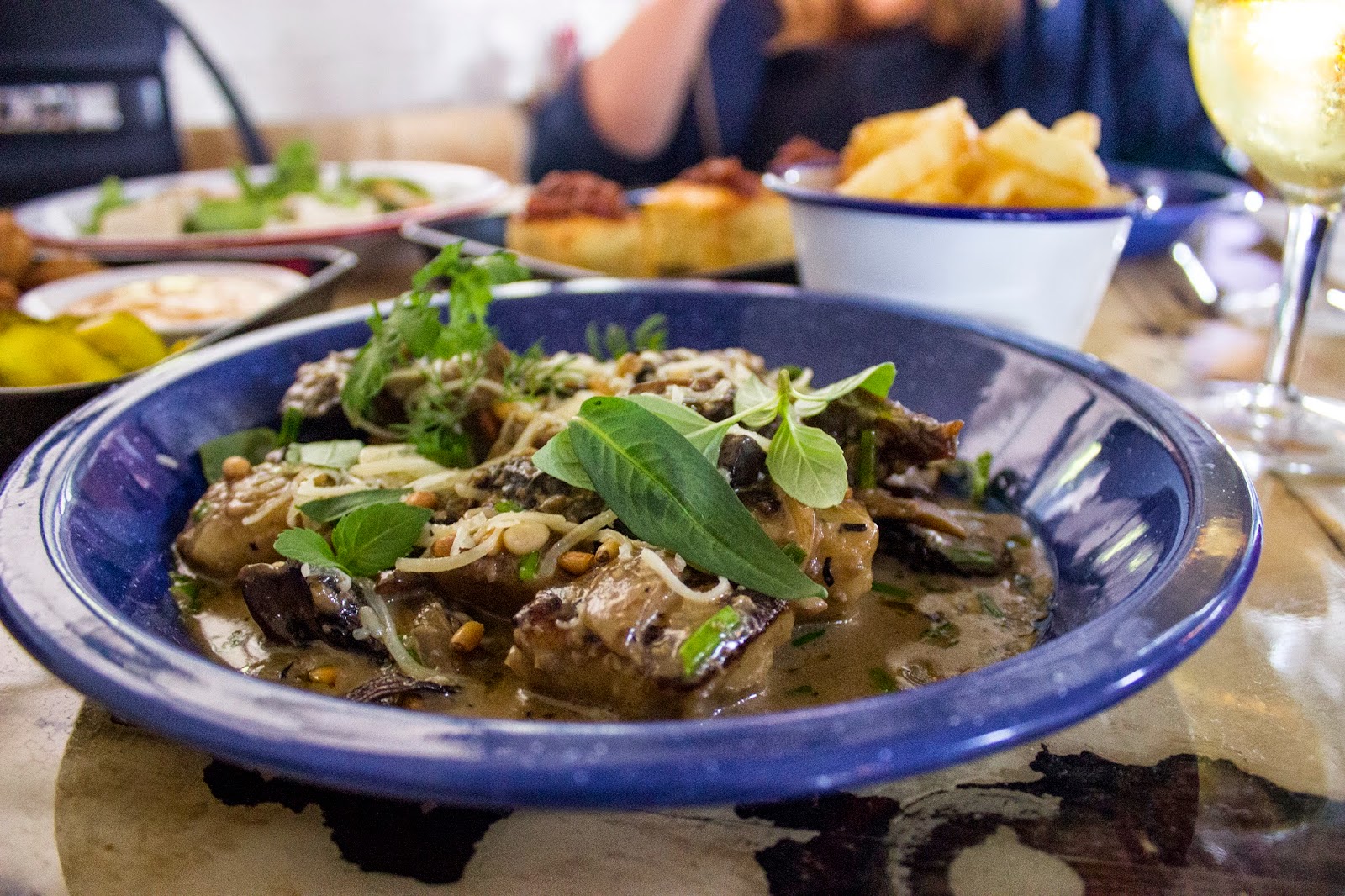 The pan-fried potato gnocchi with mushrooms, Verdelho cream and pecorino ($25.00) was a dish that jumped straight out at me immediately. I’ve spoken often of my love and obsession with gnocchi, and sometimes I often worry that it’s at the detriment to new restaurants as I have a high benchmark to meet.
The gnocchi here is soft but has a high flour ratio which gives it a strange texture to eat. It’s not a bad taste, but I think a little work needs to be done on their ratio. The sauce is nice – rich and comforting; well suited to the wet and cool weather we’re experiencing that day. I did find that the mushrooms were too big though and needed some variety instead of just large field mushrooms cut in chunks I would have loved to see some other mushrooms like swiss brown, enoki etc to bring some diversity and textural variety to the dish. But in saying that – not everyone loves their mushrooms like I do!
While I could see that some people might really like this dish, I have to admit it was my least preferred for the lunch. 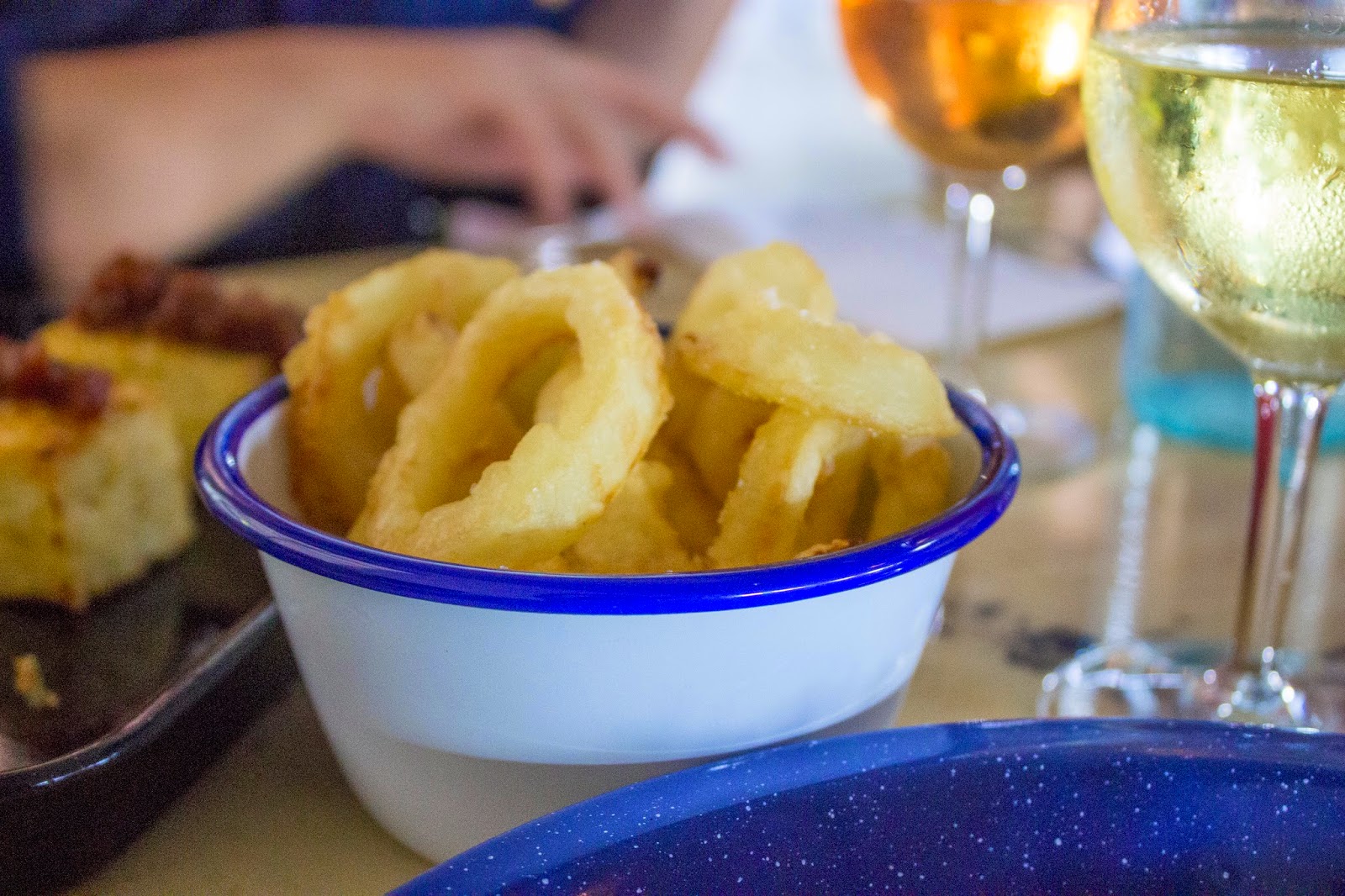 Our final savoury item at lunch are the onion rings ($9.00) which are golden and stacked in a bowl. It was a debate on whether to choose these or the fries, but since we had gnocchi we thought we’d choose the non-potato option.

The onion rings are crisp and not oily which is a double check. The onion inside wasn’t as sweet as some you find but that’s not a variable controllable by restaurants – it does come down to the luck of the draw with produce sometimes. I did find these lacking salt though, however once we got towards the bottom of the bowl I found they were seasoned well, so perhaps they just needed a bit of a shake up. For the price, it would have been great to have these accompanied by a relish or sauce of some kind – though we made do with the spicy mayo from the chicken wings to use. 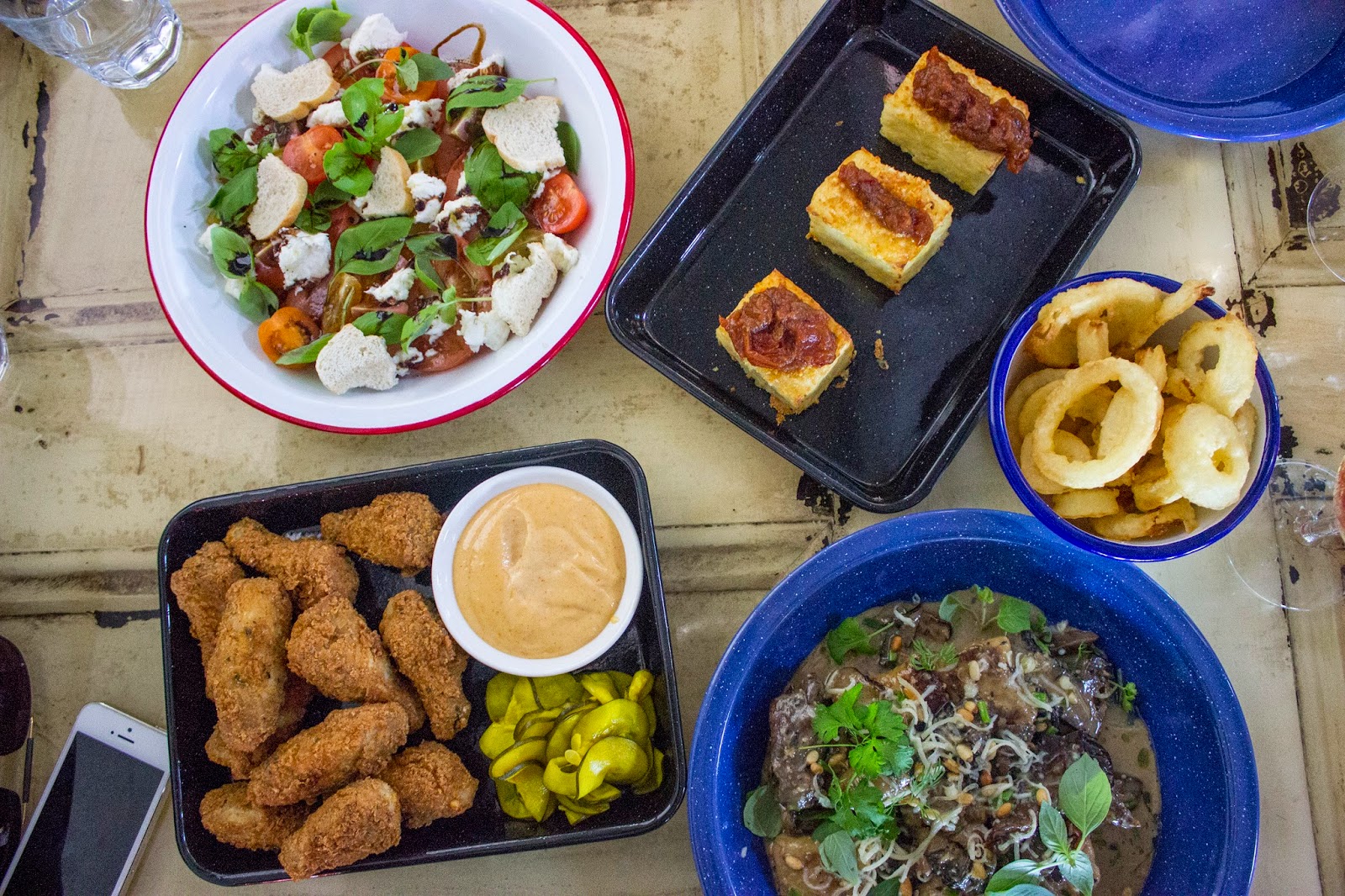 We’re pretty full after all those dishes but we’re not the type of people who can say no to dessert! We both agree to a nutella and banana popsicle ($5.00) which come out quickly. I have to quickly take a snap as they start melting instantly. 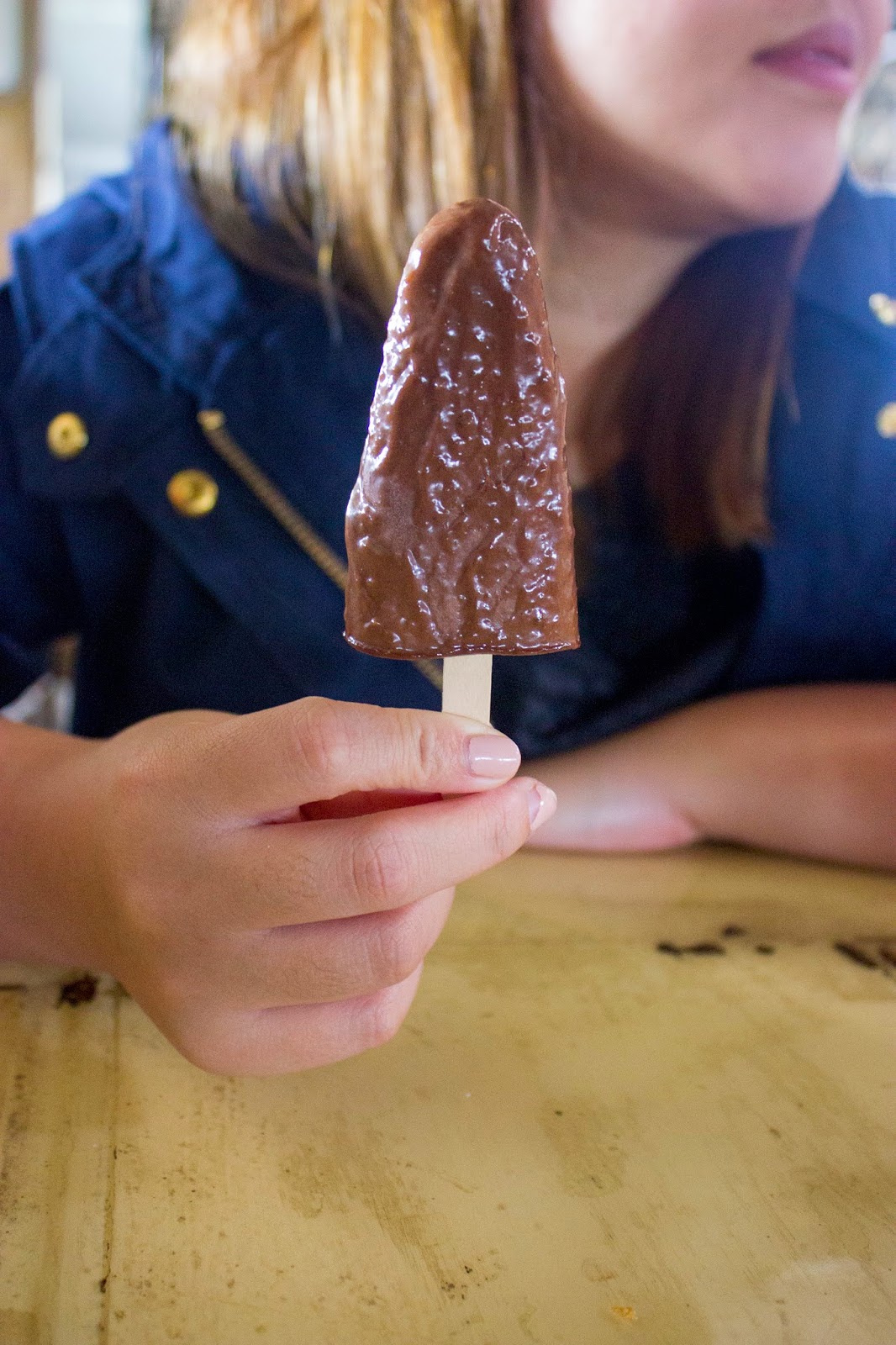 Having popsicles is a clever dessert offering, especially for a family friendly venue like this. While I loved the idea, I have to admit the execution was a little lacking for me personally. The texture was slimy, and in the places where the popsicles had been exposed without cover there was a thick film.
The nutella flavouring was dense which made me feel like it was literally just the two stated ingredients. I think a creamier and subtler version would have gone down a treat. But real chocoholics would probably relish the intensity of this. 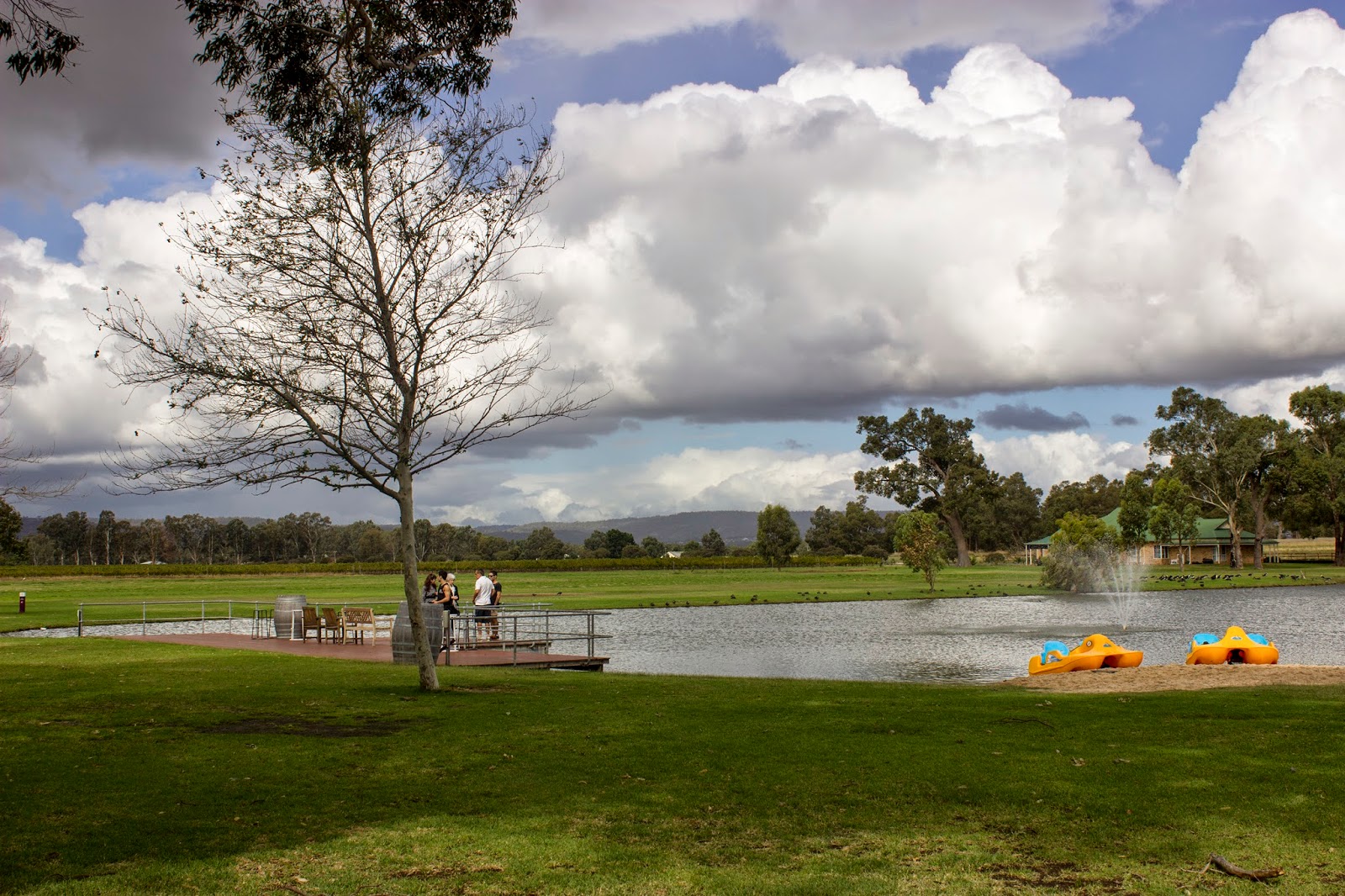 Once the skies cleared we found our opportunity to thank the staff for their attentive service and for the invitation to check out Oakover Grounds. I’m glad that the sun finally came out to play for a bit giving us the chance to see just how beautiful the estate is. It was very cute to see kids running around the lake and enjoying the splendour of Swan Valley.

A breakfast to say goodbye to 2014 at Flinderz

A trip with the Chief Chowzters to Singapore

Prawn roll freshly made on order and some of Perth

Here’s to the summer babies, the ones who love t

It might not look particularly pretty, but this is

Throwing back to a damn good wedge that I’m stil

🦀 seeing 2021 out with crab cakes, sunshine and

Kimchi cream cheese udon aka the guilty treat I ne

Honestly @mummucc you truly blow me away with stel