Looking for Wally at Run Amuk 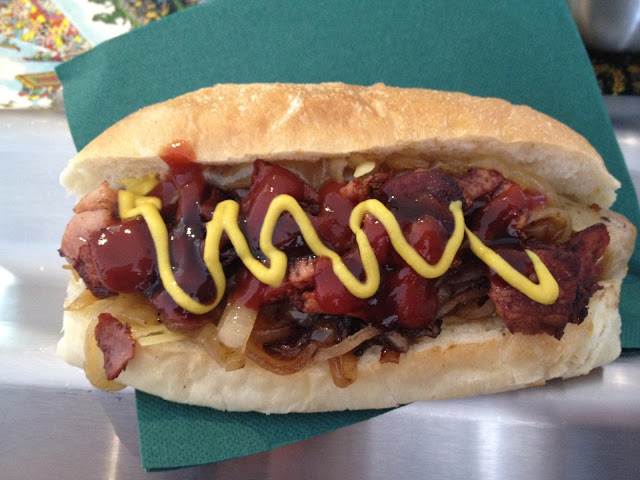 Ever since I heard about a new hot dog place opening up in Perth I have to admit I was waiting impatiently for a moment to go down to Fremantle and give it a go. It definitely was worth the wait!

Let me start off by saying that this place has a really fantastic vibe – not that I expected otherwise given its owned by the same people as Missy Moos. The decor is kitschy, with tables covered in Where’s Wally puzzles and ketchup bottles that have blinking eyes. The furniture is (barely) refurbished seats from Transperth buses. And the staff are really friendly, offering suggestions and joyful banter.

With my three friends Jay, Linda and Vee we ordered a decent spread – a hot dog each (as the only boy there Jay had two for which the staff quickly told us that no one had ever made it to three) and fries to share with delicious coriander and lime aioli. Between us all we picked only two varieties of hot dog… The Punk and Mischief. I guess with us, we know what sounds good and what we’re going to like. But the menu does offer some pretty amazing sounding selections.

It’s the anticipation that nearly kills you in places like this. The smell is heavenly, the sizzle of the dogs on the grill just tortuous foreplay. And when the table next to you gets their food first (fair enough they did order first), you’re tempted to reach over and steal what’s so rightly theirs.

However (and thank god) it’s not a long wait before the food comes out, and when it arrives I can’t help but smile at the ingenuity. It’s very cleverly sitting neatly on what looks like corrugated iron or whatever that material is that has a zigzag groove to it – perfect for placing a hot dog in between!

For my meal I chose Mischief ($12), though the Punk ($12) was extremely tempting (I had a bite of Vee’s and it was life changingly delicious). It was a crisp but smooth bratwurst, topped with crispy bacon, caramelised onions, cheddar and three sauces – mustard, tomato and BBQ. It even looks rebellious like it’s name suggests.

But in the end my hot dog was incredible too. A bratwurst with tomato relish, avocado seasoned with garlic and lime, cheddar, baby spinach, jalapenos, tortilla chips and sour cream. Ah-maz-ing! 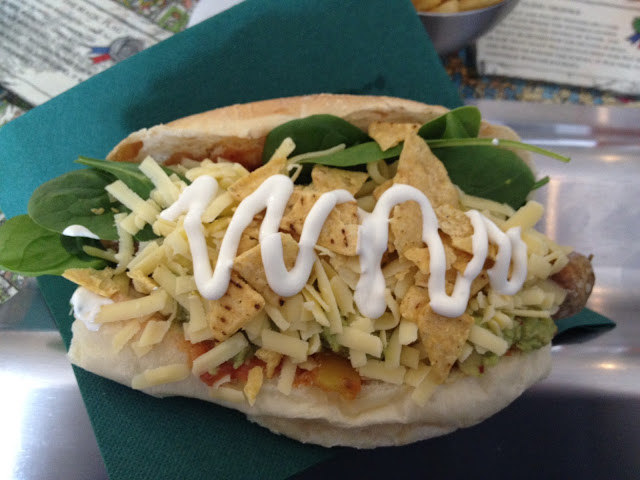 The flavours in our food were moorish; the combination of textures appetising. And the servings were definitely generous! I was completely stuffed by about halfway through the soft but doughy bun.

Overall I have to say it was a great meal. Nothing fancy or ostentatious, but just fast food made that little bit better so you dont feel guilty. If you’re in the area, I recommend you give it a go!

Jeremy and I have reservations to go to the outdoor iceskating rink, with dinner out in Fremantle afterwards. But he’s starving and I know I’ve taunted him time and time again with my references to the wonderful hot dogs at Run Amuck.

We decide to stick our heads in for a pre-skating snack as we’re trying to play it off as. I know that one of these will render me useless at eating later, so I just smile and try not to drool as Jeremy’s peruses the menu.

Since it’s July they have an Americana theme going on, which I soon find out (very jealously I might add) means chilli.

Why oh why is chilli con carne reserved for Mexican food, spuds or the very occasional pizza in Perth? It almost feels like a sin that we’re missing out on one of the staple fast food items in the US. But I won’t get started on that train, because there are so many things that we miss out on and this hungry blogger only has so much time.

With a little prompting for me, Jeremy decides to go for the special fourth of July chilli works dog. I think he knows that though I say I won’t be eating, I will actually be rudely poking my finger and snatching little scoops of food like a sneaky seagull. I think I actually may have made those noises during this process… though lucky for me he’s encouraging of share food so I get to dive right in. 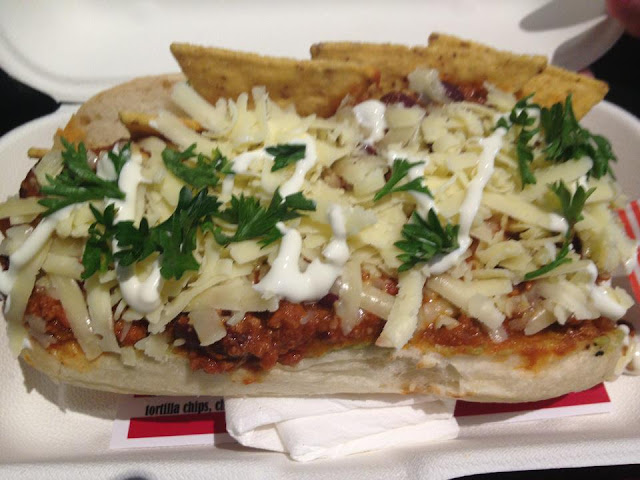 Wow. That should be the official name for this hot dog. Wow. So good that I hear it’s now a permanent item on the menu though another trip Freo ways will need to be made to confirm this.

It’s your same hot dog and bun (that pillowy, doughy bread is delightful and the perfect base to build this monster upon). But then you get mounds of chilli con carne which I’m very appreciative of the fact that has both the mince and those lovely kidney beans that are essential to a good chilli. Then there’s waves of guacamole, a smothering of melting cheddar cheese, sour cream, herbs and those oh so good and crunchy corn chips.

While I’m part drooling, part in a daze I am enjoying watching Jeremy try to eat this beast of a meal. It’s definitely hard to do, with chunks falling down and scattering along his take away container in big piles. But he doesn’t mind because the overall taste is like fireworks in his house (and mine for the bites I have). The chilli has just the right amount of heat on the back of your tongue and isn’t overly meaty or saucy – a really great consistency. It’s the perfect fuel to warm our hearts and bellies for our night out on the ice.

Sayer, the home of breakfast

Refuelling for shopping at Soda Rock