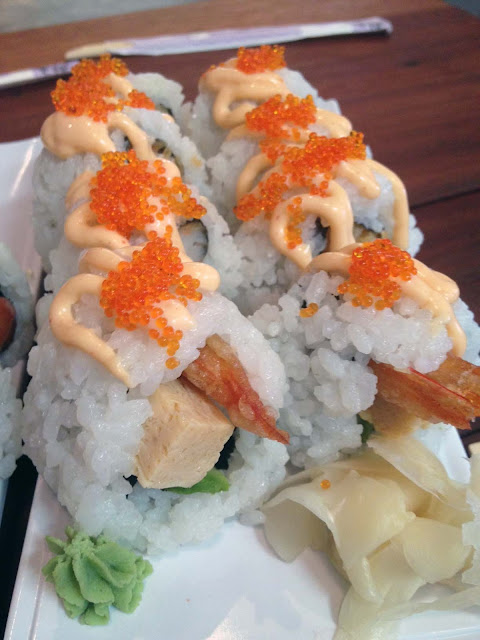 Let me start this post by saying… sometimes Jeremy and I can be utterly greedy when it comes to new restaurants and hungry bellies. Normally our process for places we haven’t been to is to ask for some guidance on how much to order and ask for any menu recommendations. However today, we failed to follow our own rules and went down a very greedy dark path. But more on that shortly.

After a great night at a wedding at Mulberry on Swan we woke up starving. Straight away we tossed around a few ideas for places to eat at but eventually settled on waiting the hour until Mr Munchies Sushi opened at 11am. 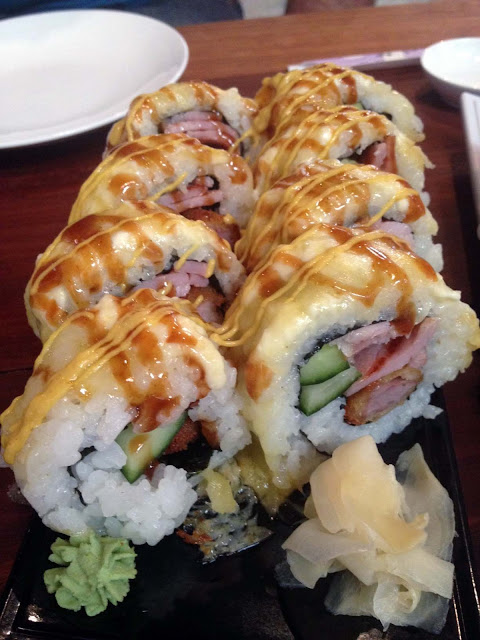 Neither of us have eaten here before but after following the reviews online and being big fans of Aisuru Sushi, we were pretty keen to try it out.

Hidden away down the Grilled Arcade in Mount Lawley, is the new Japanese place in town Mr Munchies Sushi. It’s small, funky and has a really cute Astro Boy mural on the wall. 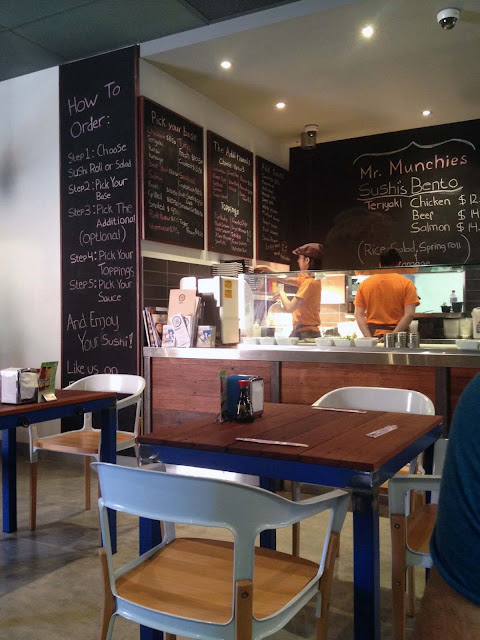 The menu is broken up into two formats. You have your standard menu items of different sushi rolls, salads and bentos. But on the back, you have something of another speed – “make your own sushi”. You can order rolls completely customised with fillings, toppings and different sauces.

However as tempting as that side of the menu was, we decided to try what they had to offer – next time we’ll go down the make your own route.

We start things off with a drink each. In his normal fashion, Jeremy chooses a ginger beer and I go for the self-serve frozen fanta. I mix in both raspberry and orange and sit there happily sipping while we peruse the food options. 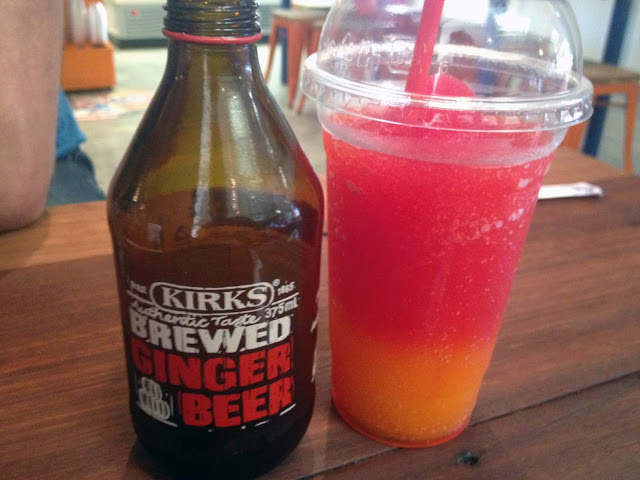 The menu works similar to Aisuru’s – different sushi rolls that you can order in a small size (four pieces) or a large size (eight pieces). Where it differs though is the sheer size of the sushi rolls. How I wish we had known that before we ordered four large rolls to share. Yes, we are greedy, greedy children sometimes.

We choose two rolls each but share everything between us. Though it sounds completely strange in its description, my first choice is the Katsu Kilpatrick Roll ($15.50). It’s pork katsu with bacon, cheese, cucumber and both barbeque and mustard sauce.

The pork katsu is juicy and crunchy – tender and moorish. The cheese is melted over the top from being grilled and has a great smokey taste. And the sauces on top make it taste like a burger almost – it’s like fast food sushi and after we’ve tried all the rolls ordered, Jeremy declares it his favourite. 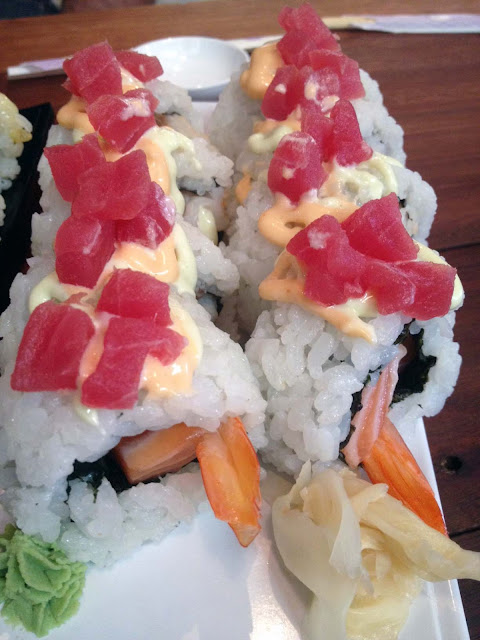 Next up we have Jeremy’s choice, the Seafood Roll ($18.50). It’s fresh salmon slices, steamed prawn and cucumber, topped with chunks of fresh tuna, chilli flakes, wasabi aioli and chilli mayonnaise. It’s fresh and soft in texture – the fish falling apart in my mouth. The liberal dose of sauces are sweet but savoury at the same time, and enhance the use of the fresh ingredients.

My favourite of all rolls we ordered comes out next – Mr Munchies Roll ($15.50). It’s tiger prawn fritters with crabsticks, sweet egg and avocado, and topped with chilli mayonnaise and fish eggs. The prawn is crunchy and succulent; the egg the exact right amount of sweetness. The crab stick is not your usual length of red and white fake crab, but instead its flaky chunks of what might actually be real seafood. And the roe on top, it just pops in your mouth with a salty ping that is so right. Yes, this was definitely the winner for the day. 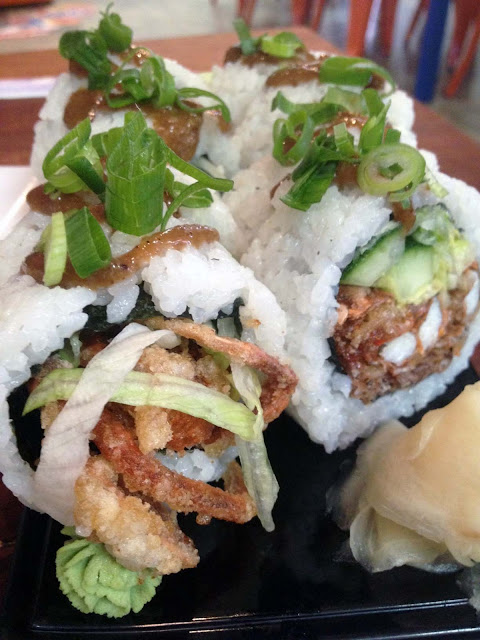 The final dish of our giant meal is the Crunchy Spider Roll ($15.50) which is deep fried soft shell crab, iceberg lettuce and cucumber with white sesame sauce and shallots.

Inside is a very generous serving of soft shell crab which is meaty and crisp. The flavouring is pleasant though I have to say my heart does lie with Aisuru’s version (also called the Spider Roll) with it’s wasabi mayonnaise. However that said, this is very enjoyable and the sesame sauce is unlike anything I’ve had before with sushi. It’s delicate and balanced and lovely. Plus since I’m such a big fan of spring onions I chomp away happily.

We took our time eating, smiling and chatting about the night before and life in general. However with our 32 pieces to get through finally we found ourselves breathing a little too heavily with 10 leftover. But the good thing about this place is that they do offer take away so we wrap up our remaining pieces (and eat them later in the night) and drag our pooched bellies out to collapse in the car. Greed does not pay off when sushi is involved!

I have to say, Mr Munchies was pretty cool. The pricing is reasonable and the ingredients fresh. The only real downfall here I found is that the sushi isn’t as tightly packed as it should be. Quite a few of our pieces fell apart as we tried to pick them up to eat – the rice and contents spilling out everywhere.  It just needs that tiny bit more of compression when rolling. But besides that, the food itself on offer is enjoyable and delicious. I can say I’ll be back soon to try the customisable sushi. Yum, yum!

The secret to success is in their sauce at Sayers

A trip with my mum to Taro Taro