New burgers and a new look at Jus Burgers 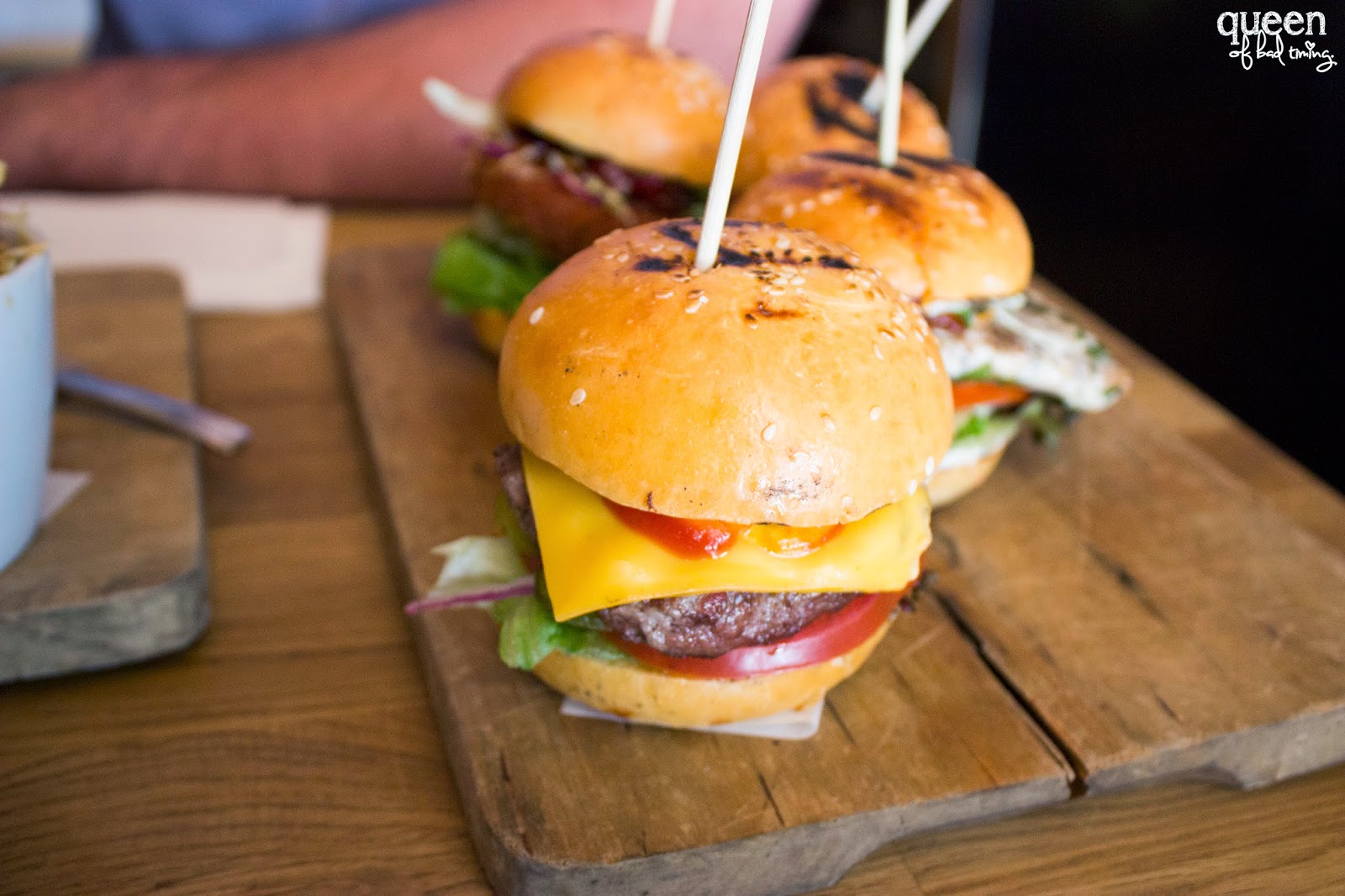 Recently I received a lovely email from Jus Burgers and Pinchos owner Justin Bell, inviting me to come to the newly renovated store in Leederville to try their new menu. Seeing as it has been just about forever since I last visited Jus Burgers, I was pretty keen to see what had changed. Justin and the Jus crew

Arriving on a Sunday for lunch Jeremy and I step in to what looks like a completely different store to meet Justin. Gone are the days of graffitied walls and loud music. Instead, in it’s place is a beautiful fit out by the same team behind Cantina 663 and I believe Ace Pizza too. It’s clean, modern and simply gorgeous. I really like the combination of exposed brick, timber, white space and just bursts of blackboard and greenery accents throughout.

Justin tells us that at night the space transforms into a warm, intimate venue lit simply by candlelight. I definitely need to come in one night to check it out I think! The vast refurbishment investment has been worth the money in my opinion. 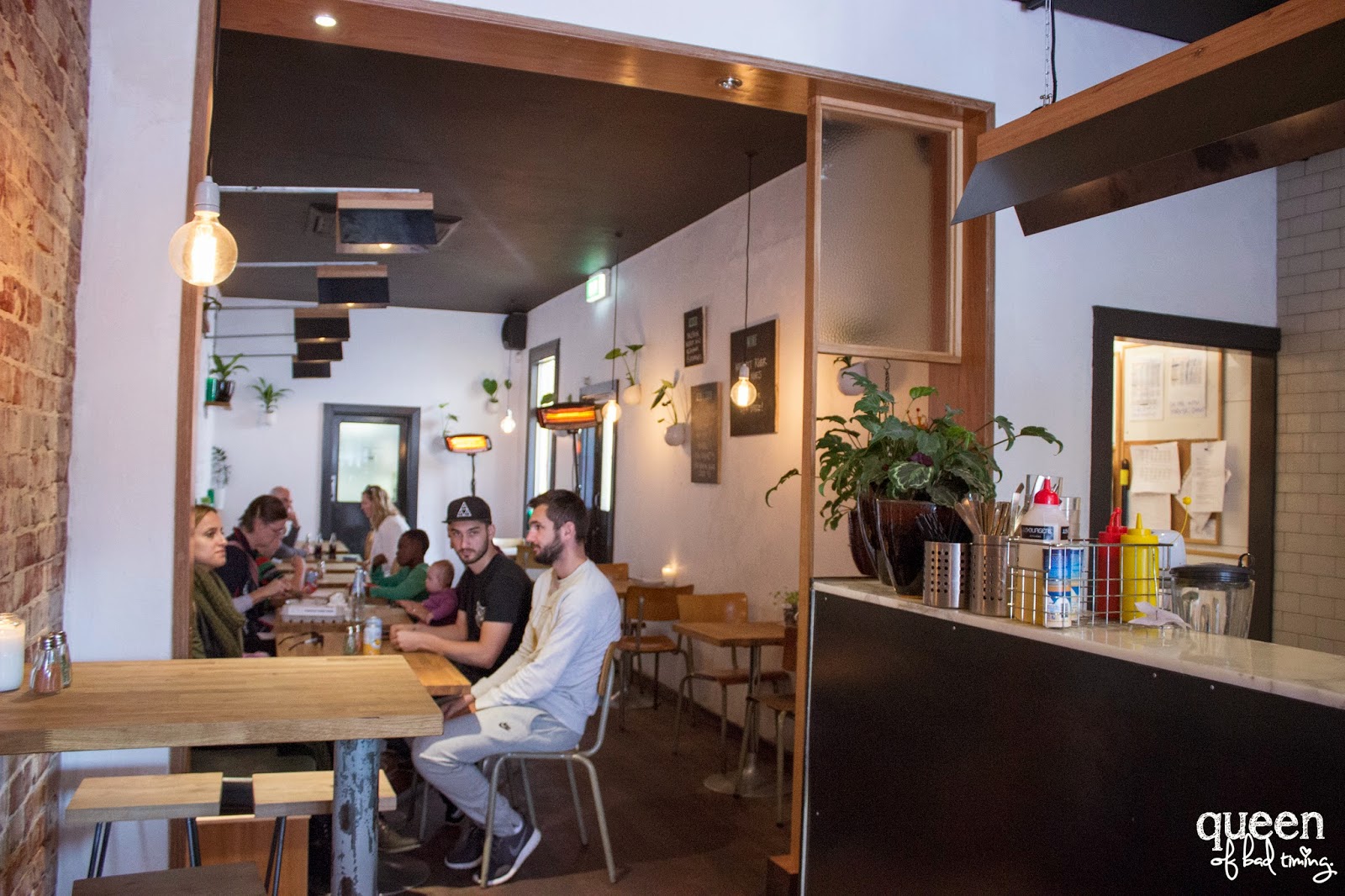 Hearing about the decision to refresh the Jus brand, stores and burgers on offer was really interesting. While I can appreciate other burger stores offerings, there’s something quite special about this locally owned venue. While Justin has five stores under his belt, he still is spends shifts at them all, cooking and chatting with customers. He is one hard working man who puts his heart and soul into his restaurants! 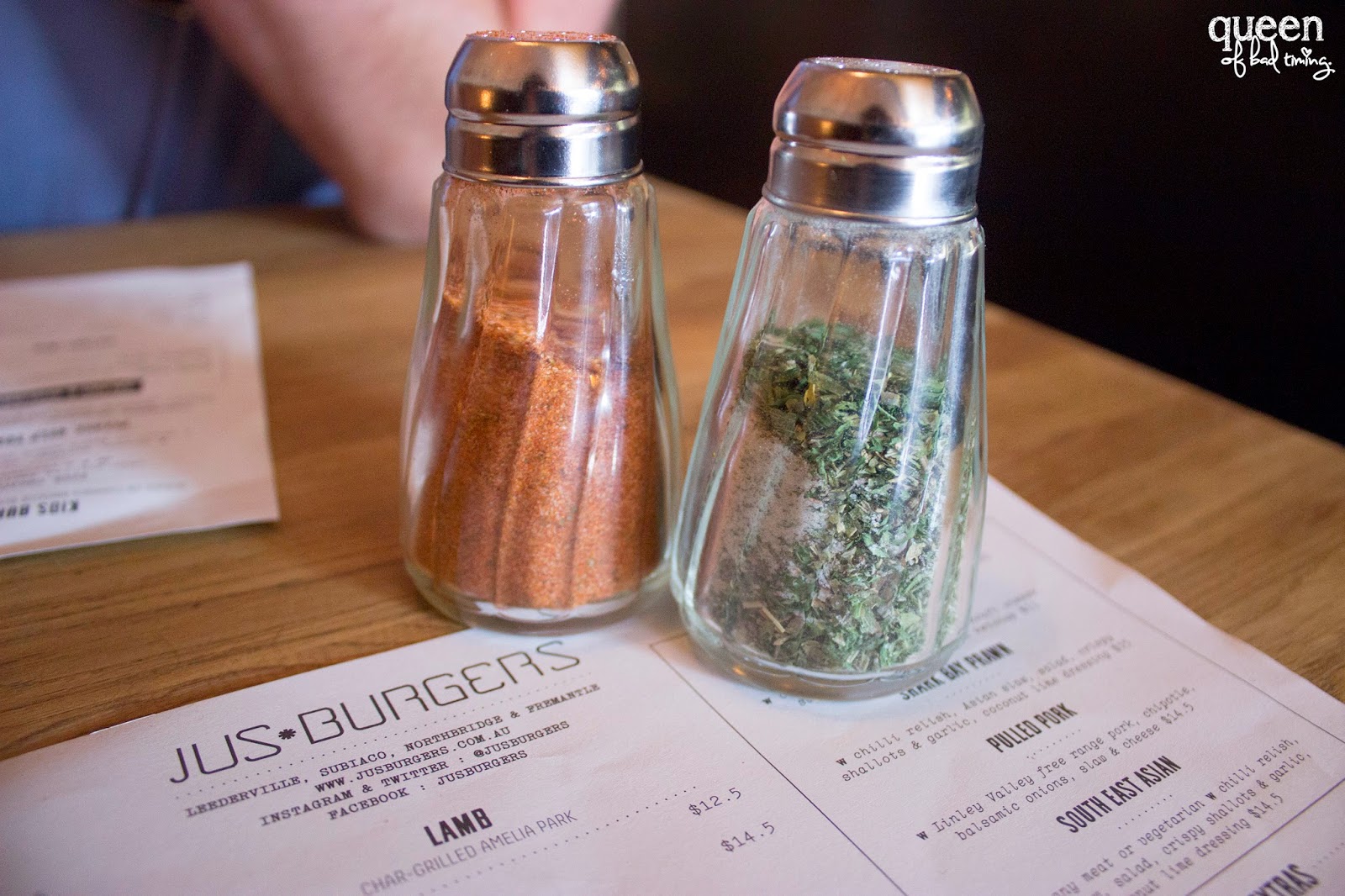 Justin walks us through the new menu, pointing out that there’s still the old favourites present but now there’s a section of diner style burgers, sliders and even some new sides. In order to be a pack leader and showcase a different side to their menu, they’re offering a selection of upmarket burgers that have great produce and flavours. Kind of like your Huxtaburger in Melbourne.

And the best part, the new diner style burgers (four different types) all come on Jean Pierre Sancho brioche buns. I was already sold before the food hit our table. 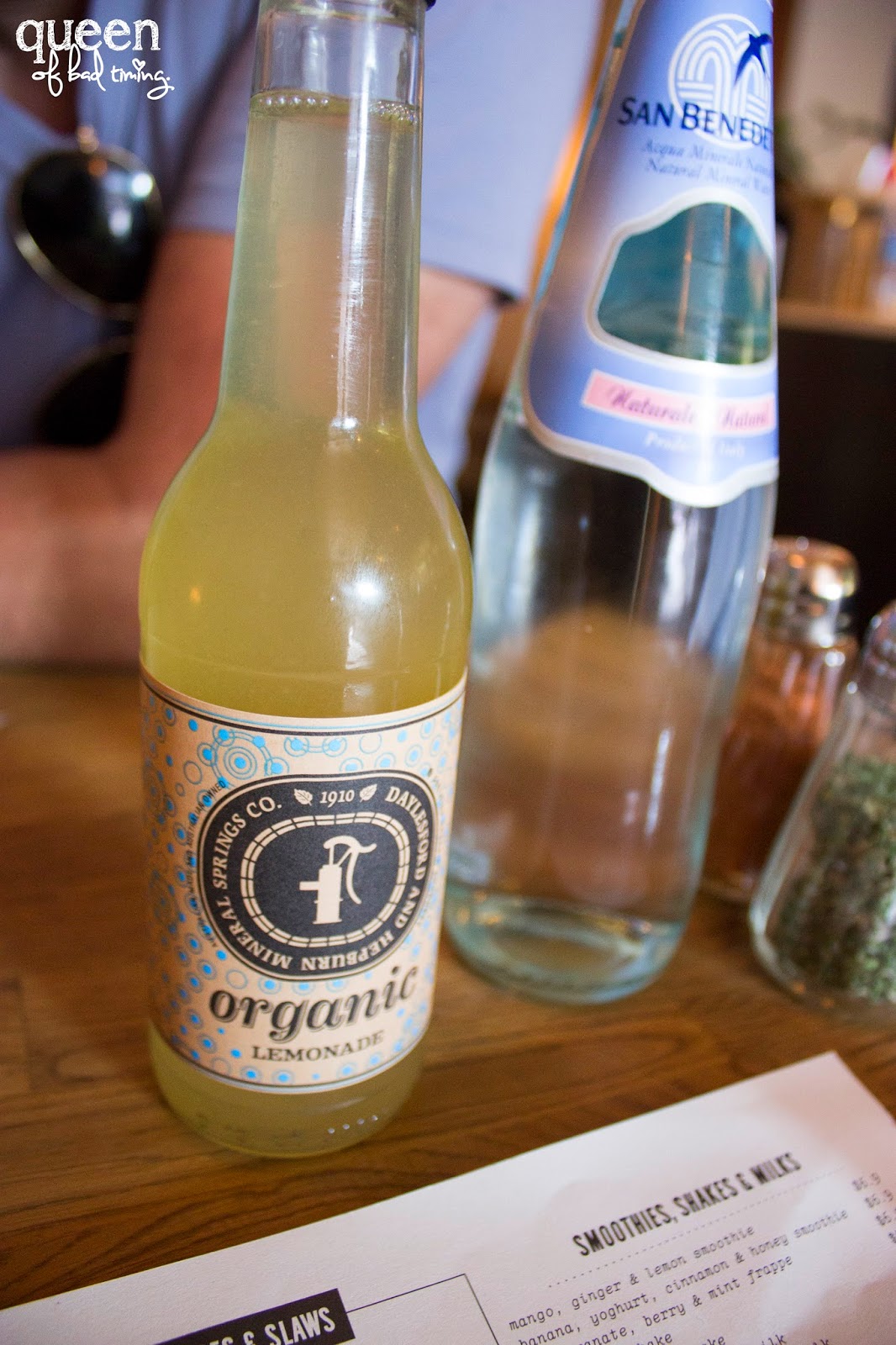 It’s meals like this that I really love. Literally the only thing we need to choose is a drink each – the food is sent out by our host for the afternoon. It’s a blissful way to spend a Sunday!

I go for a still water since I know there’s going to be lots of food to eat, and Jeremy opts for the organic lemonade which I quickly steal a sip of. It’s tart and lightly sparkled, separating itself from some of your more mainstream lemonades. The sides are the first to hit our table, a mouth watering array of delicious goodness. I know they’re not new to Jus Burgers but I’m so pleased to see that their famous onion rings with garlic aioli ($6.00) have still been included. For me, they’re something I can’t get enough of and I think Jus Burger’s version are easily one of the best I’ve ever eaten. Jeremy bites into one and nods his approval quickly – he’s definitely in agreement! 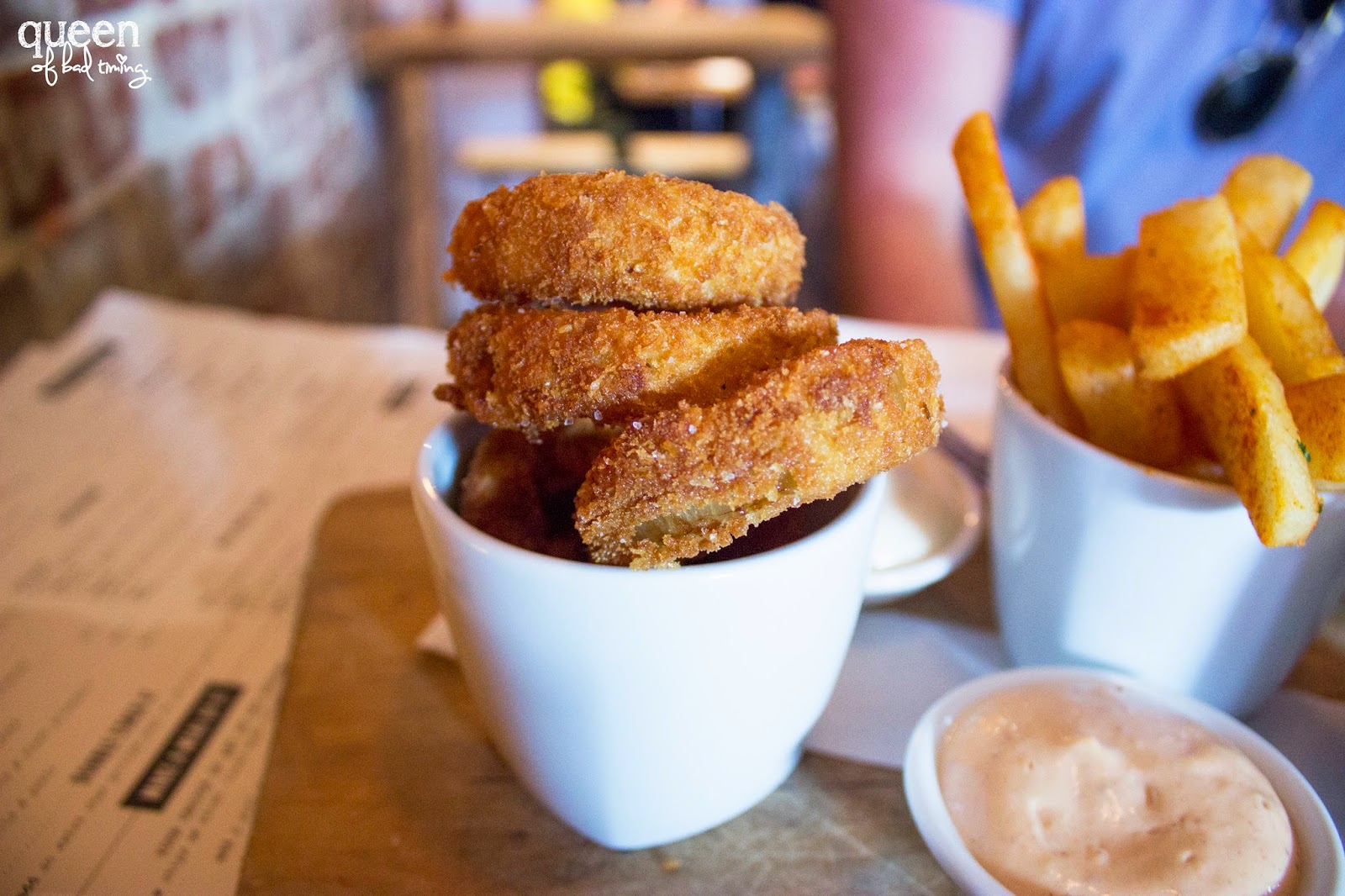 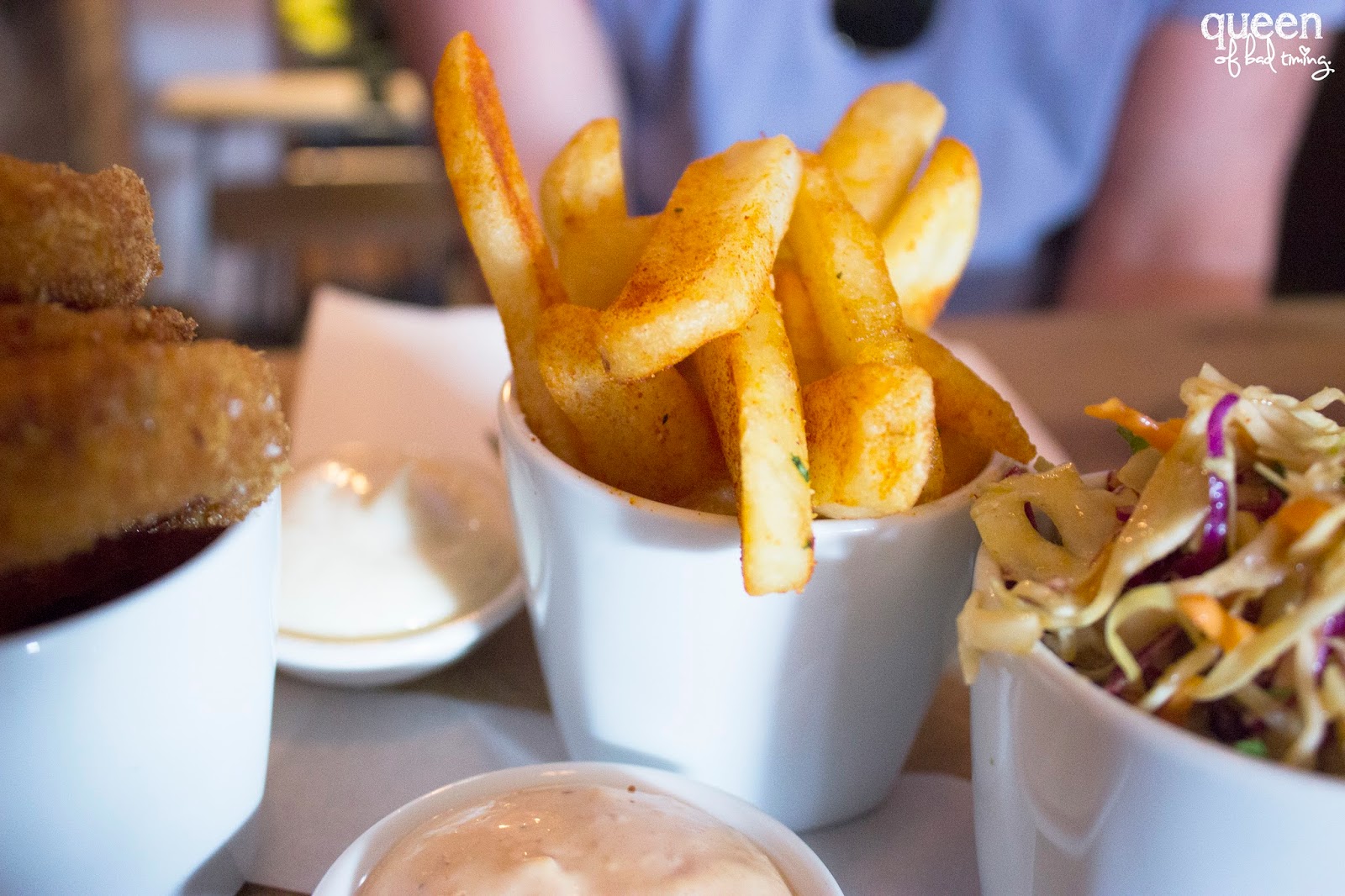 There’s now several different chips you can choose from. In this instance we’re given the spiced salted chips ($5.00) with a creamy chipotle sauce to dip them in. I really enjoy the texture – soft, fluffy and hot all the way through. There’s just enough of a chilli flavour to make you sit up and pay attention.

There’s also shakers of spiced salt and farmhouse salt on the table to customise your chips with different flavours. Very cute and a great idea. Next time I’ll have my eye on the parmesan and truffle oil fries – mmm-mmm! 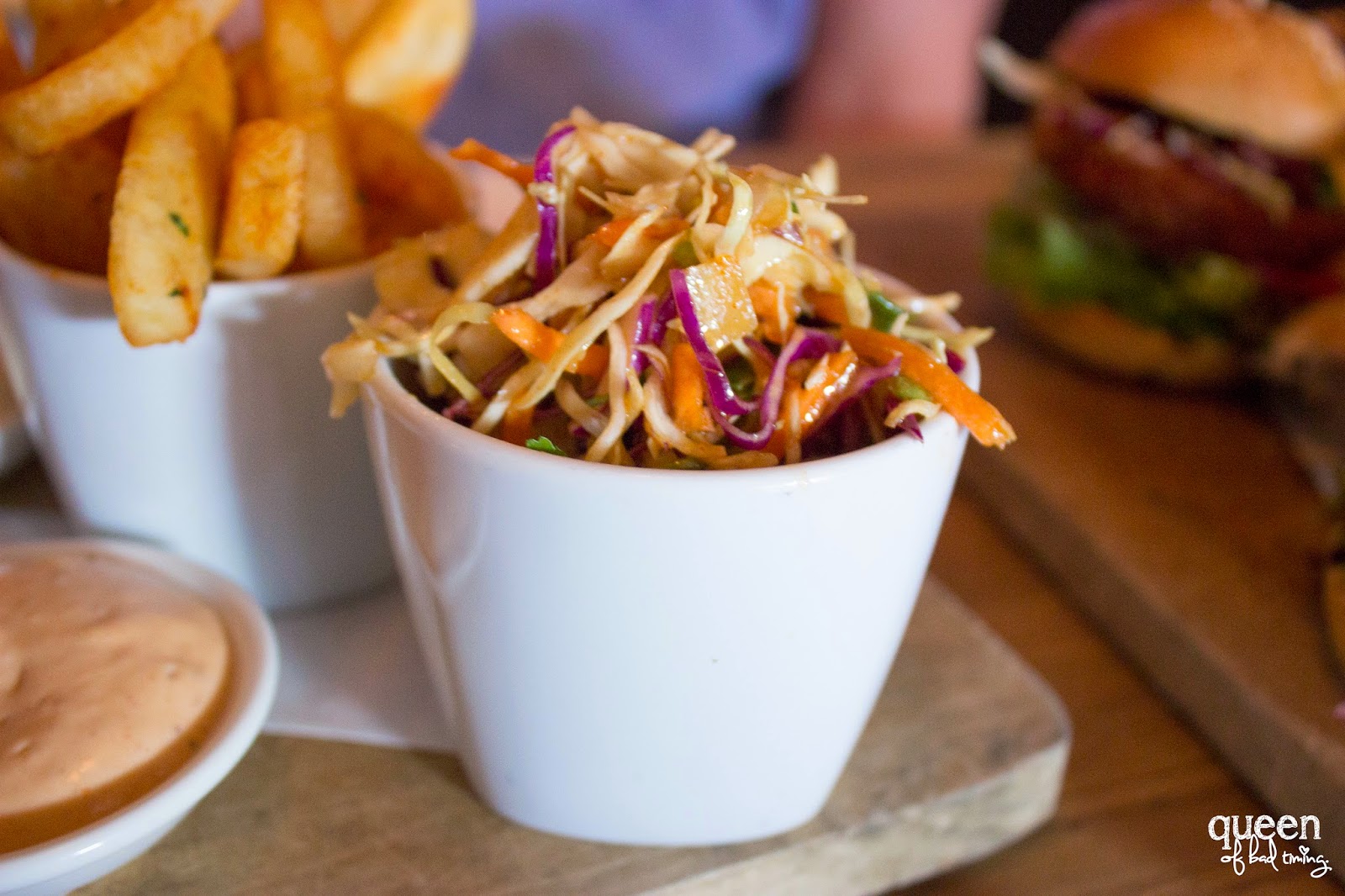 The slaw ($5.00) is a light and creamy side salad that has a punch from the underlying vinegar flavouring. It’s a nice alternative to your standard fried offerings. 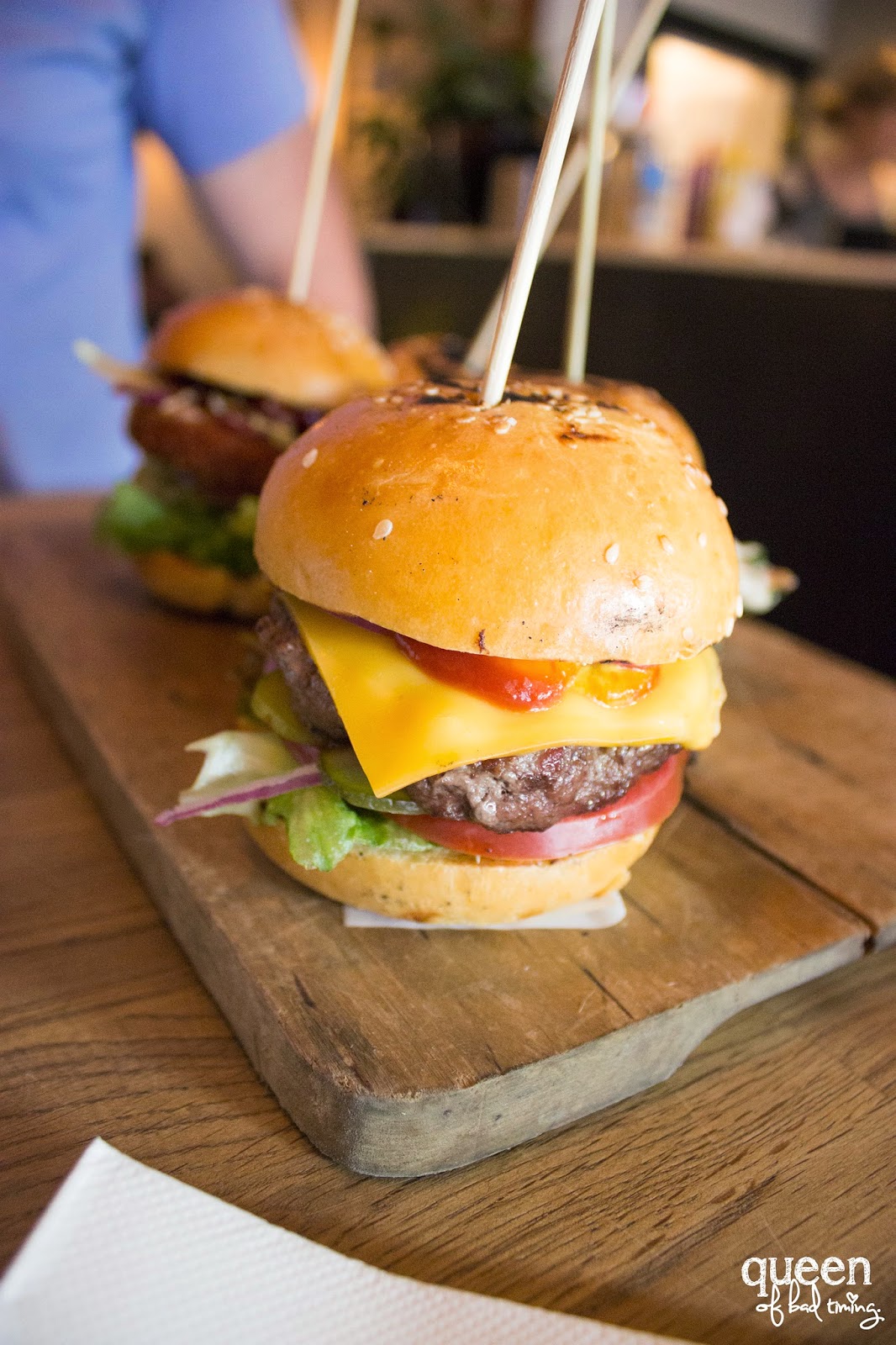 Americano
Instead of choosing one diner style burger to eat, Justin sends out a slider version of each of the four on offer. There’s a collective hush between Jeremy and I as we take in what looks like some of the best sliders we’ve seen. Those brioche buns really do lure you in! So buttery and glossy…
We’re handed a nice pile of napkins with a smile and a warning – these can get messy – but that’s where the fun lies!
I’m quick to dive into the Americano ($13 for standard burger size) which is char grilled beef, pickles, Kraft cheese, salad, mustard and ketchup. It looks just like a cartoon version of a burger – pretty as a picture! One word is all I really need to say – yum. Soft, pillowy buns with well seasoned, well cooked beef and all the right flavours that make this a household classic. I particularly like that they use Kraft cheese, it’s familiar and comforting and just a little melty. This and the next slider are my favourites for sure. 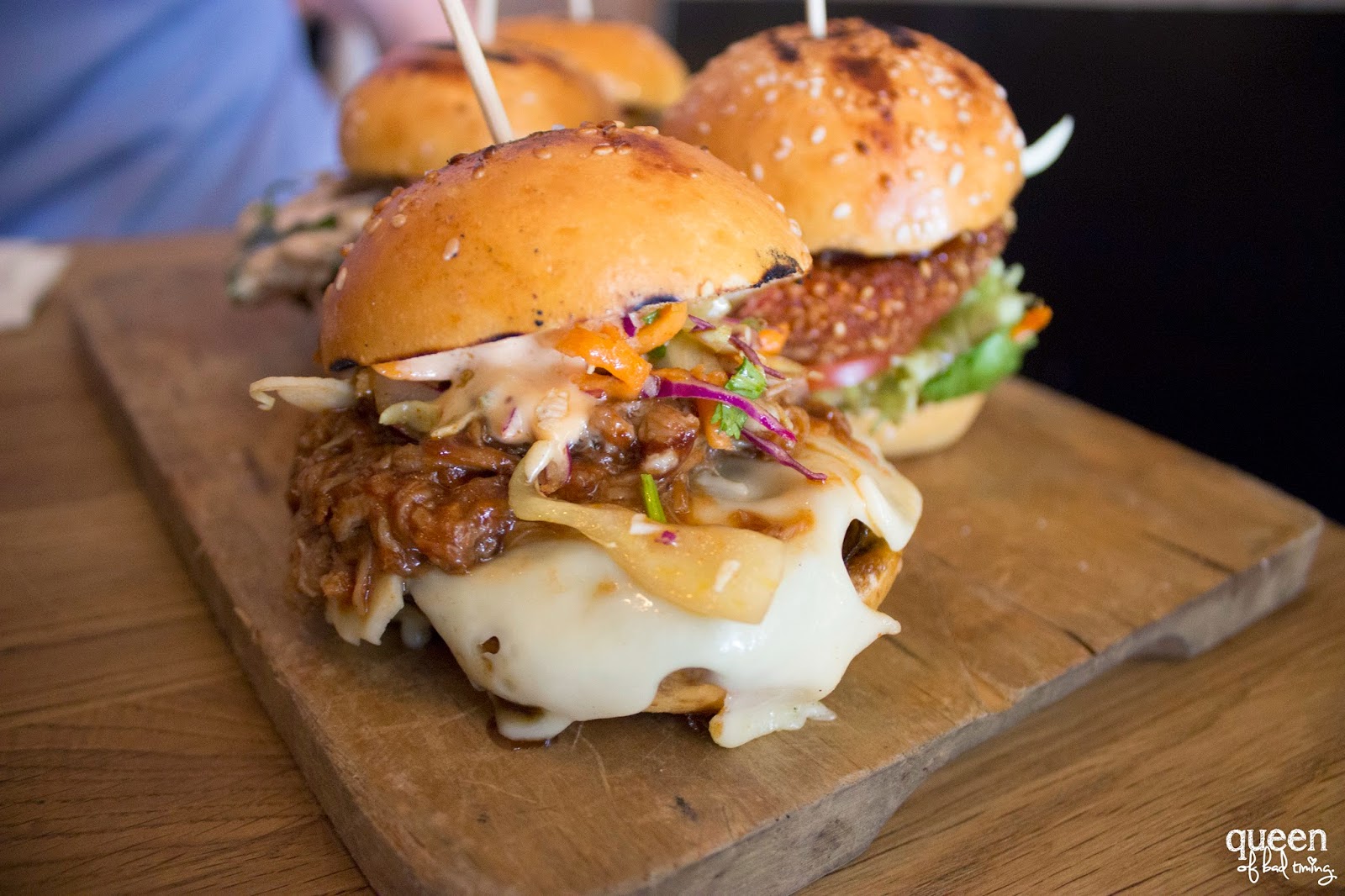 Pulled pork
Jeremy hands me the pulled pork ($14.50 for a standard burger size) once he reaches the halfway point. It’s definitely the sloppiest of the bunch but the aroma wafting from it is enough to make my mouth water. Is there anything in the world better than pulled pork?
Stacked between the charred brioche bun halves is Linley Valley free range pork with chipotle, balsamic onions, slaw and melted cheese. I love the sweetness of those onions and the creaminess of the cheese which is balanced by the tang of the slaw. The marinade on the pork is good enough to be bottled – which Justin tells us is the plan, they’re going to sell it in store soon. Great idea! 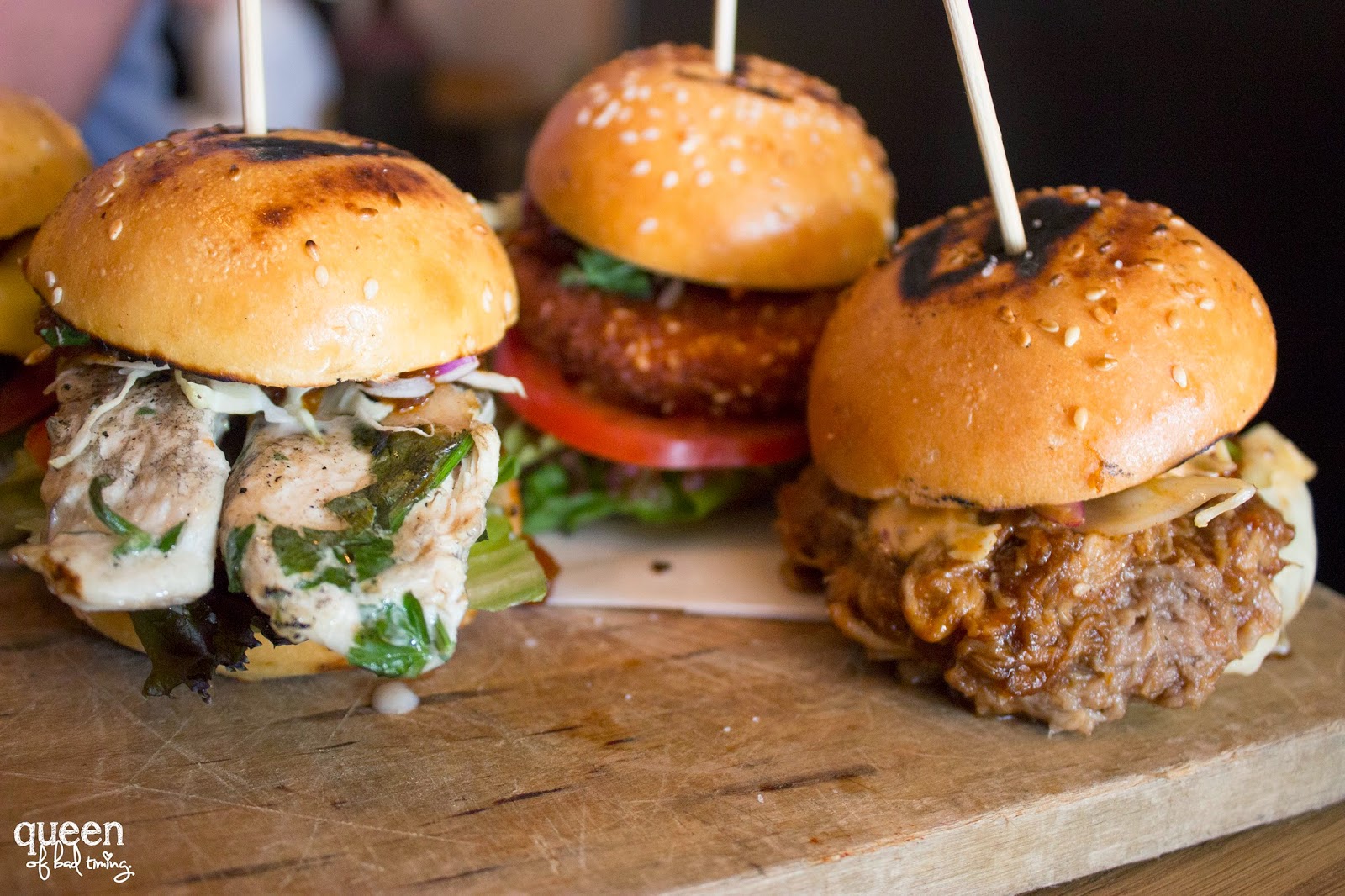 Jeremy’s favourite of the sliders is a toss up between the pork and the Shark Bay prawn. It’s a crisp prawn patty with chilli relish, Asian slaw, salad, crispy shallots and garlic, and coconut lime dressing. The Asian flavours are really punchy and well balanced which is often problematic. I like the zing of the citrus which is a natural compliment to seafood. So tasty and full of contrasting textures. 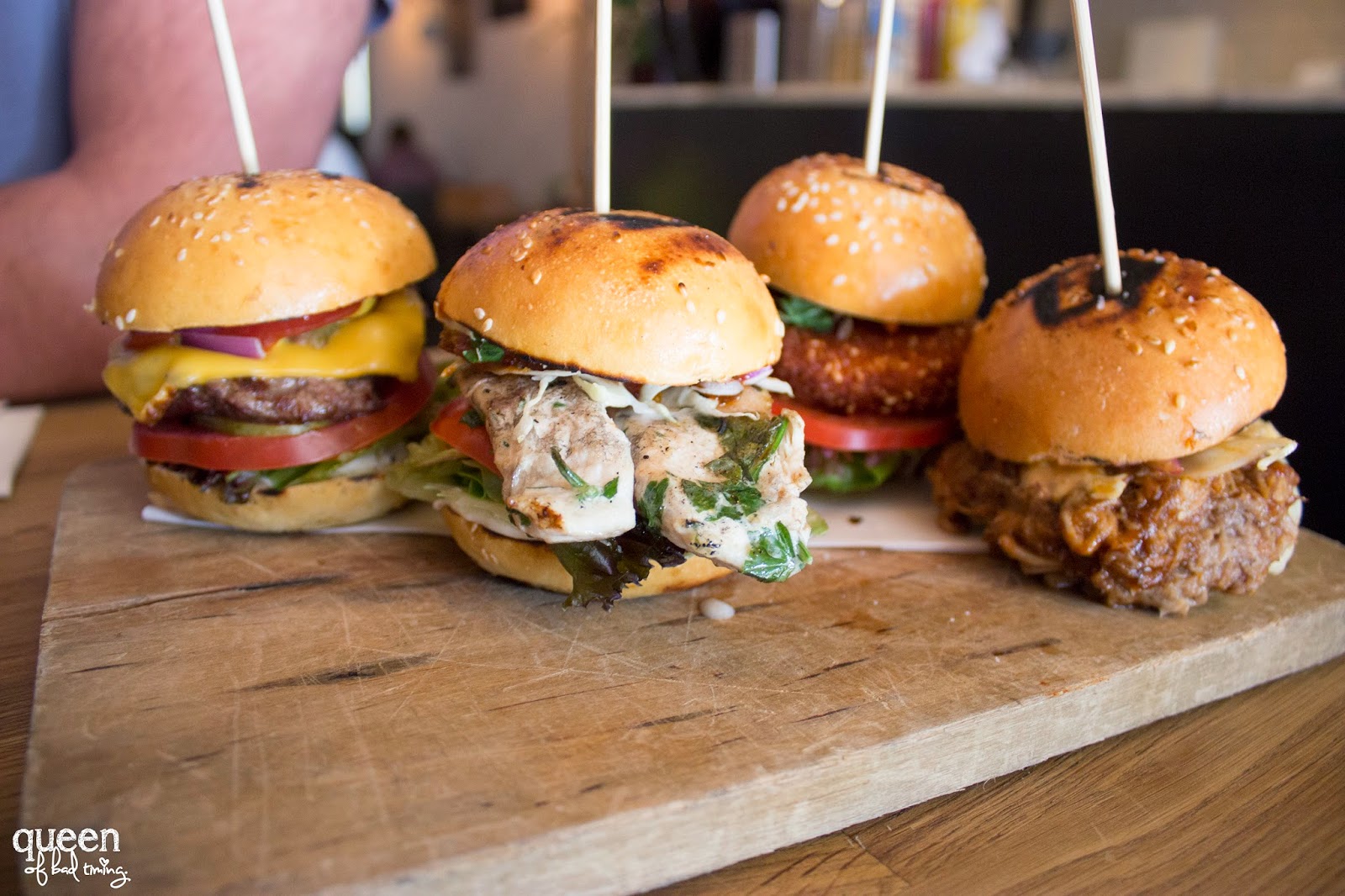 The final slider is similar to the prawn, known as South East Asian ($14.50 for standard burger size). It’s the same burger but with the option to chose your protein (or opt for vegetarian). While normally I’m not a chicken person, it was nice to try this protein given I wouldn’t usually order it. By now I’m starting to feel like I just might spontaneously combust with the amount of food we’ve eaten! 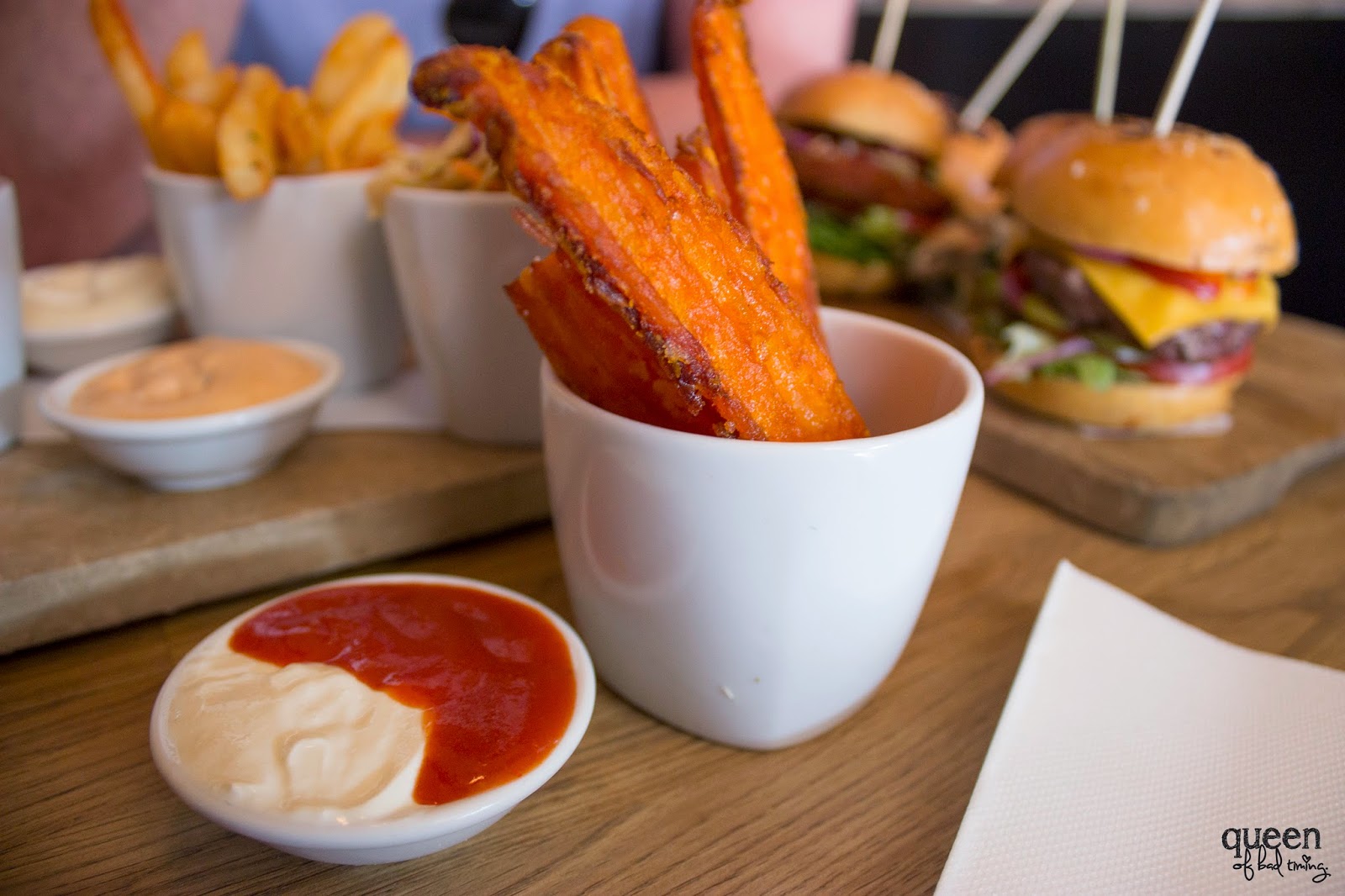 Sweet potato wedges
To finish things off we tackle the new menu item of sweet potato wedges with sour cream and sriracha chilli sauce ($8.00). I adore sweet potato and these wedges are long and finger like, glowing orange and smelling pretty damn good. They’re not as crunchy as I had suspected they might be, but the flavour and freshness on the inside is spot on.
Having the combination of hot sriracha (which we use a lot in our house!) and the cooling sour cream is a nice change to your usual sweet chilli and sour cream combo. I can see these fast becoming a favourite amongst regulars. 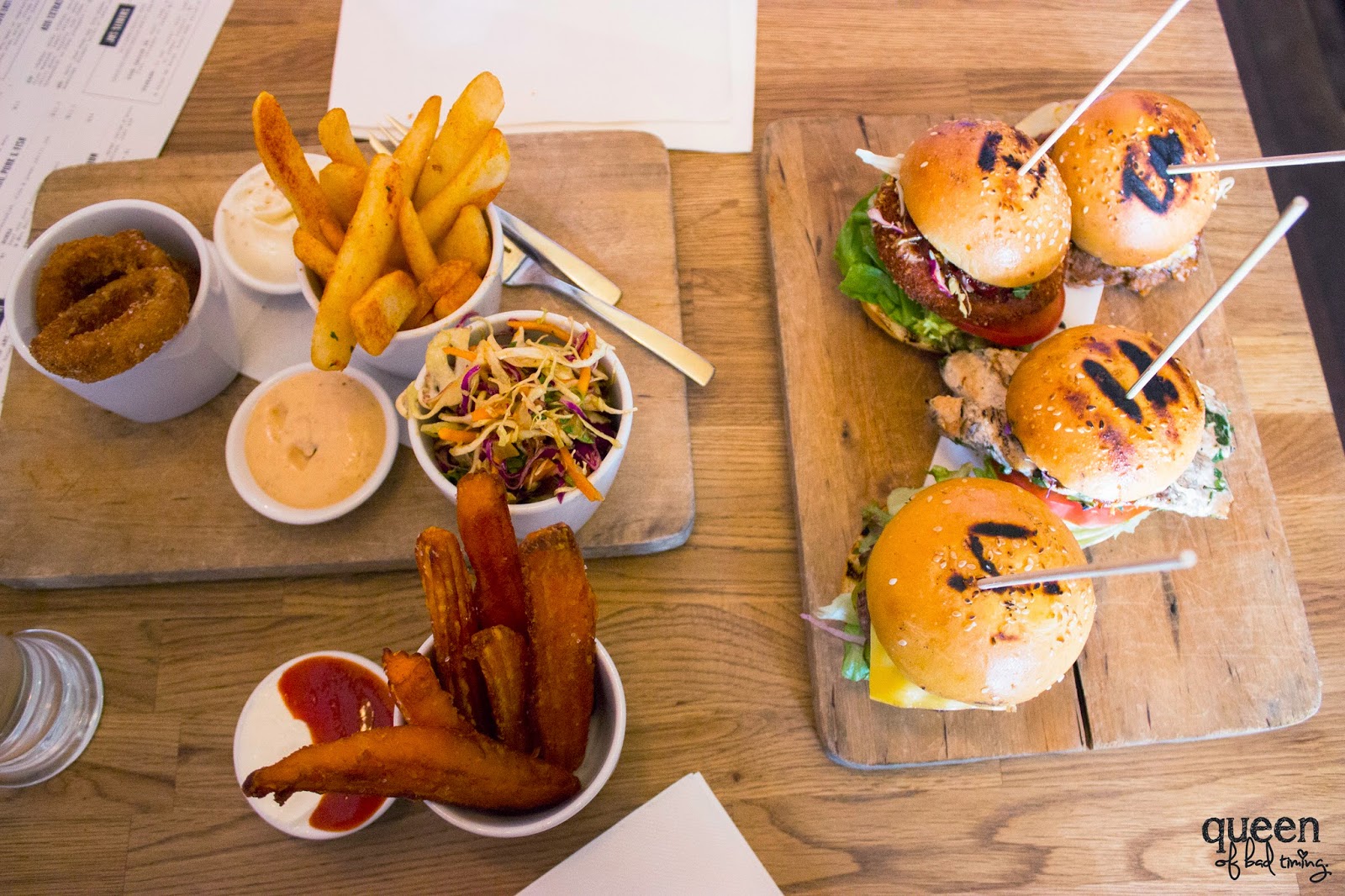 You can check out the new look venue and new menu at Leederville now, and it will be rolled out at the other Jus Burger stores over the coming weeks. I also discovered when writing this that you can preorder your burgers for pickup online, which is a handy option if you want to beat the queue.

A big thank you to Justin Bell and the team at Leederville Jus Burgers for hosting Jeremy and I for lunch. We definitely waddled out of the restaurant and were full for a loooonnnnggg time after!

A Truffle Kerfuffle weekend away