Out of touch at Outback Jacks 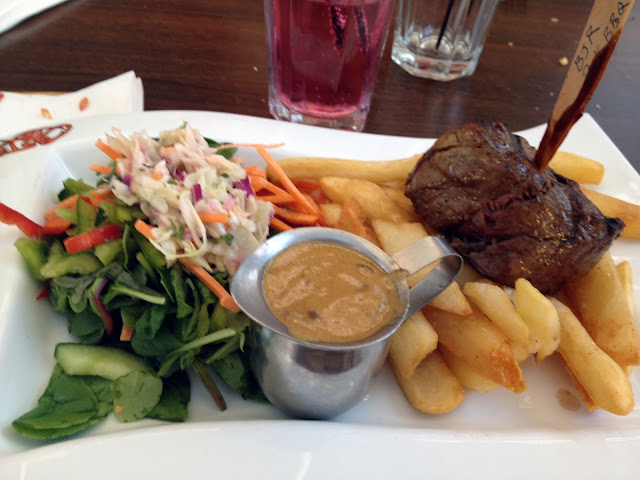 I’ve heard some very mixed reviews about Outback Jacks which has left me preferring the likes of Hippo Creek and Squires Loft etc when it comes to going out to a steakhouse. Especially when I admit that those “mixed” reviews are particularly skewed to the negative.

It’s not a place I’d choose to go to when there’s so many other great eateries around, but on this weekend the choice was made for us since it’s Jeremy’s dad’s birthday. It’s family friendly and table settings for children even come with crayons to occupy the time. Probably a bit too young for Jeremy’s littlest brother but the thought counts.

It has been a stifling 39 degree day and since we’ve arrived for an early dinner at 6pm, the heat is lingering. We’re seated outside which has fans but they don’t get turned on until an hour or so later so we struggle at the start of our meal.

The menu is extensive. There’s your normal steakhouse varieties of steak, ribs and even some game meats like kangaroo and crocodile. Mine and a couple others are missing pages from our menu but there’s a couple with the full listing so I sneak a peak before making my choice.

We let his parents choose the entrees for the table to share, enough to cover the seven of us which includes Jeremy’s twin brother and his girlfriend. They select a couple servings of the Bruschetta ($9.95) which is garlic bread topped with Outback Jacks bruschetta mix. There’s also a serve of Skippy Dundee ($16.95) which is three crocodile skewers and three kangaroo skewers served with bush chutney. And for the final share entree they pick the Boss Finger Food Taster ($23.95). It’s bush pepper coated calamari and crocodile, chicken wings, chunky wedges, rump sausage and sweet chilli plus garlic aioli dipping sauce.

The bruschetta was a bit of a let down which is a bad start to the meal. The bread is basically a baguette cut in half which is fine but the mixture on top is incredibly finely diced tomato, red onion and slivers of cheese, then drizzled with sticky balsamic vinegar. First off, it’s really hard to eat because of how small the toppings are – coupled with the fact that the staff don’t give us any plates to eat them over. Needless to say, we make a mess.

The crocodile and kangaroo skewers are simple and taste okay. They don’t seem to have any seasoning or taste enhancement, so they’re an easy showcase of these meats – a good way to start someone off if they’re not familiar with these meats.

The tasting plate is a pretty decent choice to enjoy. The wedges are delicious, potatoey and crunchy on the outside. The calamari and crocodile look the same, and taste not too bad though a little dry. I didn’t try the rump sausage but everyone that did seem to think it tasted quite nice.

After eating entrees I went upstairs to wash my hands and when I came back down our mains were already waiting. Strange because normally you have more of a gap between them – and when I tried my food it wasn’t as hot as I might have liked but it still smelt good.

I’ve chosen ‘Jaquie’s Cut’ ($27.95), which is a 180gram eye fillet that comes with chips, garden salad and coleslaw on the side. I choose a mushroom sauce to accompany it and ask for my steak to be cooked rare. The steak is actually cooked perfectly which I know shouldn’t surprise me but it does a little. It’s trimmed nicely and there’s not much fat at all so it’s as silky and tender as this cut should be. It’s not been rested though so when I start cutting into it, the juices spill out all over my plate including onto my chips.
The chips are just how I like them. Crunchy and oily – though most people probably prefer them more starchy. But they go down a treat and I’m happy to declare them delicious.
The sauce on the other hand is a bit of a different story. I find it always so surprising when I go to a steakhouse and they can’t produce a good mushroom sauce given how easy the recipe is. This one has a strange aftertaste and doesn’t have that velvety smoothness that can be sinful and wonderful.
The salad regretfully is extremely dry and wilted so I end up leaving that on my plate while I polish off my steak and chips. 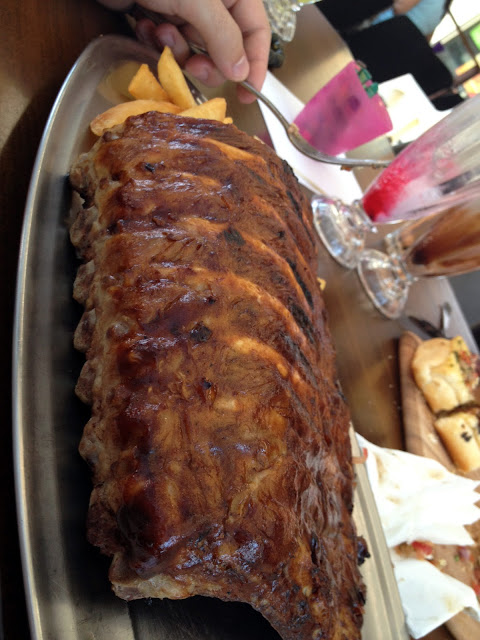 Jeremy chooses ‘Big Jacks Rack’ ($39.95) which is a full bone rack of ribs slow cooked for 8 hours with a smokey BBQ sauce. It’s served with chips and you can choose the meat from lamb, beef or pork. He chooses the latter.

It comes out looking pretty impressive, though I can see straight away there’s not enough sauce for the type of rib experience we both like (such as at Tony Romas where you can’t help but keep licking your fingers).

Like mine, his chips are also perfect and he soon sets about carving up his ribs into single bite sections. Though its been slow cooked, the meat is not as tender as it should be, nor is it falling off the bone. There are some sections where this has been achieved but the bite he shares with me is dry and disappointing.

The rest of our diners choose these dishes:

The salmon takes the longest to come out of all the meals, but I have to admit the skin does look at least a little crispy.
I’m always quite skeptical of places that serve pasta when they don’t specialise in it but the feedback from those who ate it was that it was pretty nice so that’s a bonus for the meal.
All up I have to say Outback Jacks was pretty much as I expected. There were some positives to our meal but I know I won’t be returning back here. The staff seemed irritated the whole time, the food was inconsistent and there were some basic service issues such as no plates for entrees, me being given a butter knife for my steak when everyone else got given steak knives, and Jeremy’s drink coming out wrong.
It’s a really small gripe, but I also didn’t like that they couldn’t bring the bill out but instead said when you’re ready to go, please go inside to pay. All in all, a bit of a disappointing meal for a franchise that really could have so much potential. After all, people do love a good steak.

Ringing in the lunar new year at Silks

A Taipei banquet fit for a queen