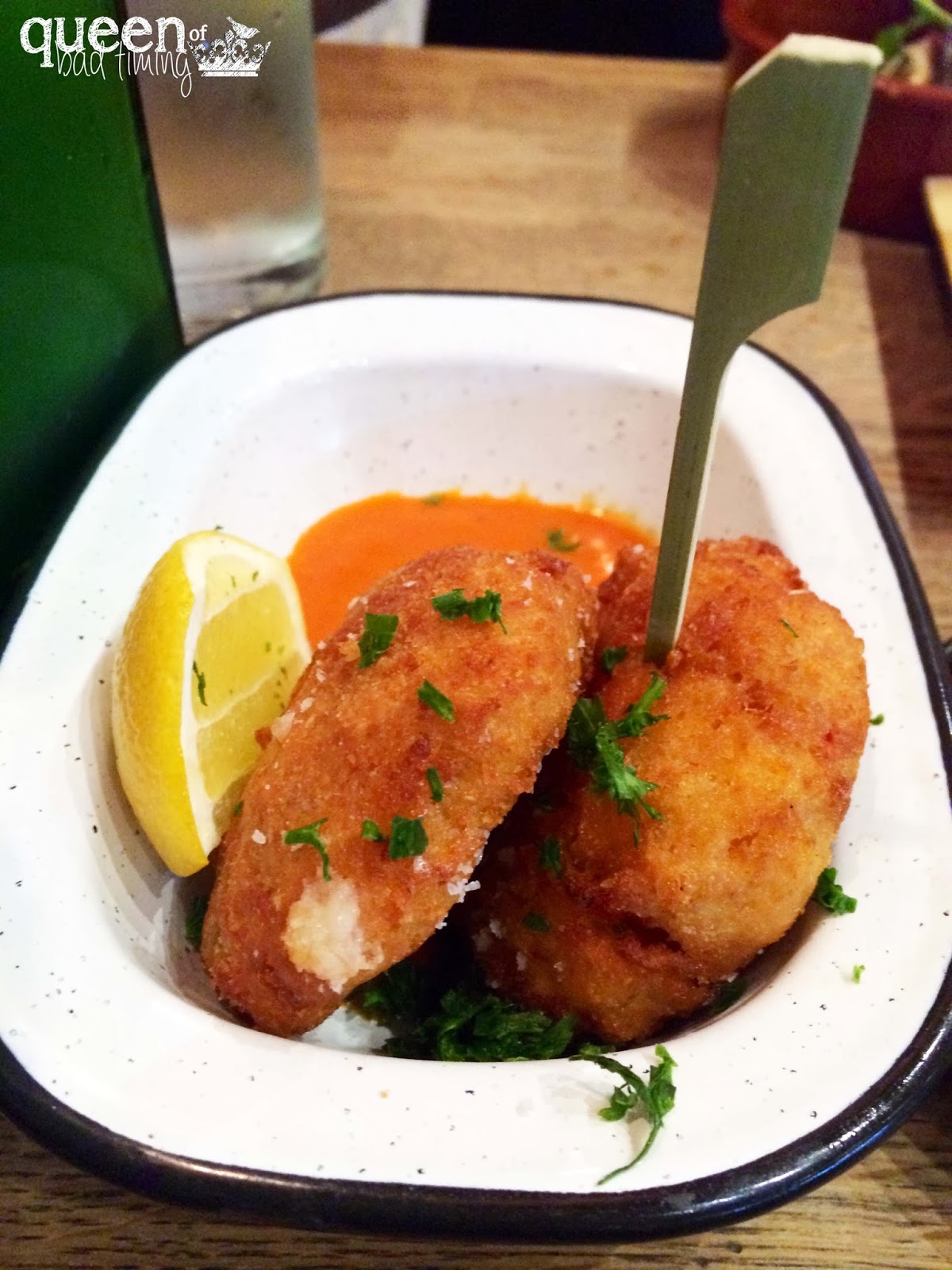 As Rob Broadfield stated in today’s West Australian, share dining is in – and in a big way. Between tapas and share boards popping up all over our great state, there has also emerged a new way of dining – pinchos, or pintxo.
Originating from Spain, this way of revolves around small snacks which are traditionally eaten at bars, and often served with a toothpick or spike skewered in the middle rather than with cutlery.
So far there are a few places in Perth specialising in this way of dining. There’s the Wine Store in Fremantle, Bar Halcyon in the city and also Leederville’s only appropriately titled, Pinchos. 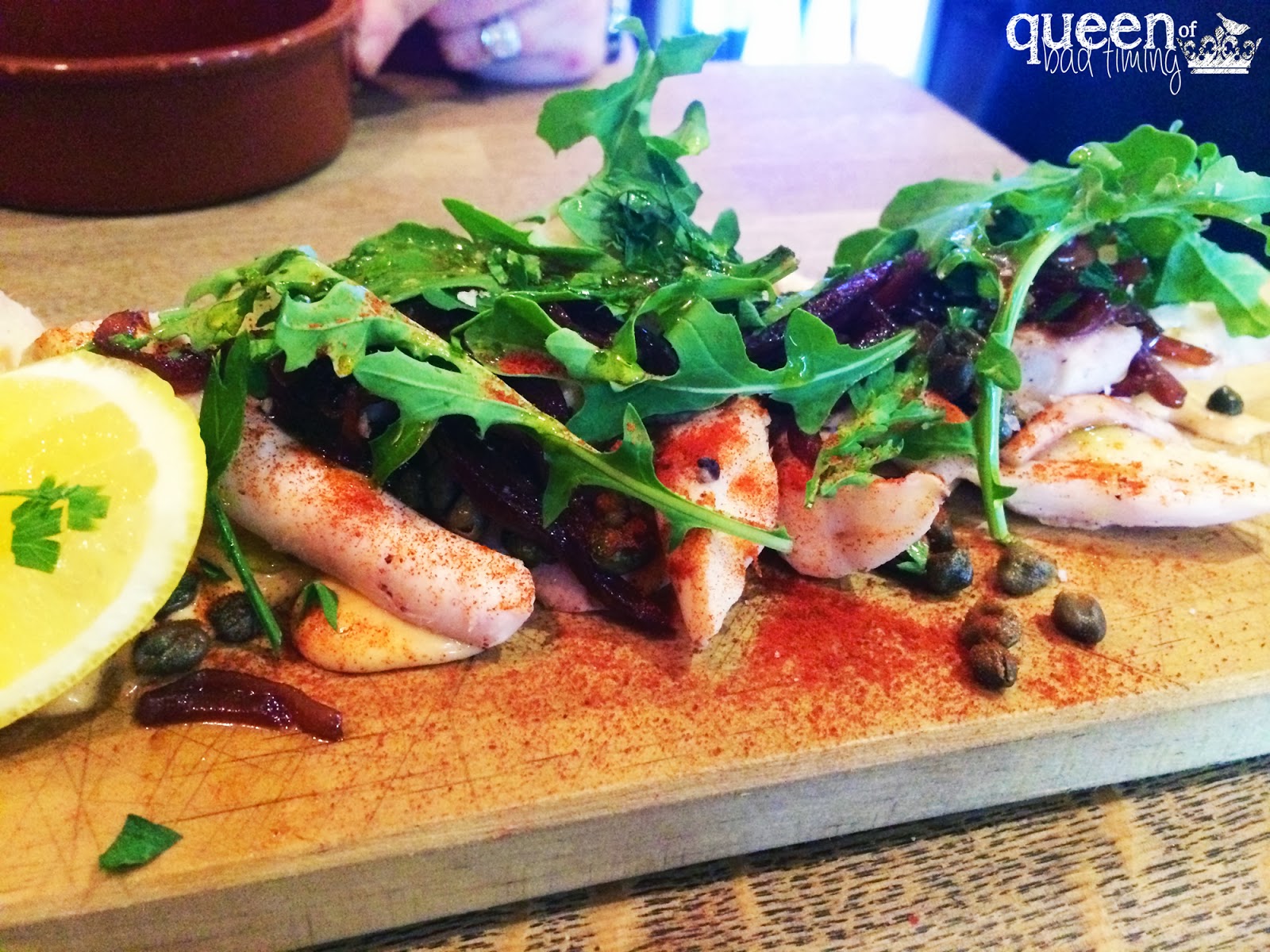 I’m often in Leederville for dining or shopping purposes so I have walked past this establishment many a time. In fact on my weekly tutti frutti run (yes I am addicted), I constantly tell myself that I really need to check it out.

That opportunity sprung on Friday night, where my best friend Carly and I ventured into Leedy for our dinner tradition – take away zambreros and tutti frutti. It’s something we do every fortnight and never tires at all! But on this occasion when we walked past I commented on wanting to try Pinchos and she readily agreed, suggesting then and there. Sold!

The only downfall for me was my unpreparedness, so forgive my iphone snaps as I didn’t have my SLR with me.

The restaurant is small and skinny, with paper menus that you fill in like you would at the likes of a bubble tea store. It’s broken up into pinchos, tapas, salads, desserts and mixed boards which are all reasonably priced and sound amazing.

We dive in once we’re seated, marking up the menu before taking it up the counter. We’ve picked a good spread of dishes and I have to admit I’m surprised by the tally of $53 – it’s so cheap! But the test will be in the taste.

First to come to the table is the Pulpo ($7), which is octopus and potato salad. Spread out on a narrow board I’m pleased to see how vibrant it looks. It’s like a modern day take on pulpo gallego, a Spanish dish where the October is stewed and heavily spiced with paprika. There’s definitely a great use of paprika, but the octopus is cool and just the right level of chewiness associated with this seafood. I love the burst of capers and the jammy caramelised onion slivers that adorn the plate. It’s a delicious and zingy start to our dinner. 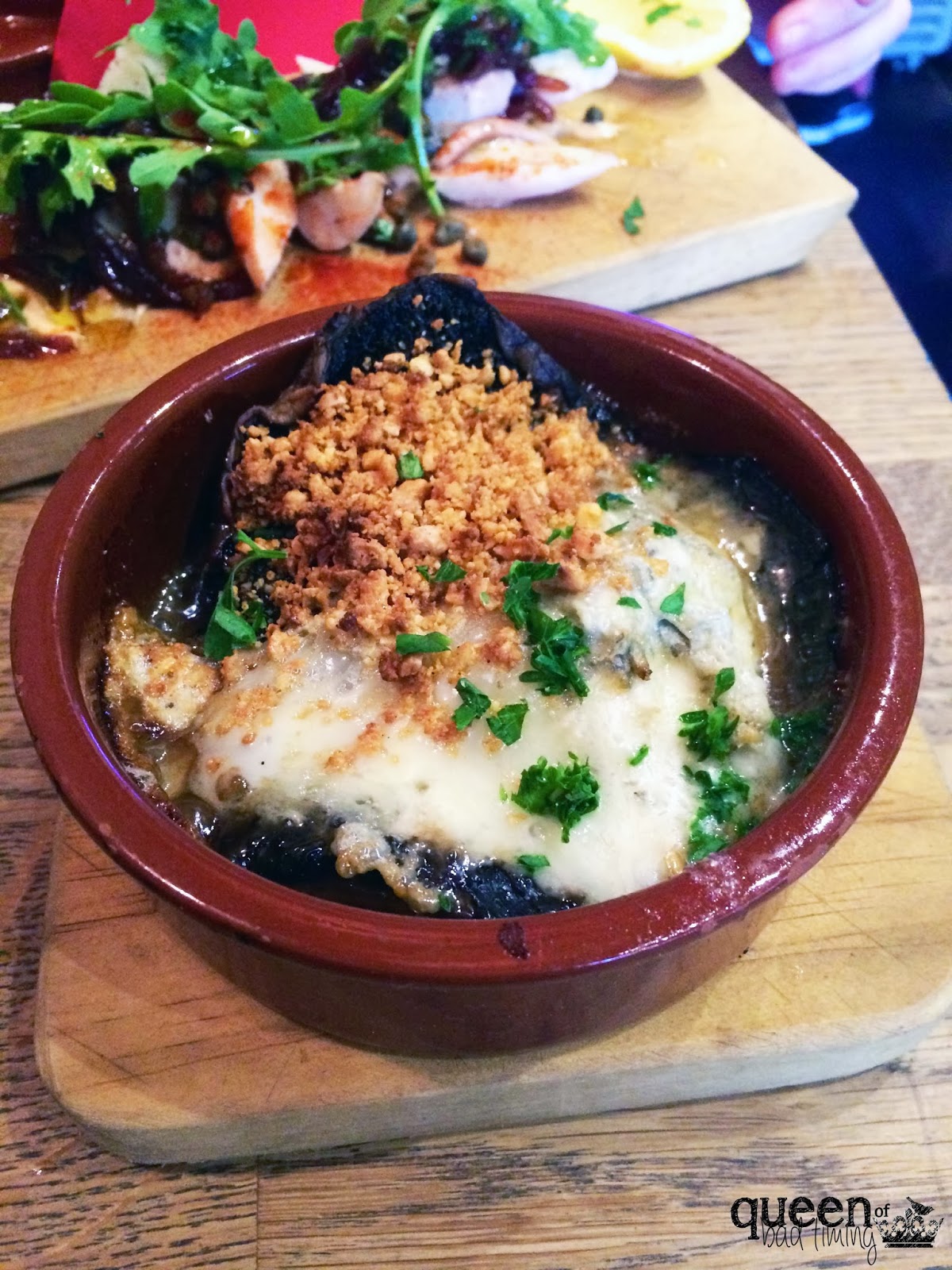 The dish I’d been most excited about trying is the next one to our table – the Champinones con Queso Azul ($9). It’s a large field mushroom, coated in a bubbling layer of blue cheese, cured in PX vinegar and garnished with almond crumbs and parsley.

Carly’s not the biggest mushroom fan but she’s surprised by how much she enjoys this – which is great to hear. It’s meaty without actually containing meat, and the blue cheese is strong but not overpowering. I adore the crumbs on top which give it a great textural diversity as well as an additional flavour in the mix.

These were great – very different to Duende’s paella balls, with a viscous filling and a light but crisp outside. Mojo is a sauce that originally comes from the Canary Islands, and includes olive oil, garlic, paprika and cumin. It adds a nice kick to the paella cakes, especially with the sprinkling of sea salt that’s been scattered over the top. 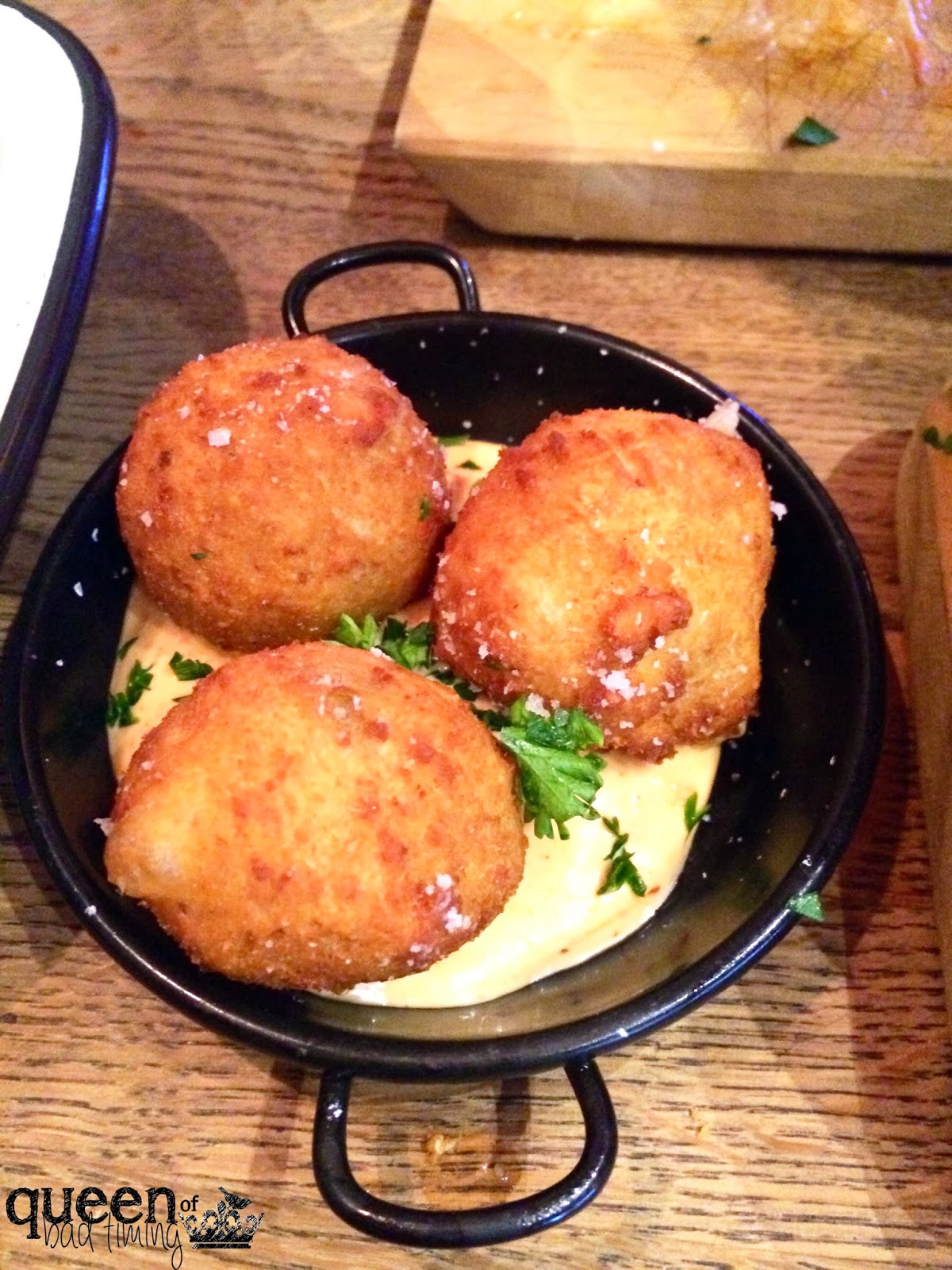 When dining in Spanish cuisine, Croquetas ($8) are a natural choice. Pincho’s version is three round little gems with smoked ham and chicken inside. Yum, yum, yum! One of the best items of the night by far!

The balls are crunchy on the outside and pillowy soft from the mash on the inside. The thick mayonnaise like sauce underneath is creamy and works well with the flavours of the croquettes. I could easily eat another half dozen of these and not even feel slightly guilty, they were just so enjoyable. The smoked ham inside is fantastic – extremely flavoursome and moorish. 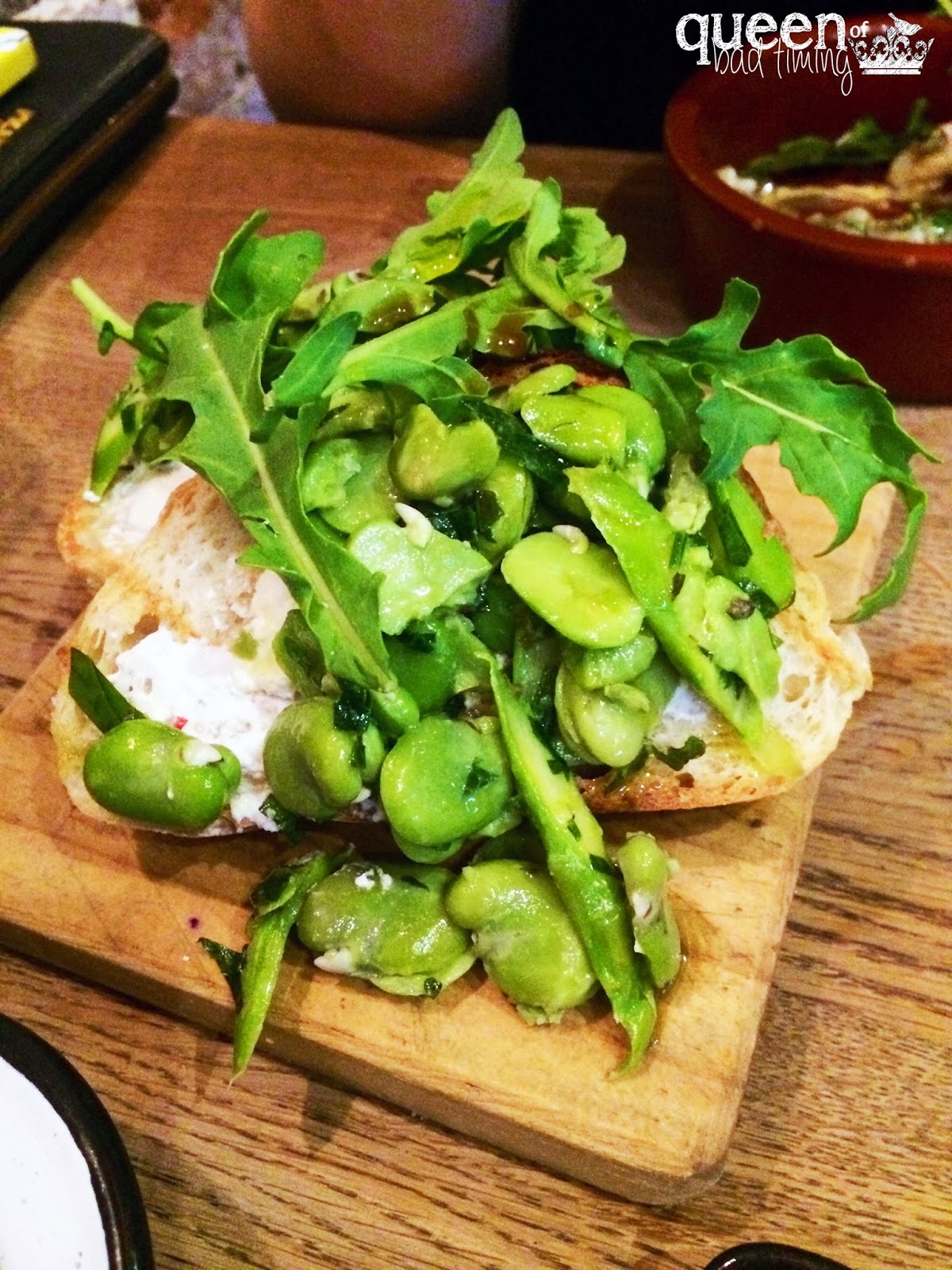 A sea of vibrant green arrives in the form of the Pan con Queso de Cabra y Habas ($7). It’s two slices of grilled bread smothered in goats ricotta, broad beans, asparagus and PX vinegar. Like the croquettes, this was one of my favourites for the night.

It’s an extremely simple but fresh and flavoursome dish. The broad beans are the definite hero, piled high and working in perfect harmony with the mild goats ricotta. 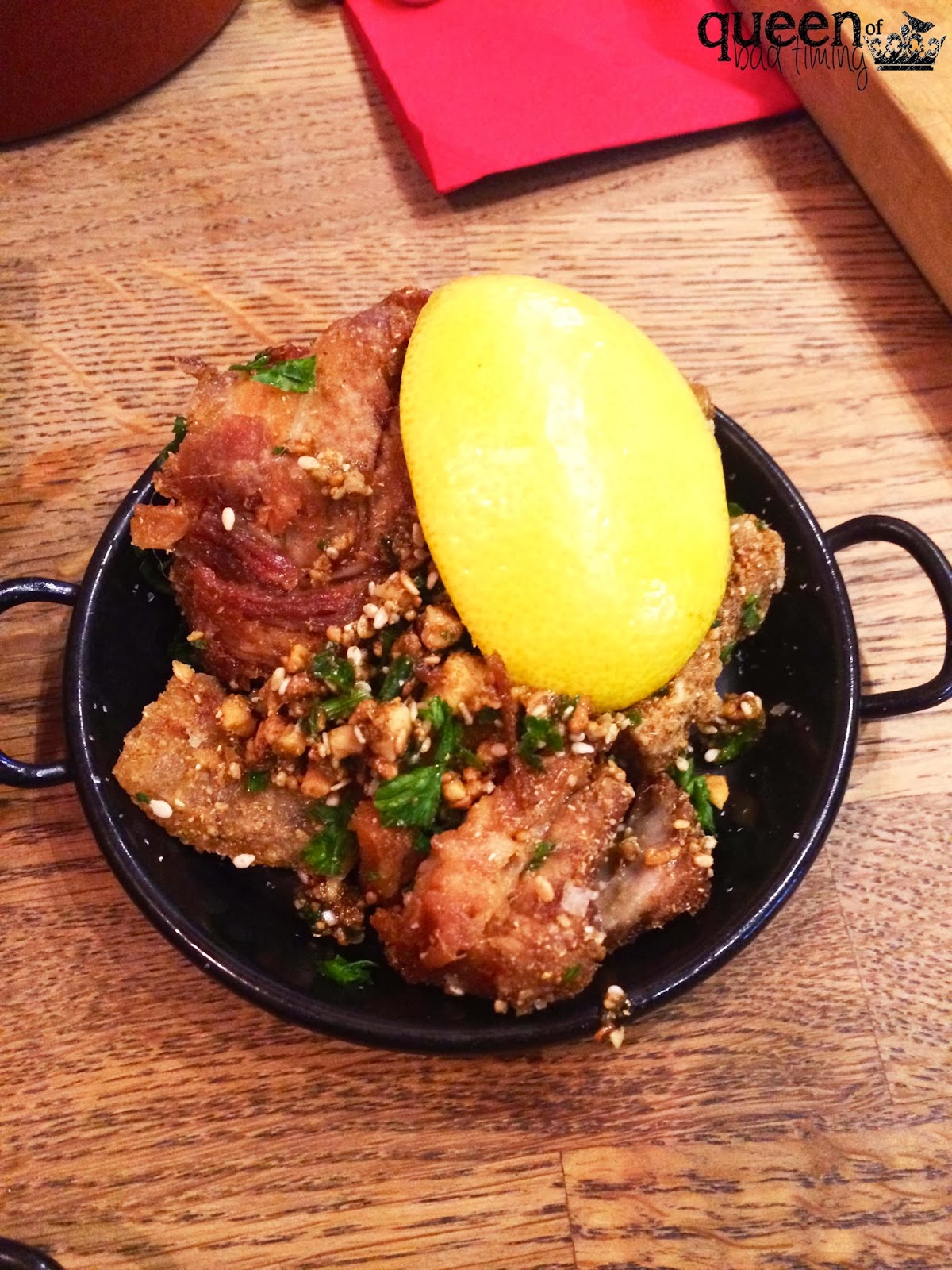 The Chicharrones ($7) are a small but punchy serve of roast pork belly with cumin and lemon. Juicy with only one mouthful finding dry meat in the bowl, and crackling that is fatty and completely guilt inducing. I love the intensity of the spice mixture and the prominence of cumin which is one of my favourite spices period.

I’m fortunate that my mum makes pork belly alot for dinner so I have to admit I do take this protein a little for granted. So while hers is delicious, it is a nice change to try the Spanish style pork rather than our asian style one. 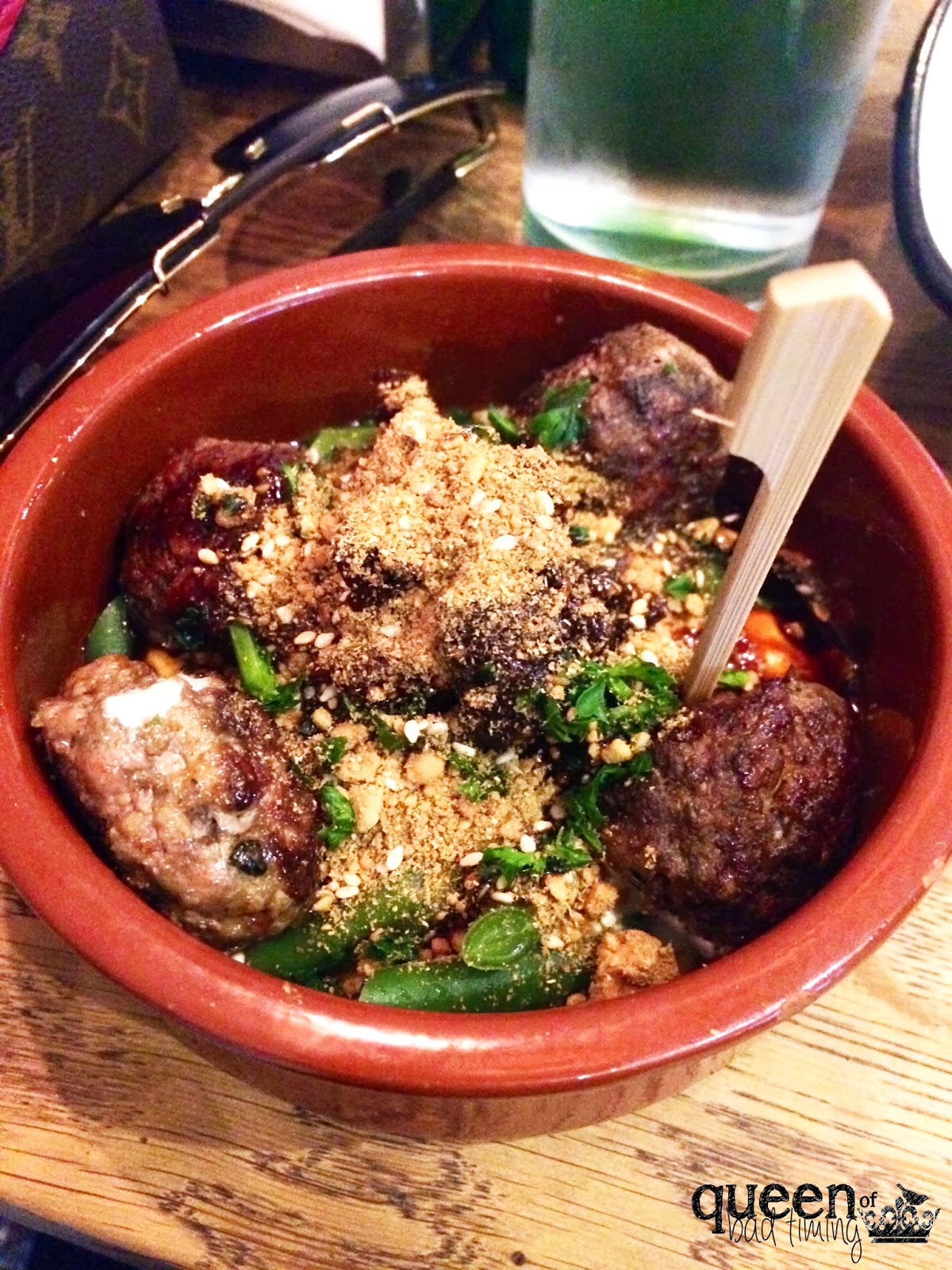 The final dish of the night is the Albondigas de Cordero Arabe ($8) – lamb meatballs with beans, yoghurt, fig and dukkah. This is my kind of dish in terms of ingredients! I adore anything with yoghurt as the sauce and have been having all kinds of cravings for figs as of late.

The lamb meatballs are not as moist as I was hoping for, but nor are they dry so that’s good news! Maybe just a little more fat in the mix for my own personal tastes. But the flavour pairing is spot on – thick Greek style yoghurt that is sweetened by the slices of jammy fig and made even more interesting by the crunch of the spiced dukkah. Definitely a great dish in terms of flavour and diversity to your standard tapas offering.

My first dance with Pinchos was an all round success, which in the up and coming foodie scene of Perth is fantastic news to share. I loved the seeming authenticity of the meal and the affordable pricing associated with it. I’ll be looking forward to going back to try more of what they have to offer.

Counting my blessings from Cantina 663

Trying the famed garlic prawns at The Witches Cauldron