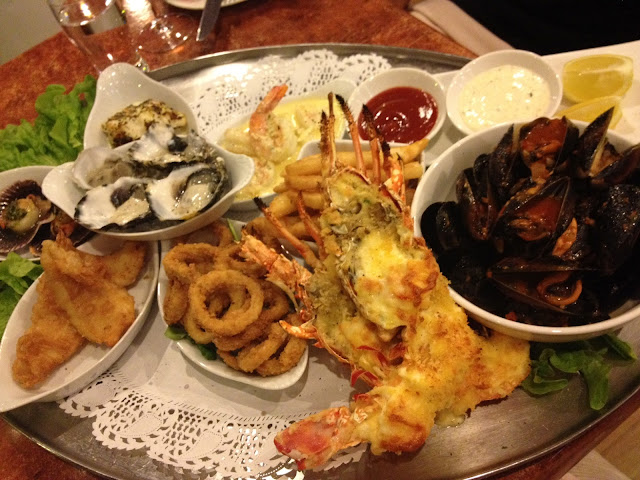 It has been a few years since I’ve been here, but for the past week Jeremy and I have been talking about how our minds (and stomachs) were focused on seafood. As soon as we established this fact, we found ourselves online looking at menus for different places – until it clicked in my mind. Red Cray. That was where it was at.

We started our meal with a glass of wine each, toasting to a nice night out together at a place where I could smell incredibly rich scents misting around us.

Smack in the middle of Belmont on Great Eastern Highway, you would never expect great seafood. But Red Cray is an enigma. Fantastic staff that are attentive and friendly; and food so fresh you’d think that they’d just caught it and put it on your plate.

It didn’t take us long to choose, opting to share the Executive Platter ($115). Yes, a little pricey, but considering the size of it, it’s worth it. No need for entrees or dessert with this dish, it is completely satisfying.

We start off with the pesto scallops which are sitting on their beautiful shell, and have the roe still attached. This place has already been assigned a lot of bonus points for that fact – I hate when restaurants remove that part because I think it tastes great. The scallops are lightly seared and the pesto is flavoursome but not overpowering. It’s a really great start to this dish.

Next we went for the 3 pieces of beer battered fish that are light and flaky. They taste great with the tangy tartare sauce or the garlic butter sauce served with the five prawns in another dish. The prawns are decent in size and cooked just right; cleaned and soaking up the beautifully rich sauce.

The crusted fish, which sits on a creamy bed of mashed potato was calling out to us. It’s lovely and soft, the freshness of the seafood really singing out here.

The salt and pepper squid is snacked on between all the other items – it’s so delicious I actually can’t describe it. The crunch to the batter is amazingly crisp; the squid itself springy and tasty. With the bowl of chunky beer battered chips, it’s like a meal in itself.

The chilli mussels on this platter sit in a generous helping to one side. There’s a great slathering of sauce heaped over the top; with chillis plentiful and the spice level hot enough to leave a little zing in your mouth as an aftertaste. One of my mussels still had the beard on it, but luckily I managed to spot it before putting it in my mouth.

The four natural oysters on the place tasted like the sea itself. They were freshly shucked and had the kind of creamy texture that you’d expect in such an item. A squeeze of lemon juice and they went down a treat.

The final item on our dish (the item that separates the Executive Platter from the standard Red Cray platter – $75) was the full mornay crayfish. It’s a large crayfish, cut in half and cooked in a truly incredibly thick bechamel sauce. This was the highlight of the meal for me and Jeremy both. It had a phenomenal wow factor that made the entire night one of the best we’d had in a long time. The crayfish is topped with cheddar cheese and the meat is easily pulled away from the shell. I can’t say enough good things about this element of the platter.

It was a lot of food. But somehow, probably driven by greed, we got there. I even have the proof: 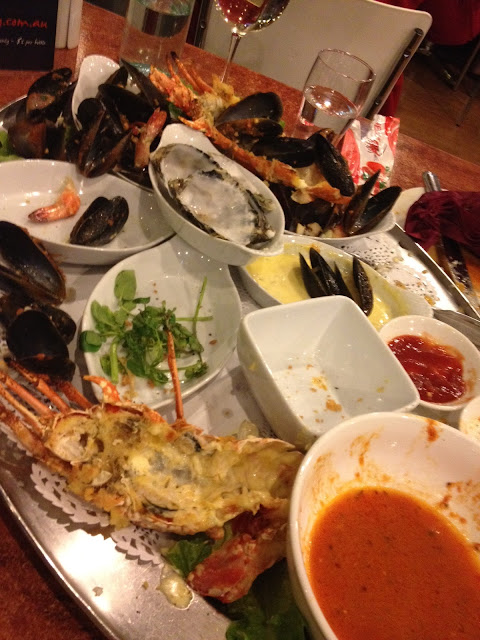 Eating our way through the port city to The Modern Eatery, Fremantle

Feasting on the new menu at Five Bar