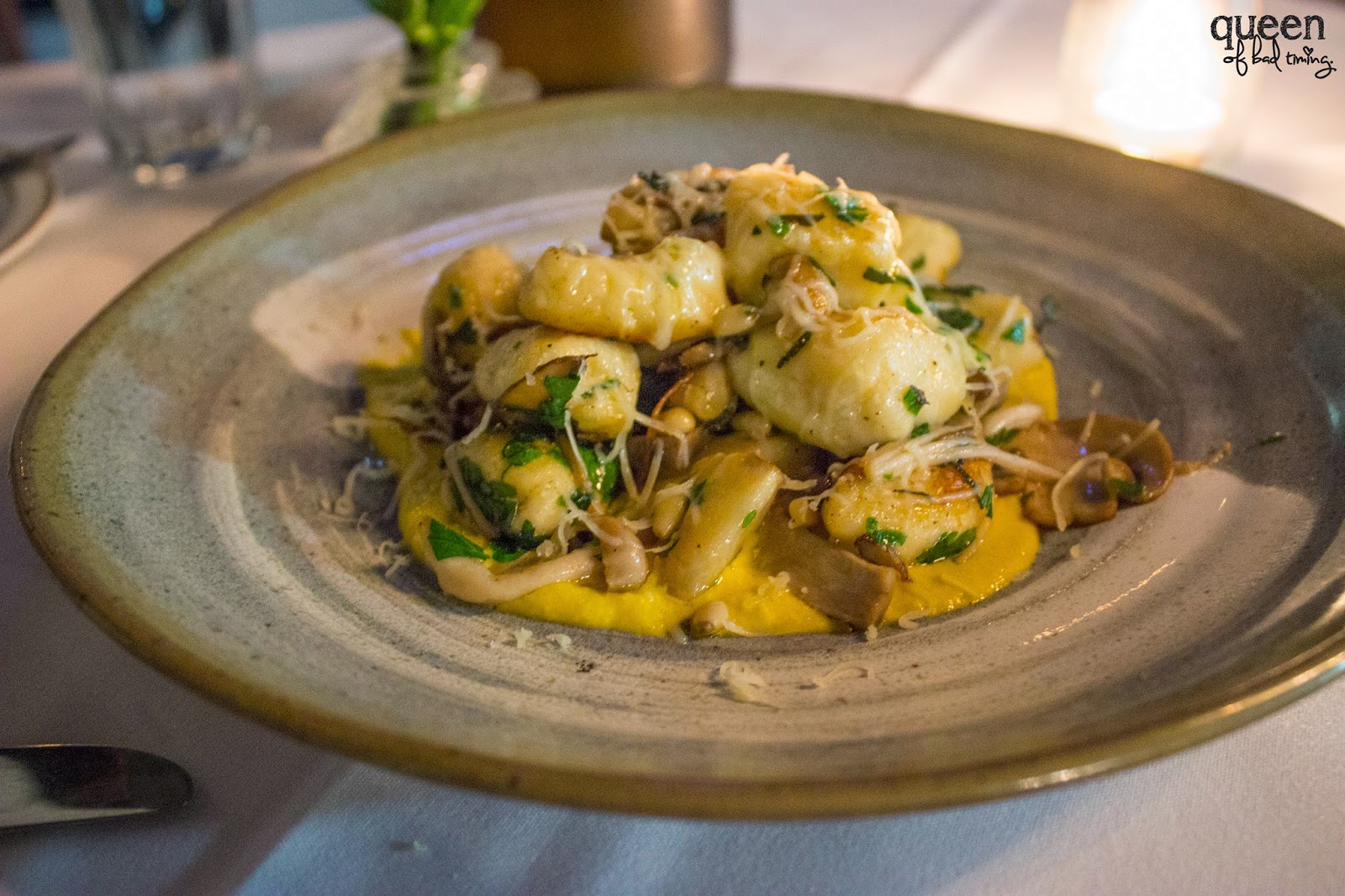 Low lights. Warm interior. Great ambiance. And a neighbourhood vibe. West End Deli is intimate, sweet and an unsuspectingly blend of modern and rustic on the inside. I’ve only been for breakfast once before, and never for dinner – though I’ve heard good things. I mean what do you expect when you have the former head chef of Duende, Il Lido and Verve heading up the kitchen!
My breakfast at West End Deli was a mixed bag. My crepes were tasty but tiny, Jeremy’s omelette generous but the crab topping sparse. Flavour wise we’d really enjoyed it but it hadn’t quite made the impact that other breakfast places at the same time had. And then time flew by and I realised that while I had fully intended to go back and try it again, I still hadn’t made it down.
After dropping Jeremy off at work one night, I invited my mum out for dinner. Seeing a vibrant spring dish on West End Deli’s Instagram page, I was really keen to revisit this cute little North Perth cafe and experience their dinner menu. Knowing the boy was only doing a short volunteer shift I knew I needed to stay close by so it was the perfect activity rather than go home. It was a bit of a risk since we didn’t have a booking and it was a Friday night, but we managed to get in!
Our waiter mentioned that they’d been having a bit of a slow week which I can imagine would be hard on them – it’s not in walking distance to any other popular eating spots so people might forget it’s there. They probably don’t get a high volume of walk-ins compared to other restaurants. 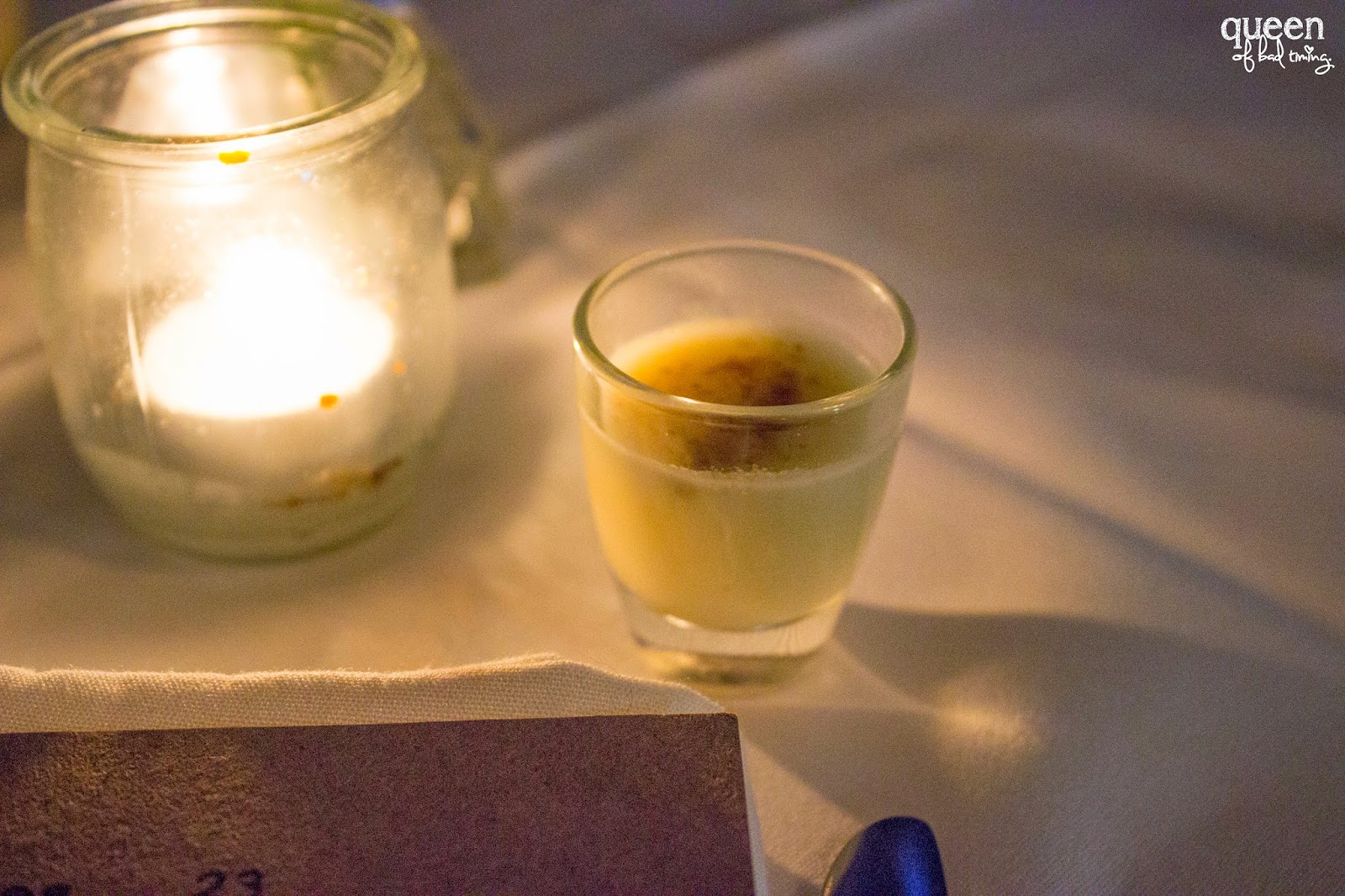 Immediately as we sit down we’re presented with menus, water and not long after – a complimentary amuse bouche. I think it’s such a great touch – people love freebies and you can always work the cost of doing this into the menu pricing. On this evening it was a jerusalem artichoke soup with some salty squares of speck at the bottom.

The soup is crazy. And by crazy I mean really, really good. My first taste of jerusalem artichoke soup was earlier this year at the Truffle Kerfuffle Launch where I quickly became a little obsessed. West End Deli’s version is creamy and well seasoned, with a decadence and very moorish quality. Both mum and I could have happily polished off a few more of these! If only it was a menu item I would have definitely ordered it. Once we’ve placed our orders we’re brought out slices of fresh baguette and butter to enjoy. Again, another great touch! Especially as mum was just saying how she missed the days of complimentary bread – it’s like they read her mind. Throughout the night I have to say I was really pleased by the attentive and dedicated service.

Excuse the poorly lit photos, the restaurant is mainly lit by candlelight to create a moody intimate setting which I enjoy aesthetically but makes food blogging a little tricky! Hopefully you can see just how soft and fluffy that bread was. If I could change one thing it would just be for the butter to be softened – it was too hard to spread properly though the taste was spot on. Salty and creamy and ticking all the boxes. 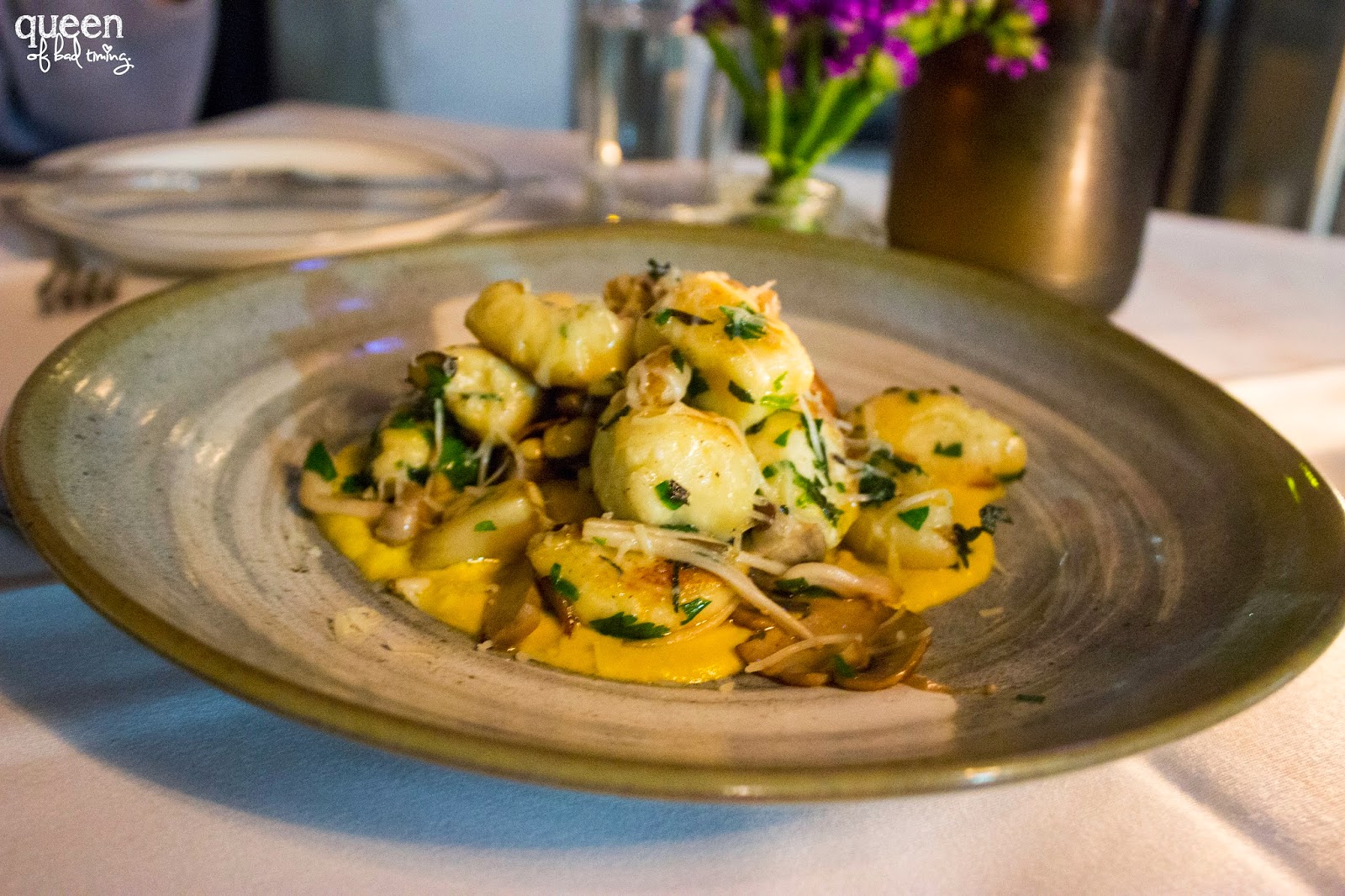 The menu at West End Deli is really simple which I like. It’s four different entree choices priced at $23.00 each and another four different mains priced at $33.00. Mum and I each pick a main but we decide to share an entree between the two of us.

For us both, this was the dish of the night. Absolutely a winner and worth returning for. 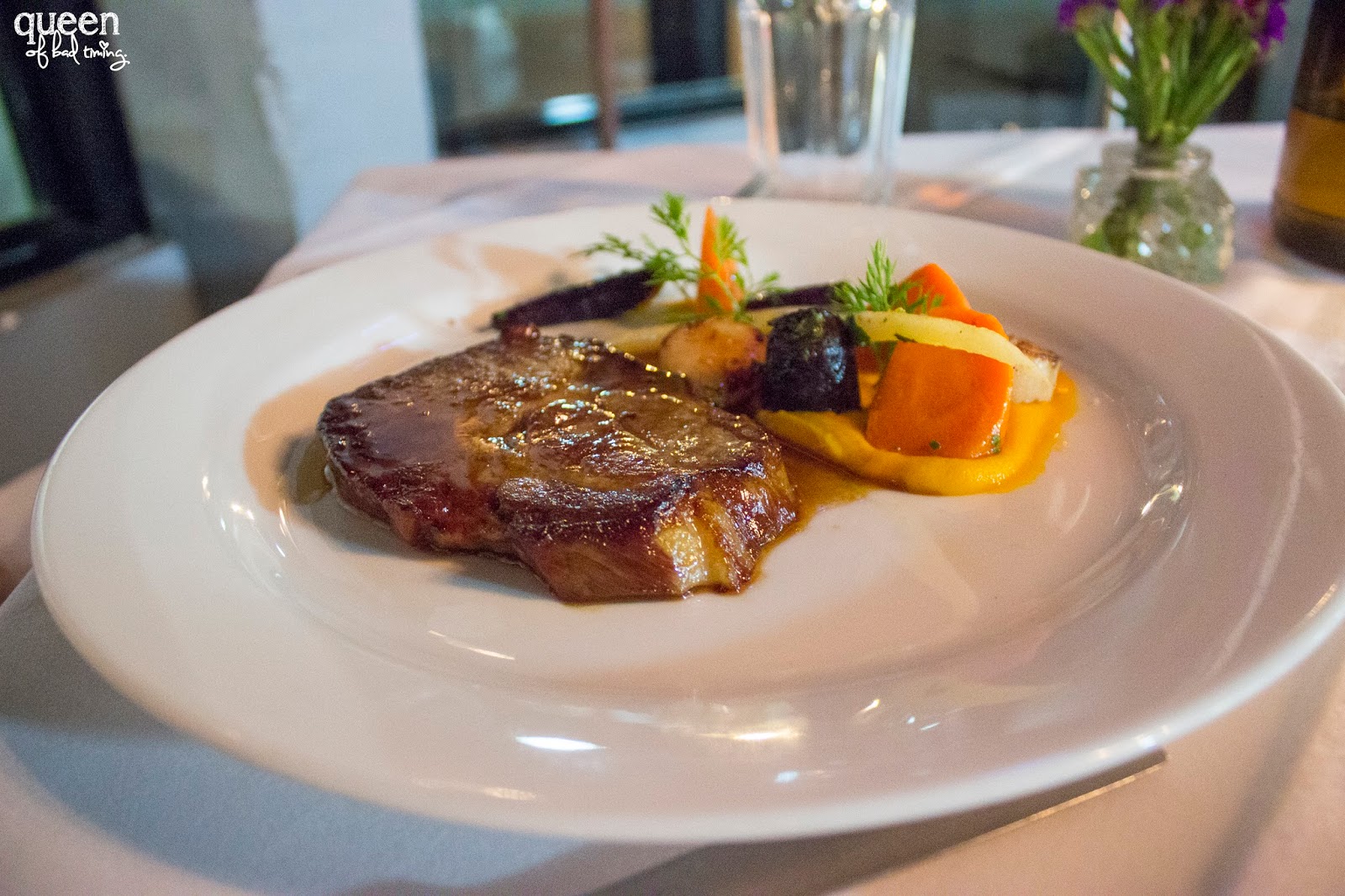 Not long after our gnocchi plate is cleared our mains come out to the table. The restaurant is starting to become busier and there’s some amazing aromas circulating the space. Did I mention this place is BYO? It’s great to see people coming in from the cold night with bottles of wine in their hands to enjoy with their food. Wish we’d known that before going down!
Mum’s order of the slow cooked pork neck, heirloom carrots, seared scallop and ginger jus looks very simple but smells great. It’s a really different style dish than her normal taste but we both enjoy it. The pork neck is tender and sticky, melting in your mouth. Mum finds the ginger jus a little too sweet for her liking but we both agree that the carrot puree is absolutely spot on. It’s so tempting I actually want to just run my finger across the plate to wipe up every last drop.
Her root vegetables are a little under which I’m not sure if it’s intentional or not. It offers some crunch and texture, but having the vegetables somewhere between cooked and raw is a little confusing for us. 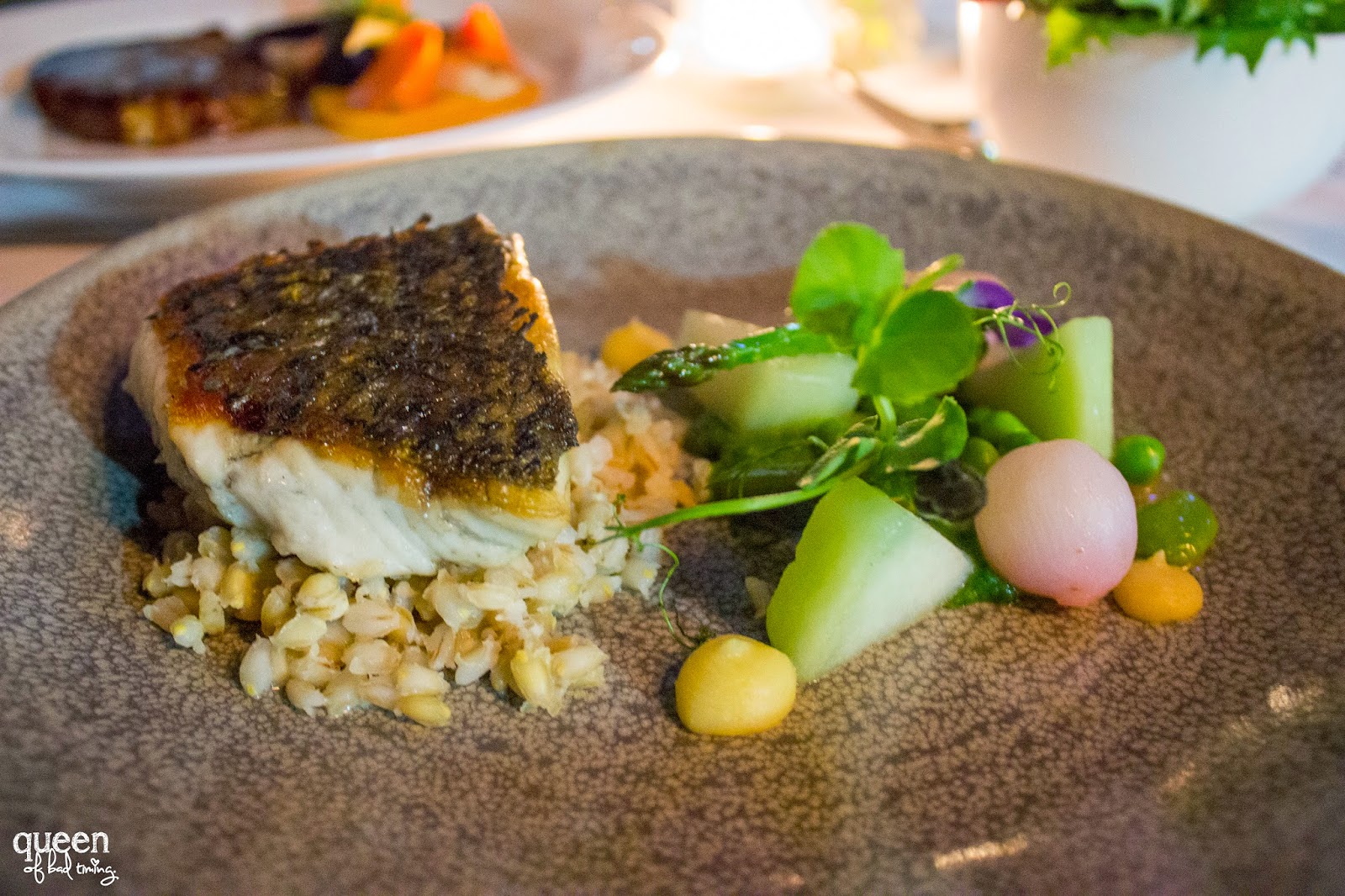 My barramundi main comes out atop a bed of pearl barley risotto. There’s a pea puree, with some spring vegetables and little dots of a strong lemon sauce that reminds me a little of a curd.
I love the barramundi! It’s completely been respected with a crisp, shattering skin layer and the softest, flakiest flesh. It’s well seasoned and just a delight to eat. Simple but well executed. The pearl barley risotto underneath is nutty and a perfect accompaniment to the fish and vegetables, tying it all together. I love seasonal produce so having vegetables like peas, asparagus, broad beans and radishes really brings the dish home – though once again my root vegetables are on the raw side. I really enjoy it though and feel like the whole dish is vibrant and fresh.
We also share a side of leafy greens ($5.00) which are dressed simply with olive oil and balsamic vinegar. They’re fresh and satisfying, just the thing I like to eat on the side of my dinner. I especially enjoy the peppery rocket and crunchy of the fresh leaves however I could have done without parsley – I’m not it’s biggest fan! But that’s a very personal preference as I know my mum was happy to eat those pieces. 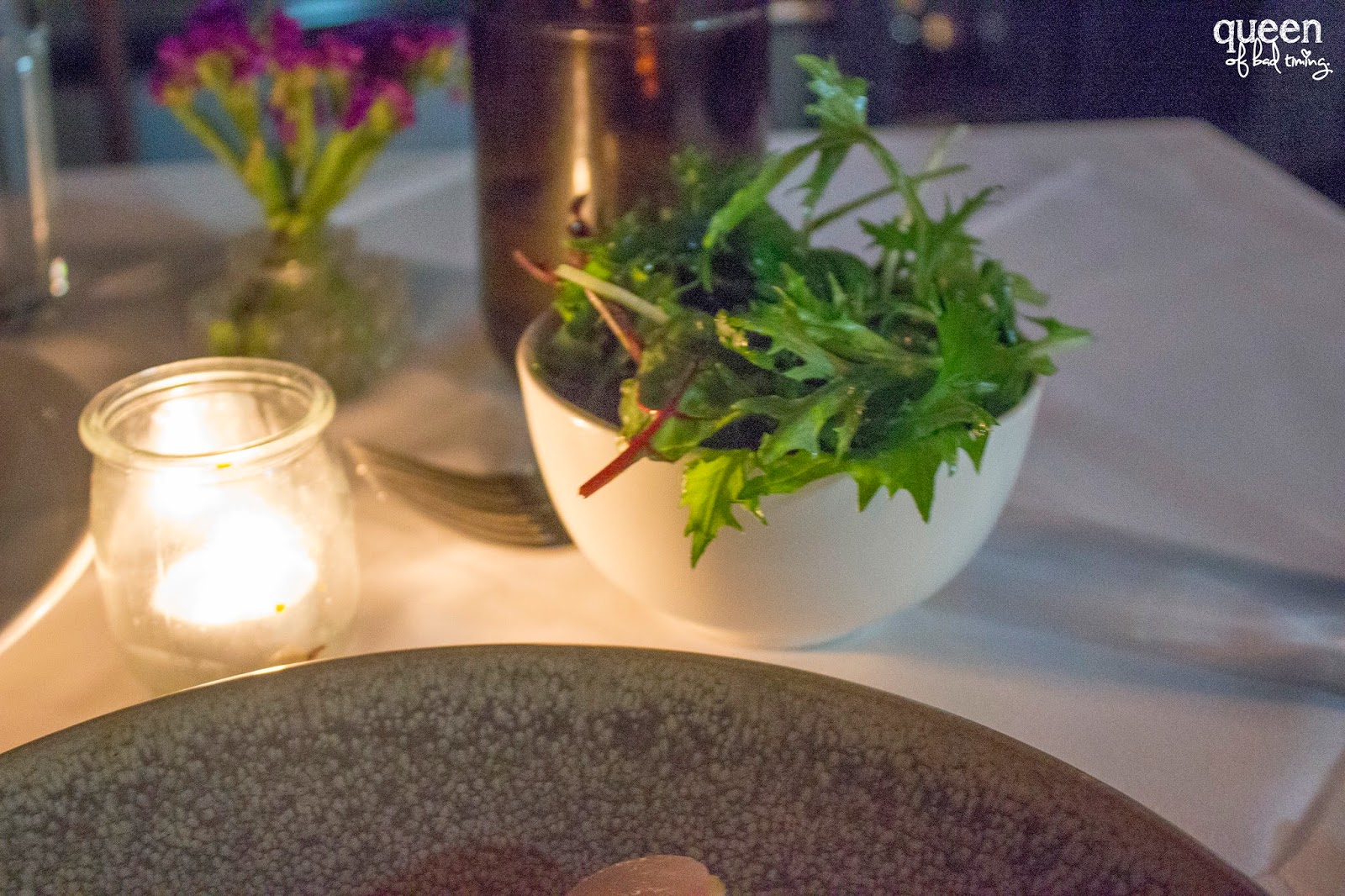 Finishing our mains I contemplate whether to order dessert. They’re on the expensive side at $18.00 each but there’s some really interesting sounding stuff on there. Like wholemeal or thyme ice-cream. Those intricate and diverse flavour profiles that usually lure me in. On this occasion though we decide to pass as I’m actually quite sated and am happy to stop there.

I’m really glad I returned to West End Deli after all this time. Their menu was interesting and seasonal, with enough of a selection to suit most tastes. I think I will definitely need to go back soon for breakfast but until that time I’ll be dreaming of that incredible ricotta gnocchi and letting my obsession grow even more.

A breakfast with Gusto

A taste of Sugar & Nice