The rise of a good Bread in Common 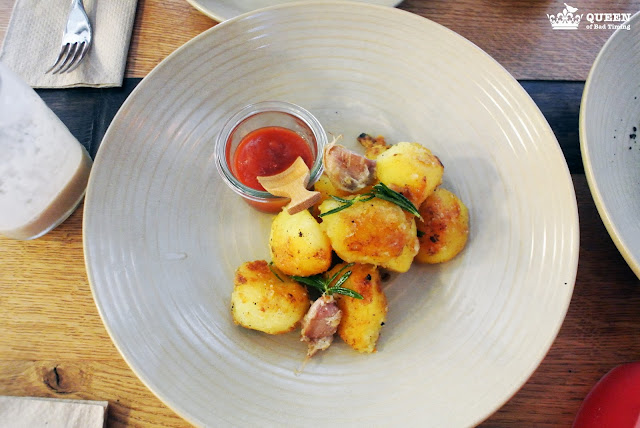 After a great weekend with my boy of eating, relaxing and treating him to a great birthday, we were joyous in our decision to book Monday as a day of annual leave each. This kind of spring weather is my favourite, with warm sunshine and cool breeze. And I know it won’t be around for long, we’ve been making a special effort to be out and about to make the most of it while it lasts. 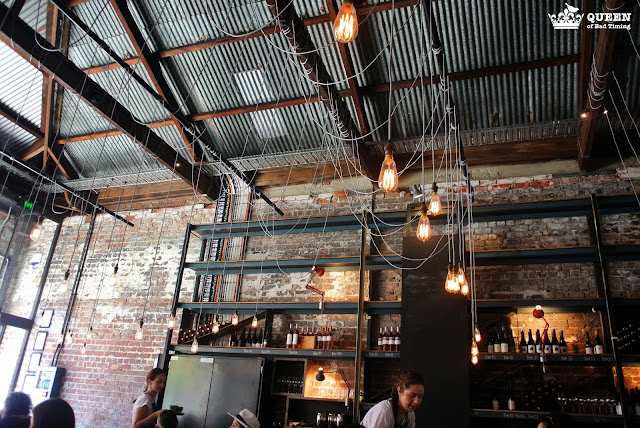 Since we live north of the river, breakfast/brunch in Fremantle can often be a bit difficult to achieve without getting up super early or being willing to wait in line for a longgggg time. So having a day off meant that we could indulge in a trip to see the Freo doctor, and also sample the fare at one of the new hotspots springing up south of the river.

We had three places on our wishlist – Bread in Common, Bib & Tucker and Public & Co. We opted for the first after reading some stellar blog posts on the place. 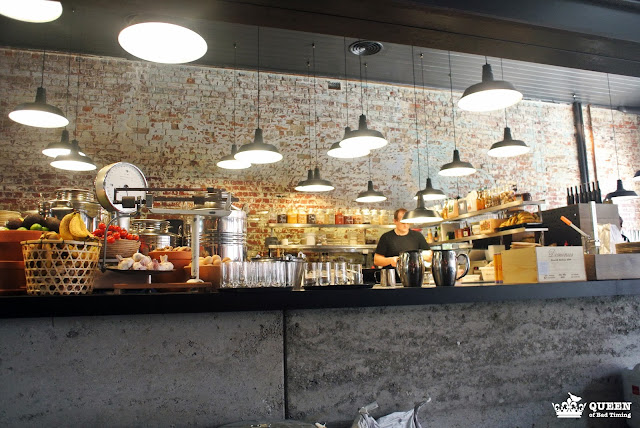 Bread in Common opens at 10am, and we arrived maybe fifteen minutes later. Even though it’s a weekday, it’s already busy with tables of happy diners and plates bustling from the kitchen. But thankfully we manage to snag a spot at one of the communal dining tables, a pretty vase of native plants decorating our space.

I love the warehousey feel of this place – it’s so open and airy; with gorgeous lights strung from the ceiling to create a dim but funky aesthetic. You can see into the kitchen, and I’m impressed by the big bowls of fresh produce and oversized spice jars. 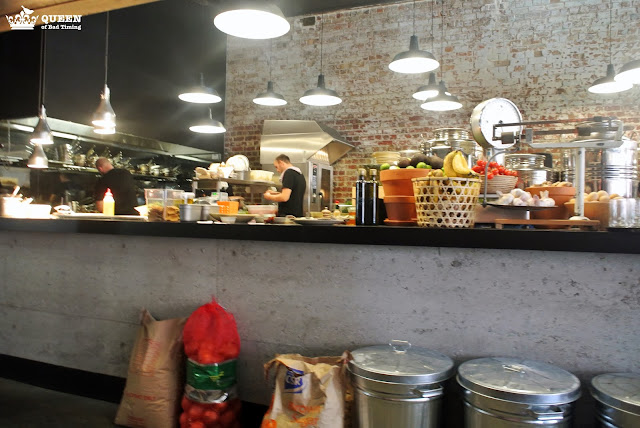 The philosophy for this place seems to revolve all around bread, as the name would suggest. There’s a section of the menu dedicated to feeding diners bread (at a very well priced $2 each), plus a variety of different spreads and dips to enjoy the house baked concoctions. 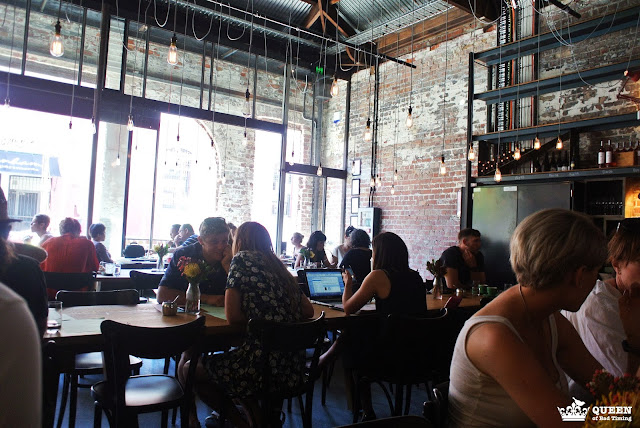 We start off our morning with a drink each, Jeremy choosing a Banana, Honey, Yoghurt & Chia Seed Smoothie ($11 I think…). I opt for a similarly priced Coconut Water, Watermelon, Elderflower & Agave Syrup Smoothie. 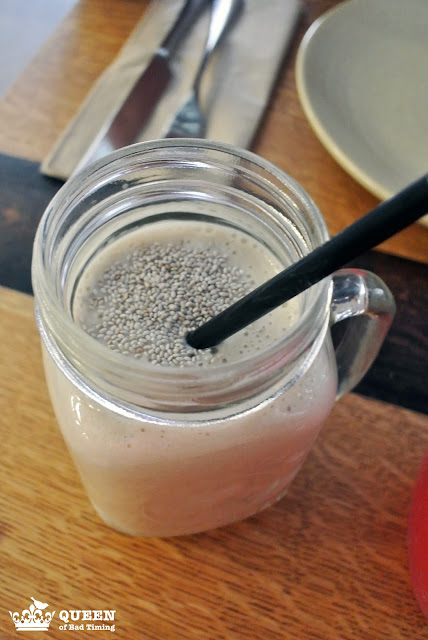 The come out to our table in the most gorgeous mason jar cups which I’ve actually been eying online on Etsy! Great presentation and a nice big serving to enjoy while we wait for our food to arrive. 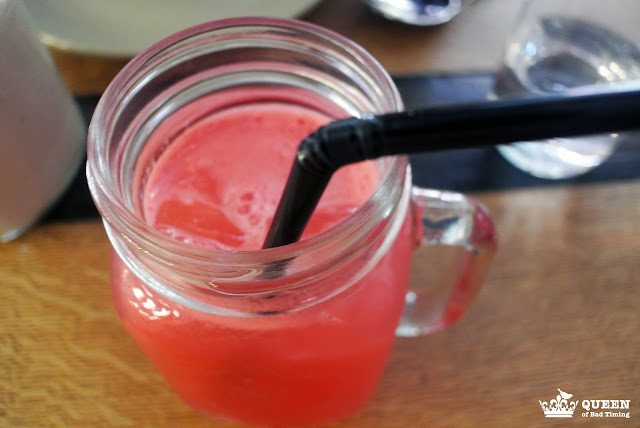 Jeremy’s banana smoothie is my favourite of the two. It’s chocked full of that banana flavour, with little crunches whenever you suck up a chia seed through the straw. The use of honey must have been quite light though as there’s not much flavour of it in the drink.

I really like it since it’s not a drink I would normally order myself, but since Jeremy is a big fan of yoghurt smoothies, he’s not convinced by this one. He thinks there needs more intense flavours (it’s too banana heavy) and more chia seeds since there’s maybe half a teaspoon. I laugh when he tells me this and playfully tease him that he should be the food blogger, not me! 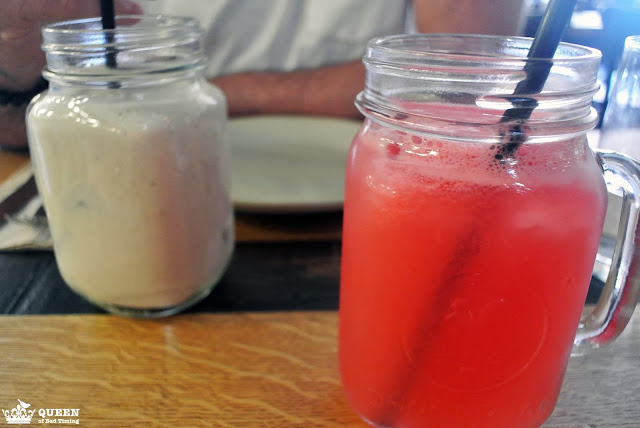 My coconut smoothie is so refreshing and perfect for a warm day. While it’s pink in colour from the addition of watermelon, the coconut water is definitely the dominant flavour – sweetened by the agave. I really enjoy the lightness of the beverage, and it works well with the food that soon follows. 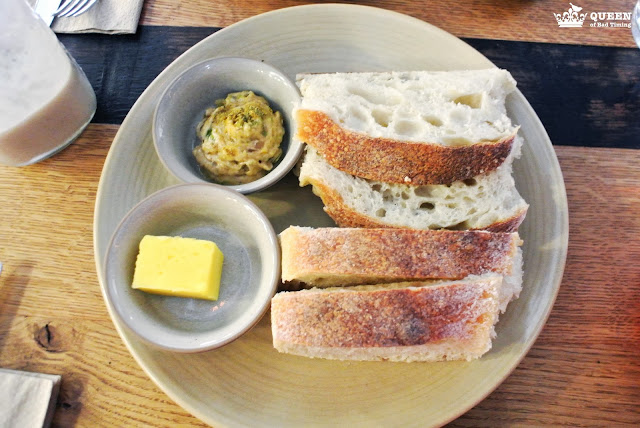 They say when in Rome, do as the Romans do. Well when in Bread in Common, you should definitely eat bread. At least that’s what Jeremy and I decided to do, ordering a serve each ($2 per person gets you 2 slices each of the common loaf, traditional village bread.

We order from the oil & spreads section a serving of the house churned butter (50 cents) and the whipped pork, pistachio and fennel spread ($4). 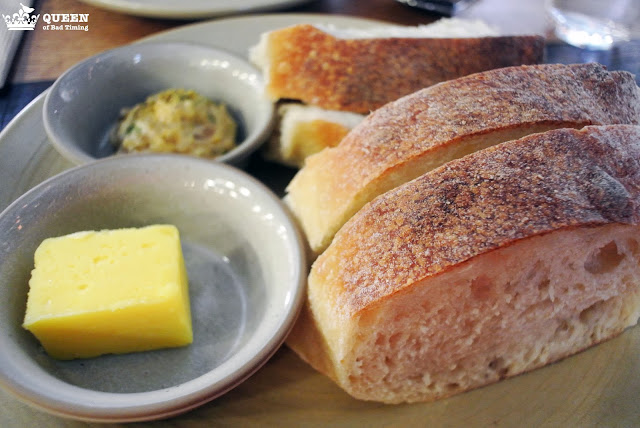 Including the drinks and the food still to come, the bread was definitely the highlight of our meal at Bread in Common. The bread itself is light and airy inside, crisp on the outside along the crust. There’s something so comforting in a freshly baked loaf, and there was no doubt in my mind that this one had been prepared earlier in the day.

As a massive butter addict, I was pretty confident I would love the house offering. And I wasn’t wrong – it’s creamy, salty and rich. It spreads (like butter) with ease, coating the bread like a second skin. It is a damn good butter!

The whipped pork, pistachio and fennel spread is awesome and from the first bite I know this is something worth returning for. It’s well seasoned and flavoursome, offering a variety of textures with each bite. I really enjoy every bite of this spread. 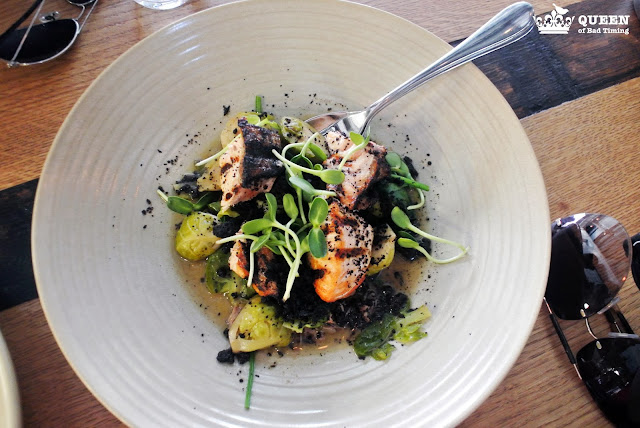 When we’ve nearly finished our bread, our two share plates we’ve ordered arrived. First up we have the Chargrilled Salmon with Brussels Sprouts and Black Pudding ($28). It looks vibrant and beautiful. 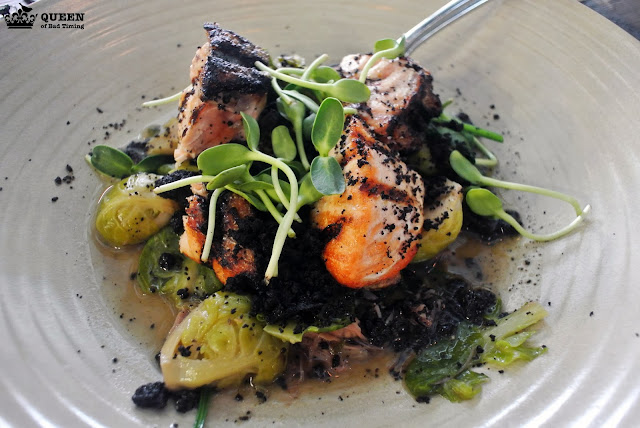 The salmon is perfectly pink in the centre – the flesh flaking away with ease as I prod it with my fork. For the most part I really enjoy it, but I do find that in a couple places where it’s been on the grill, the char is a little too intense for my personal tastes and leaves a burnt aftertaste.

The brussels sprouts are juicy but firm, a nice accompaniment to the salmon. I love the black pudding addition which is a scattering of crumbs that almost look like ash – they’re sweet, meaty and flavoursome. I would have liked more, but that’s just because I love black pudding – and there were some bites that didn’t have any at all.

For our second share dish, Jeremy chooses the Duck Fat Roast Potatoes with Rosemary & Ketchup ($11). They come to the table golden brown and looking absolutely tantalising in their crisp skin and flakes of salt. I can’t wait to dive in! 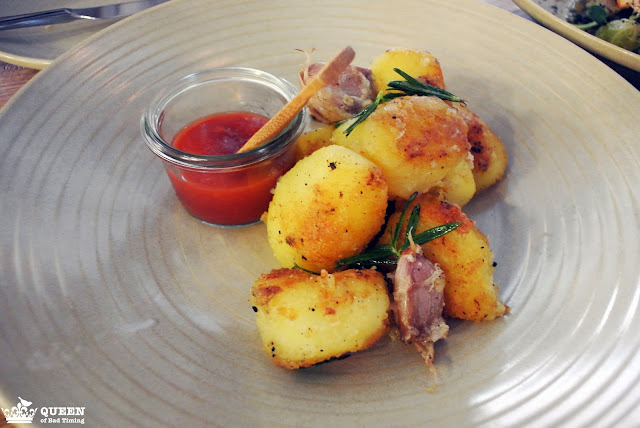 The inside of the potatoes is soft and fluffy, and oh so moorish. I love the outside crust that has formed from using rich duck fat for frying, and the cute little jar of ketchup on side. It’s house made and slightly vinegary, which I really like – it’s sour but sweet at the same time. And of course delicious because potatoes and ketchup go hand in hand!

I wish we hadn’t been as full as we were by the time we finish the potatoes because I would have so badly liked to try the Asparagus, Broad Beans, Peas, Pecorino and Egg dish on the menu. I spied a diner nearby feasting on it and it looked incredible! Damn, but there’s always next time.

I have to say, I did really like Bread in Common but I think that the real star here is their bread and not so much their other dishes, which were nice enough. I’m hoping to go back and try some other dishes soon, and of course indulge in some bread and butter once again.

A little ray of happiness at Tuck Shop

A Thai explosion of flavour at Nunam