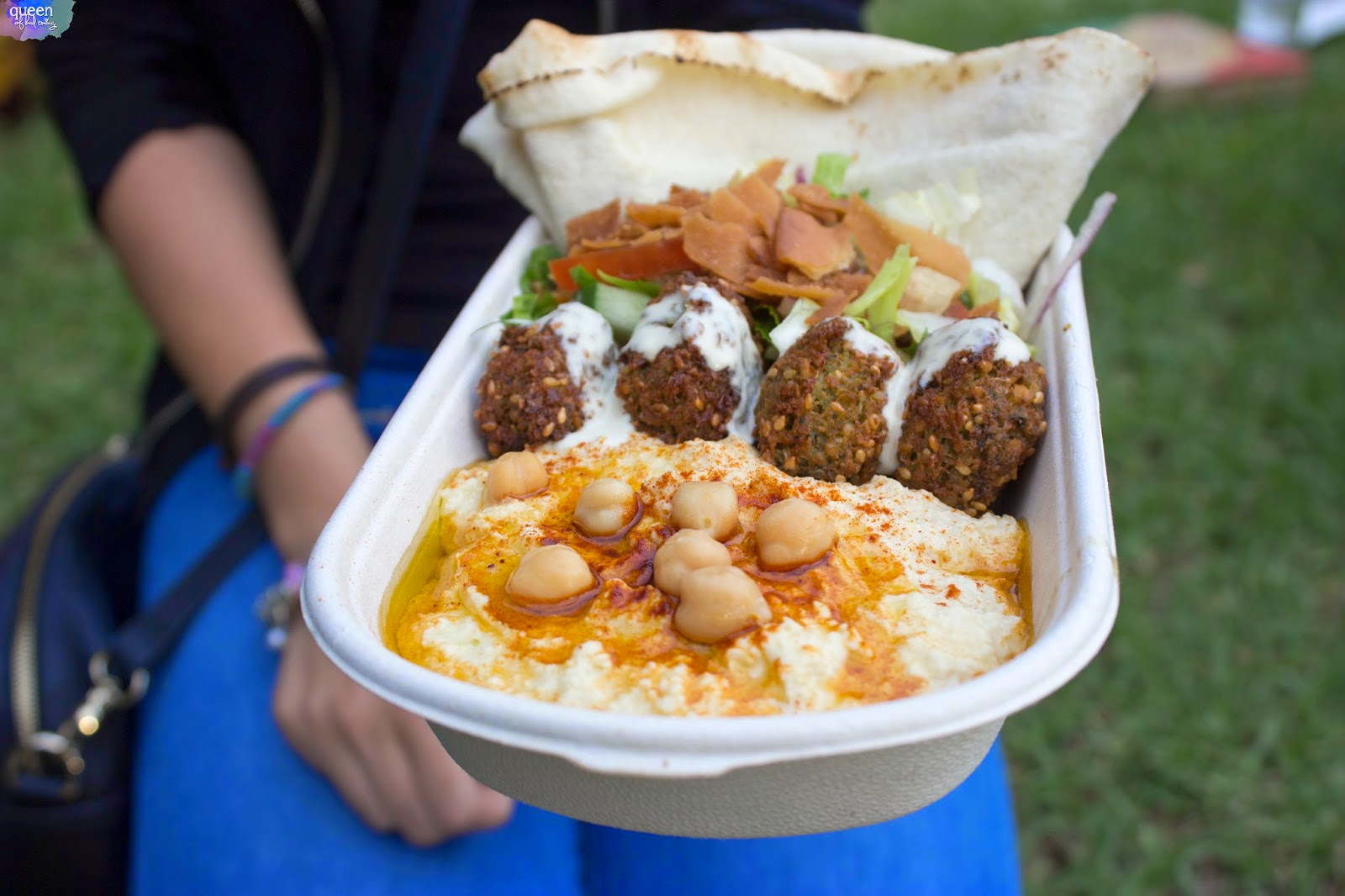 Summer is just the best time of year in Perth when it comes to food. Don’t get me wrong, I do love winter with the opportunity to rug up, slip into boots and indulge in comforting dishes, but summer has such a charm to it. And a big part of that, is the prevalence of hawker markets throughout our great city from day to night, weekday to weekend.
I (obviously) enjoy fine dining, but there’s something immensely appealing about street food to me. I love going to markets, flitting between stalls with precariously balanced paper plates, steam rising from a freshly made empanada, corn rolling around, sauces slipping into one another. Oh yes, I love markets.
On a recent low key weekend I actually had the opportunity to visit the Mt Hawthorn (Friday night) and Mayland (Saturday night) hawker markets. It all started with an email from Kait and Ziad, the owners of The Hummus Club… 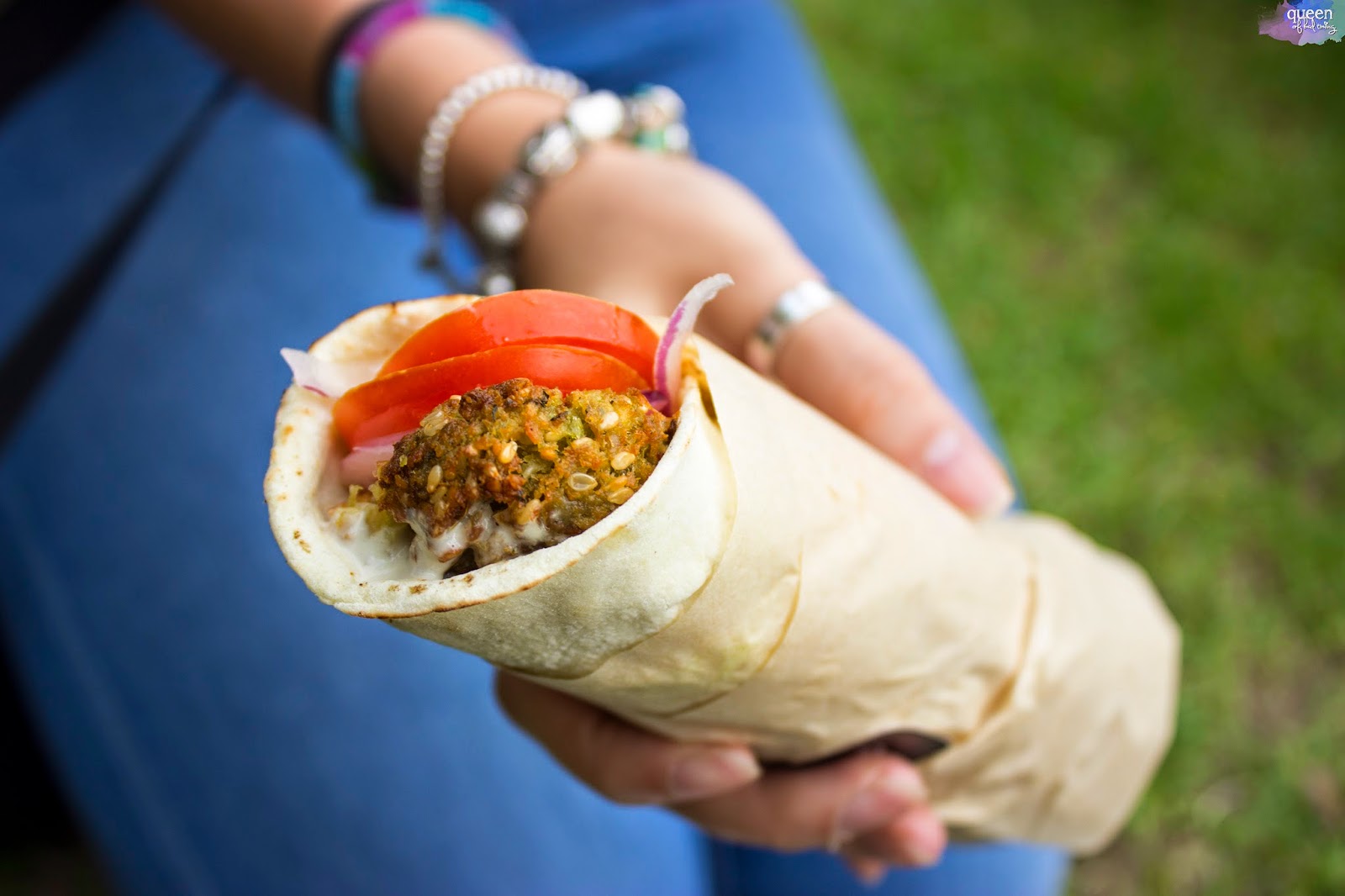 Being obsessed with food is one thing (and an expensive habit quite often), but I also lurrrrve dishes from different countries, regions, influences etc. I am a spice nut, chilli fiend and all round flavour whore. For me, food deeply immersed in tradition is something that elicits a shiver of respect and a desire to dine.
Arabic food is something slightly newer to me in the last five or so years. One of my good friends is married to an Arabic girl and her mother’s cooking… well to say I’m jealous that they get to eat it so often is a bit of an understatement.
And I love hummus – it’s something we make quite often at home and can never get enough of that garlicky, chick pea flavour. And falafel, well between you and me, they’re actually one of my favourite things to eat ever since I tried The Prophet’s version.
Receiving the email from Kait and Ziad with an invitation to come past their stall was enough for me to immediately organise a night out with my best friend Vee. She’s a big foodie too, and we love any time spent together so it was the perfect setting. On that night, The Hummus Club was set up at the Mt Hawthorn Hawker Markets and so we met up nice and early straight after work to get our feed on. 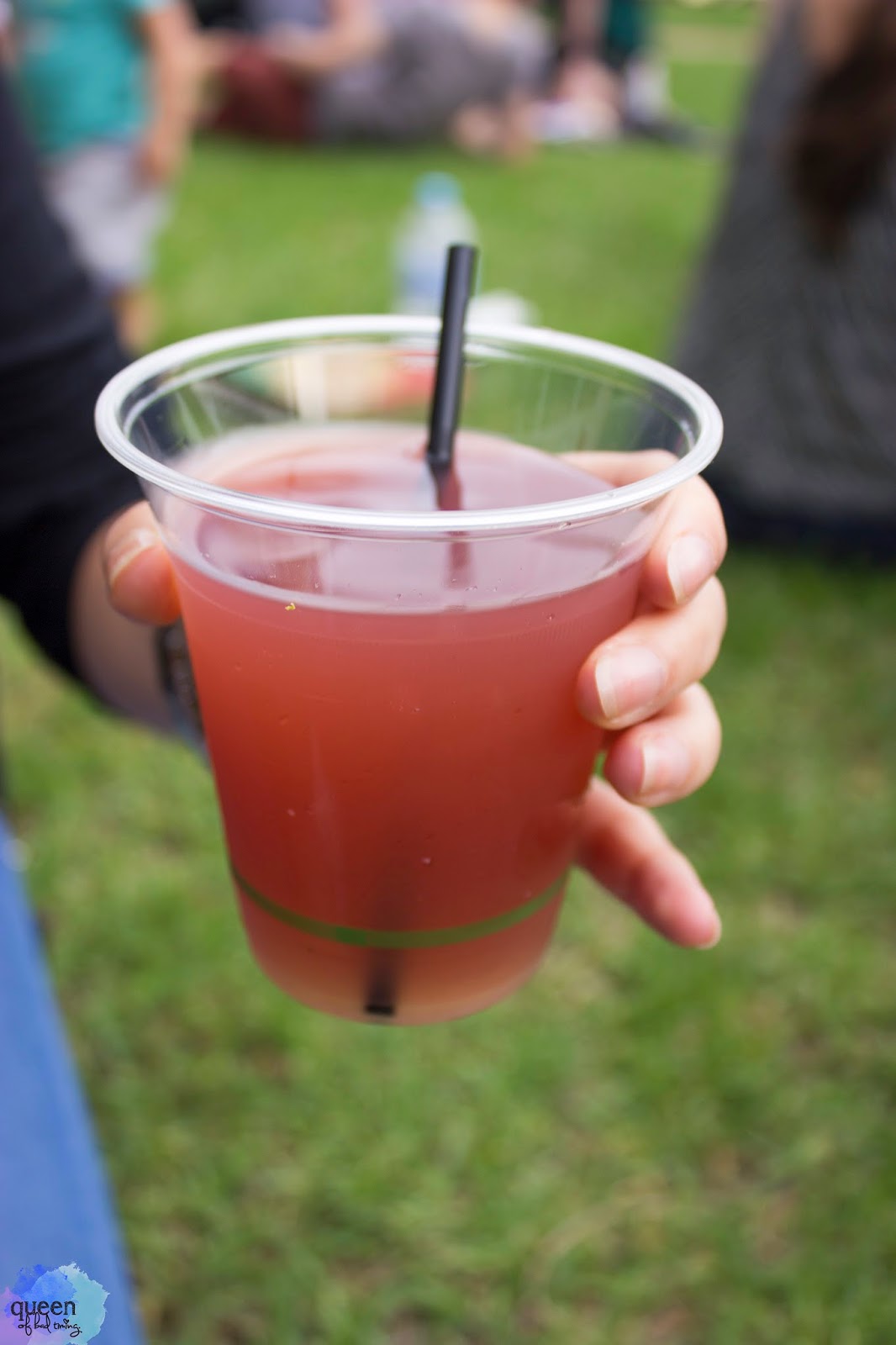 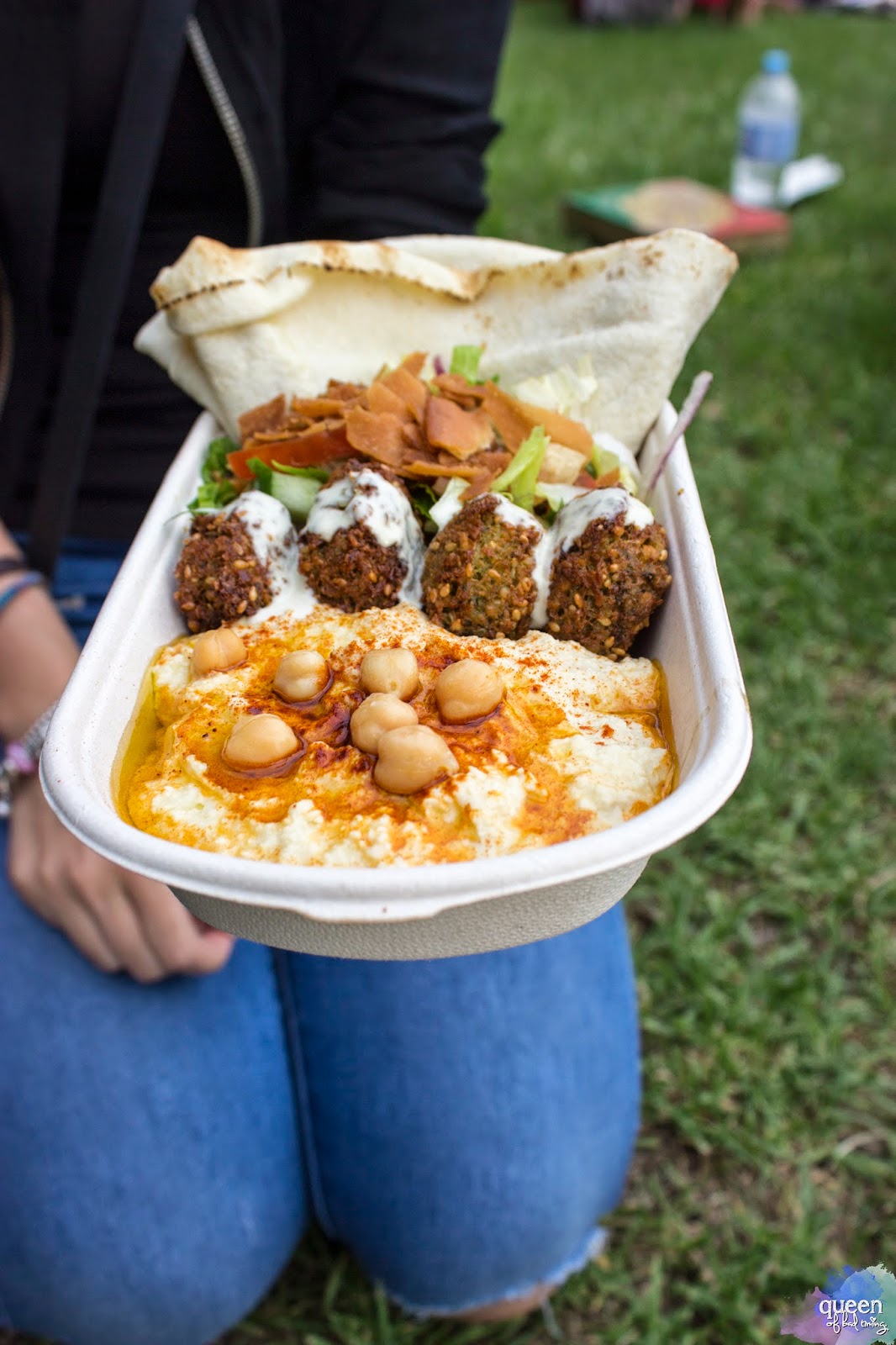 The Mt Hawthorn markets are a small affair but what I liked about them is that they seemed to have a good range of cuisines represented, some live music and enough lawn to sprawl out while eating/people watching.
We made our way over to the stand, introducing ourselves before being laden with some of their recommended dishes to try. The staff working at The Hummus Club were all super friendly and even though they were busy, they all had big smiles on their faces. And the smell… my god if I worked there I would have been sneaking bites in between serving people. This is probably the reason I write about food, not work in food. I can’t be trusted to hold back my own cravings!
The food we’re given looks so good and we make our way to a nice comfy area of turf to sit. Starting with the hummus sandwich ($10), it’s tightly wrapped pita bread encasing falafel, tomato, lettuce, red onion and tahini. It’s sooooo yummy! The falafel is beautifully crisp on the outside and fluffy on the inside. Watch out The Prophet, I officially have a new favourite falafel. The balance of fresh vegetables to the soft, moorish pita and creamy sauce is perfect. 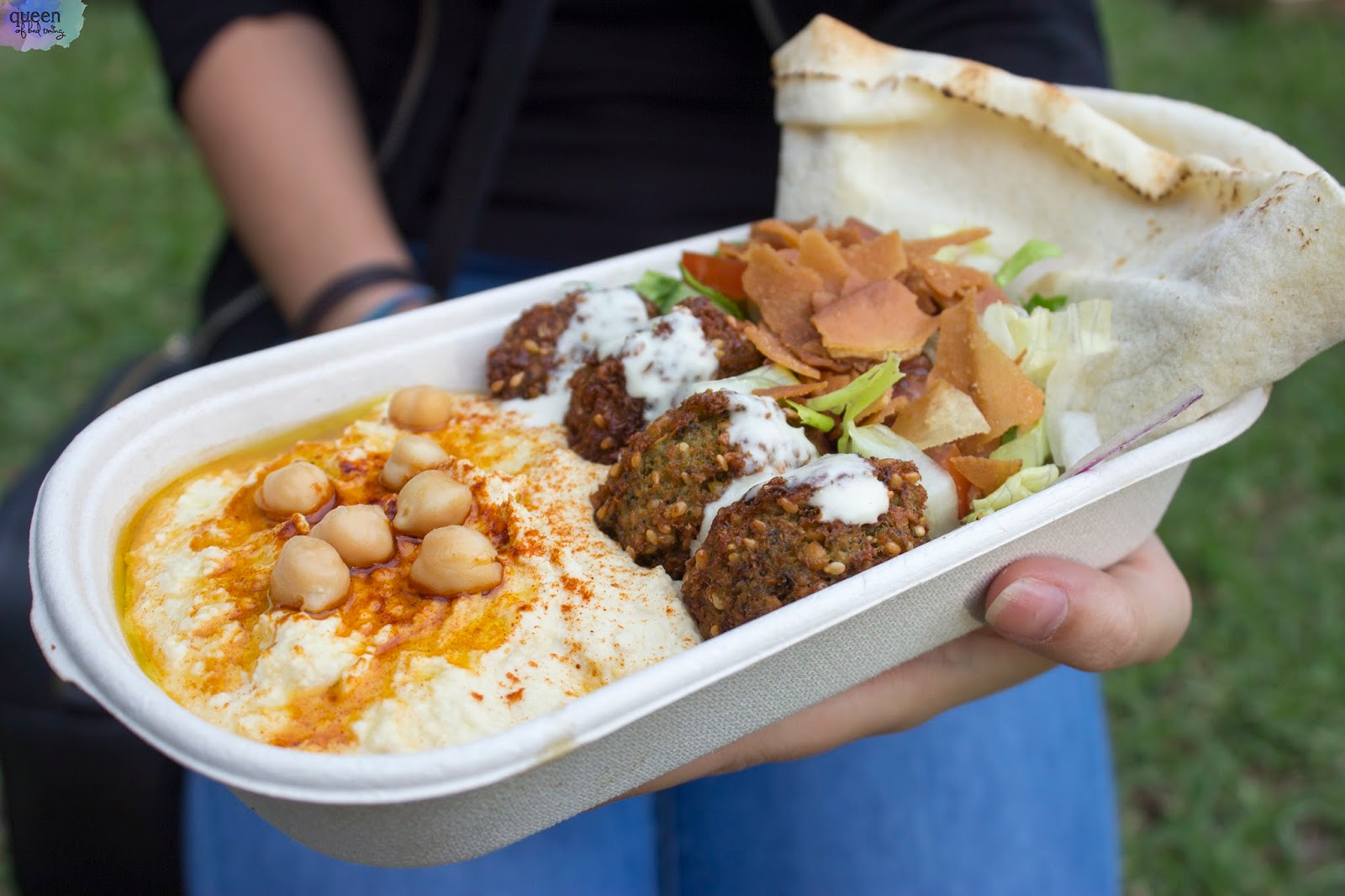 Taking a sip of my pomegranate lemonade ($3.00), I really like the flavour of the drink! It’s delightfully fizzy, sweet and has a lovely pomegranate essence. It’s just the thing to cleanse my palate before we dive into the hummus club mix ($13.00), a box with pita bread, fattoush salad, falafel and of course, an extremely generous heaping of hummus.
This is THE dish to order in my opinion! The fattoush salad is lovely and fresh, with crunchy goodness scattered over the top. There’s four of those plump falafel balls that crack open like an egg, steam cascading out to reveal the light interior.
The hummus is equally delicious, as I expected it to be since it’s their namesake! It’s creamy and quite smooth, the garlic and chickpea flavours strong. I like the lug of oil over the top, it gives it a more authentic feel and adds to the overall taste and texture.
We ate and ate and ate, and when we were finished we were so happy with everything we tried from The Hummus Club! I felt very spoiled by their generosity and variety of dishes to try. 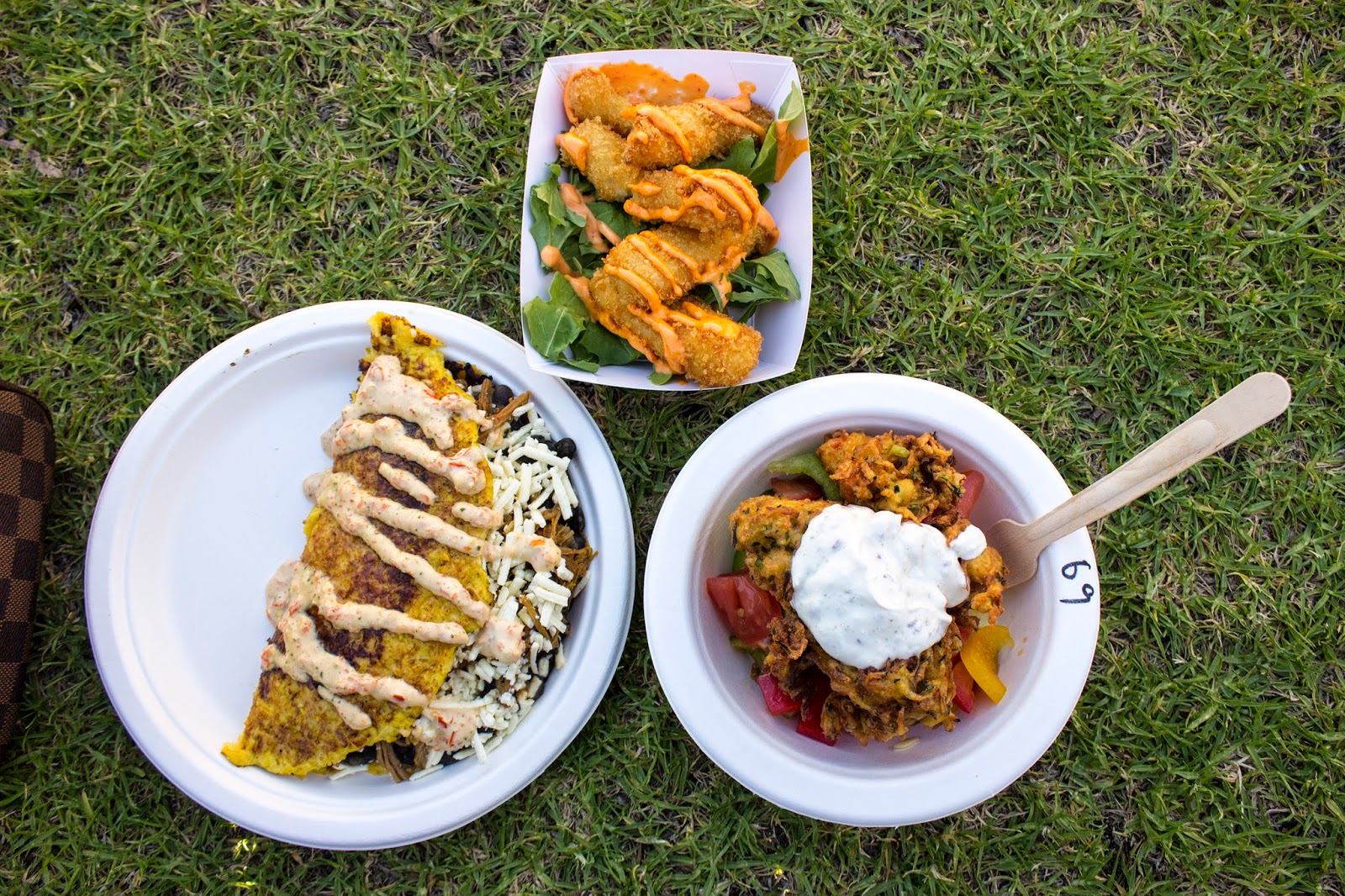 After the success of the Mt Hawthorn markets on the Friday, the boy and I decided to finally pay a visit to the Maylands markets on the Saturday night. We headed down around 6pm and after a battle for parking spots (and me kind of just creating what I thought could be a parking spot), made our way into the already buzzing crowd.

A big part of me was longing to return to The Hummus Club, but in the end my desire for diversity won out so Jeremy and I did a divide and conquer attack, splitting up to grab a couple dishes to share between us. When we were reunited on the grass 5-10 minutes later I was happy to see we’d brought with us a range of some tasty dishes. 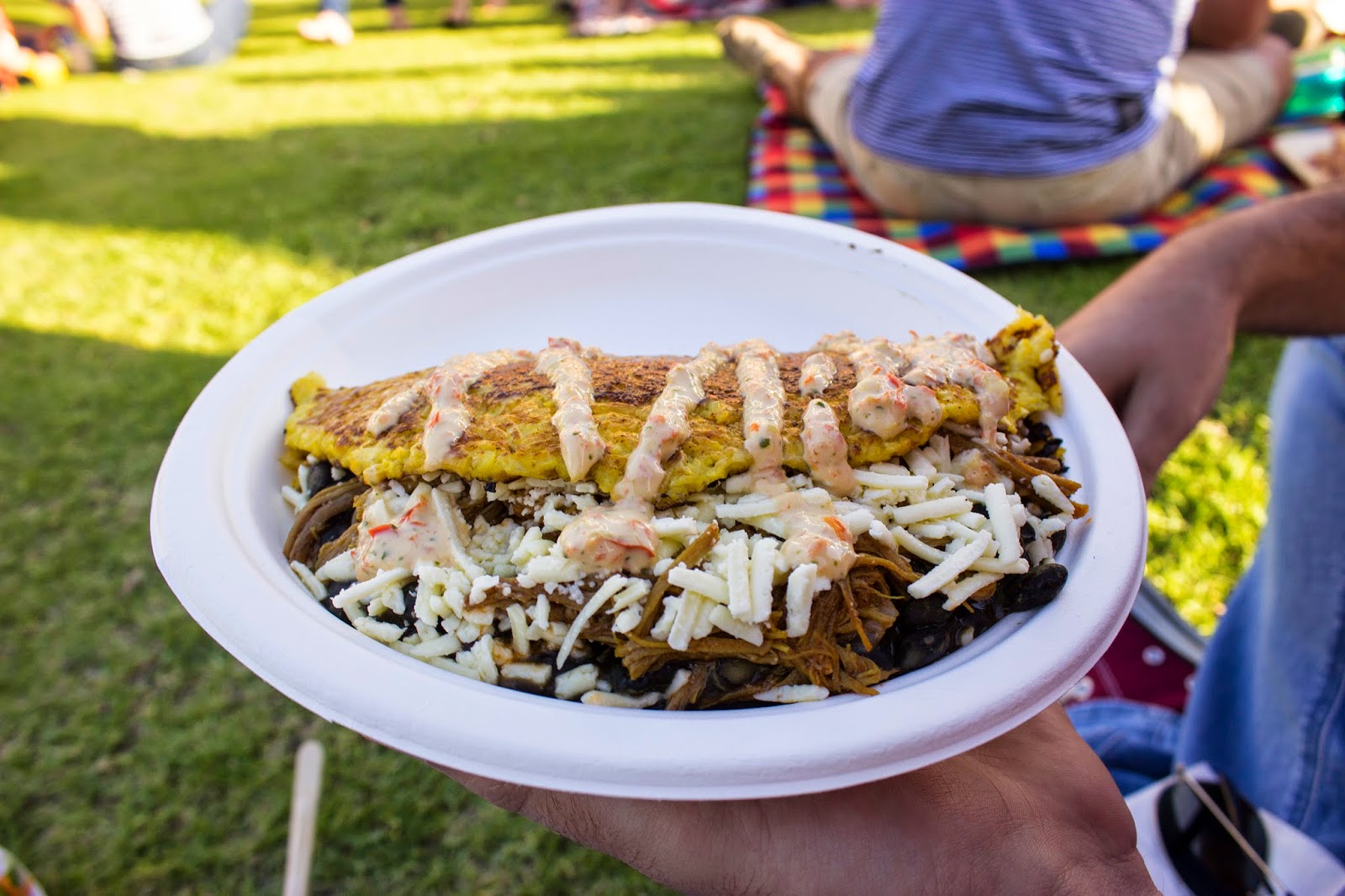 My first dish of choice was the pabellon chachapa ($13.00) from Amaizing, a stand offering fusion Venezuelan and Australian food. Folded over in half like a calzone, this is a pancake made from sweet corn filled with shredded beef, black bean and feta cheese. I give a generous squeeze of their complimentary spicy sauce over the top as I collect my freshly made order.

It’s so yummy! The pancake soft and chocked full of sweet corn flavour. I would have loved to see  bit more texture since the filling and outside were both on the softer side, but it definitely wasn’t mushy so I didn’t mind too much. The meat inside is generous, melt in your mouth and has a good flavour to it. I love black beans so these are a welcomed addition to the dish. The spicy sauce is also delicious! However it didn’t have the chilli kick I’d hoped for based on the name. 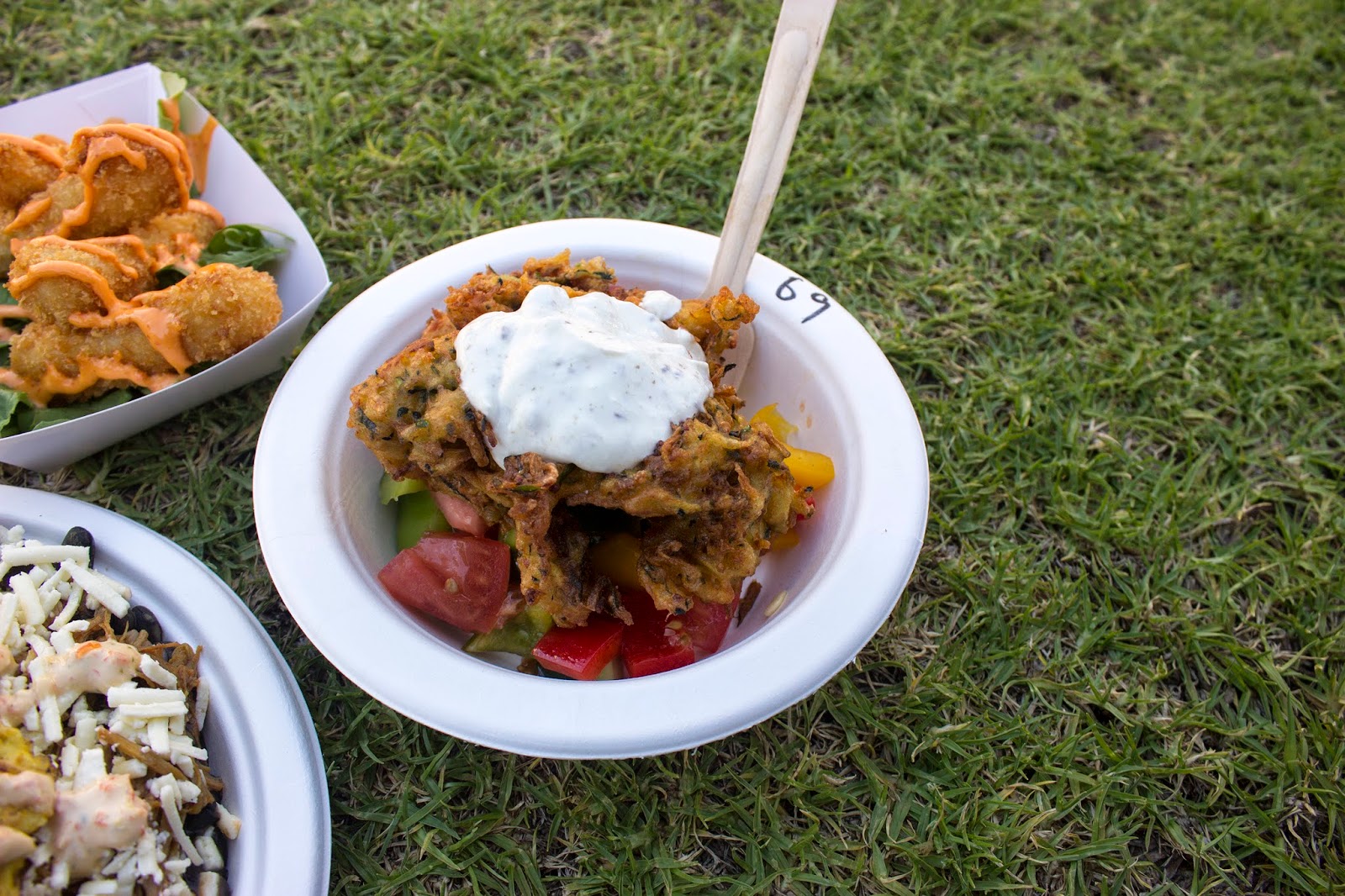 The boy’s choice of Back to Balkan‘s zucchini fritti with Greek salad and cumin yoghurt ($10.00) was a welcome addition to our dinner. The team behind this stand are formerly of Divido, and have a loyal fanbase of diners who used to attend their Back to Balkan degustation nights. I never made it down, so it’s nice to see I haven’t completely missed out.

The fritti is crazy crispy, offering a satisfying crunch as we bite down. Even with the deliciously spiced yoghurt (something I often do at home too), it retains that lovely texture. And what I particularly like is that on the inside, it’s quite moist and soft – having that ideal contrast. It’s well seasoned and tastes damn good. 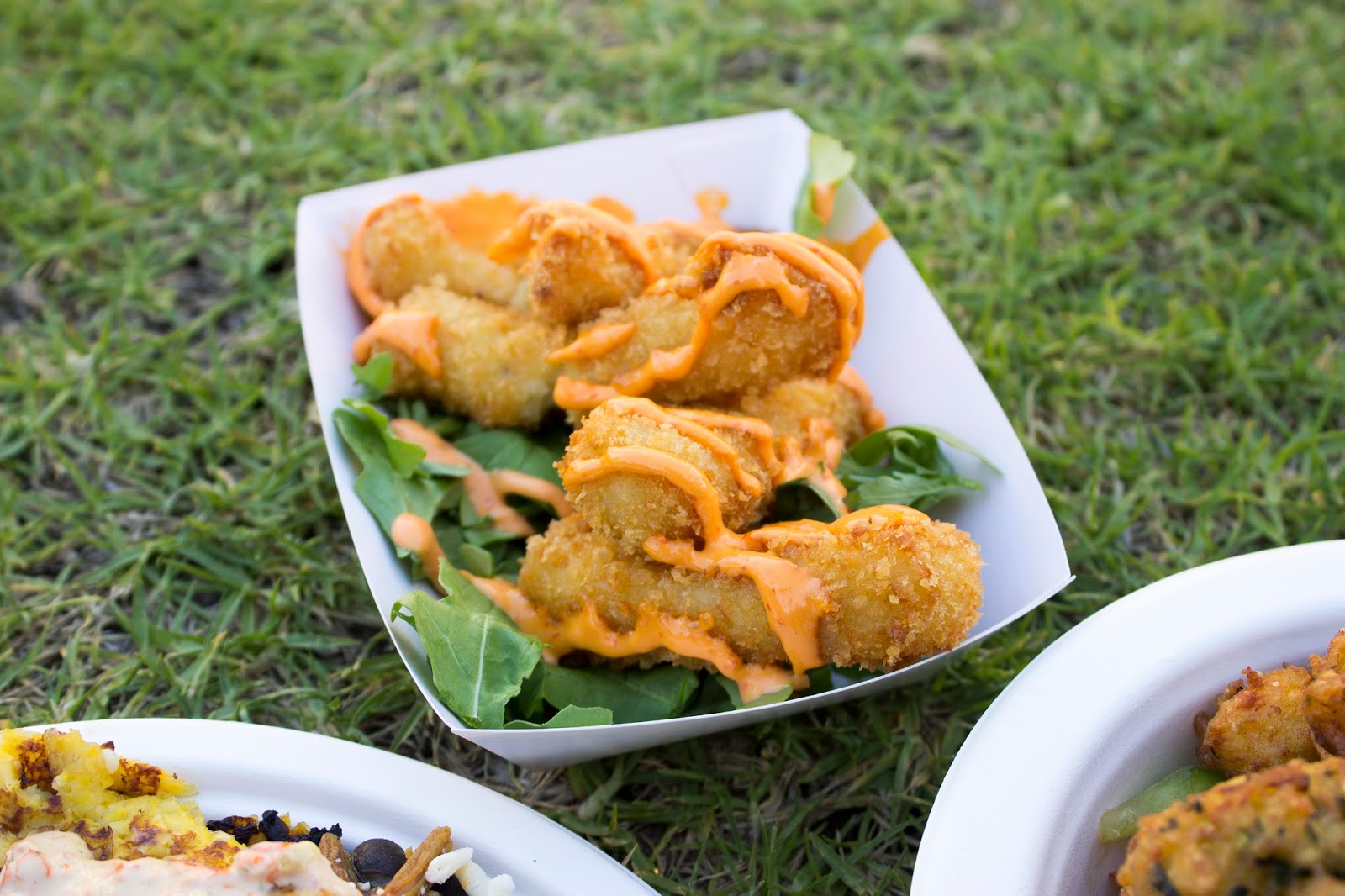 Not knowing Jeremy would pick something fried I also choose a fried dish for our final savoury item. Never mind though, who doesn’t welcome the sight of golden crisp croquettes like these!

Made with three cheeses and caramelised onion, these Tapas Man croquettes ($10.00 or $12.00 from memory) were piping hot and drizzled in a creamy chipotle mayonnaise. There’s something so enamouring about the cream and crunch of a croquette that holds a dead place in my heart – and the caramelised onion flavouring is a nice touch. It’s just strong enough to make you notice and appreciate the sweet notes. 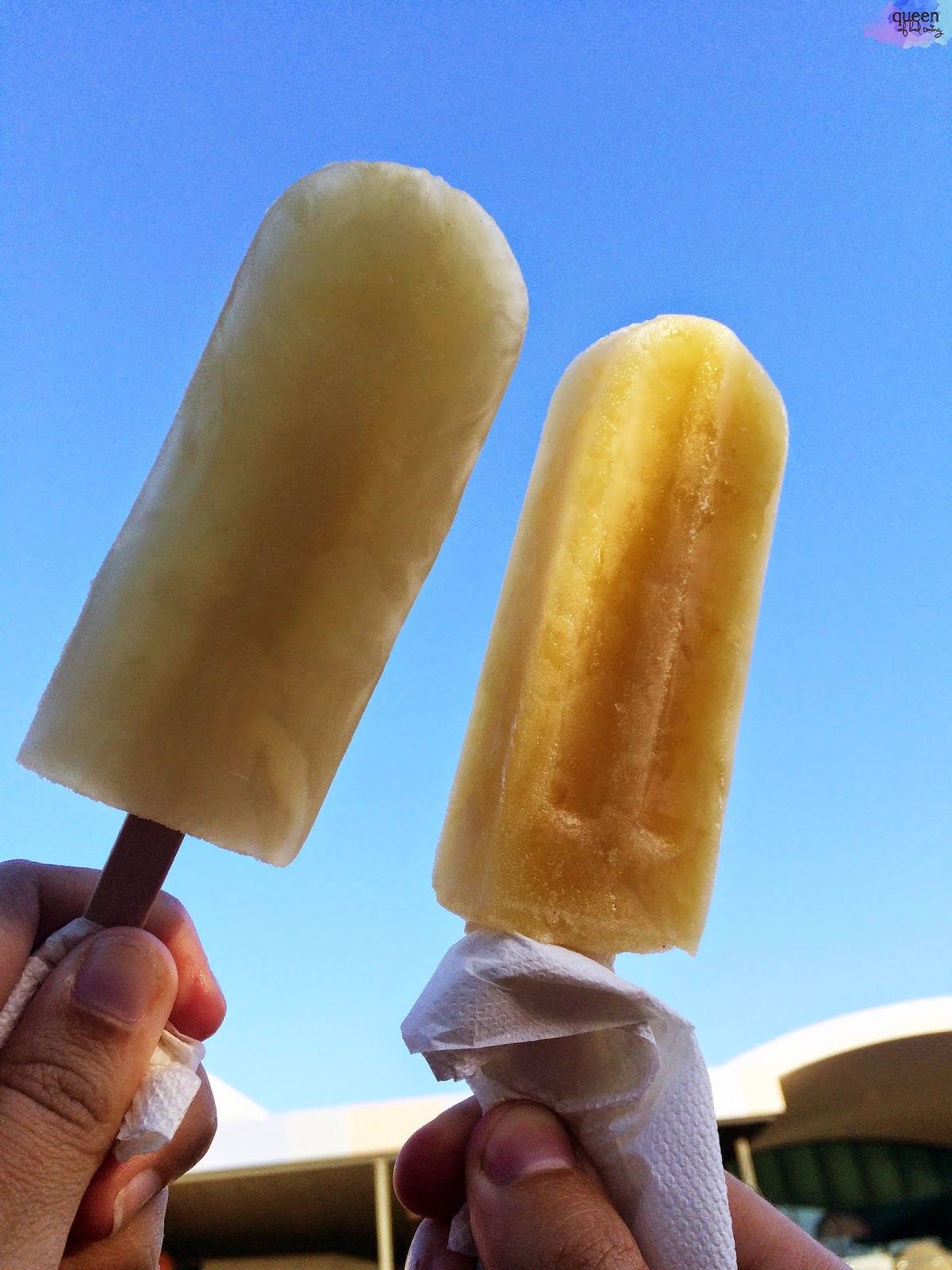 Though we could have eaten a little more we decide to call it there for the savoury dishes and make our way over to the Delish Ice stand for a sweet ending to our meal. Normally I always am drawn to the watermelon and lemonade pop they sell, but this time the basil and elderflower catches my eye so I decide to try something different.

It has a really floral, syrupy flavour that is perfect for a hot summer’s night. The basil and elderflower ingredients are well balanced, with neither overpowering the other. It’s refreshing and a nice change of pace.

My boy has his eye on the lamington pop but in the end goes for the lychee, pineapple and lime. It’s fruity, sweet and has pops of spice from the addition of star anise and cinnamon. He looks happy as Larry munching away and we both agree that it’s the perfect way to finish up at the markets.

It’s after outings like this that I can say I really do love our great city and all the exciting food, drink and events on.

Not just bread on this Cutting Board

The rise of pretty plating at Little Bird Cafe

Thanked and thankful at Prego