Worth the wait for Marumo 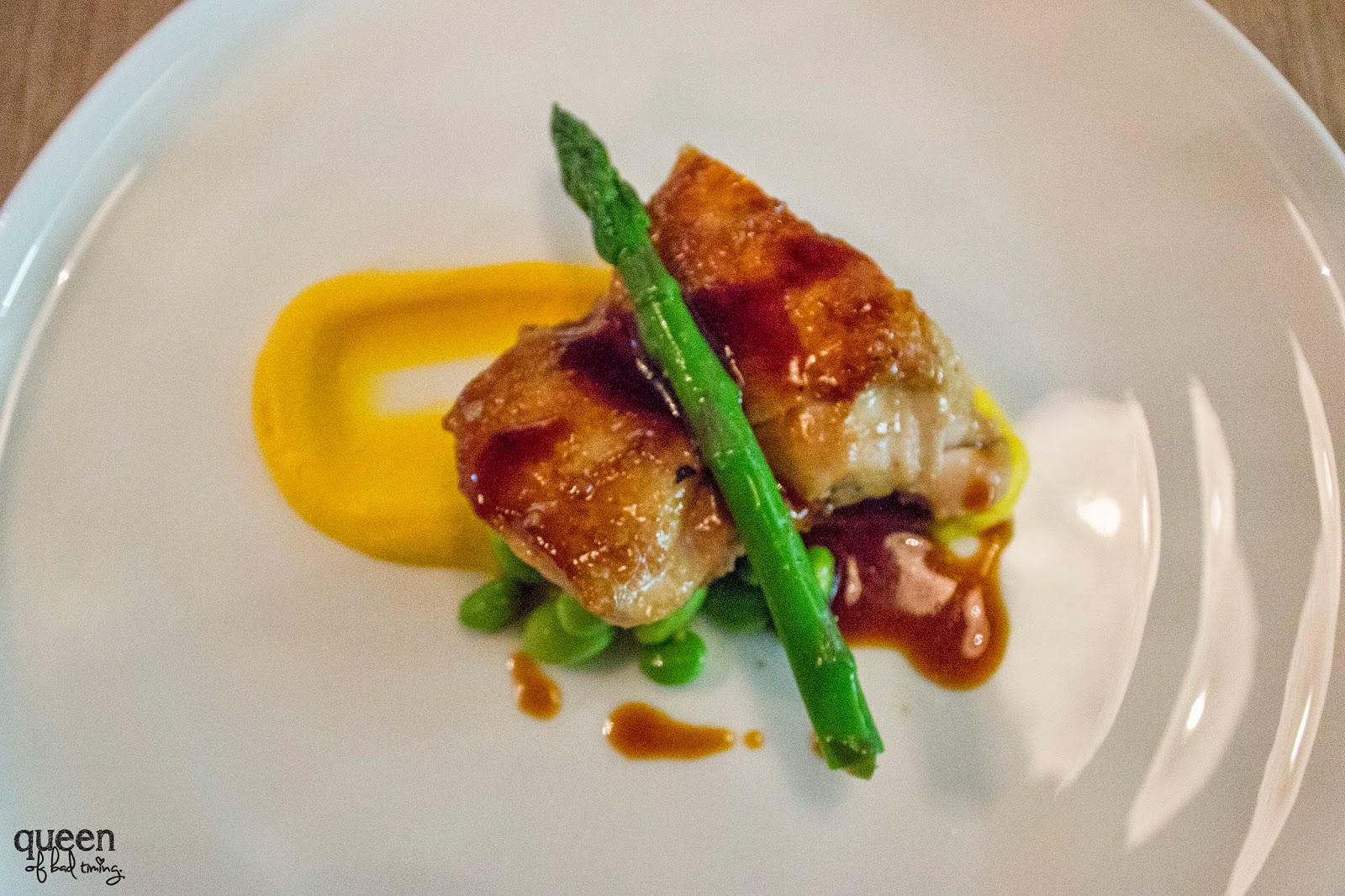 About a year or two ago I heard a rumour of a restaurant. One that served fine dining, omakase style Japanese cuisine. One with no menus, no walk-ins and no way to eat there unless you managed to get a coveted booking (which at one stage were booked up 6 months ahead). I mean at $55 per person, can you blame everyone for adoring such a place? And taking into account they seat less than 30 people a night, it feels a bit like an urban legend than reality.
I’ve been trying to get into Marumo since I first heard of it. But timing and their decision to shut down temporarily and relocate to Nedlands meant it was always just slightly out of my grasp. I’d tried it all – even setting my alarm so at midnight on the first of the month (when they released the next month of booking dates in the schedule) so I could get up and secure a spot. Thankfully just when I was ready to put it on the back burner, fellow blogger Perth Munchkin texted me to tell me new bookings had come up. And I managed to get one! 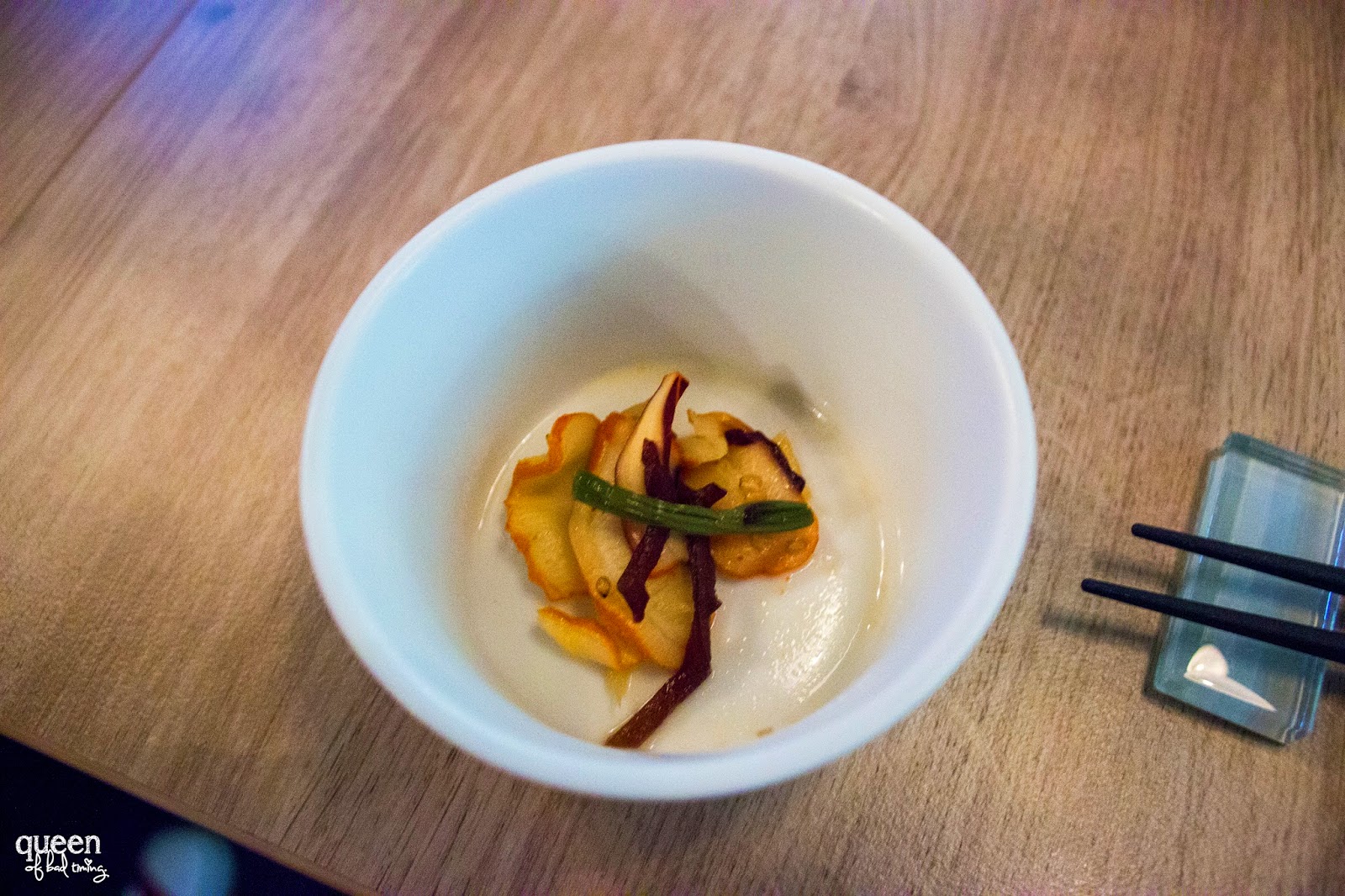 The three months to our booking actually went quite quickly, and before I knew it, our dinner had rolled around. Knowing my boy and mum were also really eager to try Marumo out, I booked a table for the 3 of us and we arrived on the dot for our 7pm booking. It’s definitely a blink and you’d miss it scenario for this Stirling Highway restaurant which is so unassuming on the outside, you’d have to be looking for it to know it was even there.

The decor is simple. Functional but quite aesthetically pleasing with a real minimalistic Japanese approach. There’s less than 30 chairs in the whole restaurant, and already other tables are filling up as people arrive for their bookings. I’d actually forgotten it’s BYO instead of ordering alcohol (whoops) so we stick with the lovely tea on offer instead.

After a short wait a complimentary amuse bouche comes out to the table. It’s a cold squid salad which has that lovely pickled flavouring Japanese food sometimes injects in as a counter to fresh produce. It’s bursting with flavour, and definitely kick starts of my tastebuds into feeling eager for what the night will bring. 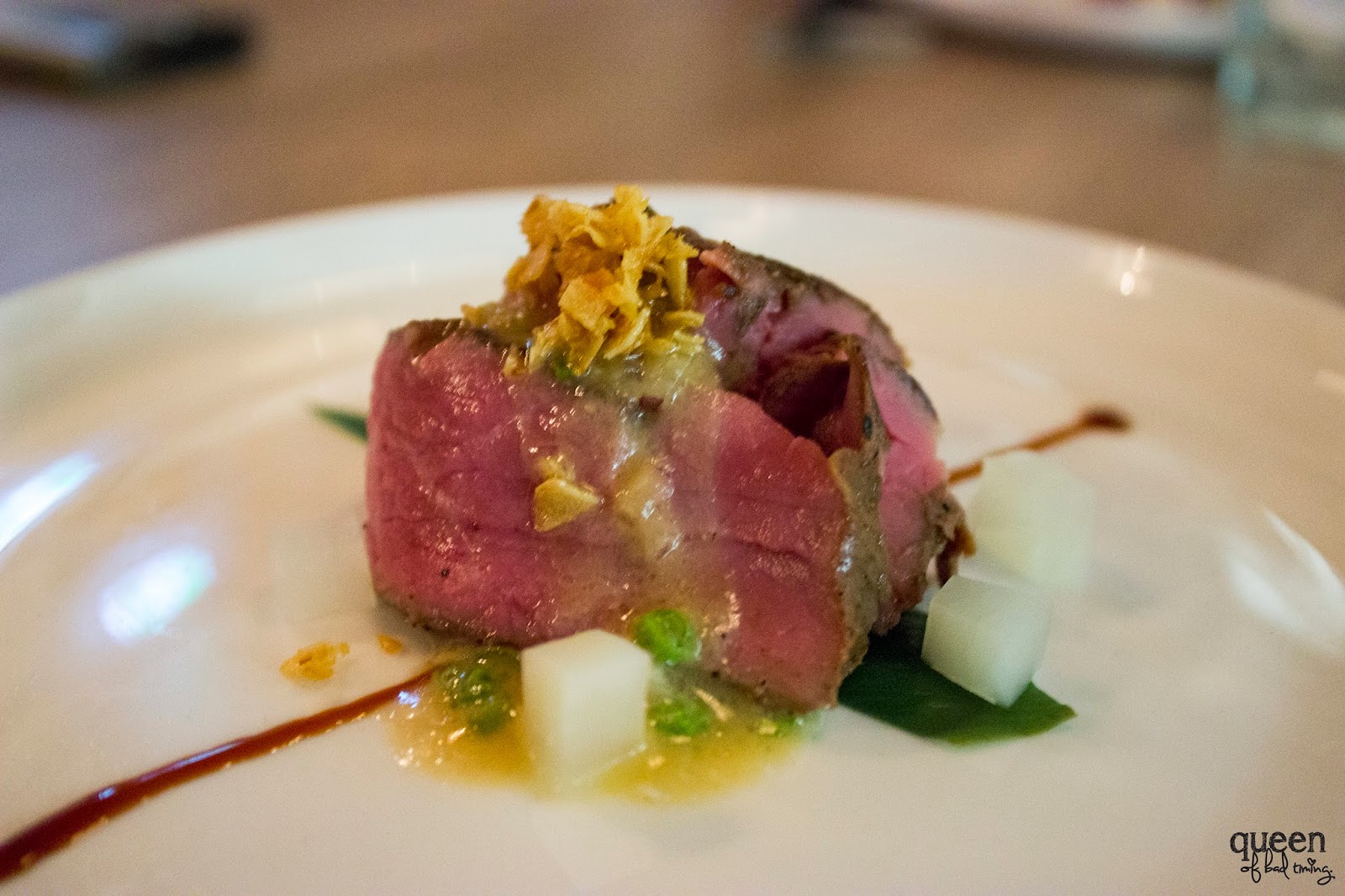 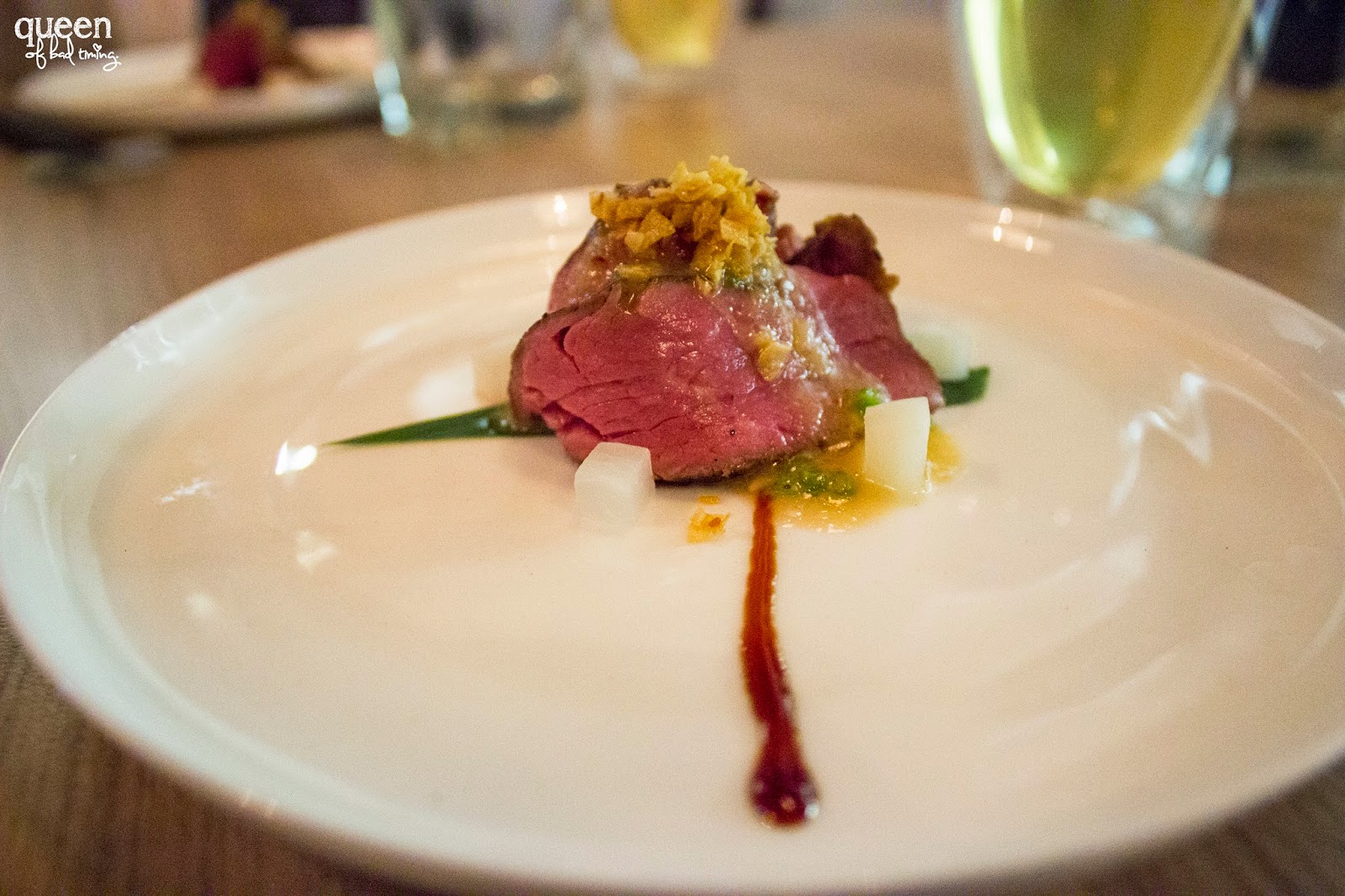 The second course is simply described as ‘beef and pickled daikon’. It’s a really stellar dish, with the sous vide Black Angus fillet soft and tender, the meat falling apart with ease as our knives slid through. The little cubes of daikon are sweet and peppery, while retaining that slight sharpness of the pickling method. The temperature of the meat could have been a bit hotter for my liking, but that’s a very small comment, and didn’t impact how much I enjoyed the taste of this dish.
While it’s jam packed with flavour, it’s a small dish so I hope at that moment we start to see the serving sizes increase as we go – otherwise my boy will definitely be hungry after! 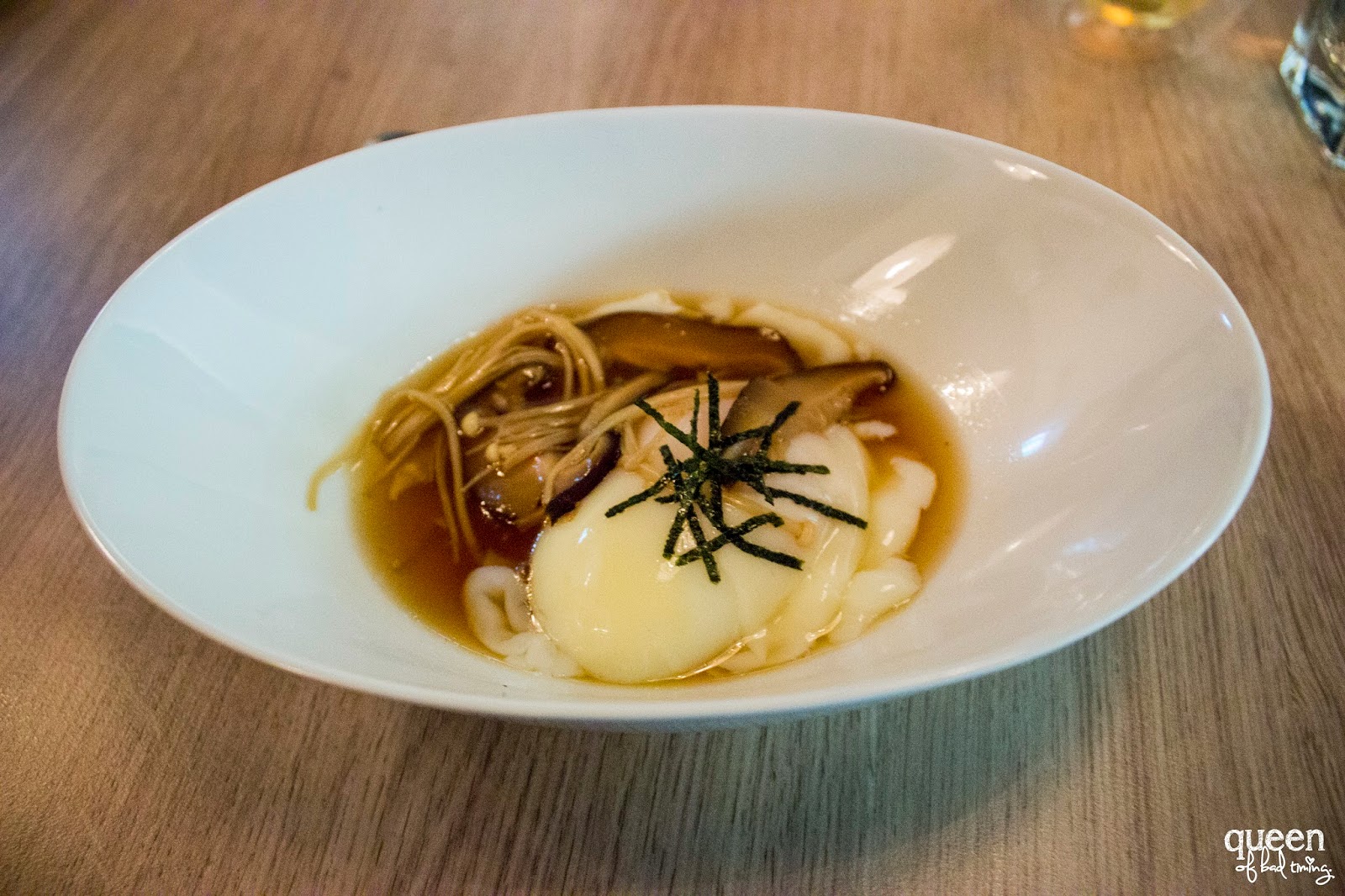 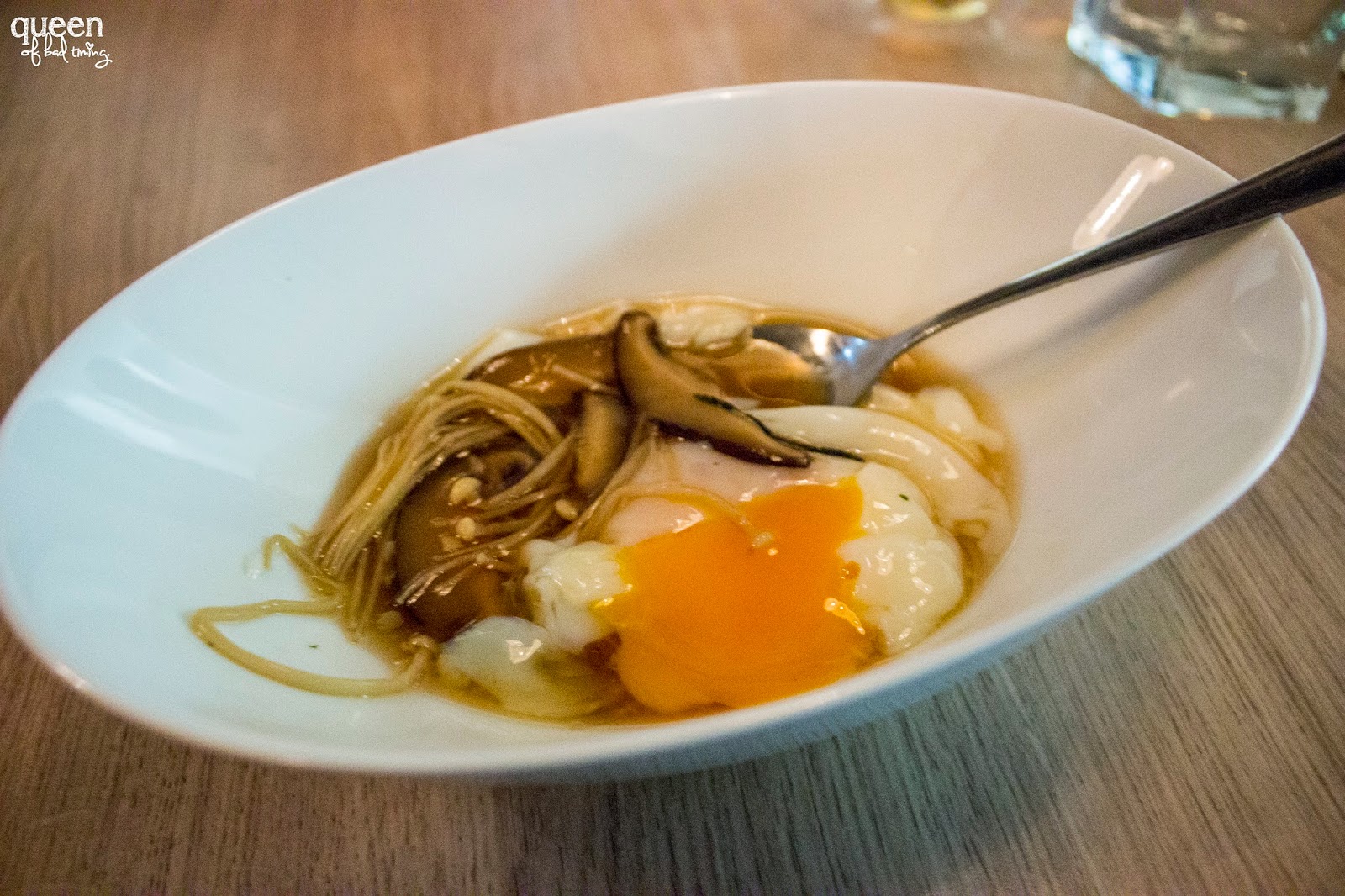 The Swan Valley egg and mushroom dish is definitely one that feels like it’s practically made for me. The egg has been slow cooked, floating happily in a rich and deeply flavoured mushroom broth. Look how amazing that yolk is when I pierce the surface! It sinks into the broth slowly, coating the little enoki mushrooms and enriching the flavours even further.

I’m not a vegetarian by any means, but these days our diet seems to have less meat than ever – so I really appreciate a great dish like this where humble ingredients can really shine. And me being the egg fiend I am, it’s a winner for sure. 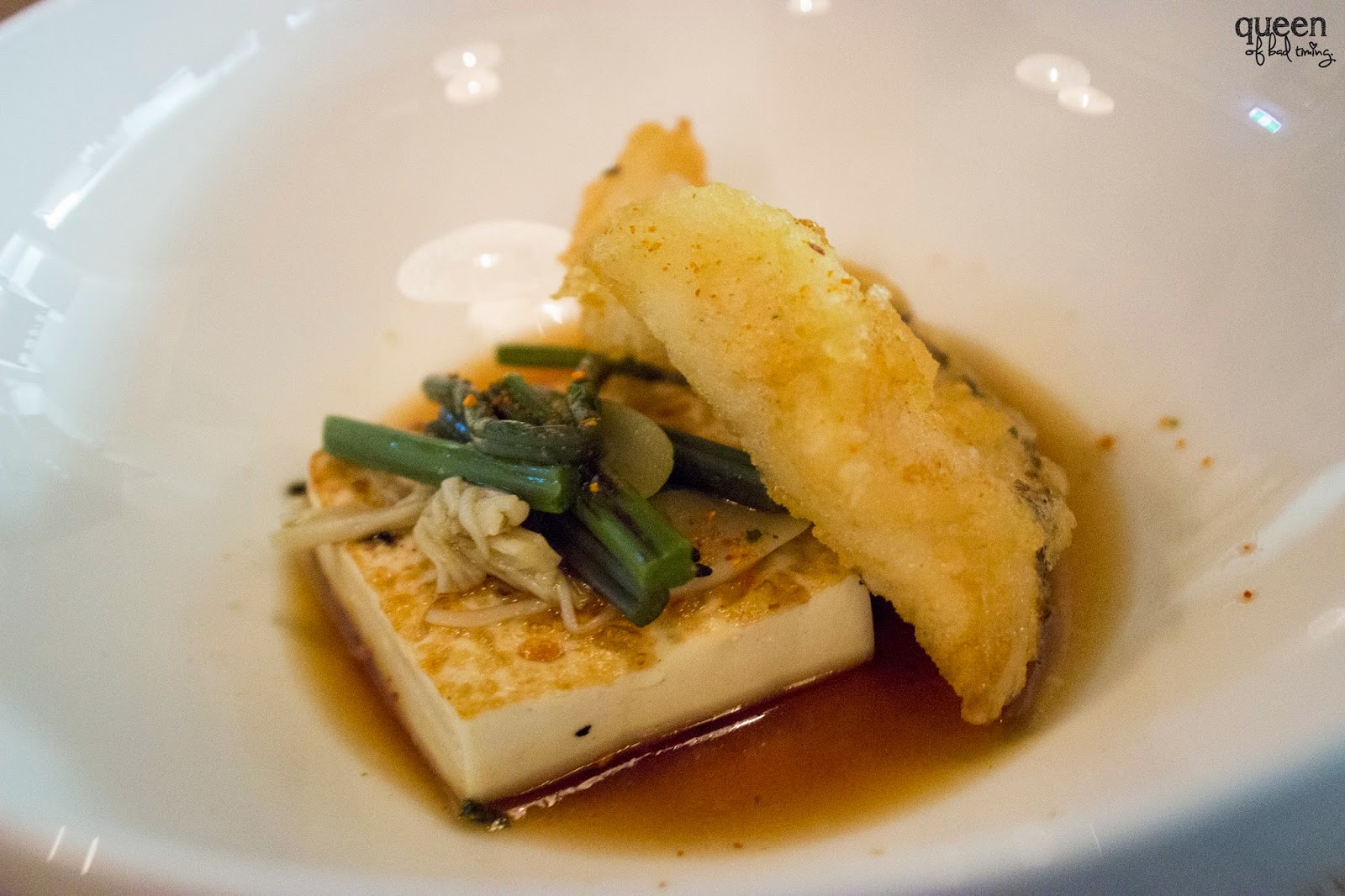 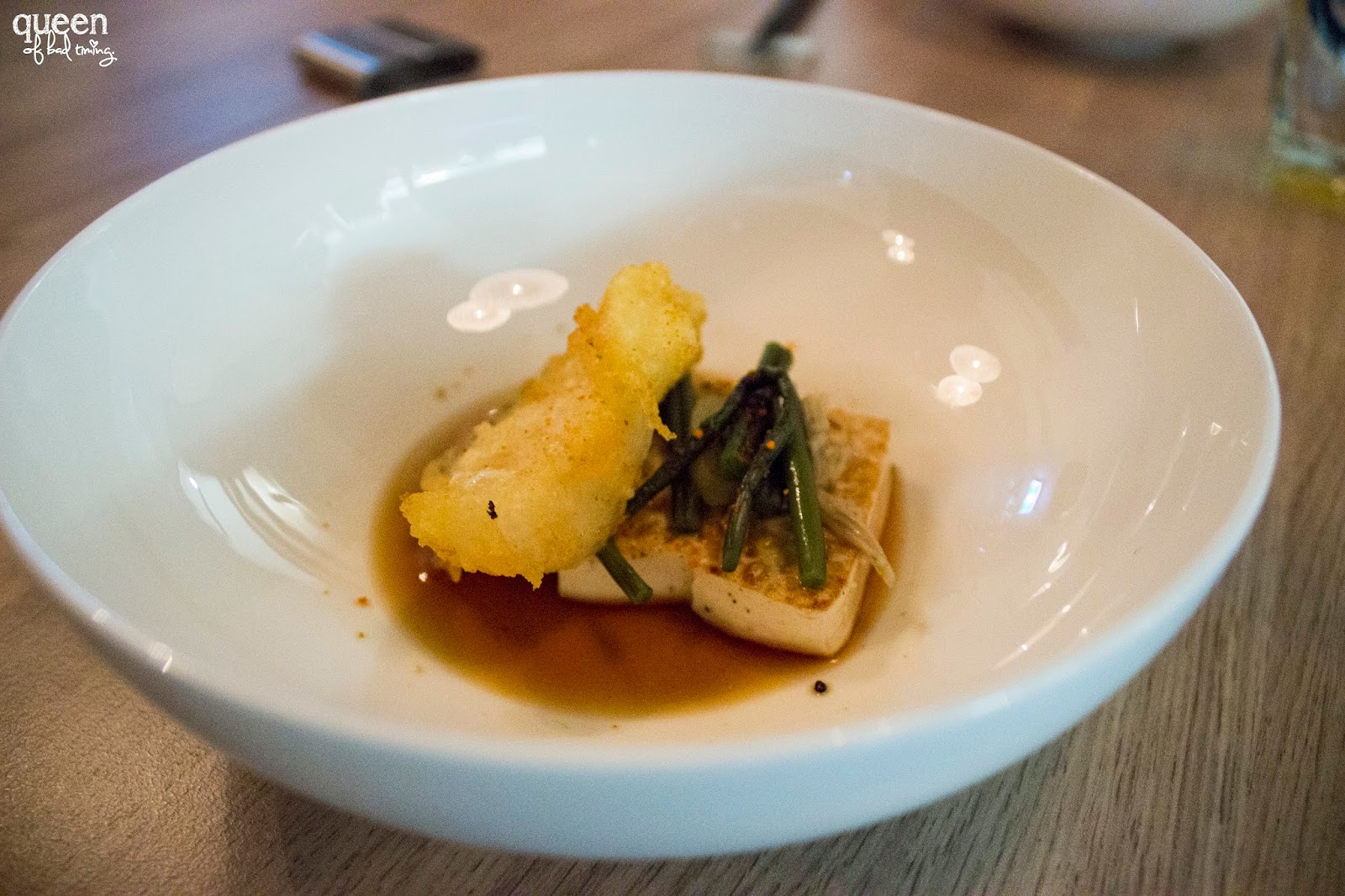 Not wanting to wax lyrical about every dish, but the next was one of my favourites for the evening. I mean when you’re describing it with ‘Toothfish and Tofu’, you already have my attention. If you’ve ever read previous posts I’ve written, I’m a massive toothfish addict – so much so that if it’s ever on a menu I’m guaranteed to order it. Similarly, tofu is also one of my dietary staples and I love seeing it used in different ways and different styles of cooking.

The toothfish at Marumo is second to none. It’s so wonderfully soft and ethereally light, with the flaky flesh encased in an airy batter. It’s steaming hot, and the meat melts the minute it touches my tongue. There’s definitely great work at hand here, with the firm tofu soaking up the perfectly balanced umami sauce, and the little greens offering pops of fresh juiciness. 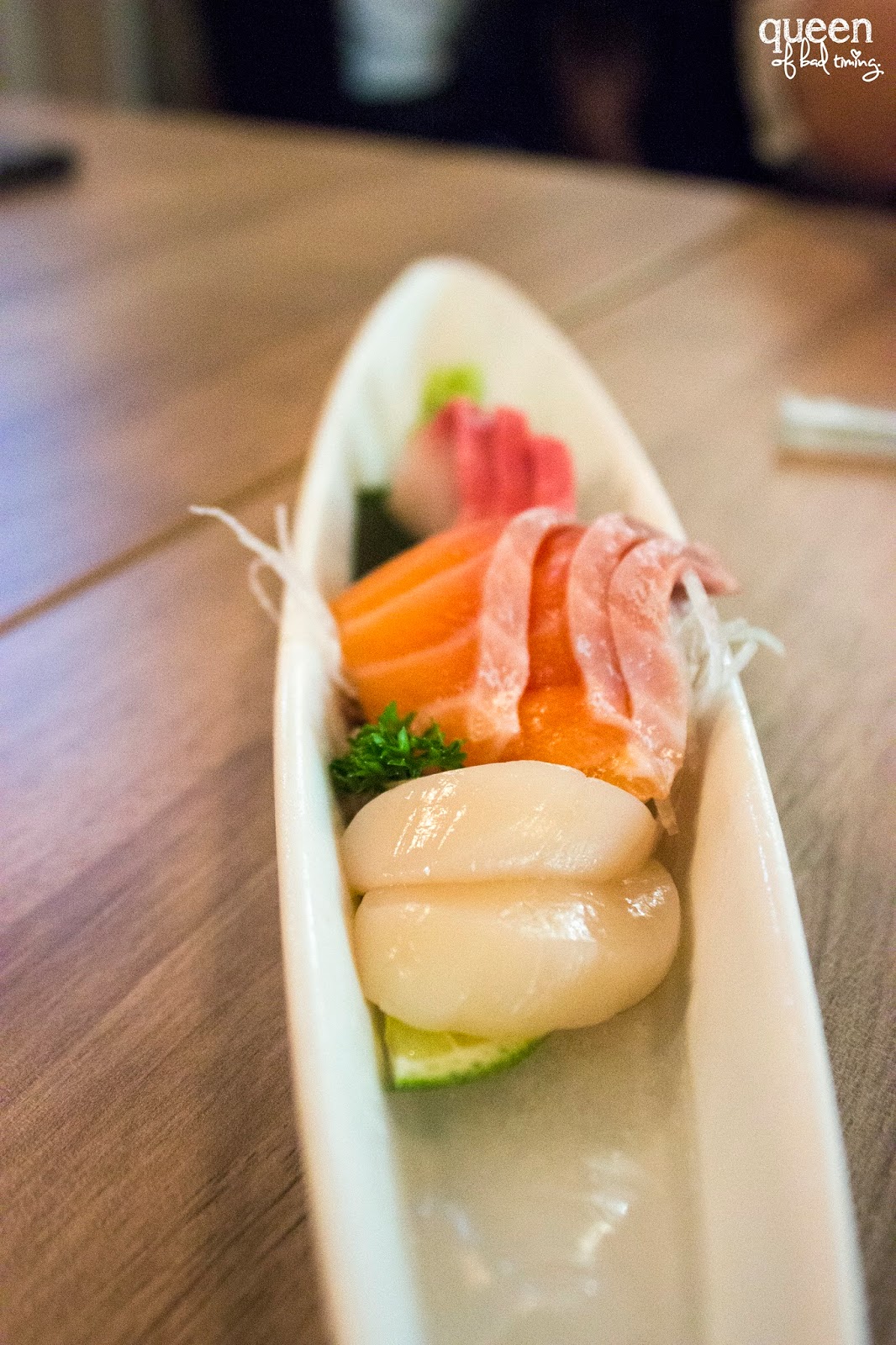 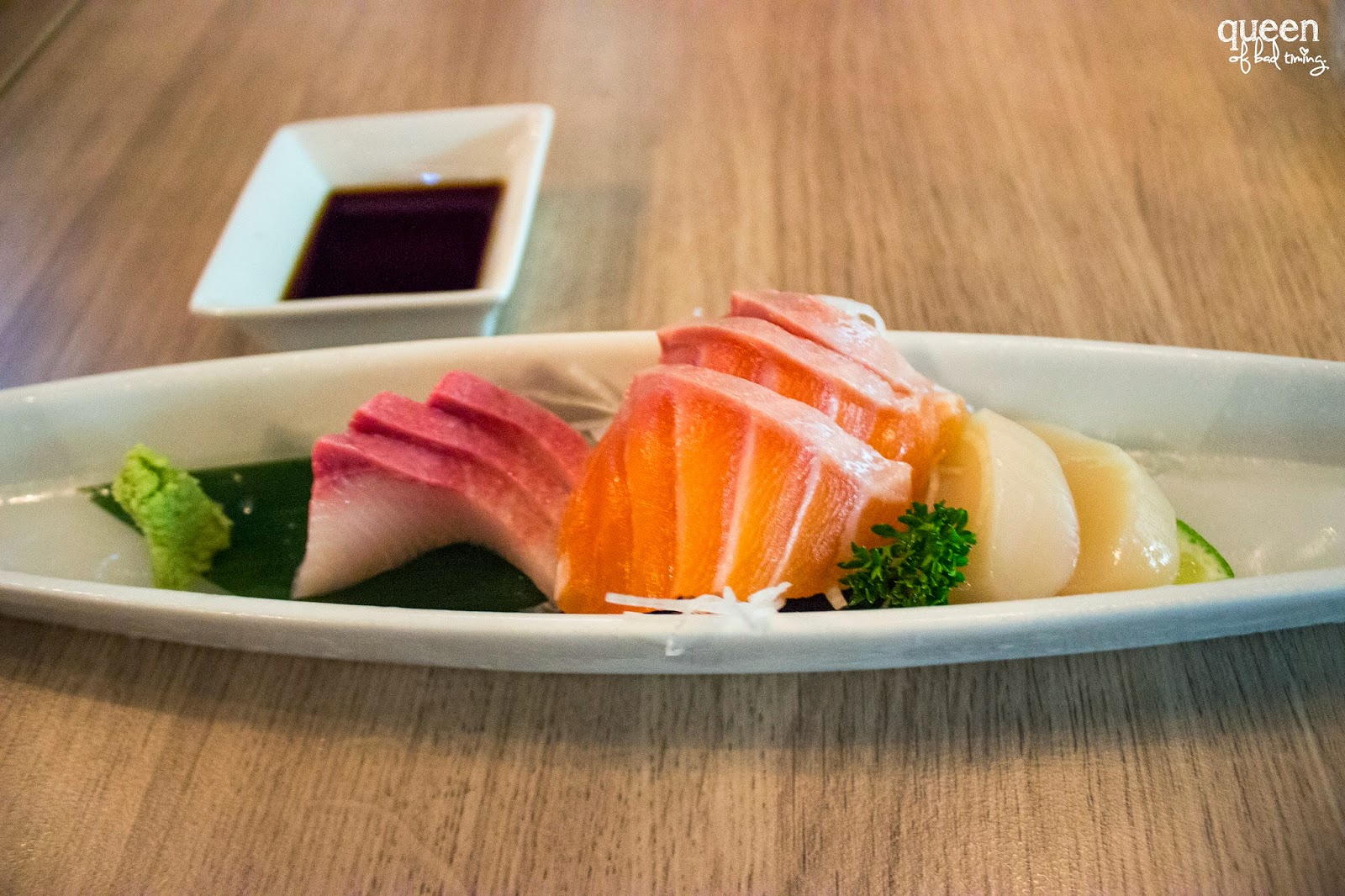 The next dish in our omakase menu was the Chef’s selection of sashimi which featured kingfish, salmon belly and Hokkaido scallops. Chef Moe grates his own wasabi so we’re given a warning that it has some bite!
I start with the firm kingfish, enjoying the almost crunchy like texture and the way the delicate flavour is enhanced with the oomph of the wasabi. It’s a nice distinction against the softness of the salmon belly which has an unctuous, oily texture and that desired melt in your mouth freshness. My favourite is definitely the scallop which is so silky and sweet, and has absorbed some of the lime flavour from the slice it sits upon. 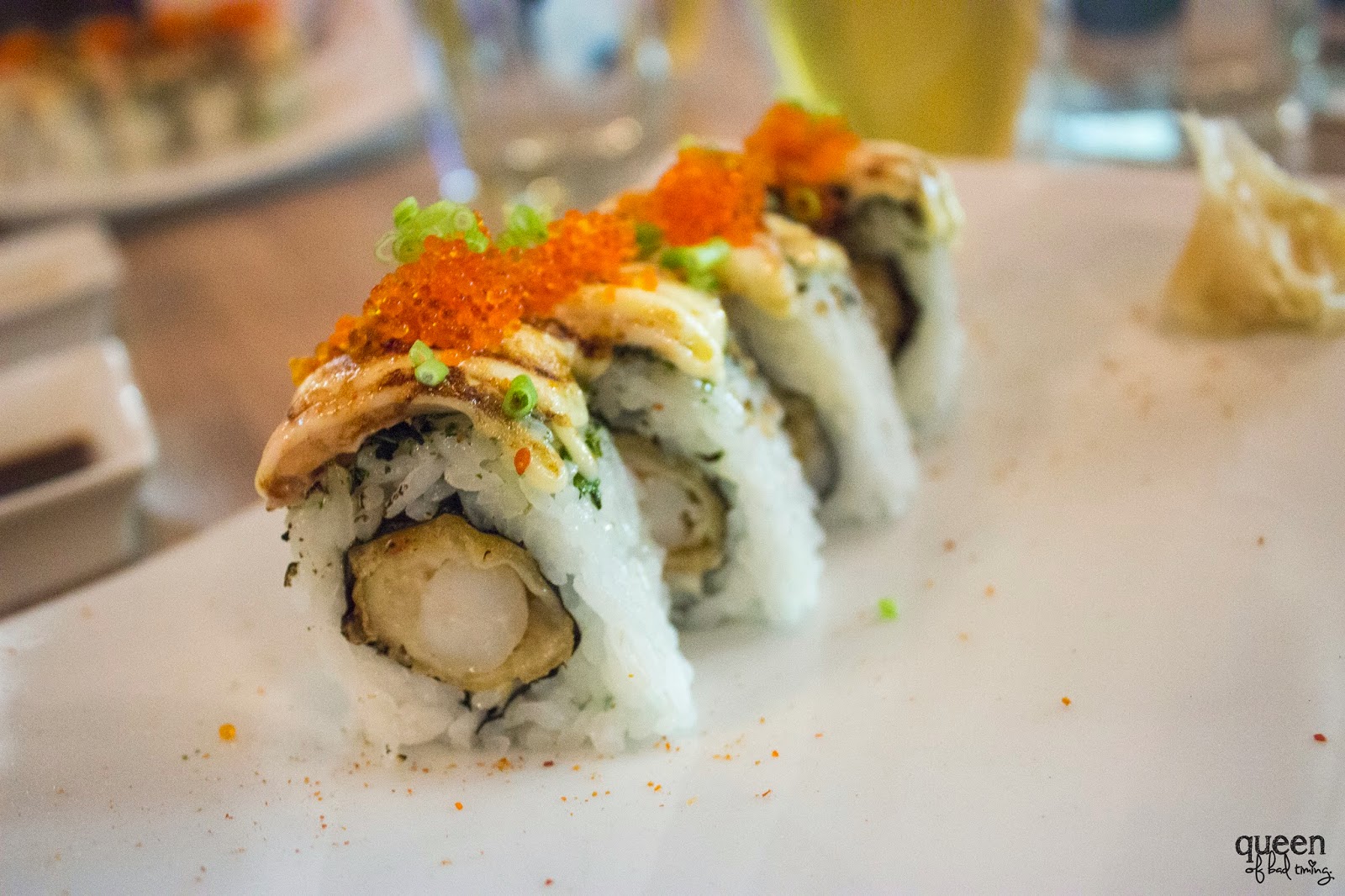 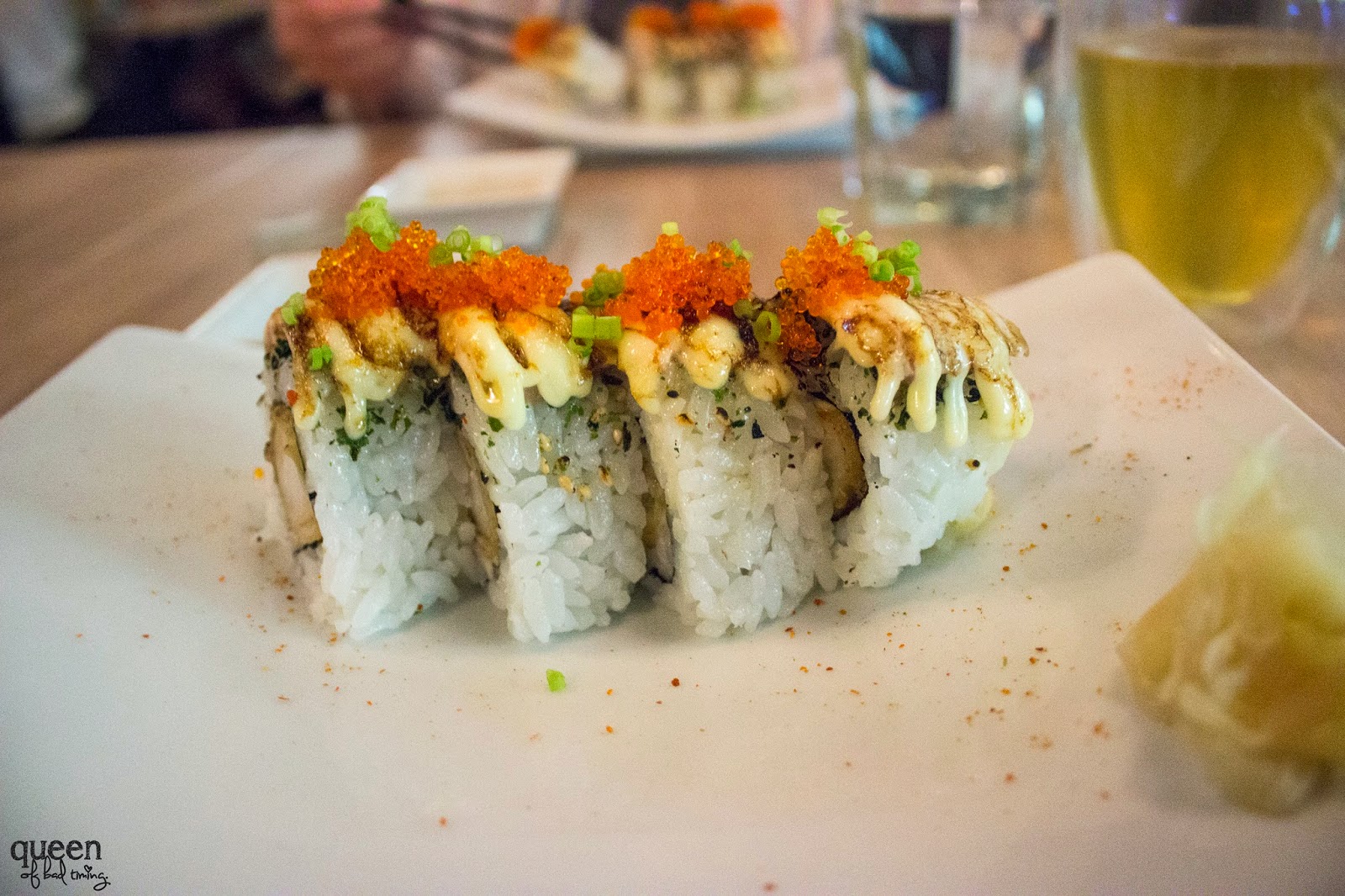 When I saw Tasmanian salmon belly sushi on the menu I have to admit, I wasn’t overly enthused. Since dining earlier this year on the most incredible sushi in Taiwan, I haven’t been able to find sushi here in Perth that meets those highs. So I think it’s a pretty big statement for me to admit, Marumo reached that bar with ease.

On each of our plates sits four slices of sushi, with tempura prawn on the inside, torched salmon belly on the outside and tobiko. It’s smokey, salty and sweet, with crunch and softness. Basically everything you could want in sushi and more! It’s the hand down winner at the dinner for us all – and we would have happily paid extra for another serving. 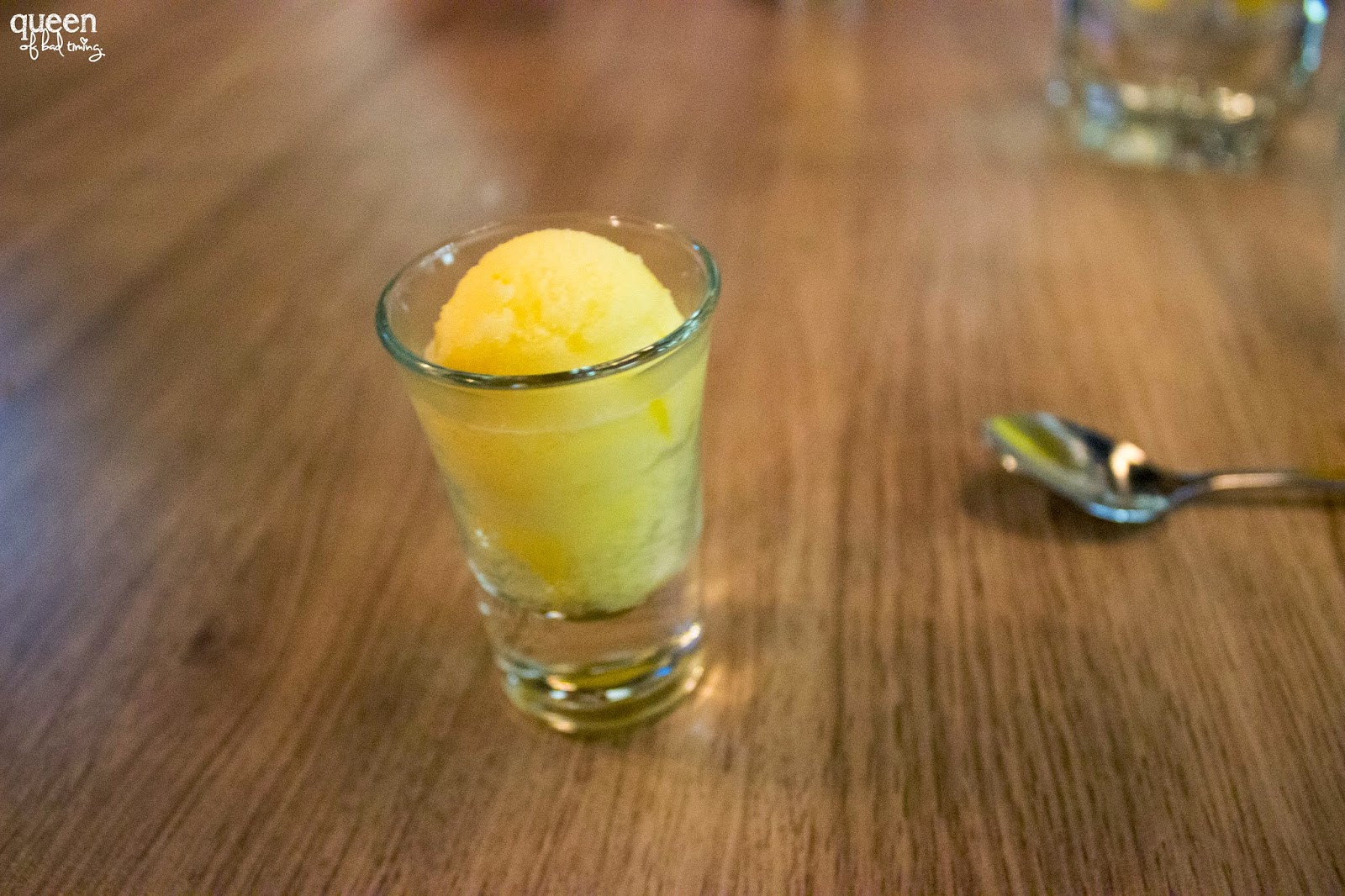 Before our final savoury dish is served, we’re given a palate cleanser of orange sorbet. It’s simple but perfectly executed – screaming of orange flavour with the juiciness and little slivers of zest. There’s something so delicious about a fresh sorbet that trumps other sweet dishes – it’s that ideal blend of sweet and sour, completely wiping the slate clean in my mouth for the next dish. 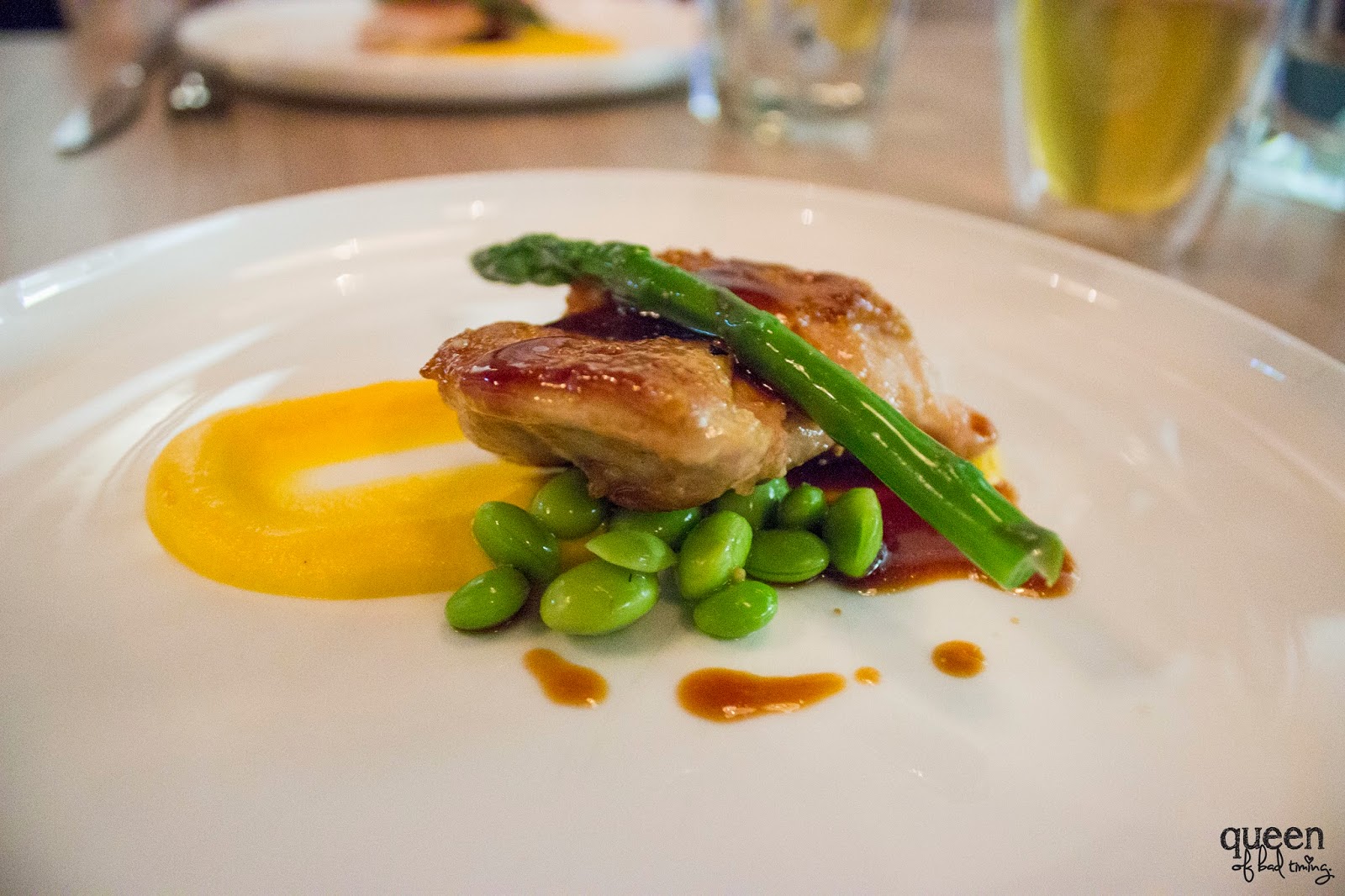 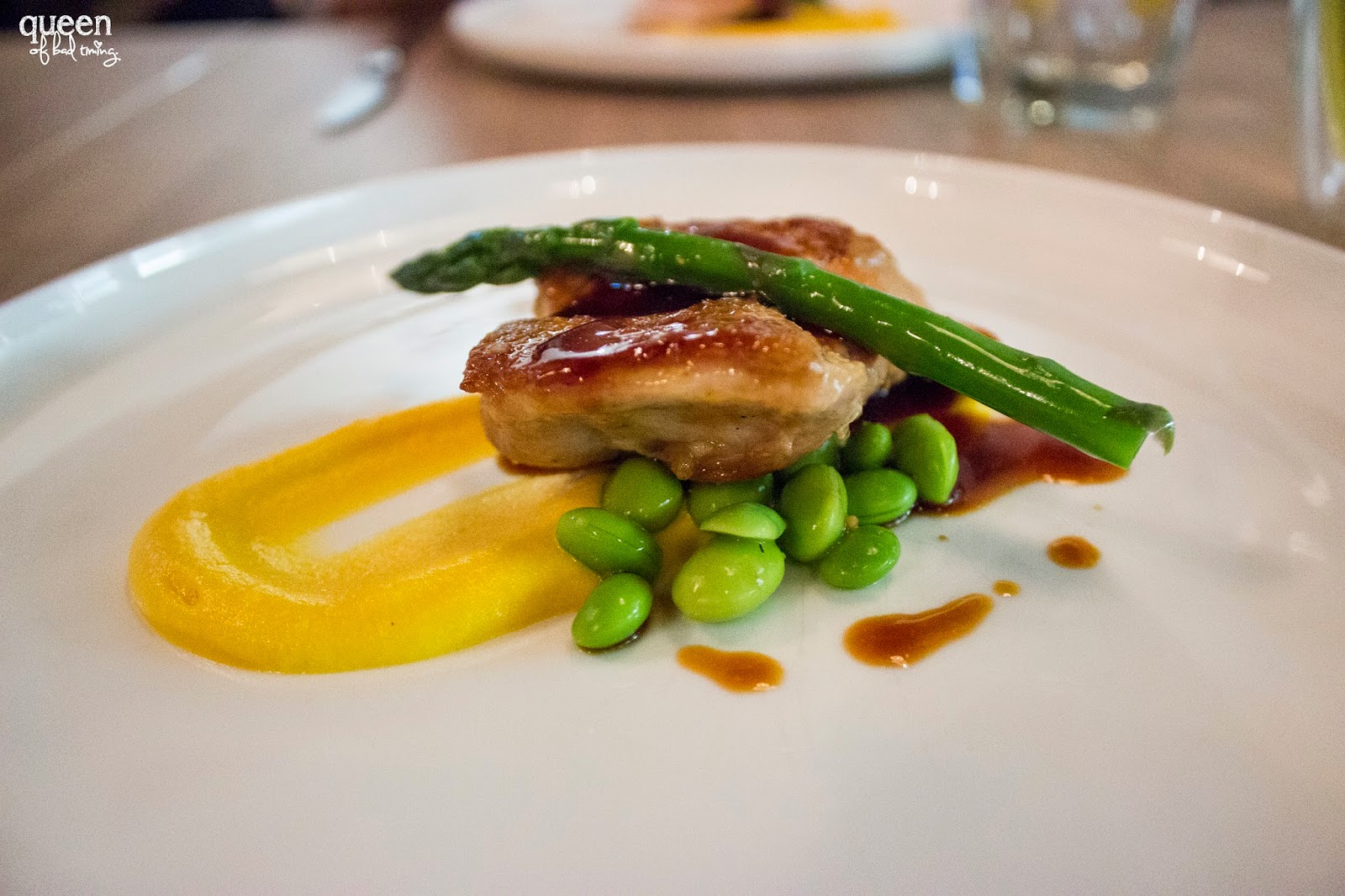 Our second last dish for the evening is Mount Barker chicken with pumpkin puree, edamame and asparagus spear. This was a dish that was stacked against the odds since my family isn’t one that tends to eat chicken often. But using the thigh meat was the first right move, the next cooking the meat spot on. It’s succulent, juicy and has a nice crunchy skin that is well seasoned, and sweet from the teriyaki like sauce.
The pumpkin puree is extremely buttery, working in harmony with the freshness of the greens. I love how all the colours on the plate pop! And while initially I’d worried that there wouldn’t be enough food during the meal, this plate was enough to fill me up though probably wasn’t quite enough for my boy. He said he was fine but I think he would have liked maybe one more course to get him to a properly sated position. 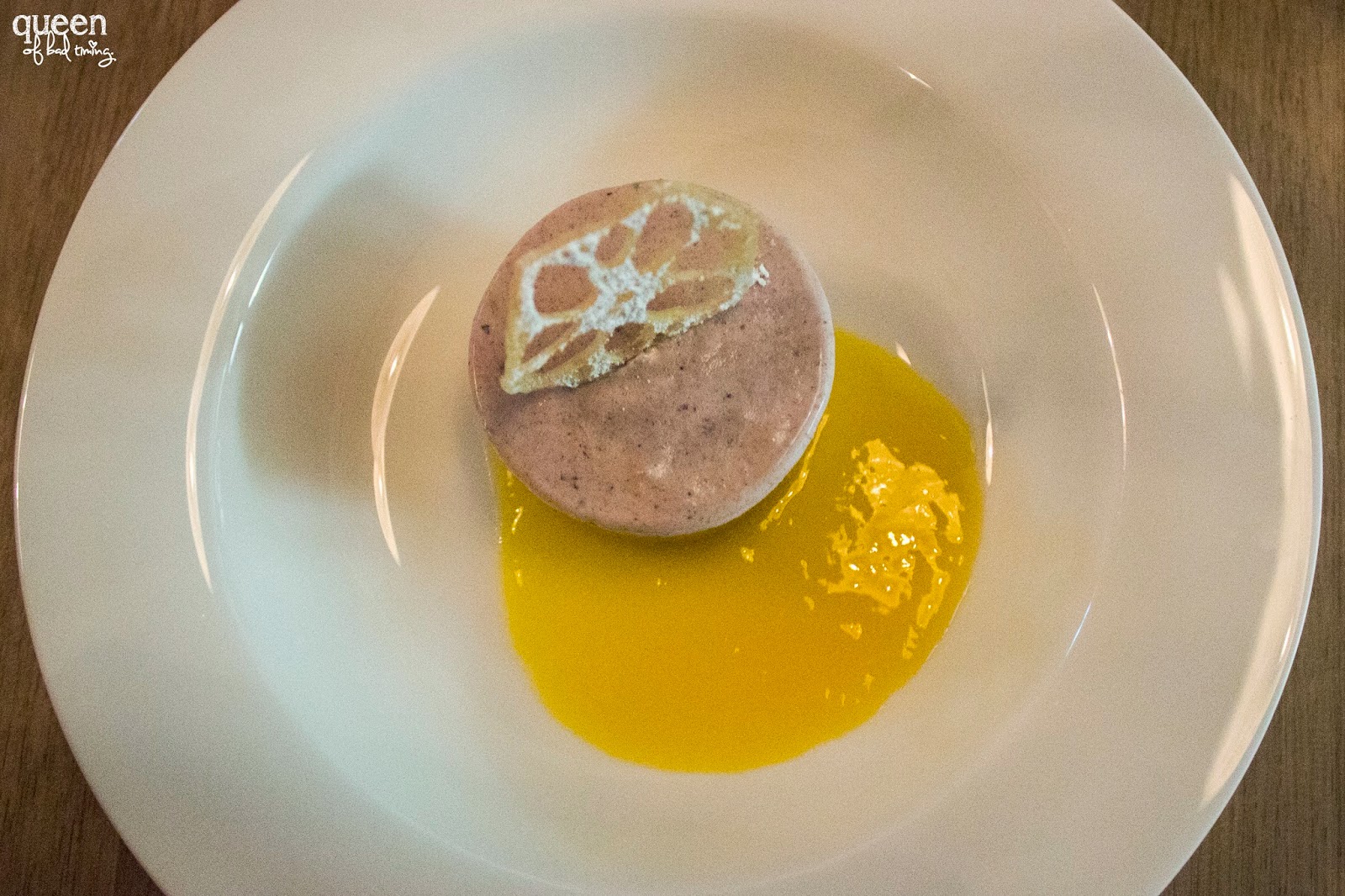 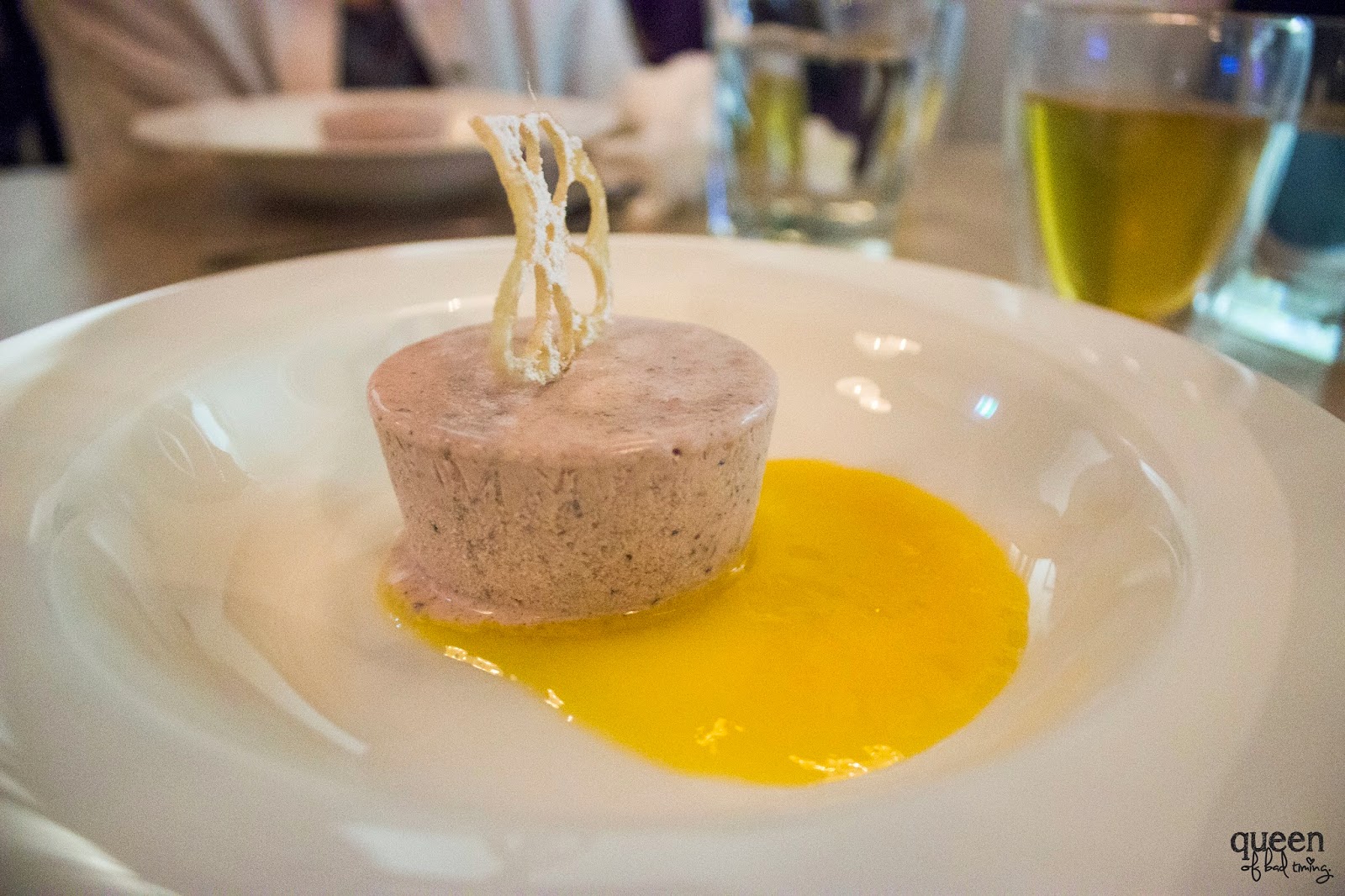 The dessert served at Marumo was simple and pretty – black rice parfait with a crisp lotus root chip and sweet early season mango sauce. I’m not a mango person (shocking I know!) but the others tell me that it’s so tasty, and really highlights what they consider to be one of the best fruits around.

The black rice parfait is really inventive – soft ice-cream with nutty rice grains throughout. Like most Asian desserts it’s not too sweet and it’s just the right size serving. 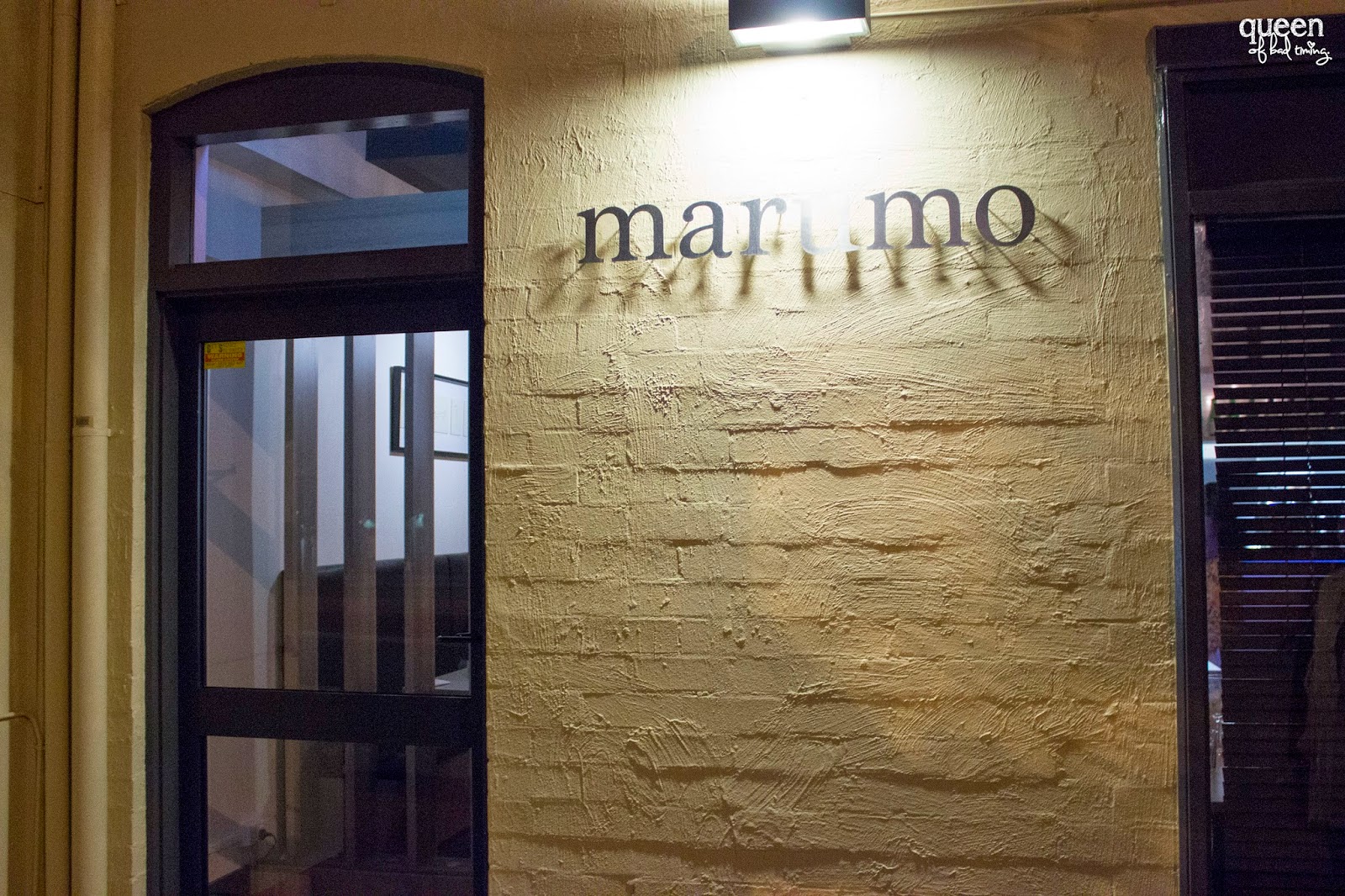 So what did we think of Marumo after waiting so long to visit it? Well obviously, we loved it! At $55 per person it’s not only great value, but there’s some great skill and finesse in the cooking and presentation that you won’t find at other Japanese restaurants in Perth (for that price in particular!). The service was spot on all night, with our water and tea constantly kept full, and while I would have liked the courses to come out a bit faster (we were there over 3 and a half hours), the timing is definitely understandable given the size of the kitchen and the skeleton staff they operate on.

I’ll definitely be keeping an eye out on the first Monday of each month to think about paying them a return. It’s a lovely little hideaway restaurant and a place I definitely recommend others to try.

Eclectic, tasty and oh so Kitsch